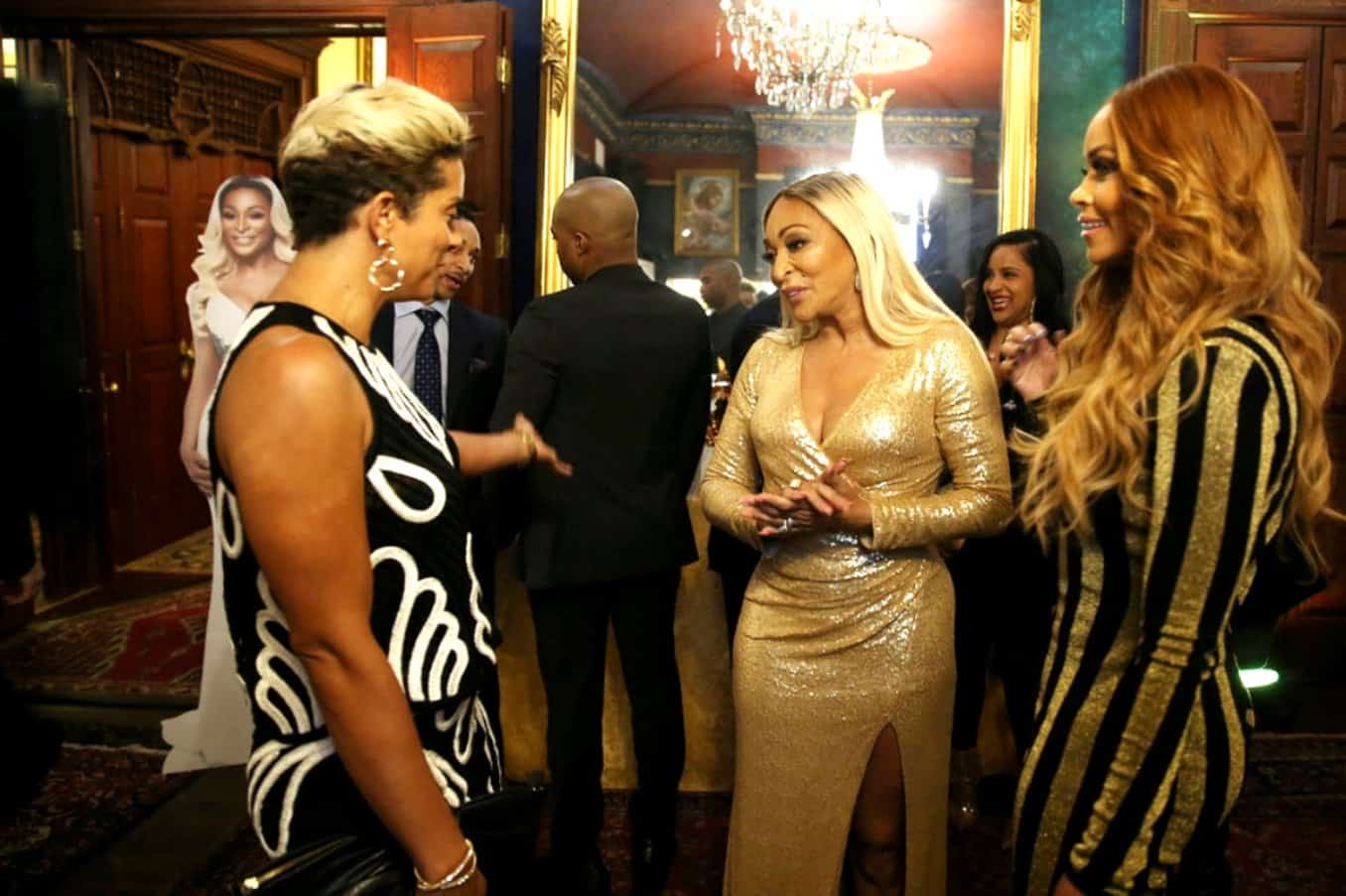 Season four of The Real Housewives of Potomac came to a close last night.  While it lacked some of the usual dramatic flourishes we’re used to when it comes to finales, it was clear that each of the ladies was on the precipice of some pretty major life changes.  But you know what?  It was also clear that each of them had a pretty happy ending, and that was nice to see.

For starters, that pregnancy test that Ashley took at the end of last week’s episode turned out to be positive! She and her husband, Michael, even went for an ultrasound.  The couple (and we viewers) got to listen to the little one’s heartbeat.  Ashley was told that she was about six weeks along, and she was given a due date of July 2.

Ashley couldn’t wait to share the amazing news with her mother, Sheila, and she chose to do so with stickers plastered to her still-flat stomach during a yoga session.  However, that plan failed when the stickers lost their adhesive, so instead, she opted for placing the positive pregnancy test right in her mother’s hand.  A tad gross?  Perhaps, but Sheila certainly didn’t think so.  She was overjoyed to become a grandmother, and she, Michael, and Ashley hugged gleefully as Ashley declared that they were finally a ‘real family’ now.

Speaking of mothers, Candiace was looking to break some of the control her mother, Dorothy, has over her life (it’s about time!) by finally taking over the mortgage on the home she shares with her husband, Chris.  Dorothy said she was happy for Candiace, but then in the next breath she wondered aloud if her daughter was actually just trying to ‘compete’ with her.  Candiace insisted this wasn’t the case, and she said she simply felt that an extra $1200 a month was a small price to pay for ‘her freedom.’  Hear hear!

Gizelle had her heart set on making changes to her living situation as well.  She’s already purchased her dream home, and last night, she was busy cracking the whip on the contractors so she could finally move in and stop paying two mortgages.

As for the other half of the “green-eyed monster” duo, Robyn was moving on, too–with her ex-husband, Juan.  The two have been working on their relationship for the last two seasons, and they decided to make it official last night, kinda.  They, along with their two young sons, went to get tattoos, so that the world would know it was official.  Both got two tiny hearts inked onto the inside of their ring fingers.

Juan, being quite the gentleman, allowed Robyn to go first, stating that he was a bit nervous about getting inked. This made Robyn a bit confused as she cited the fact that Juan already has SIX tattoos on his body!

Still, Robyn, who has never met a hint from Juan that she wanted to take, proceeded to call Gizelle to show her, and she seemed less than impressed.  Gizelle said that no one else would know they were there unless they knew to look for them.  She hoped that Juan would come through with a larger, more recognizable show of his commitment sooner, rather than later.  But, for once, she kept her thoughts to herself (or at least didn’t share them with Robyn) and simply said how happy she was for her friend.

Karen was also starting something new–her much-anticipated women’s fragrance line, La Dame, which she unveiled to the world with a lavish party.  All of the ladies were there, and they all seemed to approve as they tested the merchandise.  Karen was especially glad that Gizelle, her biggest naysayer, was there.  Karen ended the evening by thanking her supporters and her haters, and she mentioned Gizelle, although not by name.  She simply eluded to the constant “questioning” along the way that had helped keep her ‘on track.’

While the ladies praised Karen’s new fragrance during the launch party, Gizelle, who doesn’t know when to stop with the jokes, proceeded to throw some major shade at the Grand Dame, claiming the perfume smelled like something women over 50 would love. Something tells me Gizelle would be upset if anyone proceeded to disparage her Every Hue makeup line… but I digress.

Even Katie showed up to celebrate, and from the barely veiled shock on the ladies’ faces, it was clear they’d written her off after her disappearing act in the Cayman Islands.  But she looked good and well-rested.  Gone was that bizarre fright wig she’d been wearing during the trip, although she freely admitted to not having bothered with a shower, or even with deodorant, before stepping out for the evening.  Baby steps.

Ashley played it cool throughout the evening.  She chose not to share her big news, as it was still early, and the ladies hadn’t exactly been supportive of her and Michael this season.  When Gizelle and Robyn noticed that Ashley was drinking water and not her ubiquitous Corona, Robyn asked if she was pregnant.  Ashley said she was simply doing an ‘overall detox.’  But they weren’t buying it for a second–especially Gizelle, who suspected a financial motive to Ashley’s condition.  She said that the five-year mark on the Darbys’ prenup was near its expiration date, and that Ashley needed to “slide that baby right on in” before it was too late. Leave it to Gizelle to be so blunt!

A month after the party, Monique gave birth to her new bundle of joy, a son she named Chase.

Two months later, Candiace sent off her very first full mortgage check–but apparently it didn’t help to improve her relationship with Dorothy.  The two women stopped speaking, and they now only communicate through Chris.

In better news, Robyn sold her investment property, and she turned a tidy profit of $36,000. She’s also looking forward to a bright future with Juan.  Not to be outdone, Gizelle moved into her new home around the same time–and moved on with an as-yet named old flame who is rumored to be her ex-husband Pastor Jamal Bryant!

A month after that, Ashley threw her baby shower, and the finale came to a close with pictures of her beautiful baby boy, Dean!

But not to worry, viewers, the party’s not over.  We still have three installments of the RHOP reunion to get through–and based on the previews, those couches are gonna get pretty hot. This is especially true for Michael, who will have plenty of questions to answer about that cameraman scandal! Stay tuned…