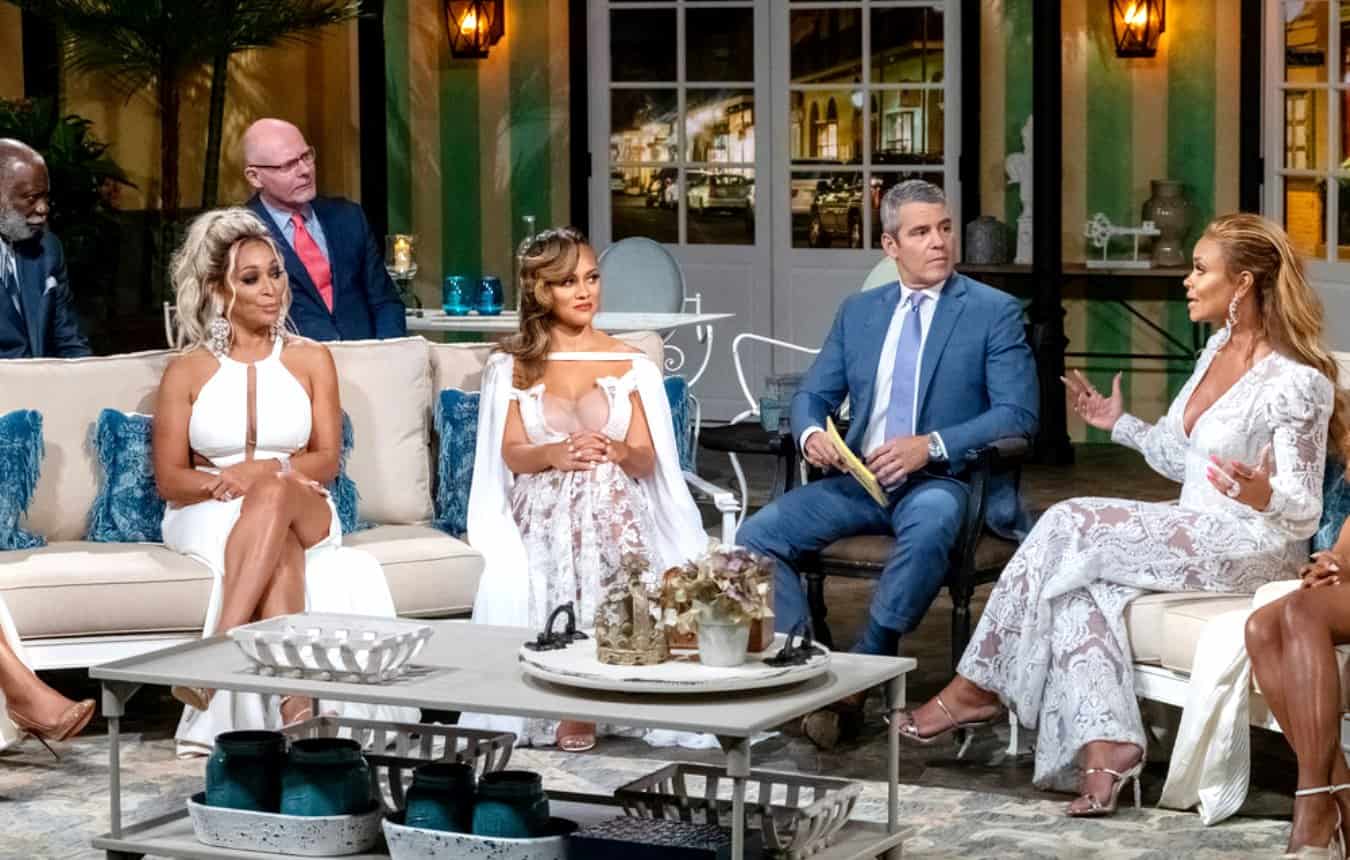 Season four of The Real Housewives of Potomac came to a close last night with the third installment of the reunion special.  The men joined their ladies on the couches, and while that’s usually a light-hearted and quick segment (except for those Jersey guys) of the reunion specials, the men of RHOP dominated the entire episode.  Well, at least one of them did!

We finally heard from Ashley’s husband Michael about those butt grabbing allegations, and as I’m sure most of you predicted all along, he was full of um, well, excuses and justifications.  For starters, he said that the cameraman hadn’t filed charges, but he had made a “claim” against him and that the “claim” had been dropped.  Furthermore, he stuck with his story about simply bumping into the cameraman accidentally.

But why would the man say ‘don’t do that’ if he’d simply been “bumped into.” That’s not a normal reaction, is it?  They were at a party, after all.  It was crowded.  People bump into one another. Candiace’s husband, Chris, also pointed out that Michael got awfully combative when told ‘not to do that’ when the normal response would have been more along the lines of ‘excuse me.’  But that’s Michael’s story, and to his credit, he did not waver.

As for the other butt grabbing incident a few years back with Katie’s ex-husband, Andrew? Well, that was just a ‘friendly butt tap between two men,’ according to Michael.  Men do that ‘all the time,’ he said, likening it to the congratulatory pats you often see if sports.  Robyn’s ex-husband, Juan, and Monique’s husband, Chris, both former pro athletes, didn’t quite seem to see the similarity.  But okay, Michael, whatever you say.

And Michael’s final justification for his inappropriate behavior?  He’s from a different country.  Apparently in Australia people just go around grabbing the backsides of random people and everyone’s fine with it.  Good to know!

Michael also tried deflecting onto the others members of the cast.  He told the women that they should be “ashamed” of themselves for ‘what they did.’  He didn’t clarify exactly what he meant, but he seemed to be referring to the fact that they talked about the incident almost incessantly throughout the season.  And Michael’s not wrong about that–they talked about it.  But in their defense, it was the juiciest thing to happen Potomac in years! Besides, this wasn’t idle gossip, either.  This was a criminal complaint, and therefore, a matter of public record.

Michael and Ashley also appeared on Fox Five, a local news program, to discuss the allegations.  And they wanted these woman to keep their mouths shut?! Psssh–that was never going to happen! Especially not with Michael and Ashley, who have both consistently kept their noses in the other cast members’ business since the day they started the show.

Gizelle and Robyn both mentioned that the allegation made by the cameraman wasn’t a one-off.  And even if you believe Michael’s story about tapping Andrew in a playful, “guys will be guys” sort of way, other members of the production staff had said that Michael had been inappropriate with them as well.  Michael flat out denied this, even when Gizelle said that she told him to ‘stop it,’ something Michael said he didn’t even remember.

At this point, Karen spoke up.  As a sexual assault survivor herself, she mentioned the uneven power dynamic that is often at play in situations like this.  She said the cameraman had been brave to come forward.  She encouraged others to come forward, as well, and to know that there’s often footage or eyewitnesses to back them up.  Michael simply told Karen he didn’t care about her, or what she thought.  Karen said she didn’t care about him either, but she wanted to speak out on behalf of victims.  Ashley said that while there certainly were a lot of victims, there were also ‘plenty of people who were just trying to extort money’ from the people they made allegations against.  Somebody take her woman card, please!

Michael’s other scandal of the season involved the comment he made during the party for Ashley’s uncle, which involved him about ‘wanting to ‘suck another man’s d***’–namely, Juan’s.  When it was brought up last night, he went after Robyn with a vengeance, saying she was ‘too drunk to stand up,’ much less remember a comment he made.  When Andy mentioned that Robyn hadn’t been the only one who heard it, Candiace started to jump in to back her up.  Michael shot her down too, and he said he ‘didn’t even like talking to her,’ so she wasn’t even close enough to hear anything he would have said.  He then said he should have filed charges against her for pulling a knife on his wife.  It was a master class in deflection.

As for the “questions” about Michael’s sexuality, he said that it shouldn’t matter, and he’s right about that.  But those questions and the allegations that caused them surely embarrassed his wife, and the ladies wanted to know why Michael had never apologized to Ashley for what he put her through.  Michael said he had nothing to apologize for because he hadn’t done anything.  Ashley, of course, continued her Tammy Wynette act.  She continued to stand by her man, agreeing that no apology was necessary–except for from the other women, whom she said handled the situation badly and didn’t even call to check on her.  But why should they check on her if nothing happened? Hmmm–interesting.

In the end, the ladies still didn’t believe Michael’s story.  And, for the record, Karen’s husband Ray also didn’t believe him, especially after hearing that Michael joked about grabbing his behind when he was talking to Juan about making up with him.  He also said that he’d seen Michael grab another man’s butt on another occasion. And shockingly enough, that man was Bravo’s own Andy Cohen!

Andy played coy and claimed he didn’t quite remember Michael grabbing his butt during a past reunion. But later on his other show, Watch What Happens Live, Andy said he was reminded that the incident took place by other producers of his show and insisted that he had truly forgotten about it. Michael, however, denied this grab as well, but he’d better stay away from Ray’s goodies because he warned him that he’d ‘punch him in the mouth’ if he ever got any ideas.  He also pointed out ‘cultural differences’ again, and he said that he guessed people in America just ‘didn’t want to be friends.’

It was pretty intense, but the drama continued after the men took their leave, following some hushed sidebar conversations on their way out.  This included one between Michael and Gizelle, during which he continued to scold her for not ‘respecting’ his point of view. (Point of view?! Either these things happened or they didn’t!)  There was also another conversation between Michael and Ashley, during which she commended him for his performance on the couch, and then warned him that they were ‘still mic’ed,’ indicating that he should not comment any further.

Finally, it was time to put an end to the nonsense–and the season, which was filled with plenty of roses, like the birth of two beautiful babies, a wedding, and business successes for the ladies.  It also had plenty of thorns–fights, knives, and Michael—so much Michael.  And in the end, the ladies toasted to all of it with champagne and hugs.  That’s a wrap, folks, and ladies, don’t stay gone too long–we can’t wait to see what happens next!