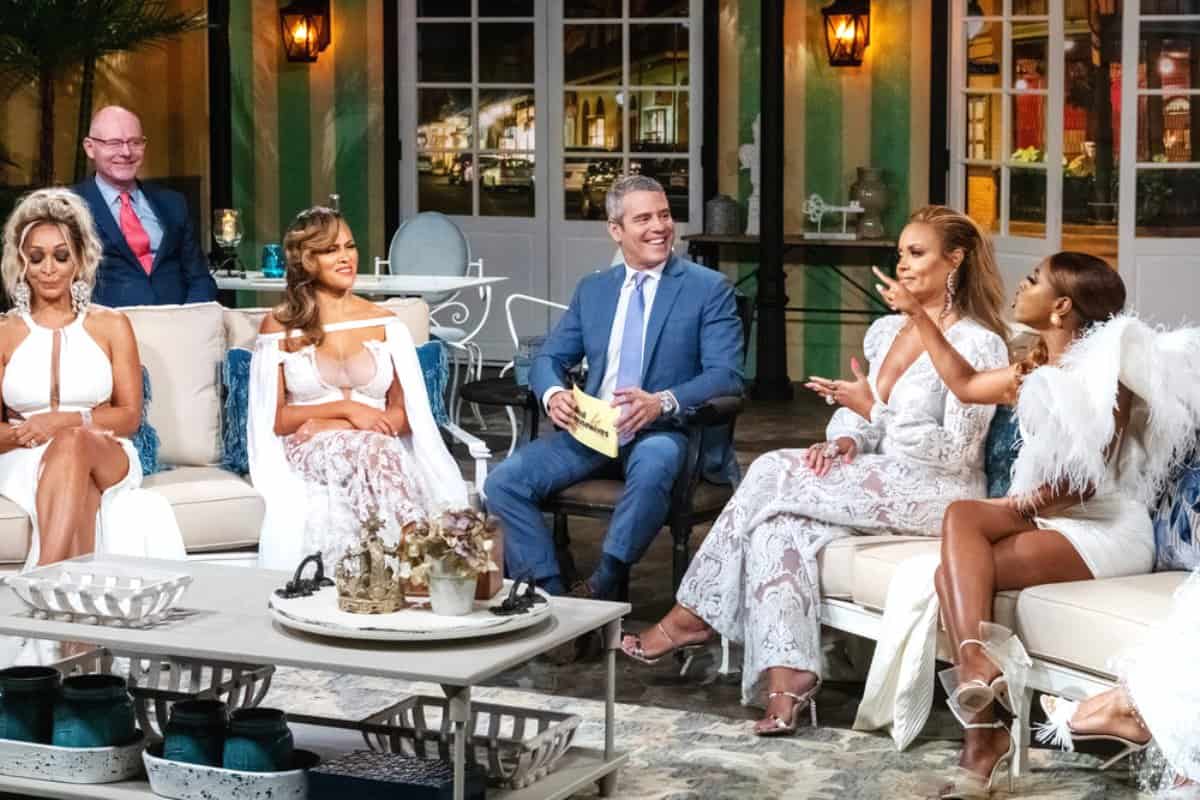 The ladies of The Real Housewives of Potomac returned to the couches last night for part two of the season five reunion, but while the previews for the episode seemed to promise maximum drama–i.e., Michael Darby joining them to discuss the sexual assault allegations against him, we will have to wait one more week for that showdown.  That does not, however, mean that last night’s installment didn’t bring its own fireworks.  The ladies had plenty to discuss before the men joined the fray.

For starters, there was the question of what went wrong between Candiace and Monique.  They seemed to be besties in the making at the beginning of the season, but they were definitely on the outs by season’s end.  The reason for the rift seemed to be the rekindled friendship between Monique and Ashley, which left Candiace feeling like Monique had climbed over her to get to Ashley.  And perhaps that’s exactly what Monique did.  After all, did she really have to show Ashley the text messages she’d exchanged with Candiace, in which Candiace had laughed and joked about Michael’s predicament?

Definitely not, but Monique maintained that she was just making sure Ashley knew that she hadn’t been laughing along with Candiace, or any of the other women.  Candiace, of course, said Monique wasn’t all that innocent, and that just because she wasn’t joking during that one text exchange didn’t mean that she hadn’t made her fair share of snide comments about the situation.  The other ladies agreed, and they said they actually felt that Monique had thrown them all under the bus by telling Ashley that ‘everyone’ had been talking about it.

And what of Monique’s comment about the whole ordeal being karma coming back to bite Ashley on the backside for what she’d done to her last season, and all the trash she talked about her so-called friends in general? Well, Monique said that was different because she’d just been “stating facts.”  Ashley said that she didn’t care for Monique’s karma comment when she’d first heard it, but that she was willing to overlook it in light of all the kindness and support Monique had shown throughout the whole debacle.

Throughout all of this, the rest of the RHOP men were arriving to have their say on the season.  This was the perfect opportunity for Andy to turn the conversation to Robyn and her on-again relationship with Juan.  She said that ‘as far as she knows’ they are 100% monogamous.  During the season, they got the tattoos to prove it, but Gizelle still wondered when Juan was going to “put a ring on it.”  It seems Robyn and Juan’s sons are wondering the same thing.  They just recently found out, via Google search, that their parents were divorced, and have since been asking if they’ll ever get remarried.  When asked whether things were headed in that direction, Robyn said that Juan ‘had to propose first,’ but she predicted he’d be getting down on one knee ‘within the next year.’

Robyn also revealed that they were in a better place financially. This was thanks, in part, to her flip house and the tidy $30,000 profit she turned when she sold it–no thanks to Gizelle and the scene she caused when she chose to confront Monique during the open house.  Gizelle had apologized profusely, and she still ‘felt horrible’ about it.  Robyn said she believed Gizelle when she said she’d never do such a thing again. But Robyn advised Gizelle to think about her actions and how she’d feel if the shoe were on the other foot in the future.

Gizelle made it perfectly clear that her apology only extended to Robyn and not to Monique, who’d been the target of her embarrassing tirade.  Gizelle explained that the confrontation had been “three years in the making” and needed to happen because of Monique’s constant trash talk about her over the years.  When asked who told her Monique had been talking about her, Gizelle said that Ashley had been the source.

But for once, Ashley actually hadn’t been trying to stir the pot.  In fact, she’d been trying to clear up what she’d felt was a “misunderstanding” between her two friends.  All she’d said was that Monique had told her that she felt that Gizelle didn’t really like her.  That’s hardly trash talk, and Monique told Gizelle that her reaction had been way over the top.  Gizelle admitted that she’d been “at 10” when she “should have been at 1.5.” It wasn’t exactly an apology, but it was the best Monique was going to get, and so she took it.

Gizelle smoothed things over a bit with Karen as well.  But who knows how long that will last.  Could it be that these two simply love to fight with one another? It certainly seems that way at times, but while Karen said they were ‘good sparring partners,’ she said that she doesn’t enjoy all the fighting at all. In fact, she said that she’s a “darling” who’s perfectly “innocent,” and she simply returned the serve when “messy pants” Gizelle lobbed it across the net.  But these two have been friends for years, and their rivalry goes back to the Jack and Jill “cookie bake.” Both agree they’ve had some great times together and hoped to have many more in the years to come.

Finally, it was time to discuss the elephant in the room, or rather the elephant sweating through his dress shirt as he listened from an adjacent room.  That’s right–Michael, who happened to be the one subject most of the women could agree on.  The ladies still don’t believe him, and the fact that the charges were dropped is not the same as exoneration in their eyes.  A line was drawn in the sand when the Bravo cameraman accused Michael of groping him, and the ladies have clearly come down against Michael.

Really, can you blame them? After all, this is not the first time Michael has made inappropriate comments or advances toward another man.  For starters, the ladies said that when he grabbed Andrew’s butt three years ago, they’d been told by many of the other producers that Michael had touched them inappropriately too. Ashley said this was all news to her, but each of the other women had heard all about it.

Of course, Ashley doesn’t always share what she knows–at least not about her own life.  It was revealed last night that when the ladies had told Ashley what Michael had been overheard saying about wanting to perform a certain sex act on one of the other ladies’ men, she’d already known about the allegations the cameraman had made, and the timing made the rumor seem all the more cruel.  But it really hadn’t been a rumor.  It had been a fact, and Robyn, Candiace, and Chris had heard it with their own ears.  The only question was which of the men he’d been lusting after.  Robyn finally revealed, to the surprise of absolutely no one, that it had been Juan.

Ashley couldn’t understand why the other women had needed to repeat it, but they all said that they had been acting in Ashley’s best interest.  They said that they felt talking that way was disrespectful to Ashley, whether he’d been talking about a man or a woman.  They all agreed that they’d been disappointed that Michael hadn’t publicly apologized to his wife when they were interviewed on a local television show.  But Ashley remained steadfastly on Michael’s side.  She said that the allegations against him weren’t true, and therefore he had nothing to apologize for.  We’ll see!

The men have some pretty strong feelings about the subject as well, and we’ll finally hear from them next week, including Michael.  It’s about to get good, viewers–stay tuned!