Are 90 Day Fiancé: Before the 90 Days’ Zied and Rebecca Still Together? Find Out Now! 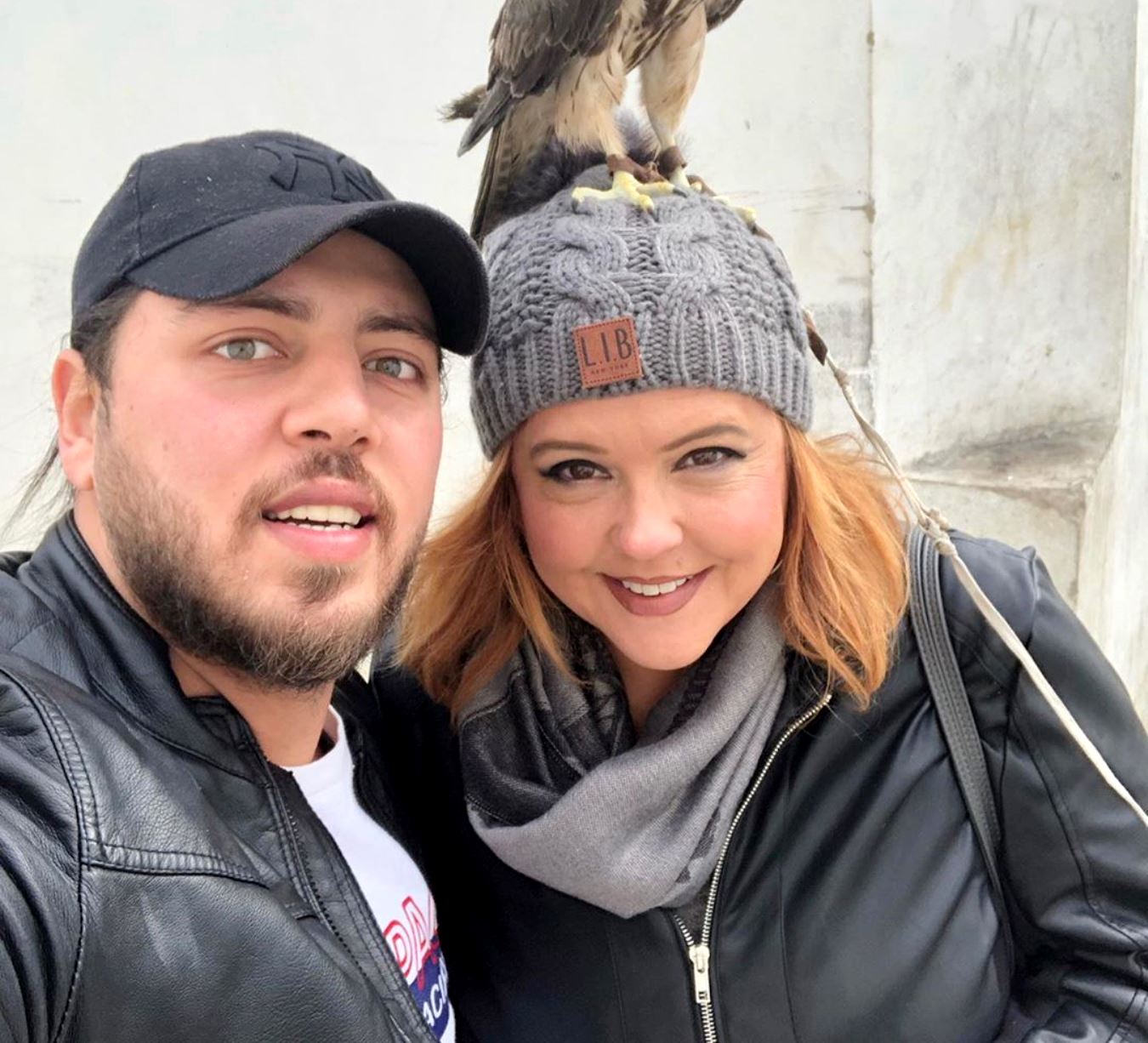 Do 90 Day Fiancé: Before the 90 Days stars, Zied Hakimi and Rebecca Parrott have a strong enough relationship to stand the test of time? Read on to learn if the two love birds are still together today.

The world was introduced to a handful of characters when season 3 of the hit reality show aired back in August. And while many of the show’s couples seemed less than promising, fans learned pretty quickly that Zied and Rebecca were head-over-heels in love with each other (who could forget those framed photos and mugs with Zied’s face on them?).

Rebecca is a 47-year-old woman from Canton, GA, and despite the fact that she works as a private investigator, she’s sure that her 26-year old boyfriend from Tunisia is in love with her without having any ulterior motives. But as fans quickly learned on the show, Rebecca was the one who was lying right from the get-go.

In an interview with PEOPLE, Rebecca revealed that the reality stars initially met on Facebook. Zied sparked Rebecca’s attention because he made it seem like he lived in Lafayette, Louisiana on his profile. However, the 47-year-old learned later that he actually was from Lafayette Province in Tunisia. But at that point, she claimed to have fallen in love with Zied and couldn’t leave him be.

Before officially meeting, Rebecca and Zied would video-chat online and send pictures to one another on a regular basis. While Zied’s pictures seemed to be unaltered, Rebecca used the many available filters out there to her advantage. In other words, she was making herself look a lot younger than she actually appeared to be in real life.

But Rebecca was no stranger to long-distance relationships like these. She admitted on the show that she dated a man from Morocco in the past, but after bringing him to America, she quickly realized he was just using her to get into the States. But despite her friends and family’s warnings — and the fact that this has literally happened to her before — the TLC star decided to trust the man who lived across the world and continue on with the relationship.

Eventually, Rebecca made the big trip to Tunisia where she finally met Zied face-to-face. The two seemed to have chemistry right away but it didn’t take long for them to feel the massive cultural differences between them. This was especially apparent during one night out on the town when Zied insisted on telling his American girlfriend to dress more modestly in order to cover up her tattoos and not draw male attention. Zied even picked a fight with one gentleman at a hookah bar who was looking at Rebecca.

But after arriving in Tunisia, Rebecca teased audiences in her one-on-one camera scenes that she had a massive secret she had yet to tell Zied: she was still married. According to a report in Starcasm, the reality star’s 5-year-marriage to her Moroccon husband was filed in May but hadn’t been finalized yet and in that time, she had begun filming (the divorce was finalized officially in July). The man reportedly got to America thanks to a spousal visa and still resides in Georgia, but not in Canton.

As fans can recall, Rebecca was forced to make nice with Zied’s conservative parents and his judgmental sister over two of the most awkward dinners ever. No one could seem to wrap their head around why a young man like Zied could be so fond of this older American woman.

In a more recent episode, Rebecca revealed to Zied that she was actually in a relationship with another woman many years back. This is frowned upon in Zied’s culture and he seemed quite taken aback. However, Rebecca assured him that this was a past relationship and she was no longer pursuing other women.

Having so many secrets herself, it’s no surprise that Rebecca was curious about what Zied was hiding. That’s why Rebecca had her coworker back home run a background check on her boyfriend but it revealed no criminal activity or anything of that sort. However, his paperwork didn’t show any sign of previous employment. “It doesn’t list a job. Under jobs, it is completely blank like he’s never worked a day in his life,” Rebecca’s friend and coworker reported on the show. “I just hope he’s not planning to come here and live off you.”

Up until this point, Rebecca was under the impression that Zied worked in television as some kind of audience coordinator for local television shows. Rebecca sat down and had a talk with the 26-year-old in last week’s episode, making it clear to him that he couldn’t just use her as a way to have more opportunities in the U.S. He seemed to have understood.

While we have yet to see how Zied will react to Rebecca’s news about still being married, it appears that the couple is still very much in love today. You don’t have to scroll too far on Zied’s Instagram page to see that he’s still in a relationship with the woman who’s just over twenty years his senior. 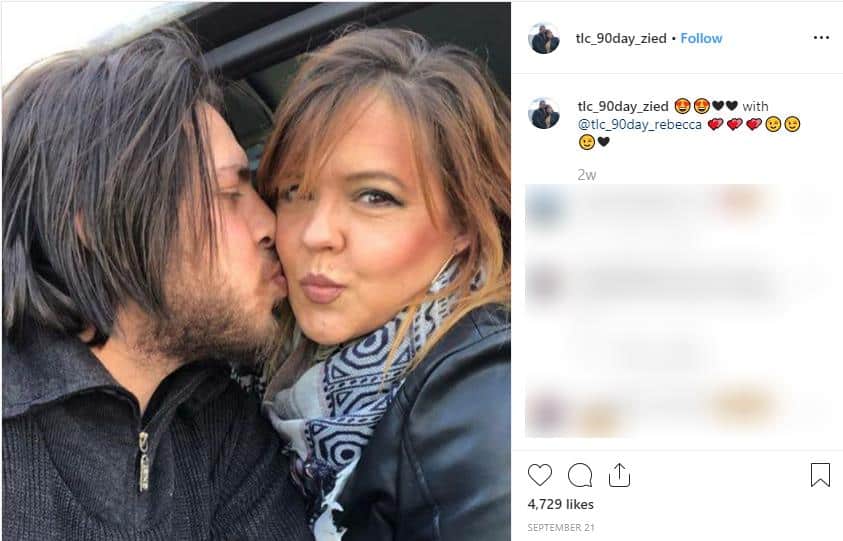 90 Day Fiance: Before the 90 Days couple Zied and Rebecca are still going strong according to Zied’s Instagram page

And Rebecca’s Instagram page is no different. Along with having a picture of her and Zied as her profile picture, the reality star also posts about her relationship from time to time.

“It was risky to kiss in public, but sometimes the sunset is just too perfect.” the TLC star wrote alongside her romantic photo on September 21. “This was by the 2000 yr old Medina in Hammamet ????☀️????♥️ #sunsetkiss” 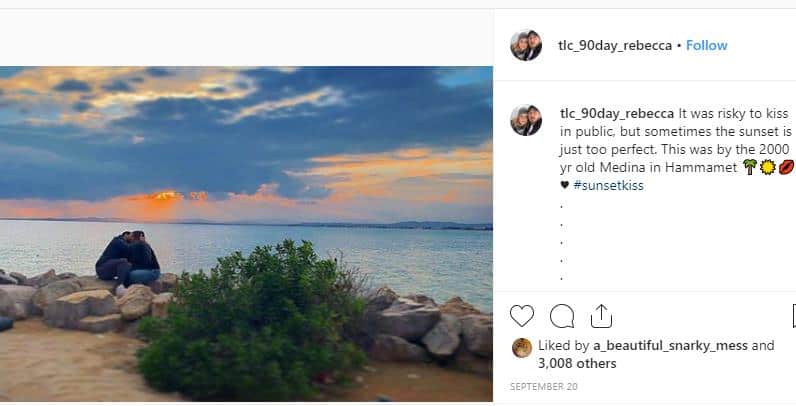 And as if their Instagram accounts weren’t convincing enough, Rebecca’s son appeared to spill the beans on Reddit just after season 3 aired three months ago. According to a report by Reality TV World, the Reddit user took to the site to answer fans’ questions about the show.

“I hope I [don’t] get in [trouble] for saying this, but [Zied’s] actually a surprisingly nice guy,” Rebecca’s son blurted out on the Reddit thread. “I really wasnt [sic] expecting much after the [Moroccan] (I was told not to say his name). I lived with her when she brought him to America. He and I had major issues and I moved out, but Zied has been great. He messages me frequently asking about my son, who was in the hospital.”

This comment made it sound like Rebecca’s son was still in touch with Zied after filming, meaning he’s still involved in her family’s life. Her son also revealed other fun tidbits about the show in the thread, admitting if certain scenes were scripted and explaining more about Rebecca’s ex.

While the couple appears to still be together, we have yet to learn how Zied will react to Rebecca’s secret about still being married on the show.

Wondering about some of the other couples on the show? Find out if Jeniffer and Tim are still together and if Angela and Michael are still going strong.

Tune into new 90 Day Fiancé: Before the 90 Days episodes every Sunday at 8 P.M. on TLC.