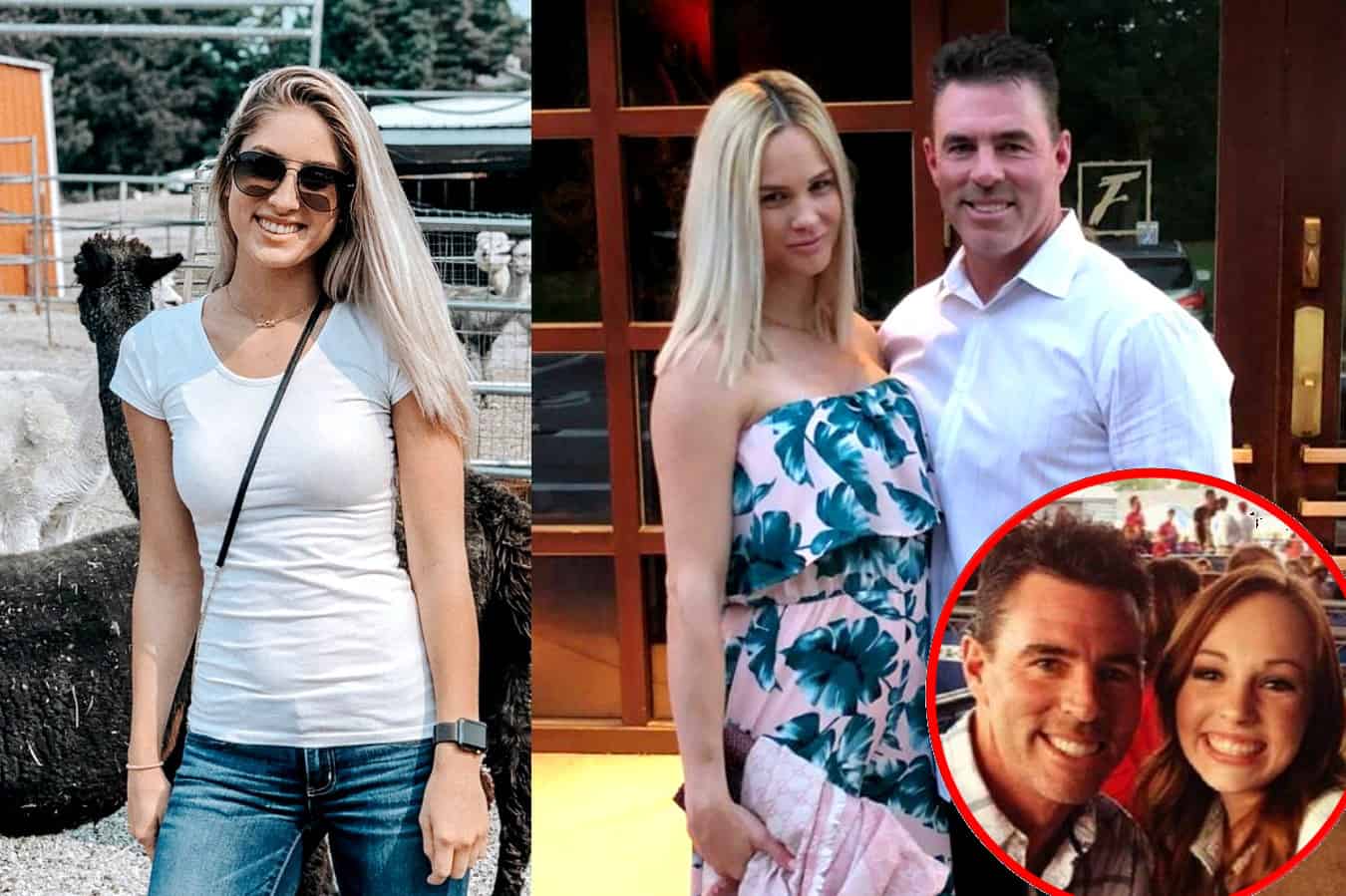 Meghan King Edmonds‘ nanny, Carly Wilson, has shared another message with her online audience in regard to the cheating allegations aimed at her and Jim Edmonds.

After initially telling a fan on Instagram that the affair claims against her and Jim were “completely false,” Carly returned to her page with a message requesting kindness. Jim’s daughter, Hayley Edmonds, also slammed the Real Housewives of Orange County star for her “disturbing” allegations against Jim and Carly, who were photographed together days before Meghan’s claim was made.

“In the past week, allegations have been made about me which are not based in fact,” Carly, 22, wrote on October 28. “I have not and never would participate in any action involving infidelity. I consider this a private matter in someone else’s marriage and will not comment on it further. I wish the entire family well.” 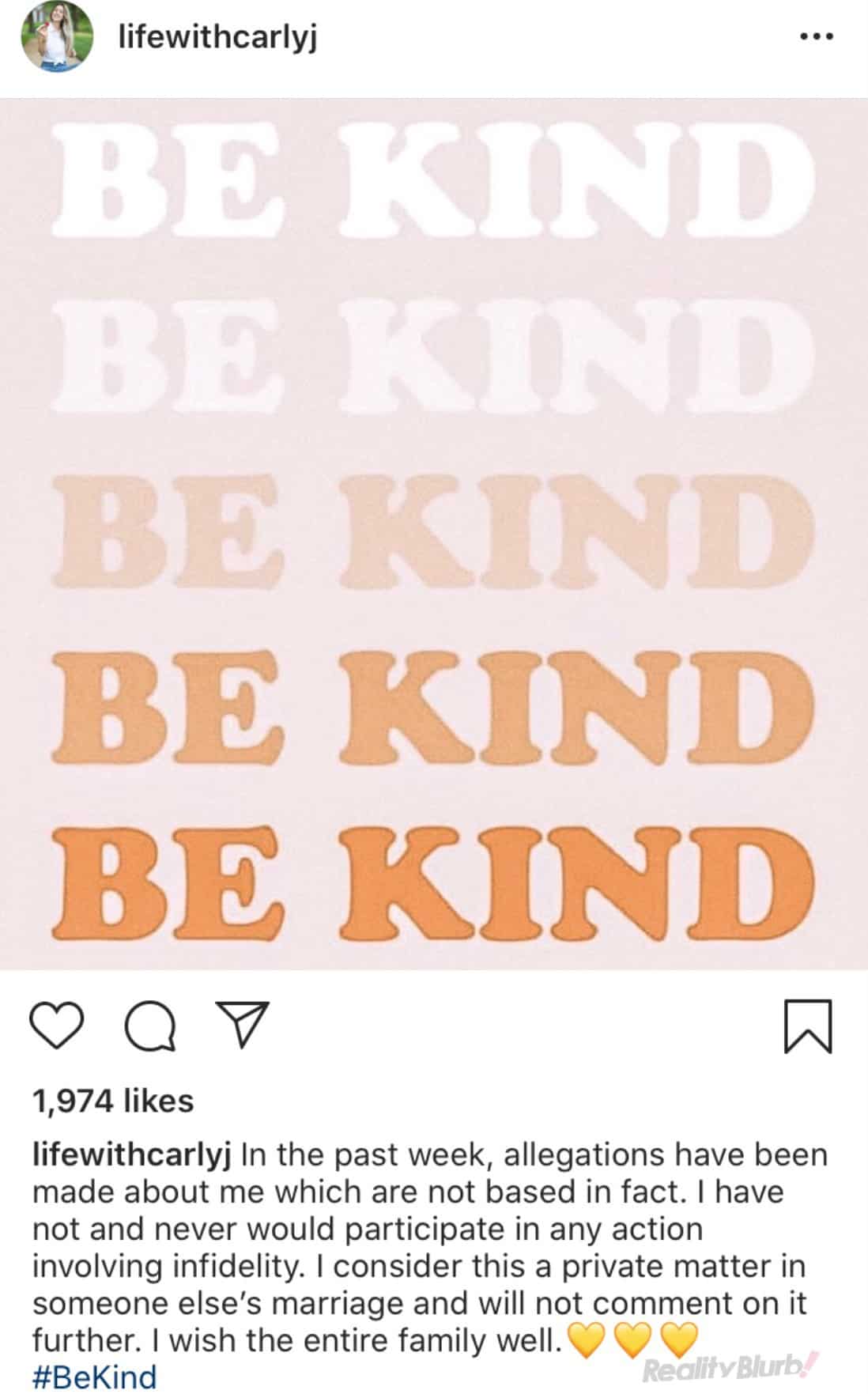 Meghan’s affair allegations against Jim and Carly were first shared on Instagram, and shortly thereafter, his daughter, Hayley, defended the two of them against the reality star’s claims.

Hayley also spoke out against Meghan during an interview with Us Weekly and admitted that she’s been hoping to see her father file for divorce for about three years.

“I think it’s impossible to be happy with someone so … I don’t know if I would say narcissistic but, she, like, creates her own problems and loves conflict and things like that,” Hayley, 22, explained. “The selfishness is miserable for anyone to be around, let alone to be married to her. My whole family has grown closer because we have all had to stay silent in hopes to protect my dad and no one can do it anymore.”

“The way Meghan treats my dad’s mom is disgusting. And we’ve all just had to sit quietly and I’m just done with it,” she continued.

According to Hayley, Meghan portrayed her as “stupid” on RHOC and accused her of causing trouble for her mother, LeAnn Horton, who passed away after a battle with cancer in 2015.

“I got so much scrutiny from the way that she portrayed me like I was stupid and I didn’t care about anything,” Hayley said. “In reality, like, I dropped out of high school to take care of my sick mother and she came in and completely manipulated me to get on the show and told me I was making it harder on my mom to be there and I was giving her anxiety and I needed to live with Meghan and give my mom less stress.”

Although Hayley’s relationship with Meghan has been strained for years, she and her sister Lauren have always had a “good relationship” with Jim’s ex-wife, Allison Jayne Raski. Meanwhile, Meghan has gotten on the bad side of many, including Hayley’s grandmother, who she actually blocked on Instagram.

“It’s a bummer. Because my grandma just wants to see pictures of her grandkids and she had to get them sent to her every day. It just really bummed her out. That really sucks,” Hayley explained.

Hayley then addressed the “disturbing” allegations against Carly.

“They’re family! They’re just young girls that are just trying to work and be positive and be happy and enjoy their job. And the way she stepped over the line is just completely disrespectful and it’s just absurd,” Hayley told the magazine about her family’s staff. “Especially the way that she treated Carly is mind-blowing to me because she holds herself to very high moral standards and she is a great girl who moved to St. Louis across the country because she loves those kids.”

“I’m stoked that I can have my dad fully back and not have to tiptoe around [Meghan],” Hayley concluded. “Everyone that cares about him is proud that he finally took the leap of leaving her.”

Although both Jim and Carly have denied their alleged affair, PEOPLE confirmed on October 28 that they were seen spending time together at a hockey game just one week ago. In a photo shared by a Bravo fan page on Instagram, Jim and Carly sat beside one another wearing hoodies and dark baseball caps, possibly in an attempt to stay under the radar.

After Jim’s divorce filing last week, the couple appeared to unfollow one another on social media as Jim also removed a birthday tribute to Carly from his page. In the now-deleted post, he had celebrated the nanny’s birthday by telling his fans and followers she is an “amazing young woman and a great addition to our family.”