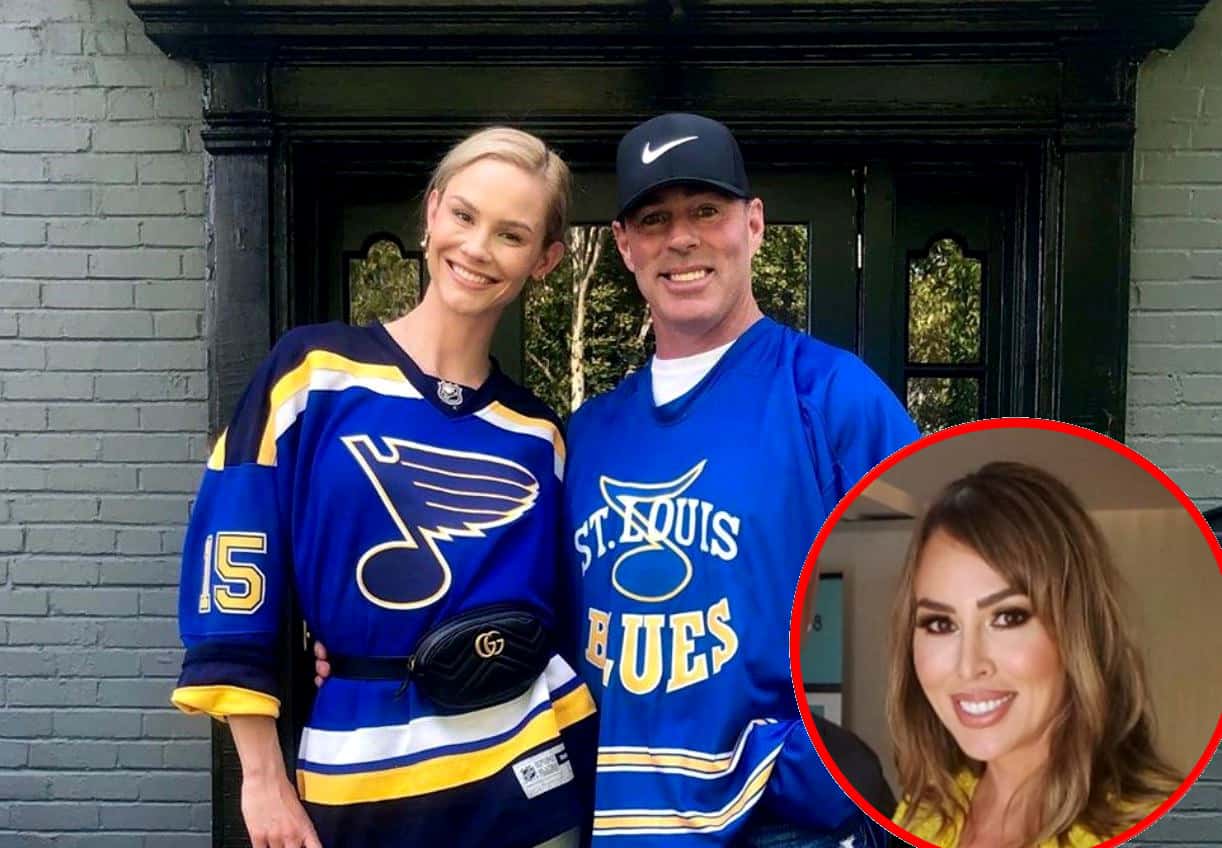 Jim Edmonds is breaking his silence just a day after news broke that he filed for divorce from his wife, former Real Housewives of Orange County star, Meghan King Edmonds.

The nanny that Meghan is accusing Jim of having an affair with is also breaking her silence, as she denies any such thing, plus Kelly Dodd is commenting on the couple’s split.

Earlier today, Jim took to his Instagram Stories to share a quote, hours after Meghan shockingly accused him of having an inappropriate relationship with their nanny.

“No one can throw a bigger tantrum than a narcissist whose losing control of someone else’s mind,” read Jim’s quote which has since been deleted. Below is a screenshot as captured by Reality Blurb. 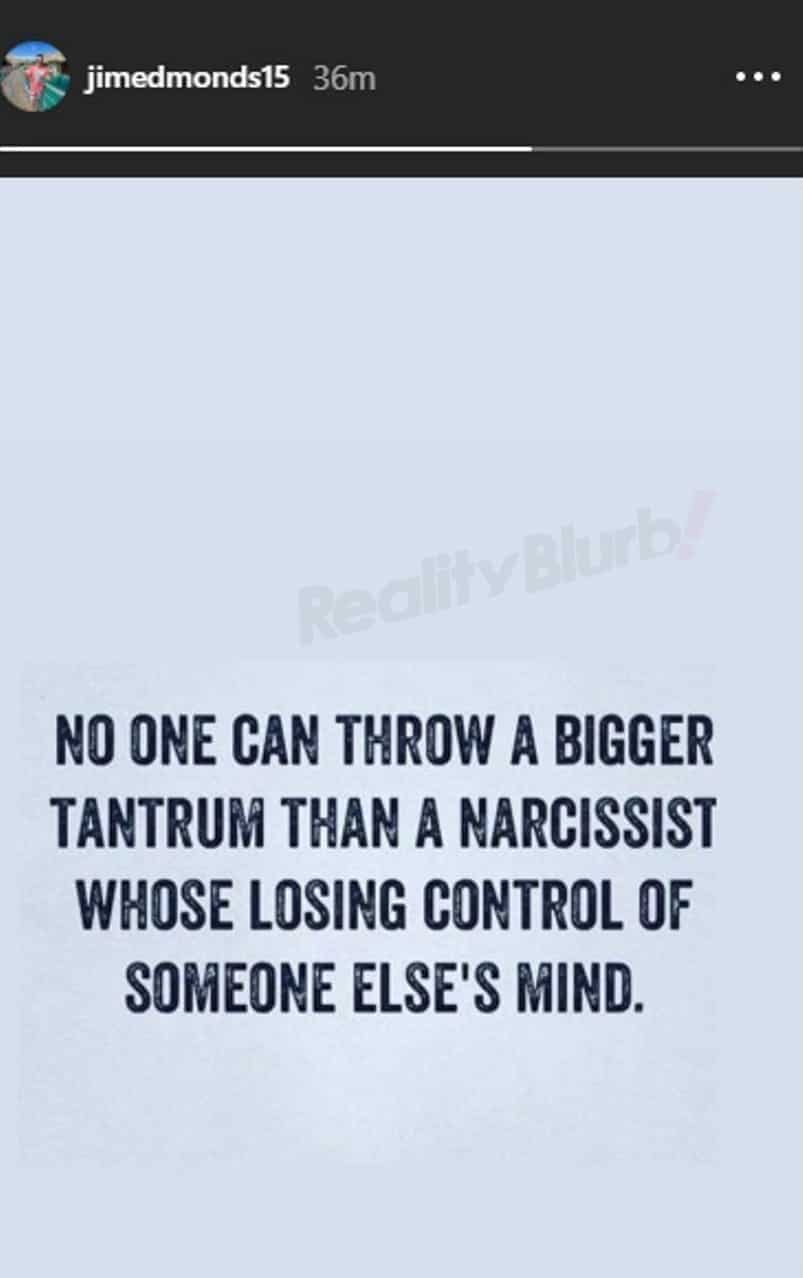 Yesterday night, a report came out from Us Weekly stating that Meghan had accused Jim of having an affair with one of their nannies in a heated fight during which cops were reportedly called. And then this morning, Meghan seemingly confirmed the claim when she gave a thumbs up to a fan who mentioned the allegation about Jim and the nanny named Carly.

However, Carly is now breaking her silence and in a comment on her private Instagram page, she denies any inappropriate relationship with Jim.

“The allegations are completely false,” wrote Carly on October 26 when asked by one of her followers if she had anything going on with Jim. Below is a screenshot as captured by CommentsbyBravo. 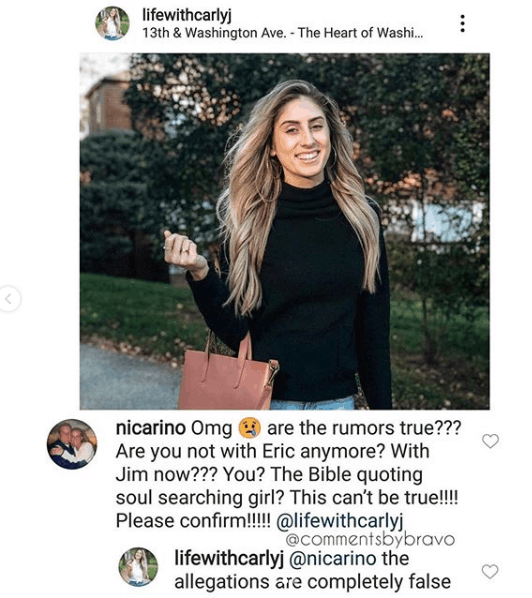 Meanwhile, Jim has since deleted an Instagram birthday post he dedicated to Carly from his Instagram page in which he commended her for being a good nanny to his kids alongside several photos of her. He made the post in November 2018. Below is a screenshot of Jim’s post as captured by the BeautifulSnarkyMess Instagram page.

Kelly, Meghan’s former RHOC co-star is also commenting on the split as she all but says I told ya so. As RHOC fans are aware, Meghan and Kelly have a rather long history of not getting along.

“I said it and called it at the reunion… after she was calling me out for having an affair… funny how these housewives like to pass judgement.. they need to clean their own houses,” Kelly wrote under a post by the TwoJudgeyGirls Instagram page on October 26.

And last but not least, many RHOC fans are pointing out that Vicki Gunvalson appears to have accurately predicted that Meghan’s marriage would end in divorce as during a feud with Meghan on the show, Vicki famously told her: “Talk to me in 5 years when you’re divorced.”

As widely reported, Jim’s divorce filing came just a day after he and Meghan celebrated their fifth wedding anniversary. In an interview this week with the Daily Dish, Meghan mentioned she and Jim marked their anniversary by shopping for Halloween costumes and visiting their marriage counselor.

News that the couple was in marriage counseling isn’t much of a shock as just back in June, Jim was caught up in a sexting scandal after the text messages he sent to another woman were leaked online. Jim publicly apologized to Meghan back then as he admitted to a “lapse in judgement.”

Meghan and Jim, who got married back in October 2014, share 2-year-old daughter Aspen and 16-month-old twin boys, Hayes and Hart. Jim also has other kids from his previous marriages.