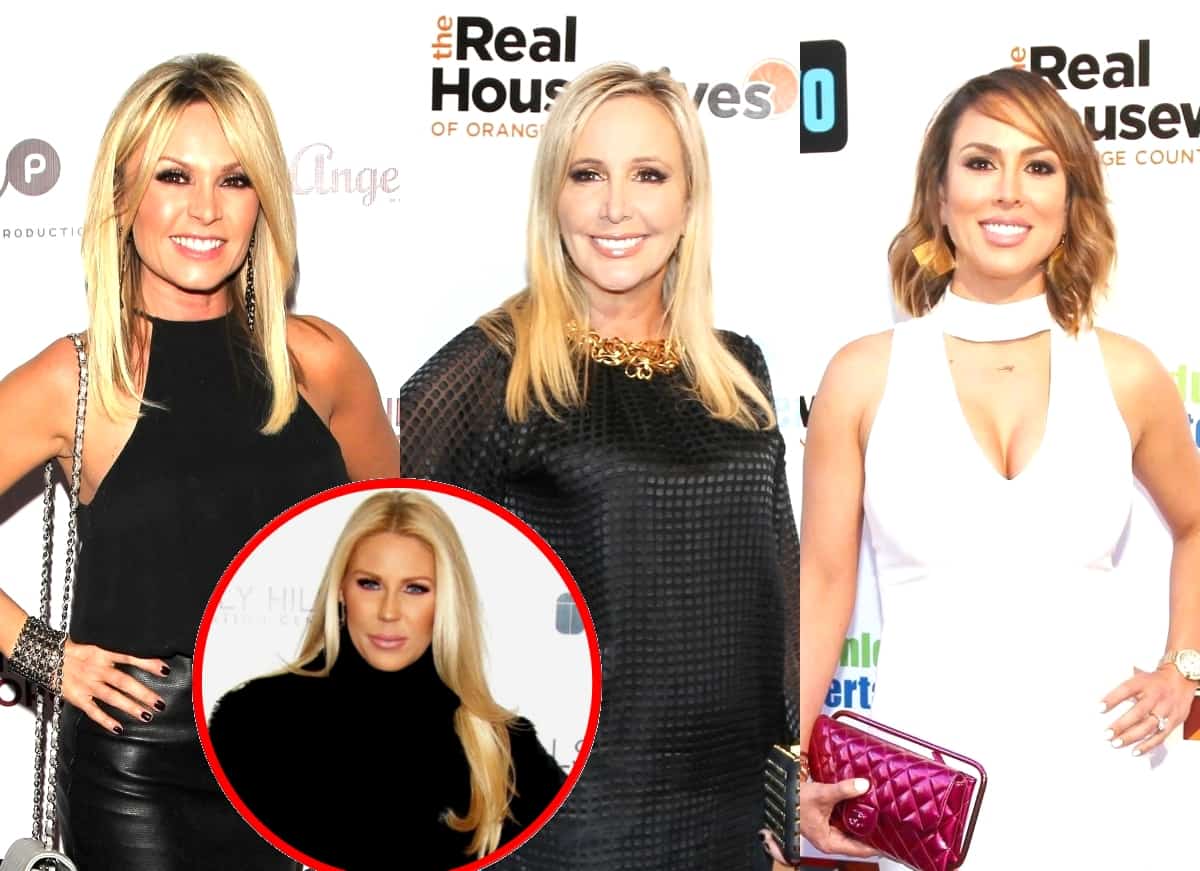 The Real Housewives of Orange County star Tamra Judge is blaming ‘bad editing’ and ‘lies’ after she was seemingly busted trashing her friend Shannon Beador on the latest episode of the show.

On Tuesday’s episode, some of the housewives speculated that Tamra was stirring things up to pit them against each other after she accused Braunwyn Windham-Burke of gossiping about Kelly Dodd at Vicki Gunvalson‘s birthday party. However, fans came to realize through flashbacks that this wasn’t quite the truth.

Then, later in the same episode, Shannon was shocked to learn that her closest friend on the show was actually talking negatively about her behind her back and commenting on her weight gain — according to Kelly. Even more, the following text messages were shown during the episode, which show Tamra making fun of Shannon and implying she overreacted to Kelly hitting her on the head with a mallet. 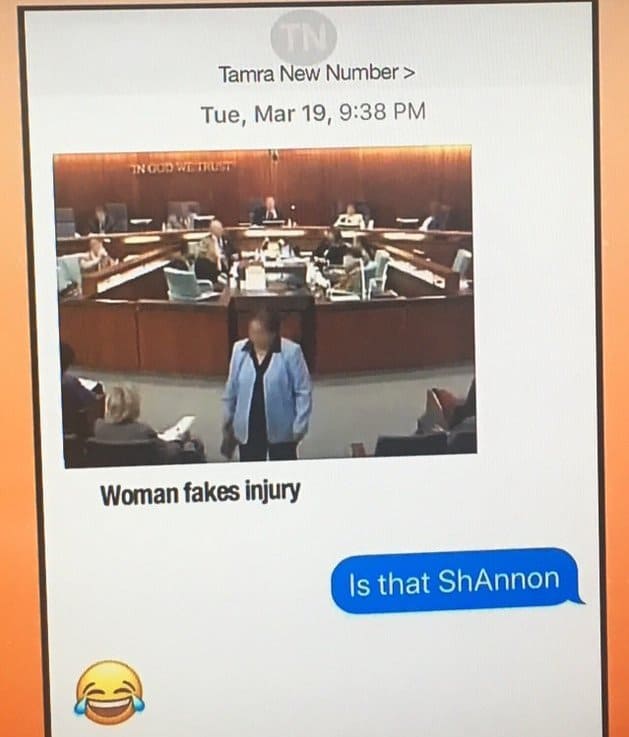 Tamra is now attempting to defend herself as she insists she is not a backstabber. First, she posted a meme on her Instagram amid the airing of the new episode, causing fans to wonder if she really is stirring the pot for drama’s sake.

“#RHOC TONIGHT” Tamra wrote alongside a meme that read: “Thank God for all the gossip and backstabbing our co-workers provide for our entertainment. Otherwise work might start feeling like actual work.”

However, the post was met by plenty of disgruntled fans who were disappointed in the reality star’s behavior.

“That was bad Tamara…” one fan wrote in the comments. “Why? You are better than that… you have some apologizing to do!!!”

Another fan responded to the post, asking how she could betray Shannon, one of her best friends.

“I didn’t. It’s editing and taken out of context. I’d never talk bad about shannon.” claimed the Bravo star. 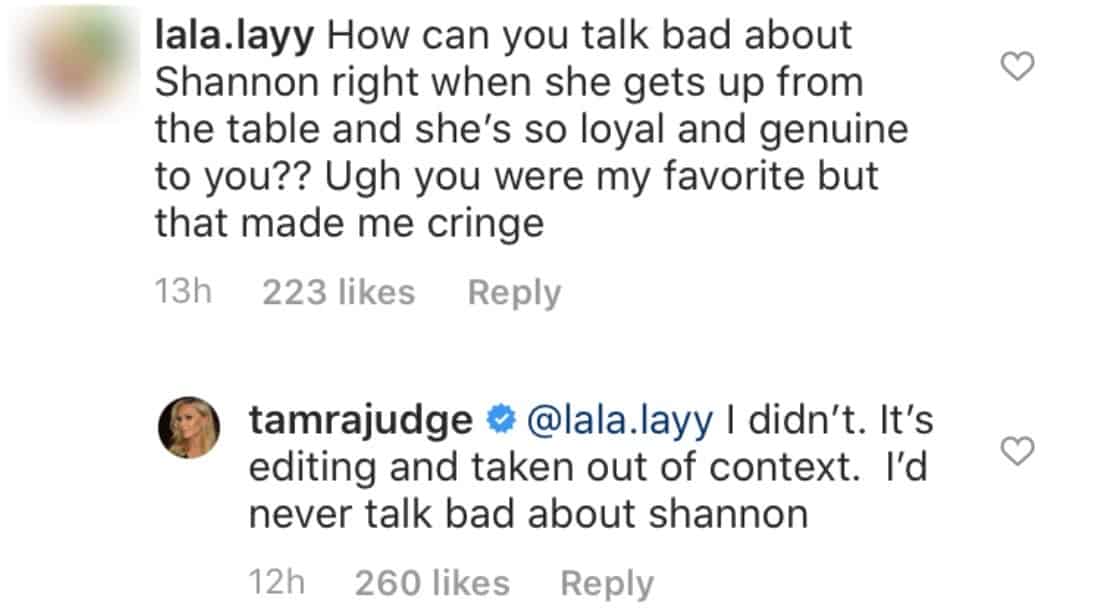 Along with Tamra, Kelly also posted on her Instagram Tuesday night, asking fans what they thought about the episode.

“Many fans DM’d me telling me I had to watch tonight’s episode because everything I have said for years about Tamra finally comes to a head, and it was nice to actually see everyone in the cast recognize what this [woman] has done for years, all the lies, manipulation, false perceptions, and the friendships she has purposely torn apart etc.” Gretchen wrote candidly. “Too bad it doesn’t last and she is able to spew her poison once again and manipulate the women into believing it’s not her manipulating everything. 😏 Proud of you for standing up and speaking your truth about her.” 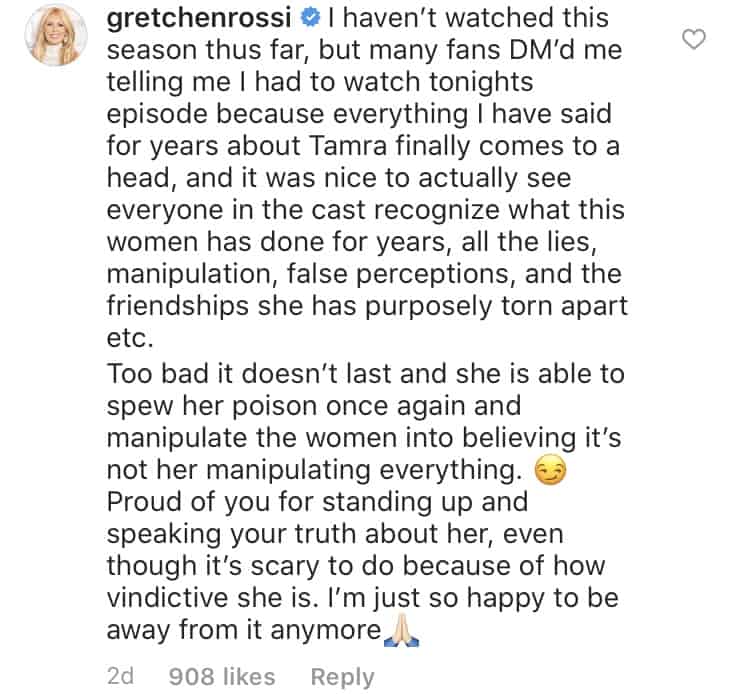 As fans can remember, Tamra and Gretchen rarely got along on the show and continue to shade each other in their individual interviews and appearances.

Watch new episodes of Real Housewives of Orange County every Tuesday at 9 p.m. on Bravo TV.