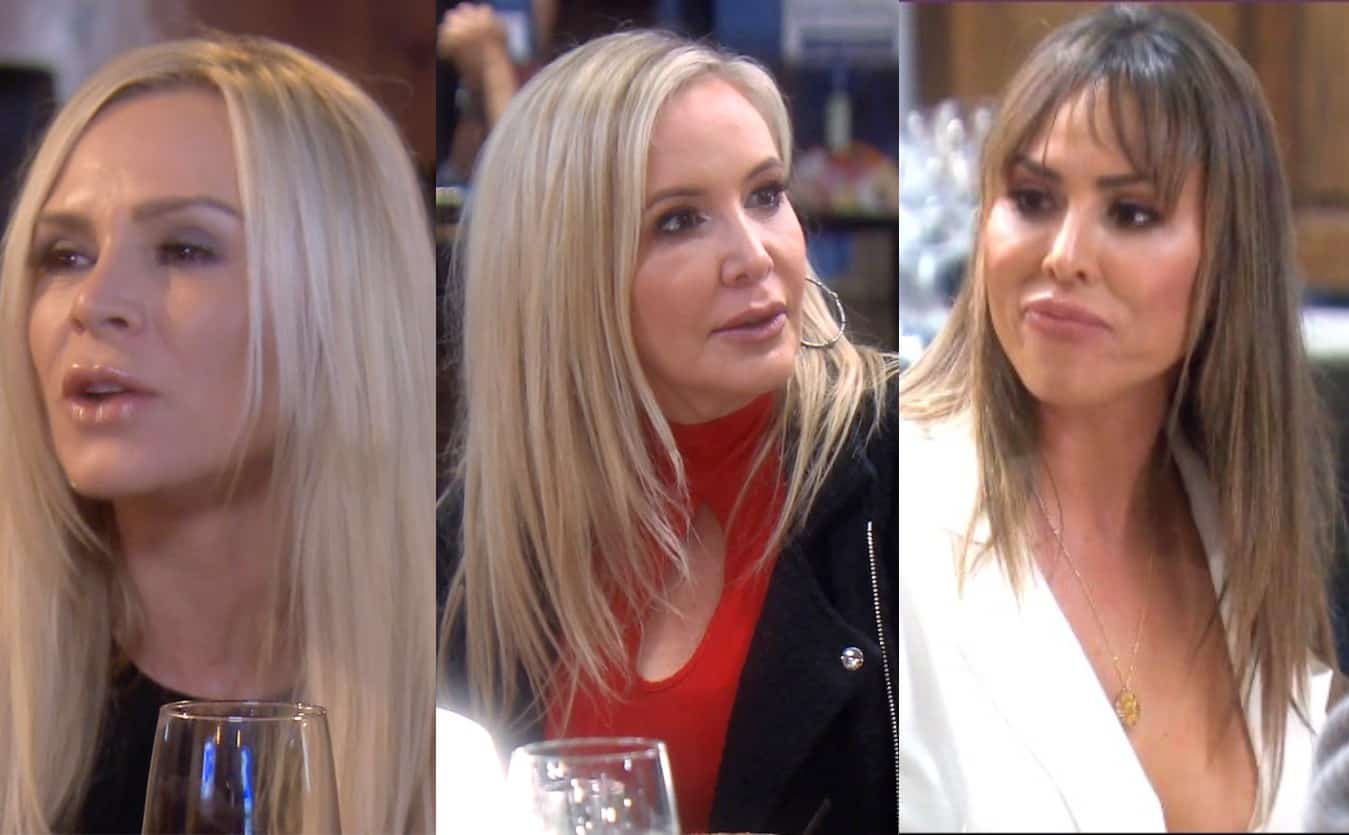 On this episode of the Real Housewives of Orange County, we find out the hard way who can and cannot be trusted…

Everyone’s favorite duo, Tamra and Shannon, are still harping on the way Kelly spoke of Vicki. To catch you up, Kelly said the only party she would go to is Vicki’s funeral…but it’s hard to defend Vicki because she spits out low blows about Kelly all damn day. Tamra is finding it hard to pick a side and I am unclear as to why it matters IF she even DOES pick a side. Man, these ladies really love the drama. The women are on their way to lunch so they can confront Kelly about this debacle.

Gina goes to visit her therapist and comes clean about sleeping with her husband. The therapist looks shocked and appalled but still listens as Gina explains her reasoning and thought process. Gina shares that she is scared to leave Matt, but at the same time, she’s also scared to stay with him. She asks her therapist what she should tell Matt about her upcoming date because “Matt runs hot.” And it seems like Gina should probably just pay for another hour of therapy. It’s clear she could use some more time to sort out her manic feelings.

Shan and Tamra sit down with Kelly, and Kelly wastes no time. She comes right out with how Braunwyn called her post-tea party and told her that the women were talking smack about Kelly’s fight with her boyfriend, Dr. Brian. Shannon and Tamra look doe-eyed as they try to backpedal (it seems like their plan got thwarted for the time being).

Tamra, ever the pot-stirrer and clearly trying to take some of the heat off of herself, questions Braunwyn’s motives because, after all, she too, was talking sh*t about Kelly. Kelly looks confused and tries to clarify the situation by putting Braunwyn on the spot. Kelly straight-up calls Braunwyn, and Braunwyn denies bringing up Kelly’s fight with Dr. Brian.

Tamra hijacks the phone call and does her best to twist Braunwyn’s words and make her the bad guy. Cuz what else is Tamra good for? I kinda feel bad for Braunwyn. I feel like she was trying to make things better for Kelly by defending her at the tea party when Kelly wasn’t even there, but nevertheless, Tamra calls her “full of sh*t.”

Even though Tamra explains that she loves Kelly, she still needs to address Kelly’s delivery. Kelly freaks out, and when she finds out that Tamra has loose lips about her bar fight, she goes from furious to teary. She doesn’t appreciate Tamra spilling things she told her in confidence. Shannon attempts to explain that they all love Kelly, but they want to “see the best version” of her. The whole ordeal ends when Shan has to head off to her kids’ play…and wants to take a road soda with her. OMG. What just happened?!

Braunwyn and Emily are going paddle boarding. It’s really just a reason for Braunwyn to wear a bikini and remind the world that somehow her bod looks like that even after having 35 kids. Post boarding, Braunwyn tells Emily about the phone call she received from Kelly the night before. Emily believes that Braunwyn was honestly trying to “mitigate” the situation. Emily proceeds to give Braunwyn a pep talk and lets her know that she cannot back down. The girls plan to have dinner with Kelly to attempt to smooth things over within the group.

Shannon only gets to see her kids half the time, and therefore, she has decided to go see “Babe,” her “friend.” Shan chats it up with her daughters and we find out that she wants to randomly drug test them because ya know, teens, amiright? While on the topic of offspring, Gina takes her three kids for haircuts. The hairdresser can’t seem to get a comb through the daughter’s hair and the son seems to have forgotten manners. Gina gets upset about being a single parent and cannot seem to handle the kids. They tend to walk all over her and I have to imagine that it’s embarrassing to have all of this footage on film. Poor Gina.

It’s date night for Emily and Shane. I don’t even want to watch this segment because Shane gives me the creeps. He looks pained to be out to dinner with Emily, and Emily just struggles to keep the conversation alive. She can’t seem to get Shane to be serious about her weight gain and feels unsupported by him.

Emily attempts to get Shane on board with couples’ therapy, and he tells Emily that they “could save the therapy money and just be nice” to each other. This guy… He tells Emily that she should just go to therapy by herself, and that is def not what she wanted to hear. Emily cries in her confessional that she “doesn’t know what to do” and worries about the future of the marriage.

It’s the day of THE dinner…the one where Braunwyn is attempting to make things better with Kelly. Braunwyn is relying on Emily to share what really happened at the tea party, but when Shannon arrives, it may be hard. When Kelly begins to tell what she heard Braunwyn say about her (holy telephone), Emily jumps right in and shuts her down. Emily retells the whole scenario, and Kelly realizes that Braunwyn isn’t really the bad guy…instead…it’s Tamra who is stirring the pot. Shocker.

It’s beginning to surface just how much of a gossiper Tamra is. I mean, Braunwyn straight-up tells Kelly that Tamra was actually the one who started spreading the train rumor about her. Kelly is p*ssed that she trusted Tamra and calls her two-faced. Hold up–notice how quiet Shannon is during this time? Looks like someone is terrified of an angry Kelly Dodd.  Shannon throws in that she “doesn’t want negativity in” her life. When Shannon tries to interject and stick up for Tamra, Kelly drops a bombshell. She tells Shannon not to trust Tamra either, as Tamra has also talked “hours and hours” of sh*t about Shannon. Ouch.

In fact, just the day before, as Tamra, Shannon, and Kelly had dinner, Shannon got up to use the bathroom. During that period, Tamra trashed her to Kelly, claiming Shannon was out to get Kelly. Additionally, Kelly showed receipts in the form of text messages of Tamra joking about Shannon faking being hurt after Kelly hit her over the head with a mallet. But there’s more! Kelly also told Shannon that Tamra had spoken negatively about her gaining weight.

Shannon is puzzled, hurt, and confused. Kelly goes on and on and on about all of the horrible things Tamra has said about Shannon. Shan feels like the “wind has been knocked out” of her, and Kelly sort of loves being the bearer of bad news. It’s becoming very clear that Tamra is two-faced to Shannon, and Shannon is having a hard time keeping the tears from flowing in front of the ladies.

Kelly explains, “We got Vicki who’s a pig and Tamra who’s a snake.” Shannon cannot wrap her mind around the fact that her “friend” is capable of being so untrustworthy. So, she decides she needs to have a sit down with Tamra and find out the truth…Good luck navigating that.