Vanderpump Rules’ Lala Details What Fiance Randall Did to Upset Her Recently, Talks Faith Stowers’ Potential Return to Show and Addresses Stassi and Kristen’s Firings, Plus She Dishes on New Season and Shares Wedding Update

Vanderpump Rules’ James and Raquel Defend Lisa Vanderpump Amid Lawsuit by SUR Employee, Plus Danica and Peter Speak Out and Lisa Reacts on Twitter

Garcelle Beauvais “Scared” to Return to RHOBH After ‘Warning’ From Lisa Rinna at Reunion About Coming Back Next Season, Says More Than One Costar Was Sent a Cease and Desist, and Talks Denise’s Future on Series 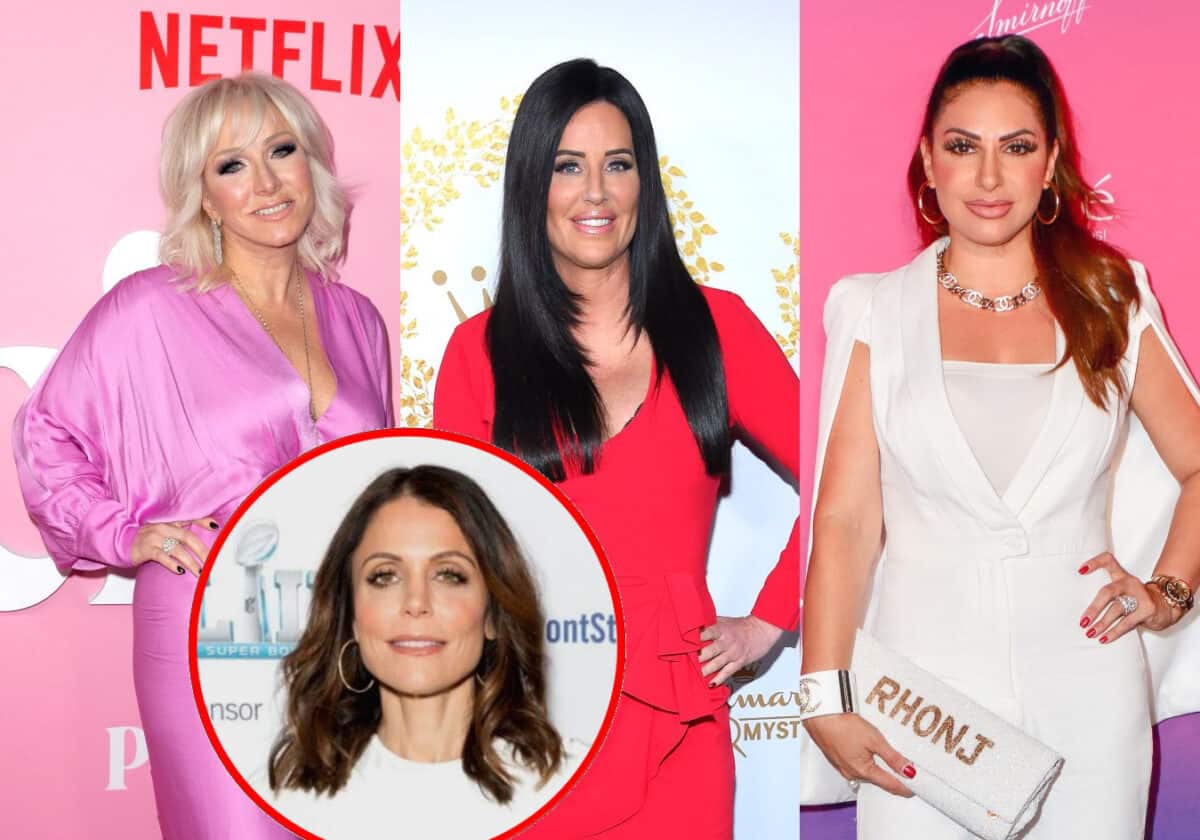 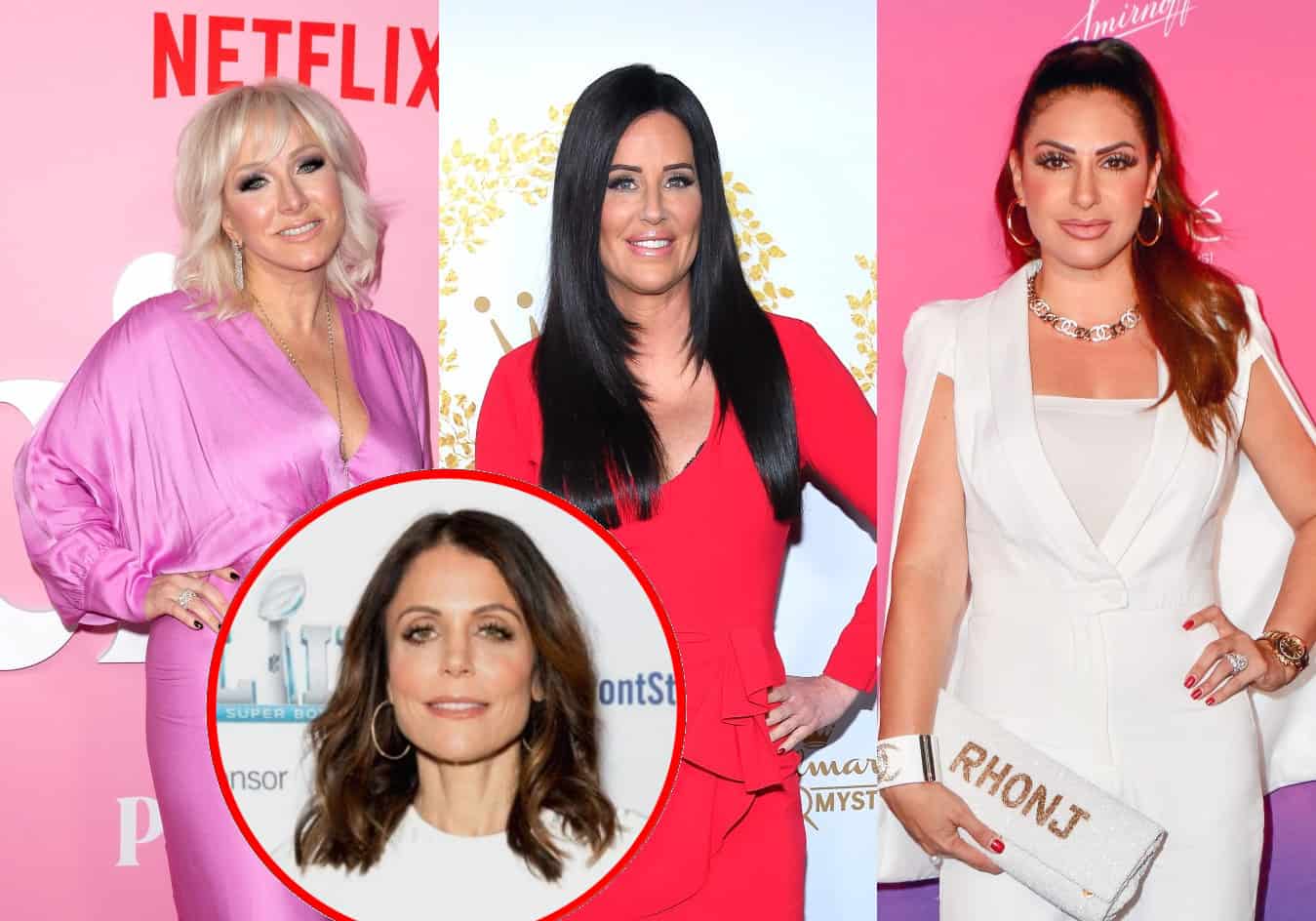 Jennifer Aydin was called out on Twitter by both Margaret Josephs and Patti Stanger after dissing former Real Housewives of New York City cast member Bethenny Frankel on Wednesday night’s episode of Watch What Happens Live.

After the Real Housewives of New Jersey star referenced Tales from the Crypt in an effort to diss the 49-year-old for suggesting on Instagram that she wasn’t as funny as she claimed to be, Jennifer was forced to defend herself against tweets from her co-star and the former Millionaire Matchmaker star.

“What’s truly funny is in ten years no one will know who Jennifer ever was. Bethenny will still be spending her time making power moves and giving back to all those in need. I landed the plane too bad you couldn’t land a joke,” Margaret wrote to Jennifer after seeing a clip of her WWHL appearance.

Margaret also told Jennifer with a hashtag that she finds her to be “cringeworthy.”

In response to Margaret’s suggestion that Jennifer’s “15 minutes” will be over soon, Jennifer told Margaret it is she who should be worried about her staying power in the world of entertainment.

“Keep in mind how Bethenny started 10 yrs ago-how if it wasn’t for housewives, she wouldn’t have any of her success-I accept your challenge & let’s make a date to meet up in 10yrs & see if I can still see either of u from where I will be,” Jennifer retorted, also adding a number of hashtags, including the word “cringeworthy.”

Keep in mind how Bethenny started 10 yrs ago-how if it wasn’t for housewives,she wouldn’t have any of her success-I accept your challenge& let’s make a date to meet up in 10yrs & see if I can still see either of u from where I will be #cringeworthy #talesfromthecrypt #shestarted https://t.co/r7xI45TX7w

“Why does [everyone] fail to see that people start with me first!” Jennifer wondered. “And then I have cast mates that engage in the negativity against me-& then they get mad when I have a reaction! Don’t come for me, unless you can take the clap back literally.” 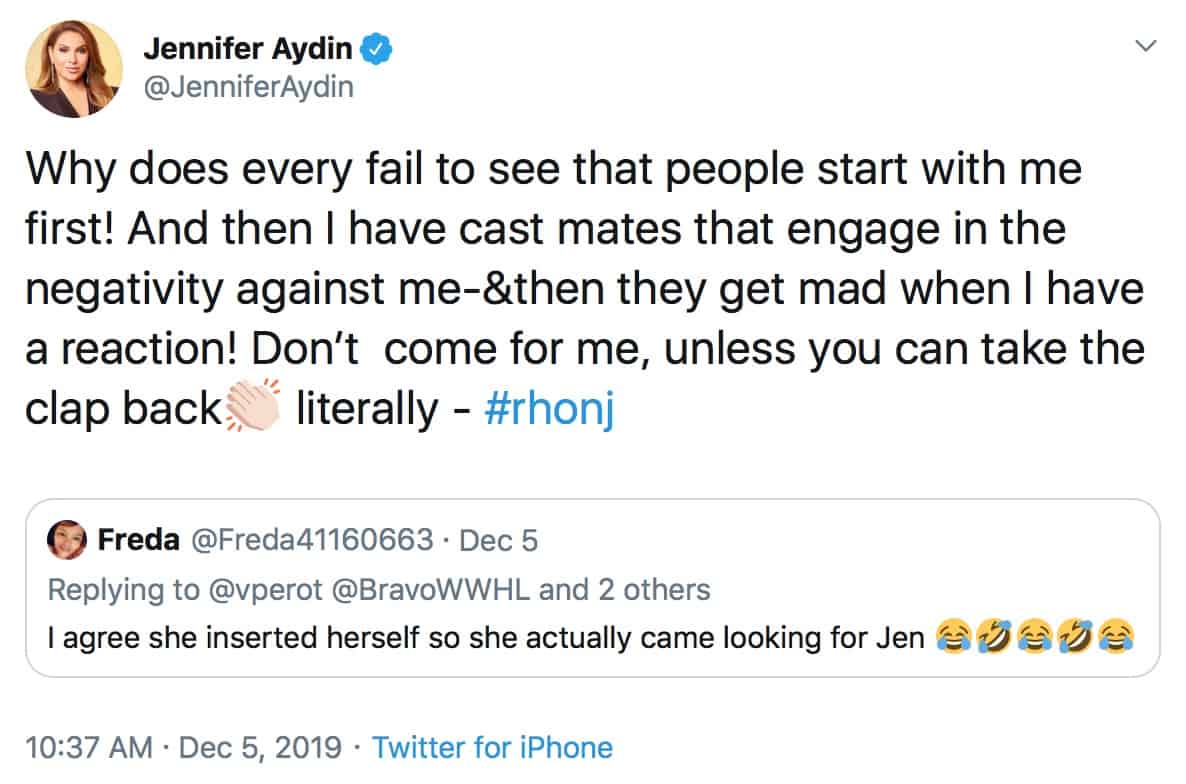 As the Twitter drama continued, Jennifer was confronted by a woman who warned her about coming for Bethenny and told her she is not funny or smart.

“Um- hello? She did send for me.. she started with her initial comment by insulting me, when I don’t even know her,” Jennifer replied, encouraging the woman to check her facts.

Um- hello? She did send for me.. she started with her initial comment by insulting me, when I don’t even know her #factcheck #rhonj

While many of her fans and followers have slammed Jennifer for going after an OG like Bethenny, Jennifer doesn’t understand why she is expected to allow Bethenny to shade her online.

Thank you!!! So she’s allowed to shit on me and I’m supposed to stay silent cause she’s an OG?! I’ve swam in shit before and always rise back up #poowater #rhonj

Amid the drama, Patti sent a tweet to Jennifer in which she slammed her for making a “dumb a**” move and said she finds Margaret to be “way funnier.”

“Love you [Patti Stanger] [boss babes] stick together. Move to NJ we need you,” Margaret replied.

After learning of Patti’s tweet, Jennifer sent some shade back to her.