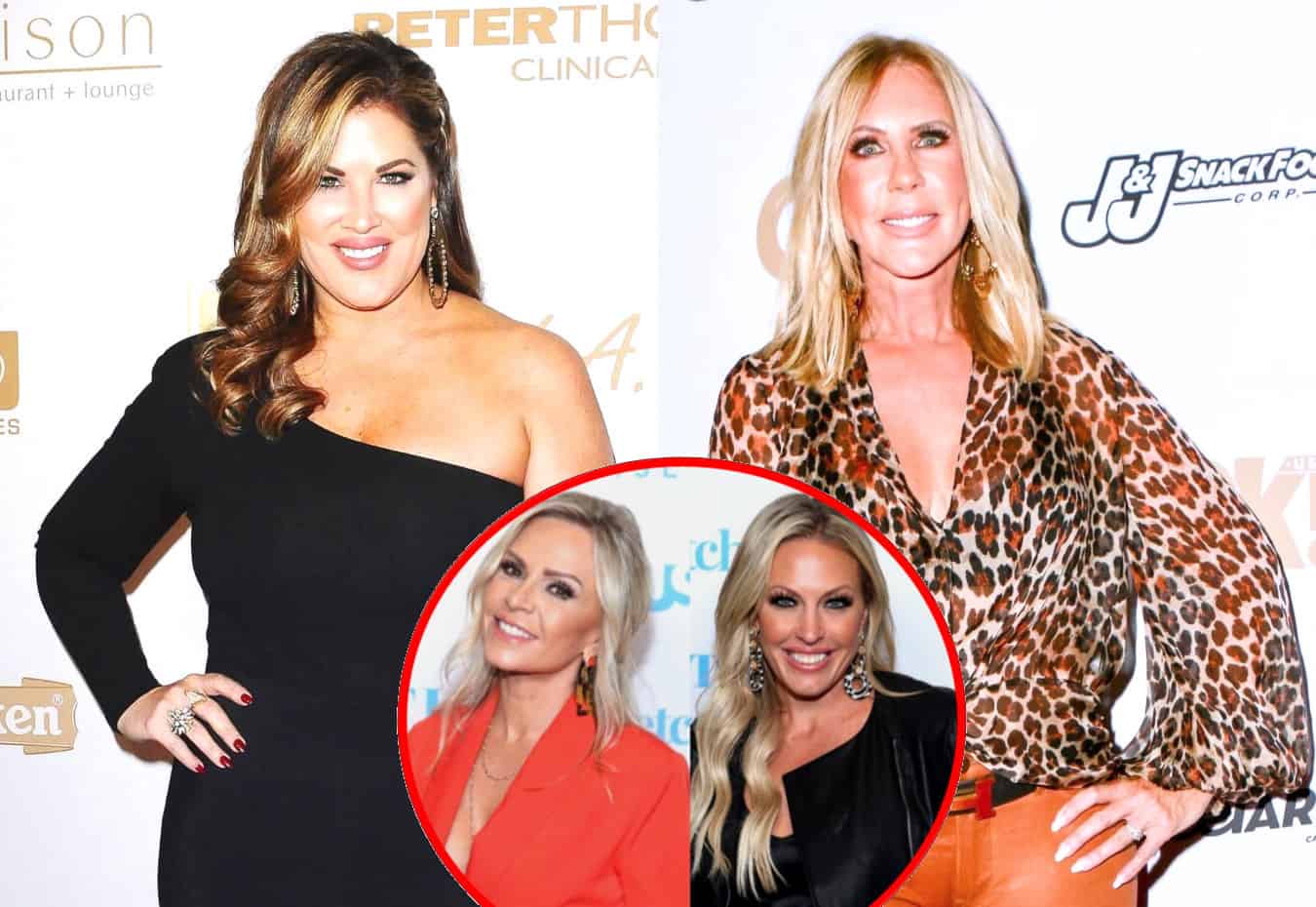 Emily Simpson and Vicki Gunvalson continue to engage in their Twitter war.

In a series of new tweets, the 43-year-old Real Housewives of Orange County star takes aim at Vicki, 57,  for being a senior and called her out for lying as Tamra Judge was seen reacting to Braunwyn Windham-Burke‘s amusement over Emily’s posts and Kelly Dodd offered thanks.

In her first post, which came after she tweeted that McDonalds and Arby’s offer “senior discounts” for those 55 and older and encouraged Vicki to “enjoy [her] roast beef sandwich,” Emily mentioned that Vicki was being smart by taking advantage of discount, even though Vicki had denied eating fast food.

Emily also pointed out that while Vicki said she doesn’t eat fast food, she was spotted with an In-N-Out bag and cup on an episode of RHOC. In fact, she tweeted a photo of Vicki holding the fast food bags to her. 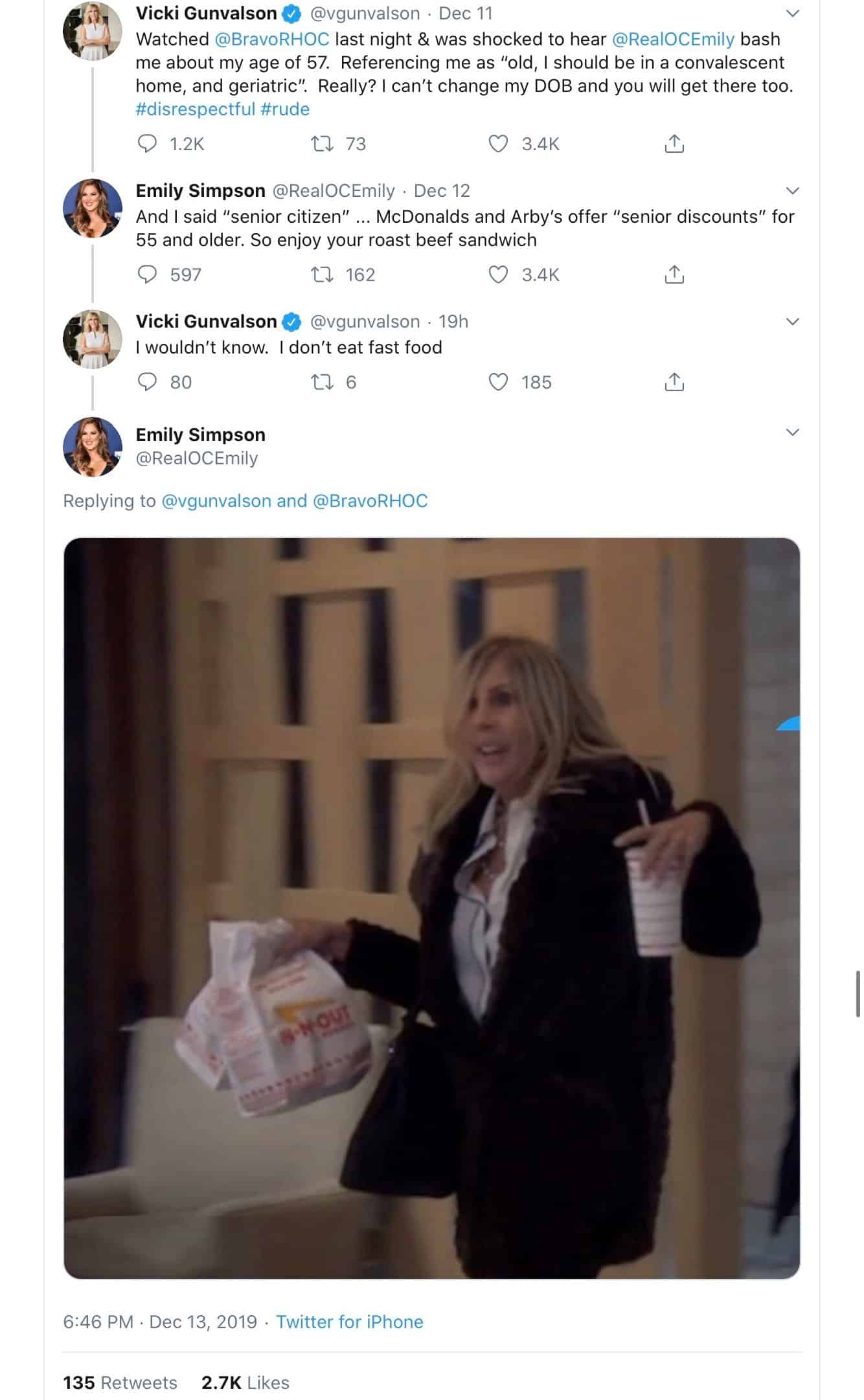 After seeing Emily’s post about Vicki and her senior citizen discount, Braunwyn made it clear that she was amused by her co-star’s antics and was quickly met with a comment from a very surprised Tamra, who wondered why she was supporting Emily’s behavior.

“I love Emily,” Brauwnyn wrote in a comment, adding a laughing emoji.

“You support this?” Tamra asked with a face-palm emoji.

In response, Braunwyn told Tamra that she knows she doesn’t like Vicki. 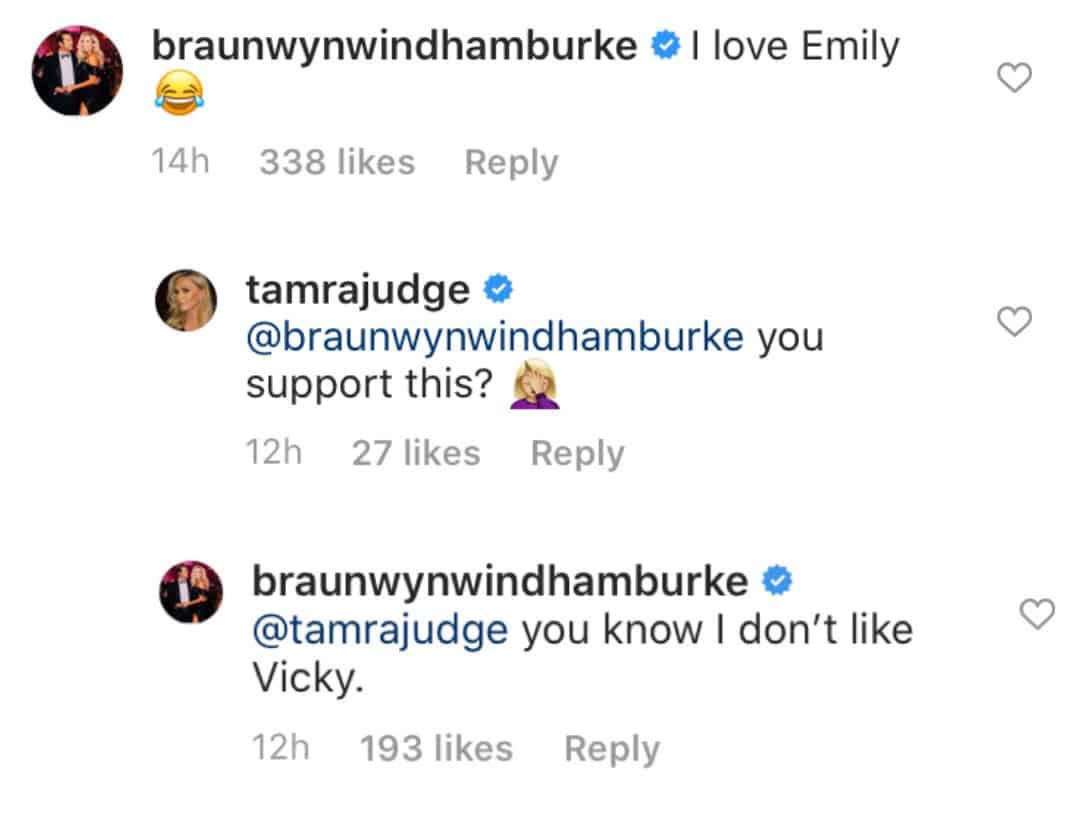 While Vicki has accused Emily of drinking Kelly’s Kool-Aid, Emily has denied any such thing and instead said that she simply didn’t turn on Kelly as Vicki would have preferred.

After seeing what Emily had written about Vicki and the cast allegedly attempting to convince everyone to ice Kelly out in an effort to have her fired, Kelly thanked Emily for having her back.

“Thank you [Emily] for having my back!! You are a solid person with such good character .. I love you so much!!” she wrote.

On recent episodes of RHOC, which have featured the women enjoying a girls’ trip in Florida, Vicki and Tamra have stayed close to Shannon Beador as the rest of the women have been spending plenty of time by themselves while continuously throwing shade at the “Tres Amigas” age.