Home Real Housewives of Beverly Hills News Brandi Glanville Exposes a RHOBH Star’s “Skeletons” During Filming and Nearly “Hit Someone,” Plus She Opens Up About Her “Depression” and Dealing With Backlash

Brandi Glanville Exposes a RHOBH Star’s “Skeletons” During Filming and Nearly “Hit Someone,” Plus She Opens Up About Her “Depression” and Dealing With Backlash 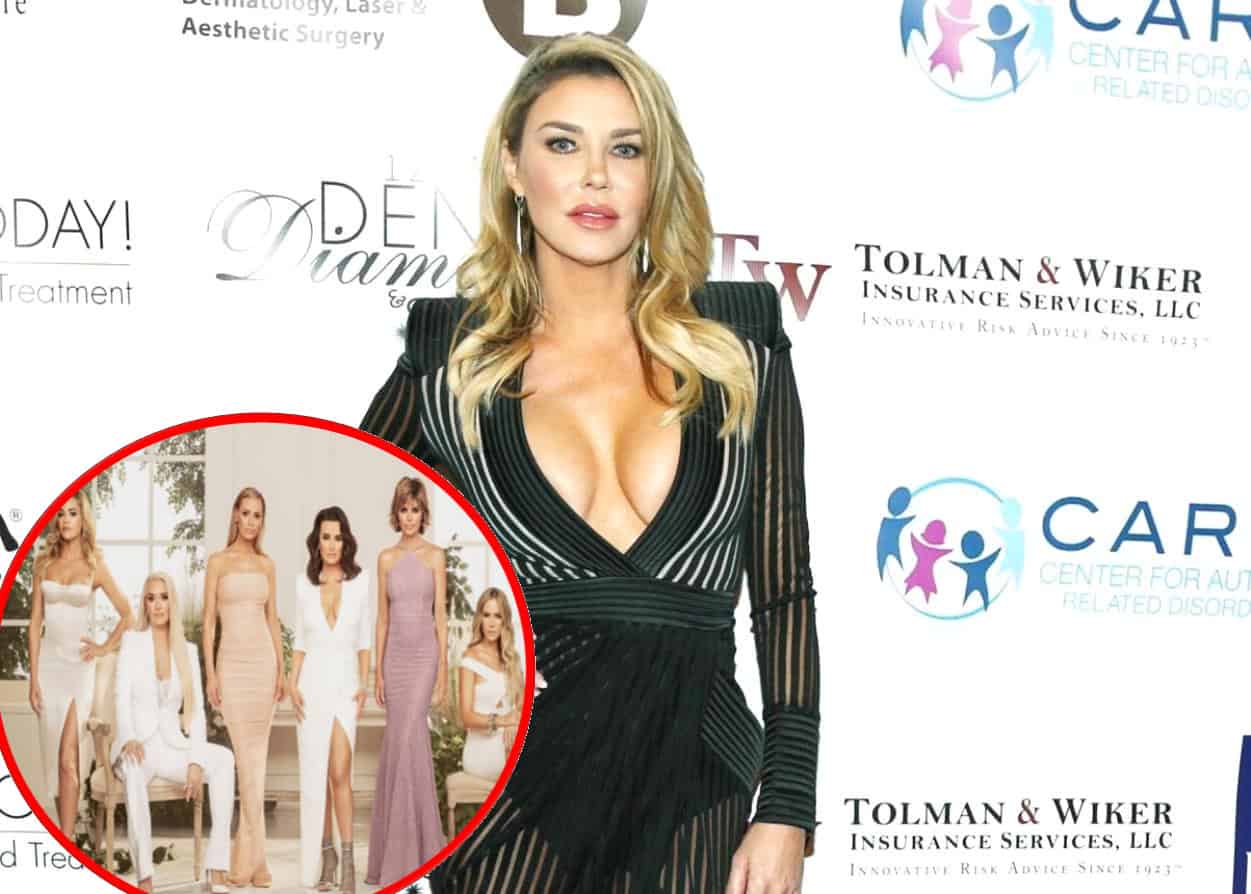 Brandi Glanville has gotten right back into the drama after rejoining The Real Housewives of Beverly Hills cast for season 10.

During a couple of new interviews, Brandi opened up about an on-screen confrontation with one of her co-stars, threw shade at Camille Grammer, and explained how social media led to her depression.

“I think I cried. I almost hit someone,” Brandi revealed to Justin Sylvester of her RHOBH return on Just the Sip. “It’s no joke and I forgot how stressful it can be. It’s like a middle-aged women gang.”

Throughout her time on RHOBH, Brandi has been known for having a loose tongue and looking back, she admitted to questioning her lack of self-control.

“The sh*t that comes out of my mouth, I’m like, ‘Why did I say it, why?’ But I just can’t help myself sometimes, hence the lawsuits and all the trouble I get into,” she explained.

Brandi then addressed the “fake” of the franchise, saying that there are a number of people within the Real Housewives franchise who “fake it for the cameras.”

“I personally don’t [feel pressure] but I see some other women feeling like they gotta get their foot in the game, like they aren’t relevant this season because they’re not involved in the fighting,” she explained. “That’s when I feel it looks fake.”

Earlier this month, Brandi shared a mysterious tweet in which she seemingly called out someone for attempting to hide certain aspects of their life from the cameras.

If you sign up for a reality show any & all skeletons you have in the closet WILL come out eventually you can’t have secrets & expect to keep them EVER !!! so it’s just best to be honest #own it

Speaking about the said tweet, Brandi said there is somebody on RHOBH who is “not being herself.”

“She’s faking it and she has some skeletons in the closet and guess what? They’re out. I brought ’em out,” she teased.

According to Brandi, the mystery woman called her a “liar” during filming, which was a major mistake.

“I’m not a liar. Do I sometimes defend myself too much? Yes, but it’s a reaction. I love hard and I fight hard,” she said, not revealing if it was during this encounter that she nearly hit someone.

During her early years on the show, Brandi was quite a controversial character and because of her often over-the-top behavior, she frequently received backlash and hate on social media.

“That was a huge part of my depression,” Brandi revealed. “I was drinking too much, I was depressed. I was so obsessed with what everyone was saying on social media. They were so mean and I only read the negative comments. I obsessed over it. I try to remind people… We’re trying to entertain you but it is real life. And so, if you’re signing up to have everyone have an opinion on you, you have to take the good and the bad. And it’s hard to do and I didn’t do it for years. I fought with everyone. I was a mess.”

“Kyle gets it too,” she continued. “She gets so much hate and we engage because we are good people and we want to tell people. ‘It’s just that one thing that one time you saw.’ It is highlights of our life. It’s 42 minutes of seven different people.”

Later on in the interview, host Justin suggested that certain Real Housewives have been known to “gas their fans up to attack other people.” In response, Brandi gave a nod to Camille, who she feuded with on Twitter last month after Camille said negative things about her online before running from her at a party thrown by Kyle Richards.

“I was shocked to see her at that party. I’m like, ‘You left Twitter for long enough to be here? I’m proud of you girl.’ She ran from me. She wouldn’t even come over,” Brandi recalled. “She was scared of me, which she should be scared of me because on Twitter she talks sh*t and then when she sees me in real life she didn’t… I’m like, let’s have a conversation because we’ve always been friends. If you’re real brave behind the computer screen, walk your walk. Do it in person.”