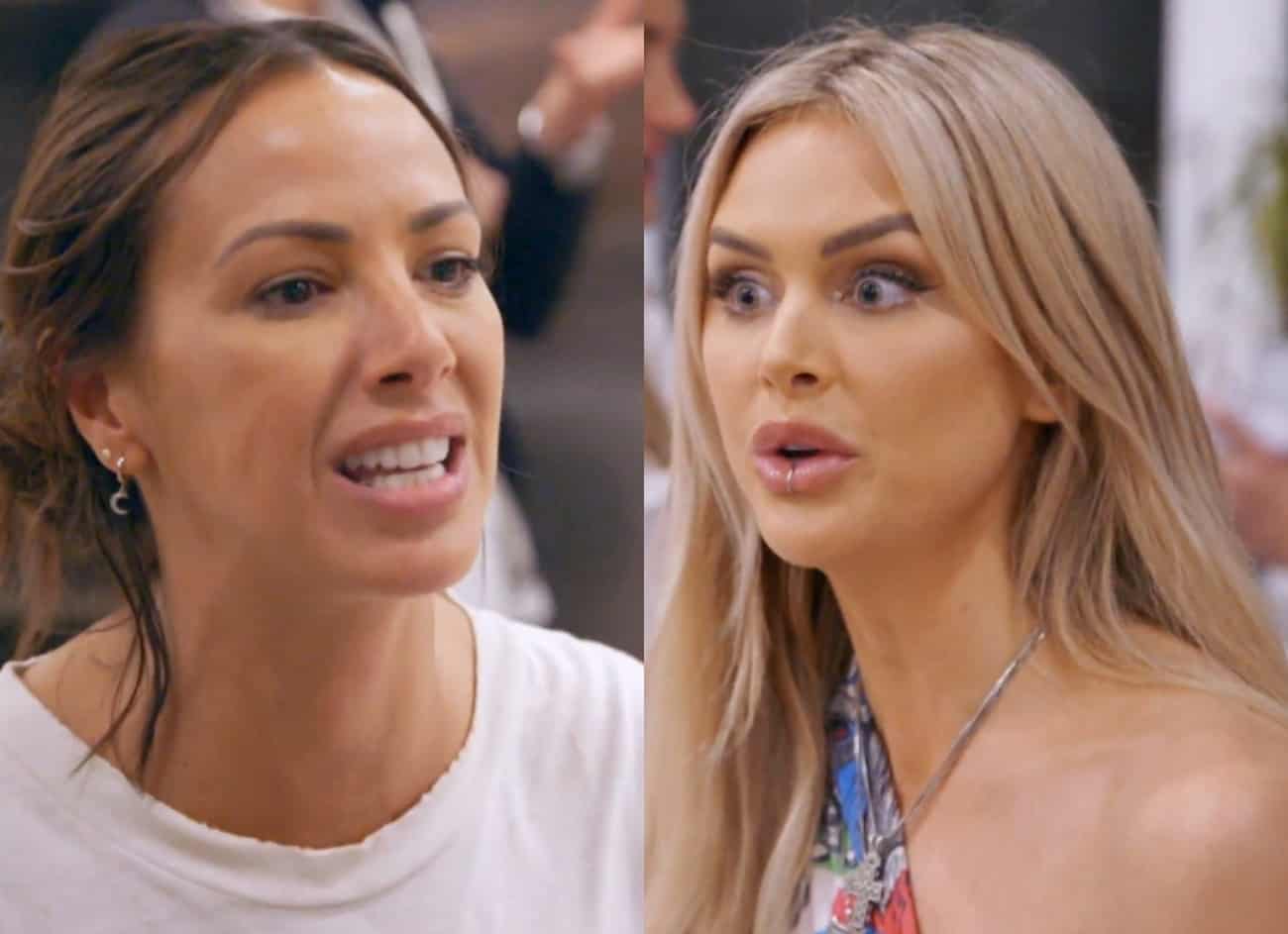 It may be a new season, but the two Toms, aka Tweedle Dee and Tweedle Dum, are still cruising around in that sidecar show. COME ON. They roll up to their restaurant, TomTom, and high five the new girl, Dayna. Sandoval explains that he feels like he runs the place, and Schwartzie states that they’ve hired the best staff ever. Enter Max, the general manager of TomTom. He’s one of the “new people” on the show, and he seems like he is trying WAY too hard to fit in with the Toms. Dayna, the hostess, has already mixed business with pleasure, as she and Max have hooked up, making things a bit weird at work.

Over at SUR, Scheana is giving work advice to Brett, the new guy. Somehow, she slips in the fact that she’s divorced during her training, and it’s a very obvious attempt to let him know she is interested. But alas, the two have already hooked up and Brett tells the world that Scheana is not that great of a kisser. Ouch.

“I feel like my pageant training has really prepared me for working here.” OMG, Raquel. Don’t worry. We haven’t forgotten that you are a beauty queen. Seems like Raquel has worn down LVP enough to score a job at SUR, but we can’t say the same for her boo, James. James is still not welcome to work there, and Raquel admits that it is hard for him to swallow.

Katie, LaLa, Ariana, and Brittany no longer work at SUR. That would explain all the replacements. Wait — Scheana used to date Max, the GM at TomTom? How incestual is this crew?!

Back at SUR, Jax chats it up about his bachelor party and confides in Scheana and Brett about his current status with Sandoval. So it turns out that Sandoval got bumped from being one of Jax’s best men. All because Sandoval didn’t attend Jax’s “pre-bachelor” party. Wait, is that a thing? I smell some drama.

Stassi and Beau make their grand debut. They arrive at TomTom for a meal and we find out that Stassi’s grandma, her BFF, just passed away. LVP makes her way over to the table, boots Beau away, and has a heart-to-heart with Stassi. Stassi is going through a tough time, as she is on a high from her NY Times best-selling book, yet she lost one of the most important people in her life.

To change the subject, Stassi begins discussing Kristen with LVP. Sounds like Kristen is STILL crazy. Stassi states that as of late, things are a bit tense between her and Kristen because she is lying about her break-up with Carter.

The next day, as she prepares for her grandmother’s funeral, Stassi fills Beau in on her preferred death plan (so dark). She laments that they will be missing Katie and Schwartzie’s housewarming party for their new home (see photos here!). I love how Stassi calls everyone out for having the exact same houses cuz #suburbia.

Get a load of these homeowners who migrated to the Valley. Apparently, Sandoval and Ariana started the whole moving out of West Hollywood trend by buying a $2 million house, and they are a bit irked that everyone followed suit. The Jax and Sandoval drama begins spiraling. Sandoval is p*ssed at Jax because he essentially copied their house idea with his $1.9 million home. Jax is p*ssed at Sandoval because he isn’t holding up his end of best man duties.

YES. Two of my favorite things: LaLa and Villa Rosa. It’s pretty incredible seeing LVP this much, as she dipped out of RHOBH and I have missed her terribly.  She is as lovely as I remember.  She hosts LaLa, even though LaLa no longer works at SUR (cuz ya know, she rolls up to places in a PJ). I must say, LaLa looks phenomenal (well, not in her confessional segments). She lets LVP know that she has hit seven months sober. She further explains that part of being sober is making amends with others; therefore, she tried to reach out to James. James is STILL not sober.

Holy hell. Kristen looks like a hot mess. She is clearly going through a break-up, but Stassi calls Kristen out for lying. Is she broken up with Carter or isn’t she?! Stassi is frustrated with the way “things work” for Kristen, as Kristen is still sleeping with her ex but saying she is heartbroken and devastated.  Stassi can’t keep up with her lies.

I’m glad Schwartzie dressed up for his housewarming party. And that Sandoval got the memo to wear his light up shoes.  To be honest, I didn’t even realize they made that type of footwear for people over the age of five. To get him some screen time, Peter pulls Dayna aside to address what he believes is the elephant in the room. NO WAY. Dayna was one of those girls at Sky Bar last year?! Peter claims that he made out with Dayna, but she is denying it.  Poor, poor Peter.  Either your make-out sesh was so unforgettable that Dayna has no recollection of it, OR you just made it up to #stayrelevant.

Brett and Max have a talk about Scheana. Max tells Brett that Scheana is a little “boy crazy” and that Max made the “mistake of hanging” with Scheana all the time. Basically, Max makes Scheana look like an idiot. Katie overhears this chatter and lets Scheana know the deal. Scheana confronts Max and begins whine-crying about being offended. Ever notice that people who repeat over and over again that they aren’t crazy actually ARE crazy?

I’m happy to see that although they are pretending to be grownups owning homes and all, they are still up to their old antics: chugging, playing with blow-up toys. Normal. Speaking of normal, Max attempts to take Dayna out even though he is going to Palm Springs with Scheana next week. TOTALLY normal. Despite the shadiness, Dayna accepts and they plan to go on a date.

LaLa decides to take matters into her own hands regarding this Kristen/Carter break up. She is tired of Kristen crying over Carter cuz he won’t move out, blah, blah, blah. So, LaLa goes right to the heart of the issue. She lays into Carter and basically lets him know that he is “sucking the life” out of Kristen. Carter attempts to defend himself by throwing Kristen under the bus. Who is telling the truth here? Yes, I get that every story has two sides, but Carter says one thing about Kristen and Kristen says that he is essentially over-staying his welcome.

Do Jax and Sandoval even know each other? How awkward was that introduction by the pool? Sandoval makes it clear that the house buying situation felt like a “one-upping” the whole time. Jax sounds like every girl who has ever gotten married because he just keeps using that as his crutch. He cries about Sandoval not being helpful or around, but in the end, Jax takes Sandoval back. And now he has two best men again. Insert eye roll here.

Not all gets settled at this housewarming. After his conversation with LaLa, Carter finds Kristen and lets her know what went down, and the girls look on with disgust.  Basically, “Carter has some sort of strange power over Kristen.”  On one hand, Kristen cries about moving on and “doing the best I can to be happy.” On the other hand, she allows Carter to tell her he loves her. Although confusing, I am unclear why any of them are inserting themselves into Kristen’s business, other than the fact that they are tired of Kristen crying wolf.  After things escalate between LaLa and Kristen, Katie shouts, “Get over yourself!”

And with that, a drunken Kristen staggers out of the party, and it appears as though some things never ever change.

TELL US – THOUGHTS ON THE PREMIERE EPISODE OF VANDERPUMP RULES?