Home Real Housewives of Orange County News Vicki Gunvalson Disses Andy Cohen After Quitting the RHOC, Plus She Shares Why She Left the Show and Accuses Producers of ‘Manipulating’ Her

Vicki Gunvalson Disses Andy Cohen After Quitting the RHOC, Plus She Shares Why She Left the Show and Accuses Producers of ‘Manipulating’ Her 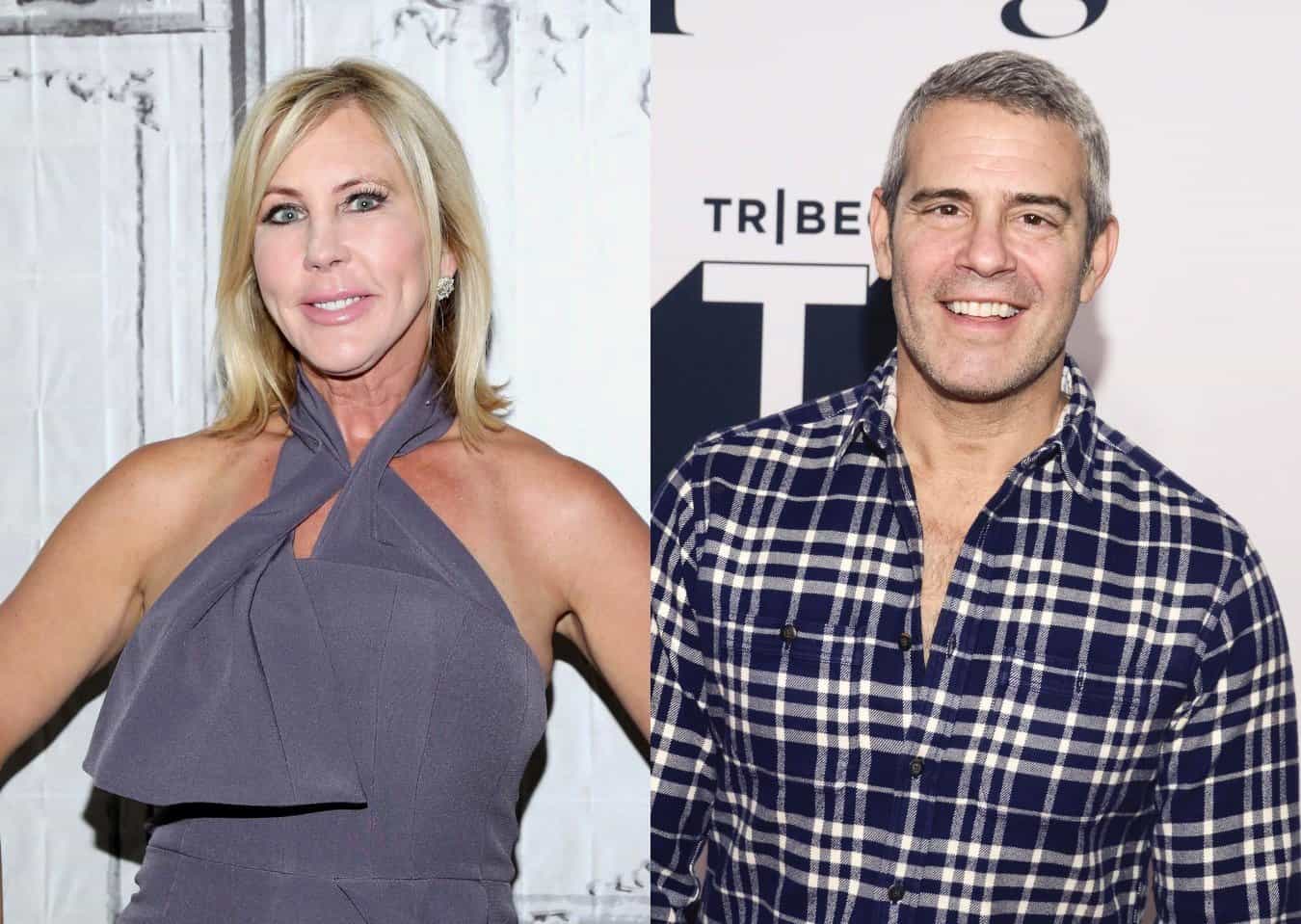 Vicki Gunvalson is getting a lot off her chest just days after her stunning announcement that she decided to exit the Real Housewives of Orange County.

Despite receiving a rather touching tribute from Andy Cohen on Friday, the original RHOC cast member didn’t hesitate to call out the Watch What Happens Live host on Twitter earlier today.

Following Vicki’s announcement regarding her departure, a fan wrote to her: “Very telling…. no thx to Andy. I dont blame you, he really didn’t have your back this reunion.”

Vicki agreed with the fan, responding: “No HE didn’t! Very telling to say the least. Shouldn’t have stayed as long as I did.” 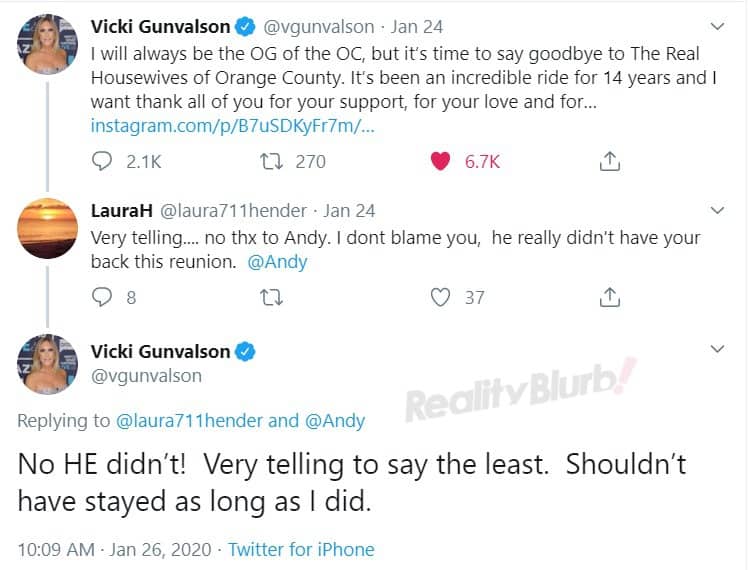 The same day Vicki announced her exit, Andy dedicated a tribute to her on Instagram, thanking her for “everything.” And Vicki responded to his post by writing: “Thank you @bravoandy for this great post. What a great FUN ride it’s been. I love you, Bravo and Evolution and thank you for 14 incredible years ❤️????.”

After a fan told Vicki that she had “put Andy in his place,” Vicki, who got into it with Andy during the reunion, agreed writing “Yep” in response.

Vicki wasn’t done yet as she also slammed the RHOC producers for allegedly manipulating her in addition to lying to her as well.

“Vicky’s ego would never allow her to admit she got fired, however we can all assume she did. Especially after the way she treated producers at the reunion,” wrote a Twitter user.

Vicki tweeted back: “There is a lot you didn’t see, and my producers and I are very close. However, after being lied to and manipulated I lost my “s**t”. Always 2 sides to every story.” 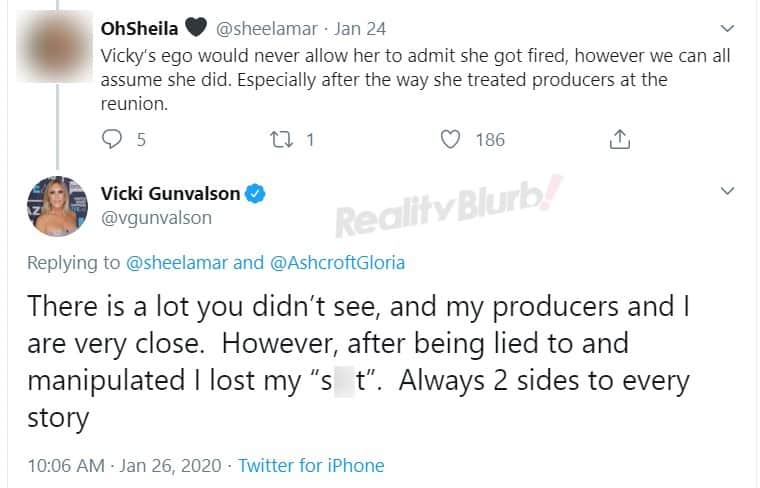 When it comes to her reason for leaving the Bravo series, which she has been a part of for 14 years, Vicki seemingly acknowledged that money played a role in her decision to walk away from the show.

“Bethenny quit after negotiations didn’t go her way so I’m sure that’s what happened to Vicki they didn’t want to pay her what’s she’s worth evolution tv treats these women like their prositutes [sic] plus look how they treated her last season so Vicki leave your way,” wrote one of Vicki’s supporters on Twitter.

Vicki agreed with her fan’s statement, writing: “Yes that is true.” 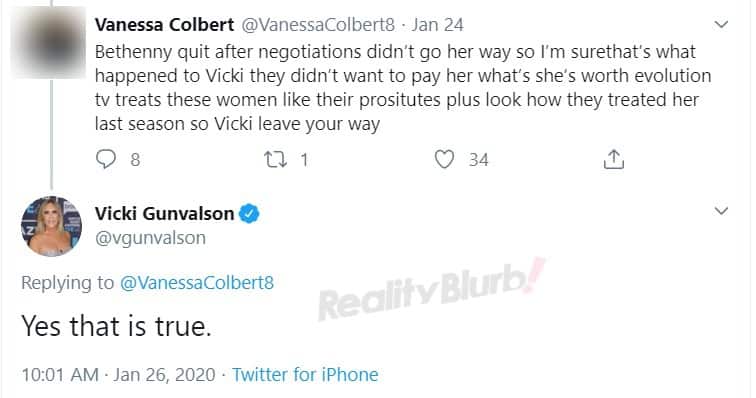 Vicki’s statement would appear to imply that she was asked to return in some capacity but chose not to due to the pay. Last November, Vicki had mentioned that she would not return to the RHOC unless she was offered a full-time gig, a year after the Bravo network reduced her role to a part-time gig.

Vicki also feels it is the ‘end of an era’ on the RHOC following not just her exit, but also the departure of Tamra Judge who announced she was walking away from the series on Saturday.

As for what comes next for Vicki, she has teased her new podcast titled “Whoop it up with Vicki,” and recently voiced an interest in getting her own spinoff show which would chronicle her work and family life.