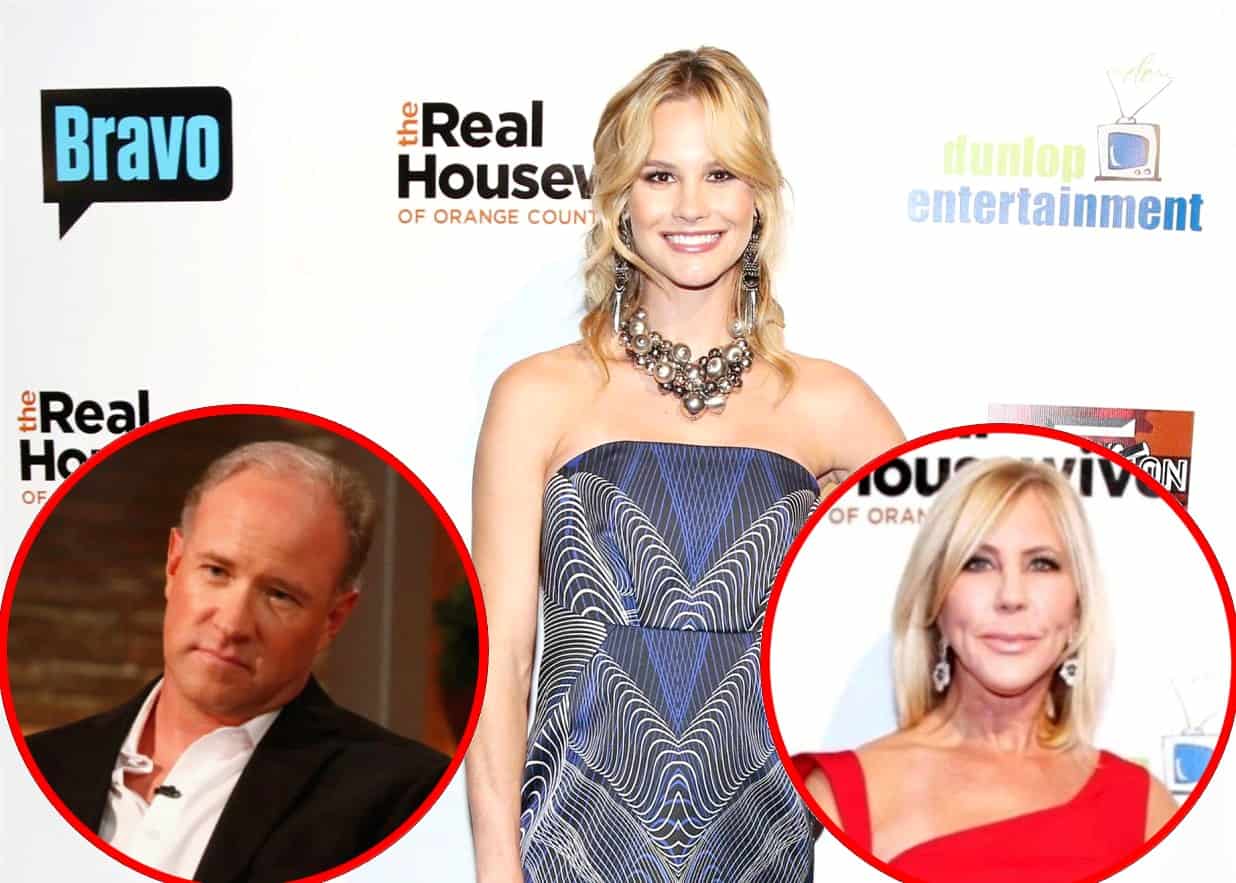 Meghan King Edmonds joined the cast of The Real Housewives of Orange County during its 10th season and quickly made waves amongst the cast when she called out Brooks Ayers, who was dating her co-star Vicki Gunvalson at the time, for lying about his stage four cancer diagnosis.

During a recent interview with Heather McDonald on her podcast, Meghan revealed how she was cast on the show before opening up about her decision to call Brooks out for his mistruths and revealing which of her former co-stars she still talks to.

“Jim and I were in Orange County for something and he was friends with [Heather Dubrow] and [Terry Dubrow] and they were having a party. They invited us to it. They said it was going to be filmed [and] it was filmed,” Meghan recalled on Juicy Scoop of the moment that led to her casting. “At the party, I went up to the bar for a drink and David Beador was there. I was randomly inserted in some drama because I asked for a drink and I guess David ignored Shannon while getting me the drink or something.”

“That’s how production knew about me,” she explained.

According to Meghan, the RHOC production team called her after the party, and because her stepdaughter Hayley Edmonds was planning to attend high school in Southern California, she decided to live there with her as she filmed the show.

During her season 10 debut, Meghan was determined to expose Brooks’ cancer lie so that viewers weren’t fooled into thinking the juice he and Vicki were promoting at the time had cured him. She was prompted to voice her concerns after a psychic claimed Brooks didn’t have the disease.

“I started saying to myself, ‘If he doesn’t have cancer, this is a disservice to all of the viewers who are watching because he’s going to say he got cured from the juice he’s pushing with Vicki,’ which is what they were doing,” Meghan explained. “They were pushing some juice. So then I started getting real deep into it.”

Throughout season 10, Vicki was seen promoting a juice detox on her Instagram page. On the show, Brooks was also heard mentioning the juice cleanse, which he also referred to as vitamin therapy.

Although Vicki has insisted that she was not involved in Brooks’ cancer lie, Meghan said Vicki was “abrasive” toward her from the get-go and suspects her behavior was due to the fact that she was holding a big secret at the time.

“I just thought that something was off with her. But now I know, fast forward, she was being defensive because he didn’t have [cancer],” Meghan noted.

Meghan and Vicki also butted heads during their time together on the show after Vicki took aim at Meghan’s marriage to Jim Edmonds and suggested they wouldn’t last more than five years.

“That’s cryptic, huh? Five years… to the day. That’s f**king cryptic,” Meghan admitted. “I didn’t even have time to think about it [because] it all happened so fast and then a fan said something and I’m like, ‘Holy balls.’ She is something else, that’s for sure.”

While a number of Meghan’s ex-co-stars reached out to Meghan after her and Jim’s split, she confirmed to Heather that Vicki did “not directly” reach out to her. Then, she revealed which former castmates she’s still in touch with.

“I keep in touch with [Tamra Judge] and I did talk to [Shannon Beador] recently. She helped me get a reservation at a restaurant. And I talk to Heather Dubrow. [Lizzie Rovsek] will message me now and again. And that’s it,” Meghan shared.

During another portion of the show, Meghan added that she and Tamra “talk a lot.”