Home Real Housewives of Beverly Hills News RHOBH’s Erika Jayne Addresses the Brandi Glanville and Denise Richards Affair Rumors and Reveals if She Misses Lisa Vanderpump, Plus Find Out Who She’s Closest to and if She and Tom Signed a Prenup

RHOBH’s Erika Jayne Addresses the Brandi Glanville and Denise Richards Affair Rumors and Reveals if She Misses Lisa Vanderpump, Plus Find Out Who She’s Closest to and if She and Tom Signed a Prenup 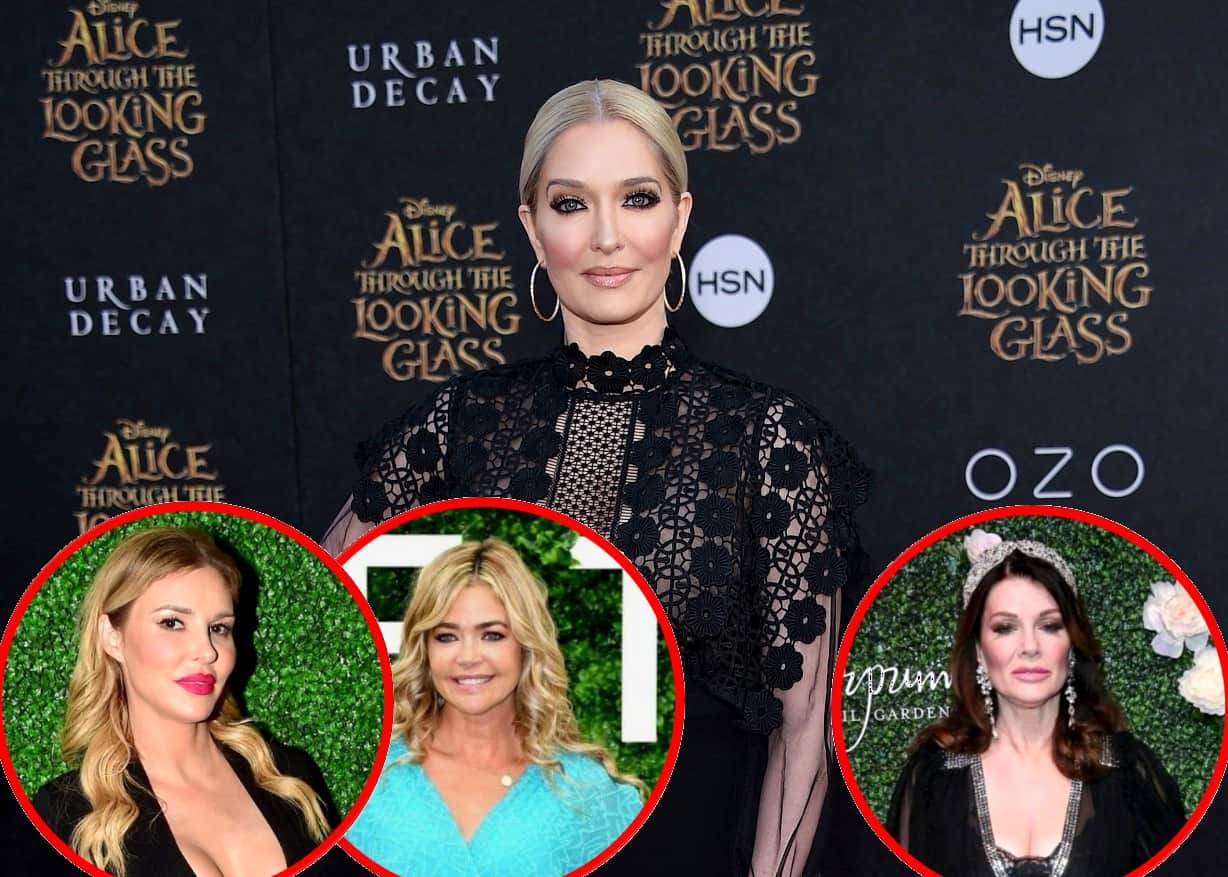 Erika Jayne opened up about the 10th season of The Real Housewives of Beverly Hills during an appearance on The Wendy Williams Show on Friday.

In addition to addressing the Brandi Glanville and Denise Richards hookup rumors, Erika spoke about the absence of Lisa Vanderpump, revealed which of her co-stars she’s closest to, and answered a question about whether or not she and husband Thomas Girardi signed a prenup before they wed 20 years ago.

“Let me say this: There are two sides of every story. The viewer will get to hear both sides and see both sides. I have my opinion based on what I’ve seen [and] I’m going to keep it to myself,” Erika explained.

“And there’s more to just ‘the affair’… It’s about the way Denise relates to us in the group. It’s not just that,” she teased.

Before the start of production on RHOBH season 10 last summer, Lisa V. quit her role on the show and many believed the show would no longer be the same. However, according to Erika, Lisa V. wasn’t missed during filming.

“I personally do not miss her. Here’s the thing… Everyone is replaceable,” she explained. “We all know that. The show always goes on. It doesn’t matter. And I think we have proof that the world keeps spinning. The Housewives will forever go on.”

After embarking on her fifth season with the Bravo series, Erika moved to New York City to train for her role as Roxie Hart in Chicago.

“It’s a tough job. You don’t realize how tough a Broadway show is. But I love it. That’s my passion, my love,” Erika said of her new role on Broadway. “I encourage myself to do everything I want to everyday and I encourage everyone to live their dreams. I think it’s very possible.”

Although Erika is used to living in a large mansion in Los Angeles, she moved into a “really modest two-bedroom apartment” in the Big Apple during her months-long stint as Roxie and says she “[loves] it.”

“It’s like being 18-years-old again when I moved here for the first time. It’s actually really cool. I enjoy it,” she admitted.

Although new cast member Garcelle Beauvais wasn’t present when the ladies surprised Erika at her show, Erika said the two of them get along just fine.

“I like Garcelle,” Erika confirmed. “I think she’s going to make a great housewife. Your first year is always the introduction and then the second year is when they really let you have it. So we’ll see what happens.”

As for who she’s closest with, Erika said that honor belonged to Lisa Rinna.

“That’s my closest cast member because we have a lot in common,” she said. “We did Dancing With the Stars together. She did Roxie on Chicago. And we’re friendly. Our birthdays are a day apart. And I like her. She’s cool.”

Also during her interview, Erika revealed she and Tom tied the knot “with no prenup.”

“Another dream that can be realized,” she joked.

Erika then noted that when it came to a prenup, there wasn’t much of a point in signing one because her husband is one of the best lawyers in Los Angeles.

“No matter what… You gotta know who you’re marrying because he could get around it,” she noted.