Home Real Housewives of Atlanta News RHOA Recap: Nene Calls Out Cynthia For Passive Aggressive Behavior and Cries as They Mend Their Relationship

RHOA Recap: Nene Calls Out Cynthia For Passive Aggressive Behavior and Cries as They Mend Their Relationship 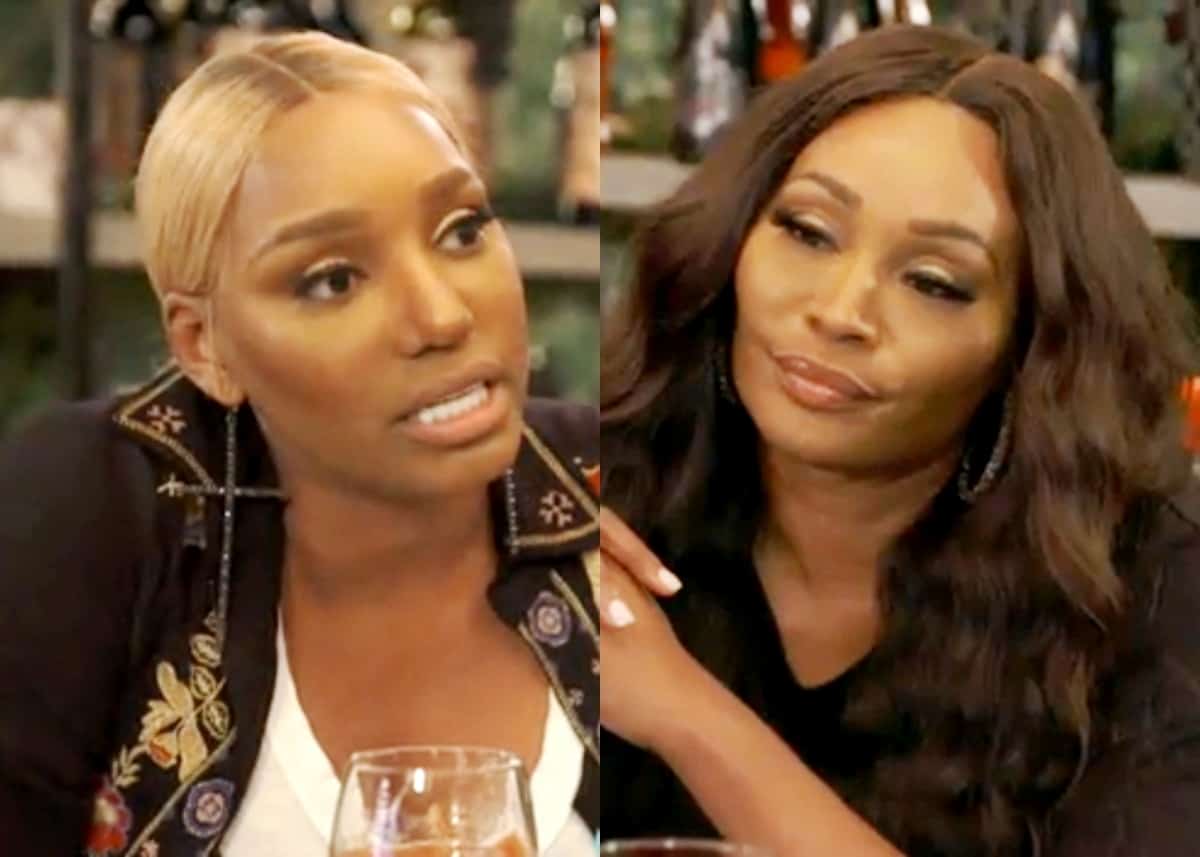 This week on The Real Housewives of Atlanta, Nene is back on her apology tour and desperately in need of people to film with. Will Cynthia accept Nene’s olive branch since she is her only frenemy left on this show, or will Nene self destruct?

The episode starts with clips showing the demise of Cynthia and Nene’s friendship. Hmm, interesting way to incorporate Nene back into the fold. Marlo comes to Nene’s shop, Swag, to hopefully shop since those black fringe pants look hideous!  They discuss the situation with Cynthia and how to approach the sit-down.  She needs this paycheck for that Rolls Royce car payment! Question! Do all Rolls Royces come with gold looking stars on the interior roof? Sorry, that distracted me in that scene. All I could think of was she added that since she thinks she’s such a star!

Cynthia visits Kenya and adorable baby Brooklyn. Precious! Kenya claims Marc just left for NYC. Cynthia is there to supposedly put Kenya on ice because she behaved like a total jack a** to Tanya.  She prays for strength before they eat dinner so she can properly read and school Kenya. Cynthia claims her part in this was innocent — not sure you should go with that one! Just be honest, Cynthia, own it!  She feels like she smells like asphalt after the Kenya rage bus ran over her using the Cookie Lady to drive it. Kenya is not that apologetic, just like always #Unaccountable.

Cynthia shares with Kenya what is included in her fiancé Mike’s book from his player days. She sees it as him being transparent. I think it might be more of a prelude to a future affair? Maybe he thinks if he shares all of his bad boy behavior it gives him a free pass. It speaks volumes to me that he just can’t be faithful to the multiple wives he was married to. Cynthia, run away from this player and back to Lake Bailey!

Eva is at her doctor’s appointment with Dr. Jackie. Baby Sterling is going to make his grand entrance soon but hopefully not too soon. Cynthia calls Eva regarding her meeting with Nene. Eva is wary and rightfully so.

Nene and Gregg discuss her fractured friendship with Cynthia. Gregg impersonates Cynthia as being a really weak person. Nene, you’re really using your sick husband as a weapon to further trash your dear friend? The perfect example of someone who doesn’t know how to be a friend.

Nene arrives at the Bailey Wine Cellar and makes nice with Cynthia. Nene is troubled by being described as toxic. She should be more worried about her toxic behavior! Cynthia feels she was provoked by being called desperate. Nene refuses to own her part in the demise of this messy friendship. She claims Cynthia hides her true self. Nene tells Cynthia to “have your moment” — which I think really means, enjoy the limelight while it lasts. She knows what it feels like to lose the limelight and need lawyers like Lisa Bloom to be able to steal it back.

Nene runs outside, and like a good soldier, Cynthia follows her out to the parking lot. I am sorry but Nene is not a good actress and those giant cross earrings are really distracting!  She fake boohoos and her gold eye makeup in this lighting looks very unflattering. Oh crap, don’t fall for this act! Cynthia eats crow and apologizes. Nene claims she doesn’t want to hurt her. Bullsh**! She wants to take her down with her sinking OG Bravo ship.

Marlo, who is pretty unrecognizable with no glam, is getting ready for the jungle brunch. She calls Porsha to find out if she is coming to the jungle. Porsha is not going to waste her time at a party that appears to be more like an ambush in the jungle. Production shows the invite, and talk about passive-aggressive! Quit Lion On Each Other is the way to approach your redemption tour, Nene? Come on now, production wants you to reconcile so you can move on . She obviously chose igniting a fire and burning her bridge with Bravo over so-called bad edits.

Cynthia picks up Eva and they chat about the conversation between her and Nene. She feels like they can at least be in the same room for now. Eva mentions she is feeling contractions but doesn’t want to miss the brunch? Why would she go into the jungle when she is about to possibly go into early labor?

Kandi arrives and calls Nene, who claims she is 10 minutes out. Cynthia shares Eva is not doing well. They decide to FaceTime Dr. Jackie, and she wants her to come to the hospital or they will have to deliver the baby. They want no part of that so Cynthia takes Eva to the hospital. Tanya arrives and helps get her in the car. She should go to the hospital too and avoid this jungle trainwreck of a party. Let’s hope the baby is okay since Eva is only eight months along.

Kandi chats with Tanya at the party. Kenya walks in and the energy shifts. She is beyond rude to Tanya and totally ignores her. This party is so weird, especially since Nene hasn’t arrived at her own party yet. Kenya bails when she has only waited seven minutes .

Nene finally arrives at this very strange party. She brings this other random group of women with her . Nene claims she has been having these jungle parties for quite some time. She does it to honor female entrepreneurs? Sure, you LOVE to support other women!

Marlo walks in wearing some ridiculous ruffled lime green leopard print jumpsuit. The other ladies share Porsha isn’t coming, but then in walks Porsha and Shamea. They walk into the lion’s den 25 minutes late. She also has no clue who any of these women are at the table. Neither do we! Porsha claims Mama Diane talked her into going ! She is guarded at this farce of a jungle party so she lets Nene pretend to make nice. Kandi thinks this is the fakest group of sisterhood. Amen, sister!

Next week, the rose is off the bloom with Mike and Cynthia, and Marc is continuing to be a total POS by siding with Nene over his own wife? Countdown to these relationships imploding…