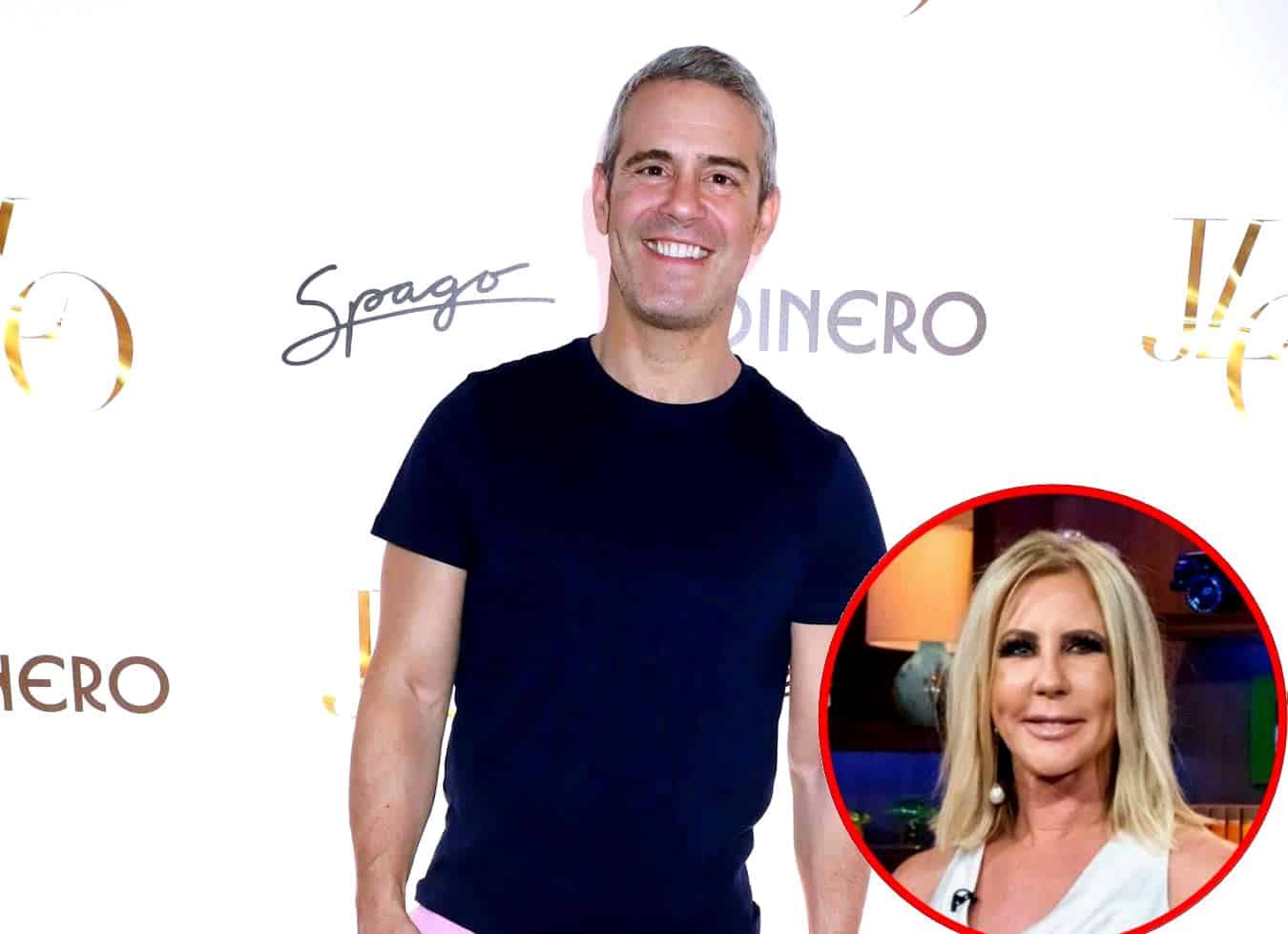 Vicki Gunvalson welcomed Andy Cohen to her podcast on Thursday and during the episode, he addressed their Real Housewives of Orange County reunion drama and revealed what research showed was a complaint viewers had about him as the host of Watch What Happens Live.

In addition to sharing that Vicki has called him often about removing articles from the internet that have painted her in a bad light,  Andy also revealed the biggest misconception about reality TV, and explained his decision to exclude Vicki from certain segments during the reunion taping for season 14, which led to Vicki being very irate backstage.

“We had two things that we were talking that actually didn’t involve you that I thought you were not going to really want to be a part of, one of which was even more conversation of [Braunwyn Windham-Burke] and her unusual relationship and all that stuff you thought was not lifting the show up,” Andy explained to Vicki on Whoop It Up with Vicki.

According to Andy, he believed Vicki wouldn’t want to be a part of what they were discussing because she didn’t approve of Braunwyn’s behavior and felt she should tone down her sexuality.

“There was part of me that thought, ‘Oh good, we’re not going to have to put Vicki through this.’ The things we hadn’t discussed at that point were Gina and her domestic abuse and Braunwyn and her unusual lifestyle…,” he continued.

Looking back, Andy said he wished “that things had gone down differently” between him and Vicki during the taping.

When the topic of conversation turned to Andy and his hosting gig on WWHL, Andy revealed he once went through an awkward time on the show in which he wasn’t as excited about it as he once was and added that during this time, viewers noted his lack of enthusiasm.

“They shared the [WWHL] research and there was a thing in the research that said there was a percentage of people, and it was small but it really got under my skin, that said I looked bored. And I was like, ‘That’s really bad. This is my dream. This is a gift. Do not take this for granted.’ That was a major thing [for me],” he confessed.

While Andy and Vicki butted heads at the reunion, Andy had nothing but good things to say about Vicki on her podcast and made it clear that he appreciated how she remained true to herself throughout her 14 seasons on the show. He then joked about her cluelessness about the internet.

“You have a level of unsophistication in relation to things relating to the show,” he began.

After noting that RHOC began airing before the internet and blogs were as commonly used as they are now, Andy revealed Vicki has actually contacted him to have certain articles about her and the show removed from the internet.

“There would be articles that you didn’t like and you would call me and be like, ‘Get this taken off the internet,’ and I’m like, ‘I can’t do this,'” he recalled. “And you’ll still send me an article today that has nothing to do with anything [and be] mad at me and I’m like, ‘Vicki, read what I’m quoted as saying.'”

“But I like that because you are just you,” Andy added.

As for the biggest misconception he’s seen in the world of reality TV, Andy said it was the many claims of scripting shows and fabricating storylines that were mostly untrue.

“A lot of people think that the stuff is staged, [or] that we have a script,” he explained. “It’s not their storyline. It’s their life. People think we are sitting around coming up with stuff. We couldn’t come up with any of this.”

New episodes of Whoop It Up with Vicki are shared by Westwood One on Thursdays.