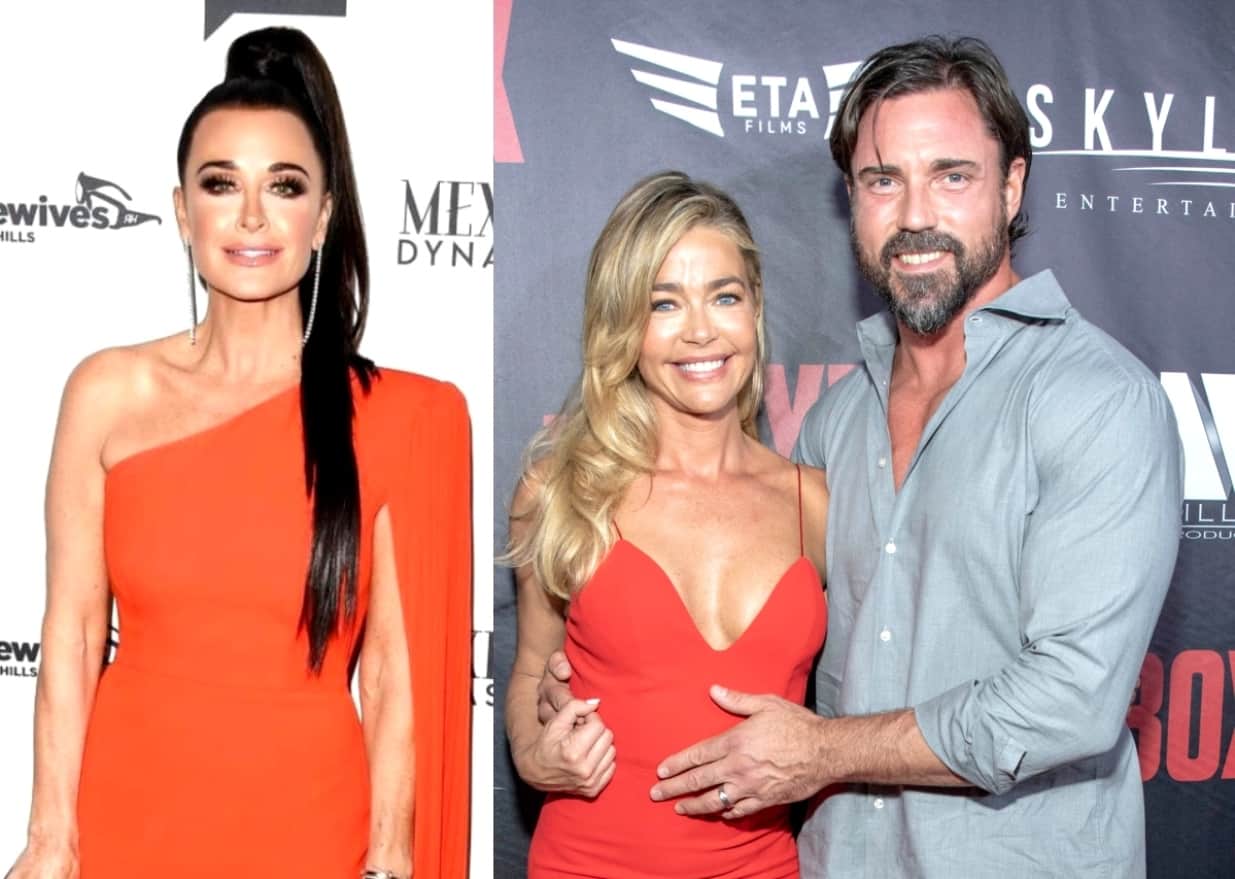 Kyle Richards is dropping some behind the scenes tea as she explains what went down in the scene previewed on the season premiere of The Real Housewives of Beverly Hills during which her co-star Denise Richards was seen saying, “Stop. Bravo, Bravo, f–king Bravo.” Also, a new report is revealing how Denise’s husband Aaron Phypers feels about those explosive affair rumors involving Denise and Brandi Glanville.

In a juicy teaser at the end of the RHOBH season 10 premiere episode, we got a sneak peek of the drama leading up to Denise’s decision to stop filming with the group, with a dinner scene where Denise breaks the fourth wall after reaching her limit.

Kyle Richards seems to have the answer to the fourth wall mystery, citing a theory in a recent interview.

The RHOBH OG explained that in Season 1, she and her co-stars would touch up their makeup while cameras were down on a break or equipment change.

“If the cameras came back up and we don’t want them to film us yet, we would joke and say, ‘Oh, Bravo, Bravo, Bravo. Hi, Andy Cohen,'” Kyle said to Bravo’s Daily Dish podcast. “And then laugh so they wouldn’t use the footage because you can’t break the fourth wall because they don’t acknowledge that we’re on a show.”

Kyle presumed that Denise must have gotten word of this RHOBH strategy and used it to avoid having a serious conversation with the ladies and give production to show what was said.

“So I guess someone told Denise that, that we used to do that. But that literally was 10 years ago,” Kyle explained. “Denise started saying that when she didn’t want what we were talking about [in Season 10] to be used. She was like, ‘I’m just gonna start throwing that out there, and they won’t use the footage.’ And then they did.”

In more RHOBH news, despite the allegations by Brandi that she and Denise had an affair following her wedding to husband Aaron, sources close to the couple maintain that everything in their marriage is going smoothly as they also share what Aaron thinks of all the drama.

“Denise and Aaron are going really strong despite all of the rumors and stories,” a source told Hollywood Life on April 16.  “Aaron doesn’t believe the rumors for one second. She’s really ready for the season to come out as she feels like her side will be seen and she can’t wait for the viewers to see her truth. Denise knows she said certain things about the ladies, however, they’ve also said some not nice things about her which will come out as the season progresses.”

The alleged relationship between Denise and Brandi originally came to light in January, when stories surfaced that the two had engaged in a “months-long affair” in early 2019. Denise’s rep maintained the rumors to be false, but Brandi’s ensuing comments made everything a bit more knotty, ultimately resulting in Denise sending a cease and desist (or, you know, a “legal STFU“).

“She’s disappointed the other ladies seemed to believe Brandi, but there’s nothing she can really do about what other people see or think,” continued the source. “She’s a professional and she’s ready to re-live everything even though she wishes it never happened. She’s just glad to get her side out there.”

Although the source claims Denise is ready to “re-live” all the drama, she clearly didn’t want to live the rumors down while filming with her co-stars.

The Real Housewives of Beverly Hills airs every Wednesday at 8 p.m. on Bravo.