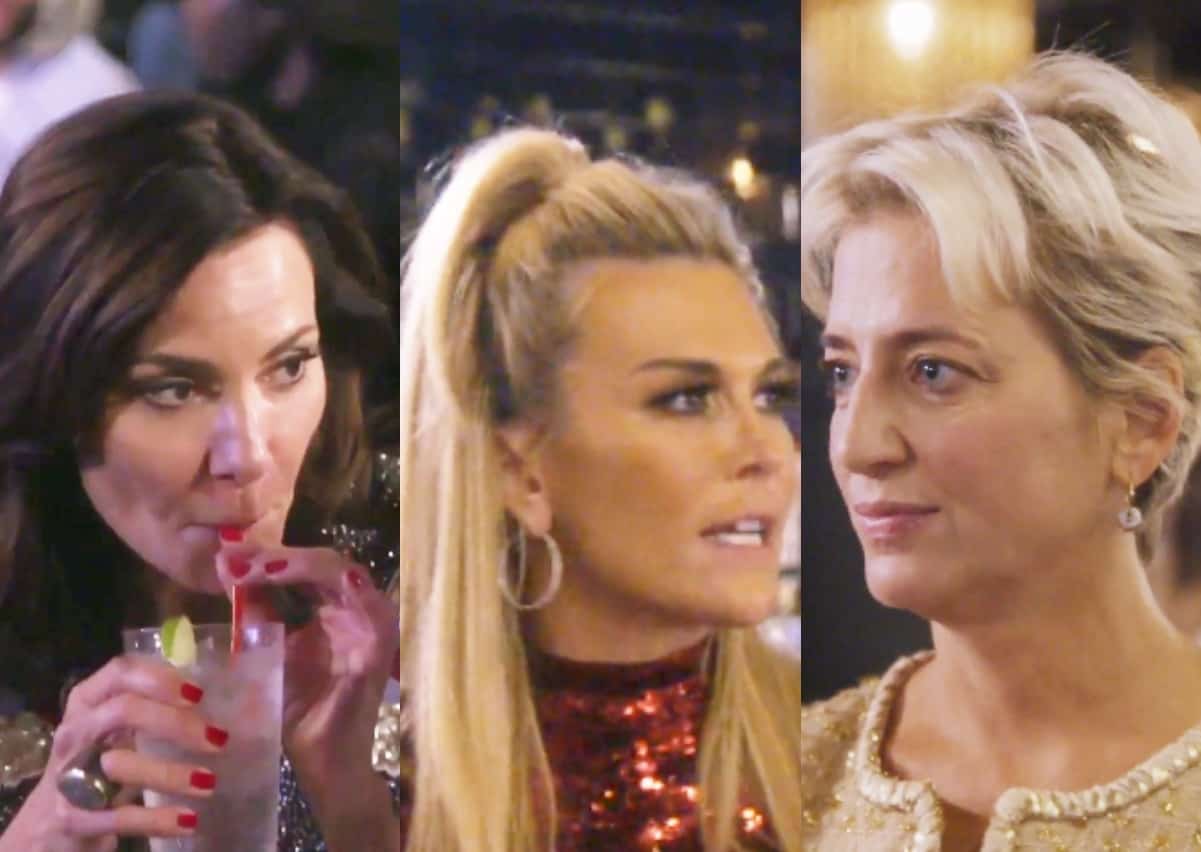 On this week’s episode of the Real Housewives of New York City, Luann is performing in her show with her old flame Jacques, and her drinking becomes an issue this week.

Luann and Jacques are having lunch and production shows their four-year-long love story. They did seem to have chemistry back then. Maybe a rekindled love connection? Hold up! He is now engaged. Bummer, she let that one go over a jacked-up wannabe Johnny Depp pirate!

Luann shares what is going on with her sobriety and probation. It is amusing that she is asking Jacques, a wine merchant, about sobriety. It is like asking a drug dealer, “Should I go to NA?”

Did Jacques just say he is doing standup comedy? I never got the witty vibe from him. Luann plays “Feeling Jovani,” and as he grooves to her tune, he asks who is Jovani? Lol, too funny. I kind of love that he obviously has moved on and isn’t listening to Lu’s autotuned soundtracks.

Dorinda is visiting her ghosts of the past at her old townhouse. I honestly think she never got over Richard. She definitely has had a very interesting life. Dorinda has met some very influential people in her past. I just don’t get how she went from someone like Richard to John…

Dorinda goes to one of her and Richard’s favorite restaurants, Nello, to meet the ladies. She is literally at one of her favorite haunts.

Sonja is at the table doing some sort of liquid fast for five days.  She is literally shaking from her lack of carbs. True confession: I tried this crap during this quarantine and I could only make it through one day! SIGH, it was brutal! Sonya is salivating over everyone else’s food, and she is also defending her choice of attire for Leah. Own it, Sonja with the sexy J! You were shading the newbie!

Ramona, Elyse, Dorinda, and Sonja discuss Tinsley and her lack of sharing her REAL life. I honestly can kind of understand why you wouldn’t want to share deets on your relationship with this group of shrews. Tins needs to show her life, I agree, but I wouldn’t want to be judged either on my on and off-again relationship. Just marry Scott already!

All of the ladies discuss going to Luann’s show. They are going to support her wink-wink. This seems to be a theme on the housewives shows this week. On RHOBH it was about “supporting” each other. I think that is code for checking out their competition on who has the best side gig.

Tinsley and her mom Dale meet up for lunch to catch up. Dale is in town to visit her grand fur-babies. Tinsley admits her attraction to Bruce was more about his connection to Chicago. She had hoped Scott would run into them and she would get her happily ever after just like a Disney princess. Tins is like a Toys R Us kid — I don’t want to grow up, I want to be a Disney princess!

Tinsley and Dale are discussing having kids. It is really distracting how Dale’s face doesn’t move when she talks. She has that glossy wax figure look going on. I do agree with Dale on one thing — Tinsley really shined when she walked in that fashion show. Dale would like to be able to croak after Tins has a baby. She was planning on carrying that baby around in her designer purse and stroller with her team of nannies in tow. Sorry, Dale, you are stuck with carrying Strawberry and Shortcake around instead…

Sonja is meeting up with her CEO to discuss her brand. She has to travel to New Jersey to meet with her partner. He has to catch her up on her financials. She apparently is in the red. Sonja is truly clueless about being a businesswoman. She thinks Century 21 is going to bail her company out . The fashion show was a bust. No surprise there.

Leah is FaceTiming with her ex Rob about their daughter. I think she might still be in love with Rob. She would have married him in the past if he had just asked. Leah is lonely and wants to have a healthy relationship. I hope she gets that as well…

Leah’s mom is still upset over her drinking and not talking to her. She claimed while going to confession and repenting her sins the priest was more interested in how many sexual partners she had? She admits she lied about the real number. I used to downplay my sins in the confessional too…

Luann is at her venue, and I think I just saw a sign that said, “Lick me baby one more time.” What kind of joint is this? This place looks like an indoor arcade/swingers club. Lu mentions the podcast/show has something to do with bullying. Apparently, Jacques is going to be introduced with her declaration that she never f**ked the pirate! I don’t think he sees the humor in that intro. I am sure that is a sore subject for him. We meet his new fiancée who seems lovely, good for him.

Leah and Ramona ride out together in the car. She shares she did reach out to her mom per Ramona’s advice. I just can’t imagine taking advice from Ramona. Leah gets teary-eyed and feels like her mom judges her for her failures and doesn’t acknowledge her achievements. Ramona actually gives her sage advice. Who would have thunk it? Suck it up and put the phone down and bring her some lilacs!

It is the night of the podcast/comedy show. Ramona doesn’t understand the whole podcast thing. Leah looks great — not like the other ladies thought she would. She thinks they expected the whole “whore on 42nd street” look.  Dorinda wants to have lunch with Tinsley and Leah. Hmm, I wonder why she wants to do this? Production influenced maybe?

Before the show, Jacques asks Ramona and Dorinda about bullying. Production shades them both with lots of examples of their bullying others. Telling Sonja she has an E-Z pass on her vagina!  Sorry that was one of my favorites of Dorinda’s shade! Leah is willing to forgive Sonja because all she did is give her a jacked-up pair of pajamas, she didn’t bang her boyfriend. Not yet anyway, give her time…

The ladies discuss Luann’s drinking and she claims the whole Tom deal drove her to drink. She thinks that she has PTSD. Luann then reaches for a glass of vodka thinking it is water and takes a sip. Dorinda is defending her taking a drink . Elyse is confused because Lu is in AA, allegedly.

We finally get to the “Chanel in the City” podcast. Dorinda is unsure what the cause is tonight. Bullying, women in prison, comedy, what kind of range of emotions are expected at an event like this? I would be confused as well! Luann in her Elton John glasses prances up to the stage. She reads her diary sharing what she thinks is funny. The jokes fall flat and her lack of awareness is transparent.

Lu then introduces Jacques with the “I never f**ked the pirate” proclamation. She will never just own that. Lu throws Sonja under the bus that she did f**k the pirate as I recall au natural against a tree .

I have to agree with Sonja that Jacques’ accent is distracting and it’s a bit difficult to understand his jokes. Talk about lost in translation! Sonja gets called out by Jacques for talking during his show. She needed closed captioning to follow!

We then have some random standup comics that no one is paying attention to. They are all paying more attention to their phones. Sonja couldn’t even drink or eat through this. What a bummer for her.

Sonja wants Luann to refrain from drinking — until her fast is over. Tins and Sonja go down the slide in their dresses. Doubtful Sonja was wearing underwear!

While discussing Tins and Dorinda’s problems, Leah tells Dorinda that she can be a little intimidating. Dorinda thinks Tinsley is afraid of even a butterfly.  Tinsley thinks she doesn’t need a mediator with Dorinda. Whoa, Dorinda’s tequila is kicking in and it gets a little heated. This event is about bullying for goodness’ sake. Tinsley keeps saying she doesn’t need Leah to mediate, and for some reason, this is rubbing Dorinda the wrong way!

“Everything I do with you Tinsley is not good,” says Dorinda. Here we go again! However, Tinsley isn’t backing down as she insists she doesn’t need Leah there to help her and Dorinda resolve their issues. Dorinda then decides to leave.

“I’m not going to stay here and listen to this,” says Dorinda as she walks away from Tinsley, who keeps repeating how she simply wants them to fix their issues without outside forces. Those two are like bulls with their designer horns stuck together. It is going to take more than a pimp in pajamas to fix this relationship!

Next week on Page Six, John and Dorinda are breaking up. Dorinda is still all up in Tins business. They also head to a winery. What could possibly go wrong? I will see you all next week and take care!