Home Real Housewives of Beverly Hills News RHOBH Star Teddi Mellencamp Implies Dorit Kemsley is a Hypocrite for Obsessing Over Her and Kyle Richards Sharing a Bed and Addresses Their Feud, Reveals Which Costar She’s Closest to Other Than Kyle

RHOBH Star Teddi Mellencamp Implies Dorit Kemsley is a Hypocrite for Obsessing Over Her and Kyle Richards Sharing a Bed and Addresses Their Feud, Reveals Which Costar She’s Closest to Other Than Kyle

by Lindsay Cronin May 9, 2020 101 comments
ShareTweetWhatsappPinterestRedditTumblrMailFlipboard 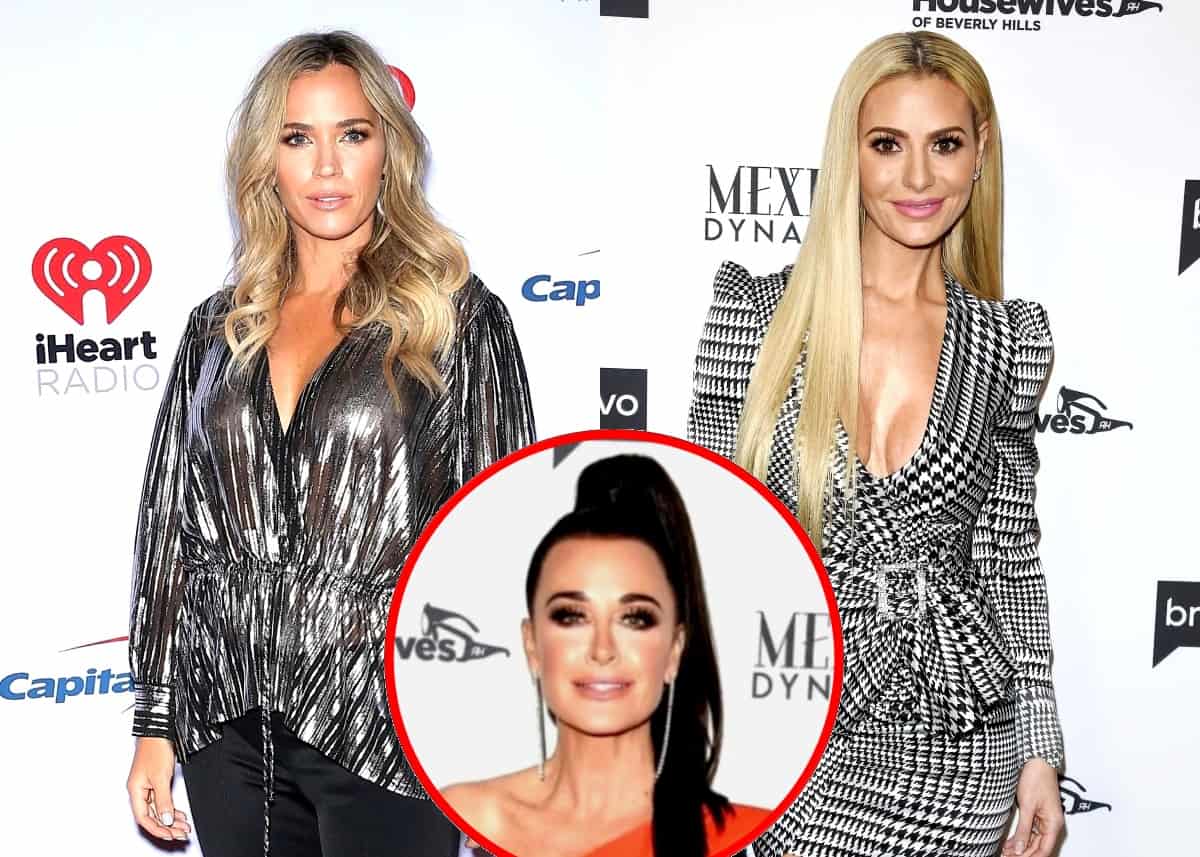 Teddi Mellencamp can’t seem to make any positive progress with Dorit Kemsley on The Real Housewives of Beverly Hills.

Following Wednesday night’s episode, which featured a very glammed up Dorit arriving late to her wellness retreat, Teddi took to her Instagram Stories where she explained why she was annoyed with Dorit, revealed why Dorit had no grounds to make a big deal about her sharing a bed with Kyle Richards, and revealed which of her co-stars she’s closest to during a Q&A session.

“After watching what you’ve seen, who are you more annoyed by [Sutton Stracke] or Dorit?” one fan asked.

“This episode, Sutton and I kind of work through our situation. I say that I overreacted, she apologizes and that’s that,” Teddi shared.

Meanwhile, when it came to her interaction with Dorit, Teddi said they couldn’t seem to move forward.

“With Dorit, the hard thing is I feel like we’re always going in circles. We’re back on that hamster wheel,” she explained. 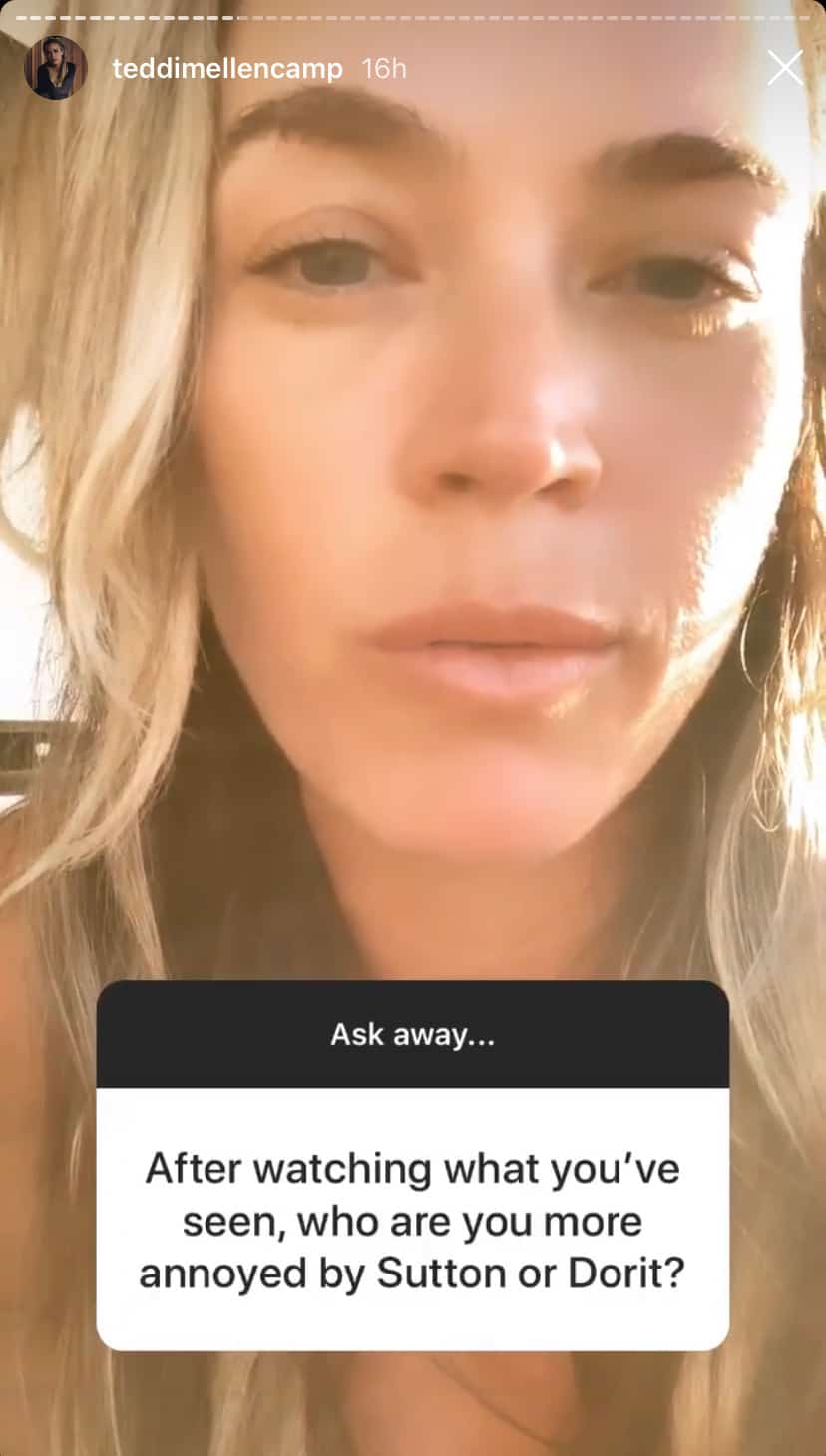 “Are you still friends with everyone on the show?” another fan asked.

“It’s hard because watching back the episodes, there are things that happen that you don’t realize… You watch stuff back and you get pissed all over again,” Teddi admitted, suggesting that her relationships with the RHOBH cast have changed in the weeks since season 10 began airing. 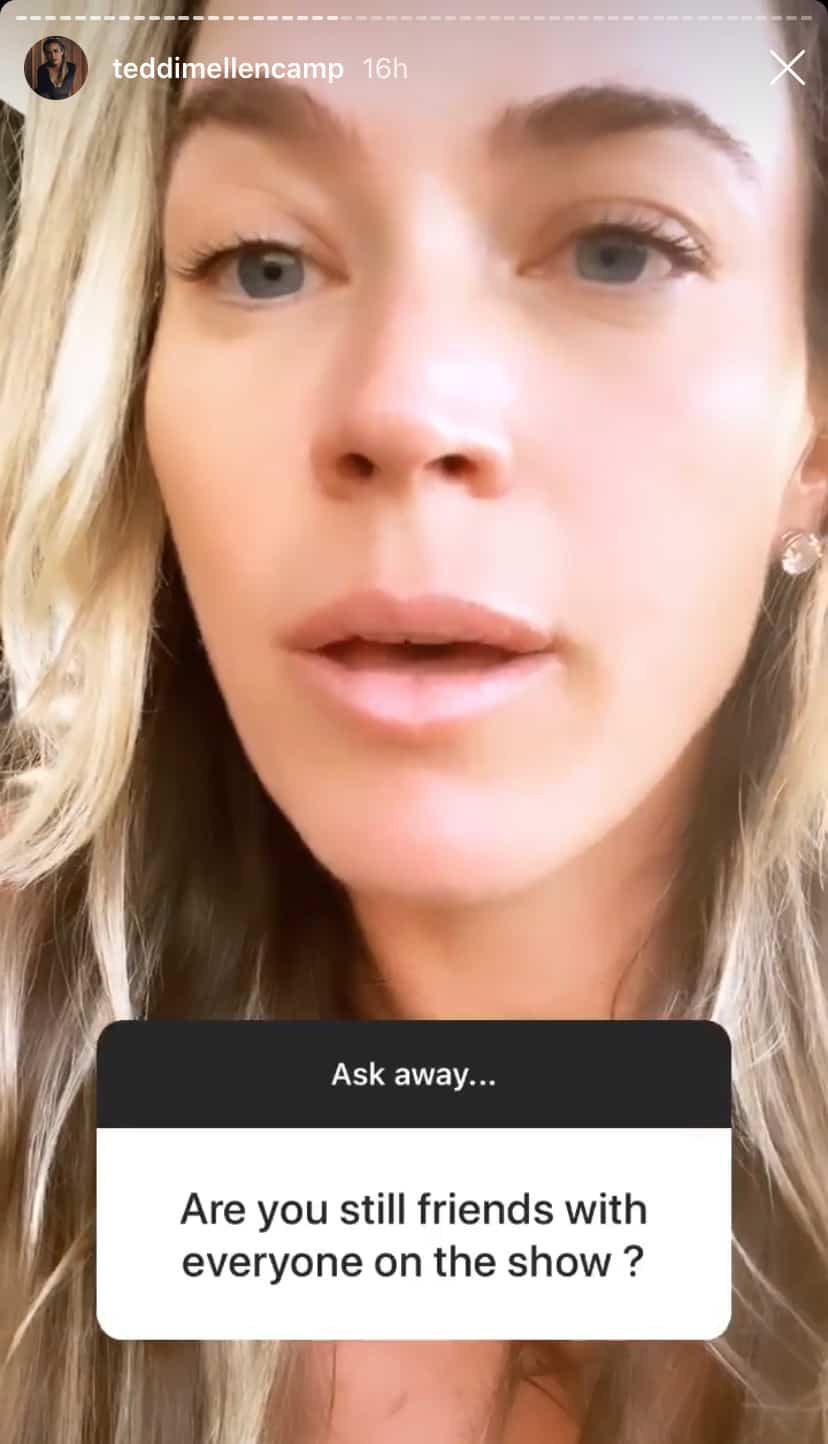 During the latest episode of the show, Dorit locked in on the fact that Teddi and Kyle had shared a bed, and after a fan on Instagram asked Teddi why Dorit was “so obsessed” over the issue, Teddi revealed why it made no sense that Dorit had mentioned it.

“When they all stayed at my house here in Orange County, Dorit slept in my bed,” Teddi shared. 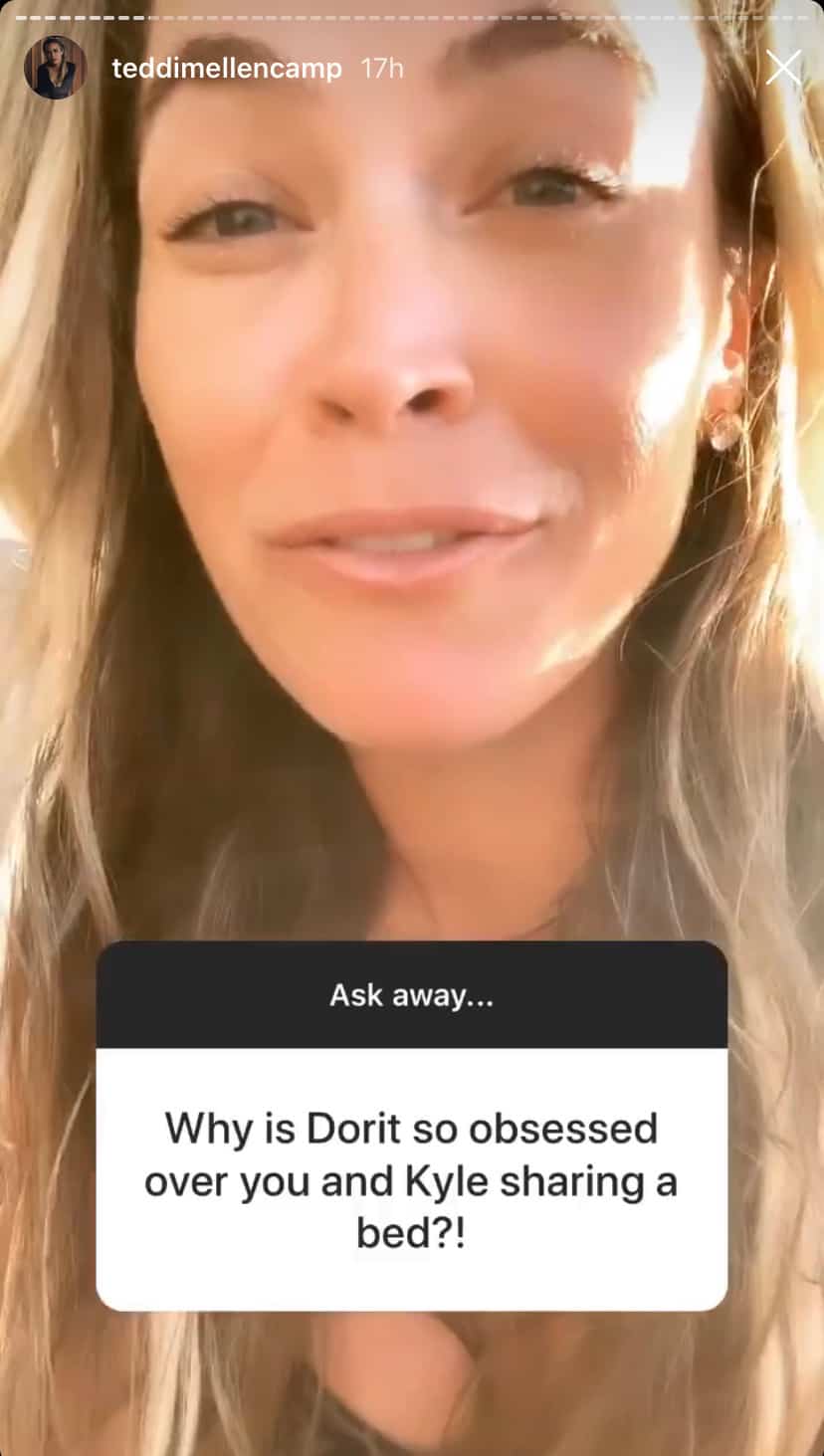 While the cast’s behavior at her All In event was a big focus of Wednesday’s show, Teddi admitted that she wasn’t too concerned after they opted out of her meditation session.

“Watch it back it was like, eek. But in the moment, truthfully, all I really cared about was that the people that paid to attend the retreat were truly enjoying themselves and they did. And that’s where I was focused,” she explained. 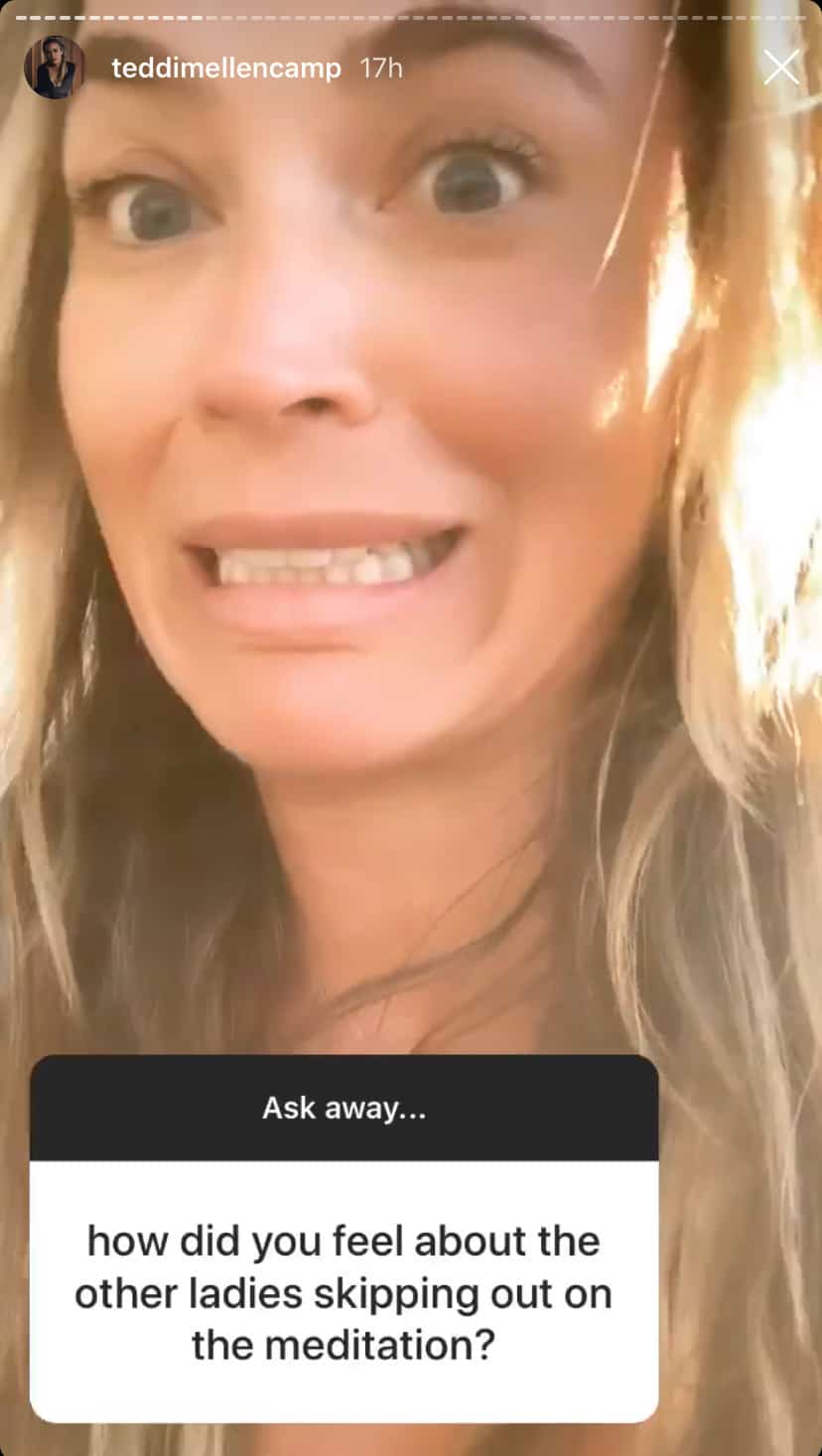 Because Teddi has grown so close to Kyle in the years since she joined RHOBH, the two of them have often had to defend their relationship, which Teddi doesn’t understand.

“I think that Kyle and I have a real and authentic friendship and I don’t really know why I need to justify that. It is what it is,” she told one curious fan. 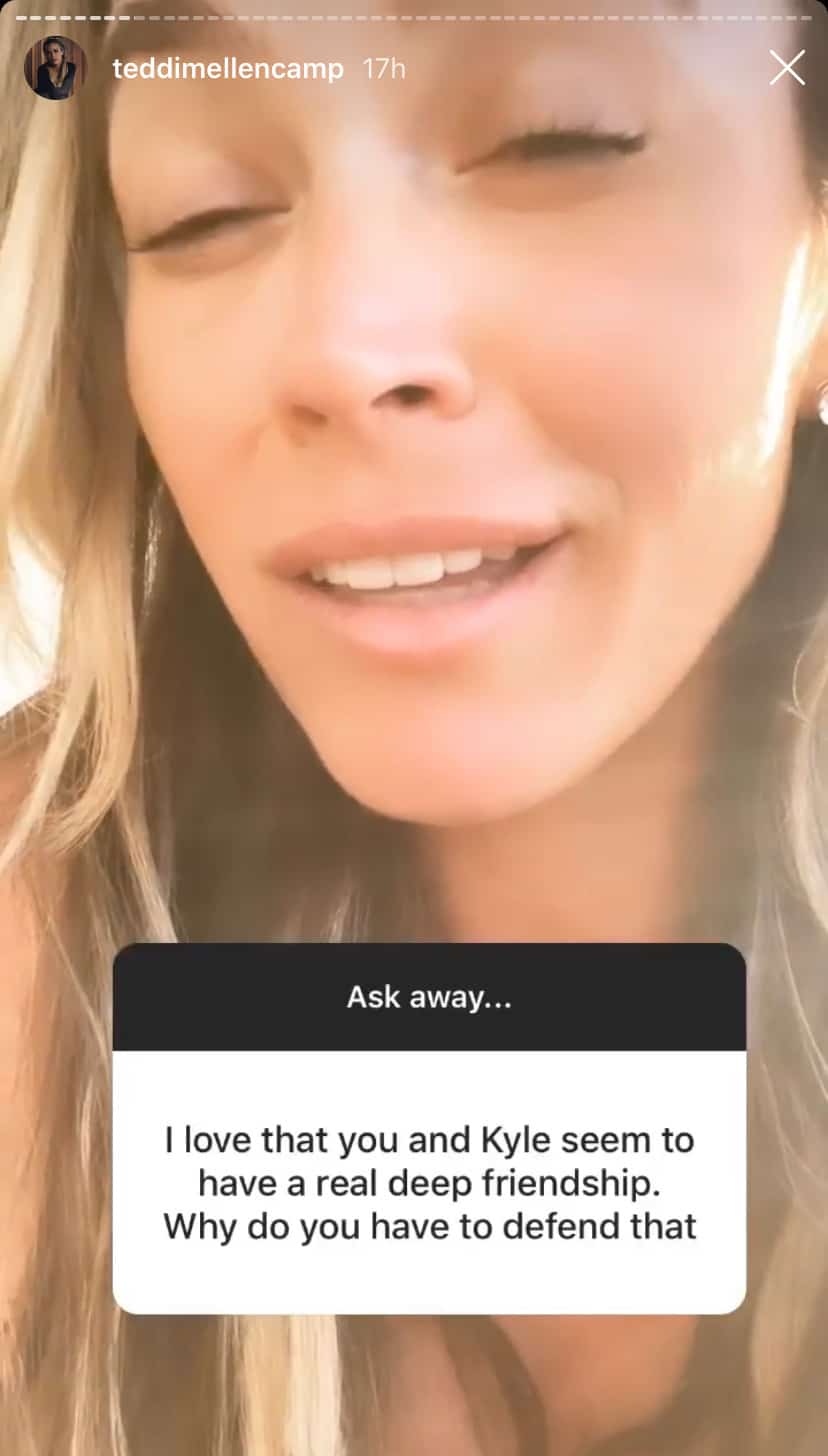 In addition to sharing a close friendship with Kyle, Teddi is also close to several other members of the RHOBH cast.

“Besides Kyle, who from RHOBH are you closest to?” someone wondered.

“I probably hang out and talk to [Lisa Rinna] the most,” Teddi revealed. “I talk to [Erika Jayne] often and as crazy as it may seem after [Wednesday’s episode], also Dorit.” 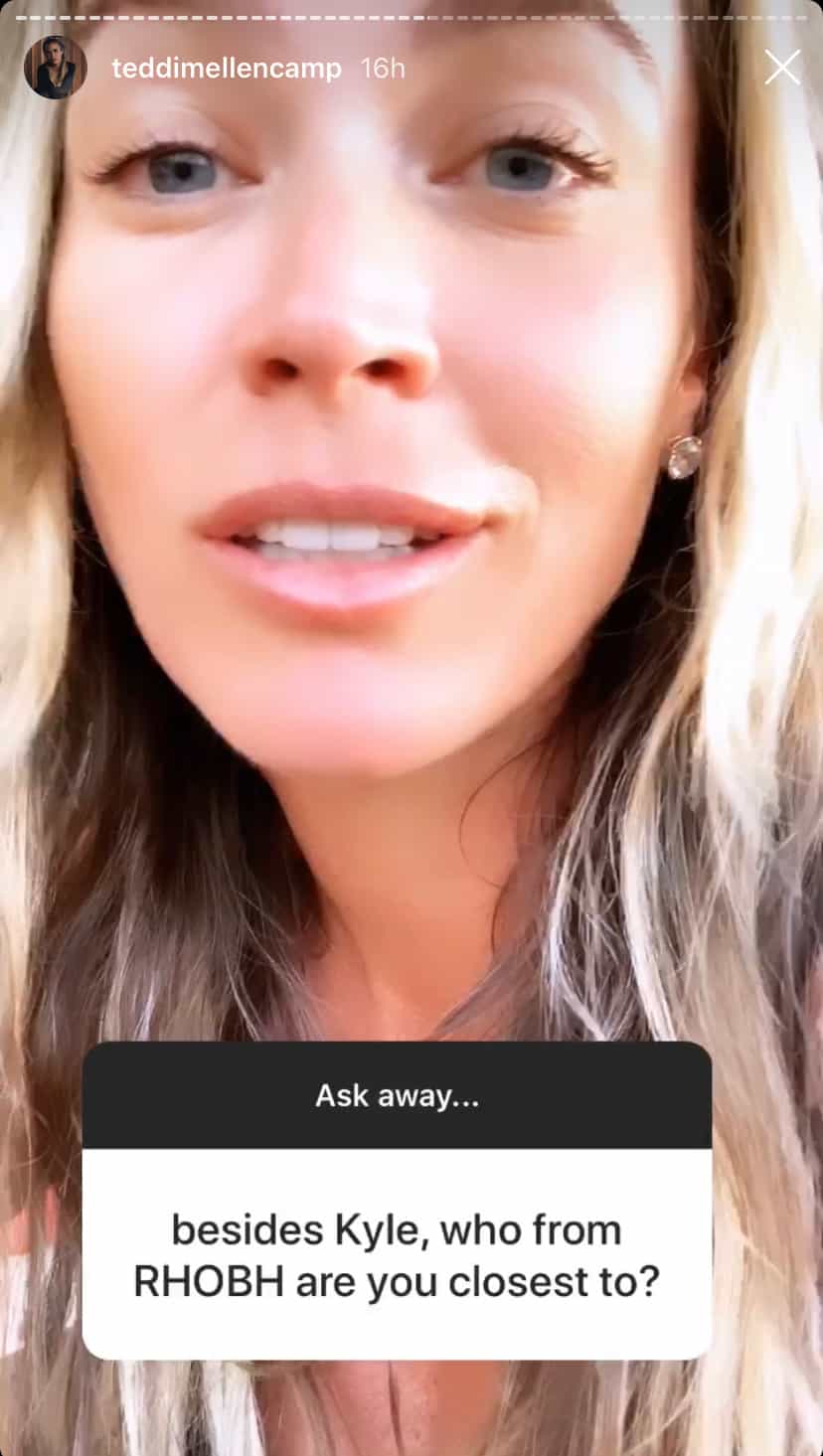