by Elizabeth May 11, 2020 167 comments
ShareTweetWhatsappPinterestRedditTumblrMailFlipboard 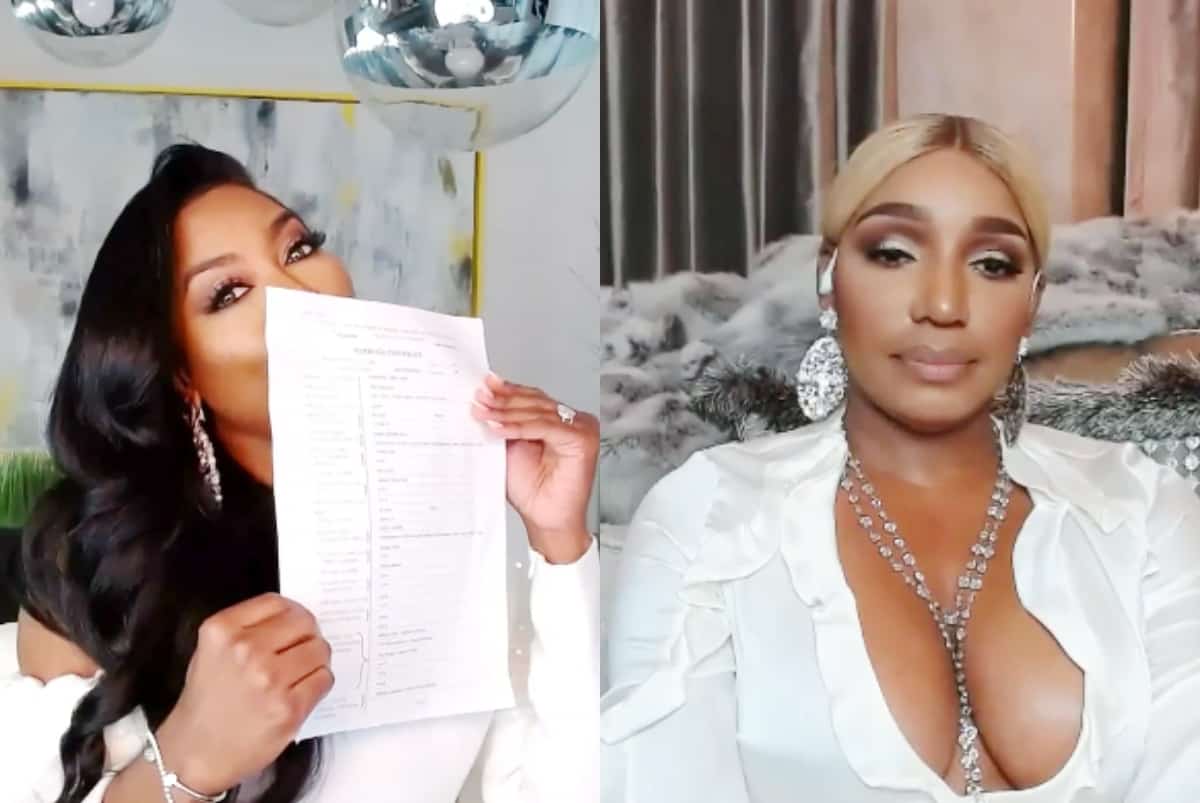 This week, the ladies of the Real Housewives of Atlanta, are back virtually for episode one of their reunion! How will they be able to capture all of the drama on video cams via Zoom? They don’t disappoint right out of the gate!

We see all of the pre-game prep for this virtual reunion. Marlo reads her bible while preparing for filming. She needs some scripture and a rosary to survive this reunion. They all are dressed in white in a configuration like the Brady Bunch show.  We start off with Kenya, Cynthia, Nene, Porsha, and Eva for now. I think the fashion winners are, of course, Cynthia, Eva, Kandi, and Kenya. Porsha is wearing some kind of corseted outfit with a crown to shade the others and huge eyelashes. Nene’s huge boobs are precariously hanging out of her dress and it isn’t very flattering.

Kenya is already starting to shade the other ladies any chance she can get. Nene’s single is doing well . We get to see Kandi’s baby, Blaze #precious.  Cynthia is still getting married on 10/10/20. Porsha is smiling and happy for now…

We begin with the alleged reincarnation of Nene/Nay Nay this season. We also see the alter ego of Kenya/Ken. Kenya likes Marc calling her Ken. She somehow interprets it as some kind of term of endearment.

Nene admits she called Cynthia a punk and she is sticking to it. I just don’t get Cynthia getting that moniker. Eva names Kandi, Salt Bae. On a side note: she might also be the Night Angel on The Masked Singer too! I get her line of thinking, I don’t think she was being shady.

Nene and Kenya are already coming for each other hard. She claims anything she calls Kenya out on is justified. Andy is right — this is more like the Shady Bunch screen.

We are then treated with clips of Kenya and Marc. Marc wiped his dirty feet on her rug all season long. Kenya claims Marc is now changing and trying to save their marriage. I call bullsh**. Did she just say she is getting Zoom therapy? While this is going on, Nene is not buying this fake relationship and rolling her eyes through this crap. Marc is making a 360, hmm? Doesn’t Kenya realize that means he is literally behaving the same way?

Kenya claims she held him accountable when the cameras were down. Fans are saying it is karma for Kenya after she went after the other marriages, such as Porsha’s and Kim Z’s.

Kenya shared the shade regarding Porsha in order to deflect from her own relationship. She mentions Kordell being a queen because he wanted Porsha’s dress. She also claims he used to beat her and used Porsha as his beard. Wow! That is some new tea, didn’t hear about all that before! Accept your hypocritical self, Kenya!

They bring up Brooklyn’s conception. Nene won’t share who told her that wasn’t Kenya’s egg. Eva defends Kenya over that comment and Nene tells her, “You are just trying to turn that plum into a peach!” The gauntlet is thrown down. Nene is officially on attack mode. You can tell Nene has a hard-on for Eva by saying she is a “has been” and hasn’t walked a red carpet in 17 years. Nene insinuates no one is trying to help Eva hang on to that peach. She might be right about that one. Nene has been on magazine covers! What, National Enquirer? She demands Eva bow down and respect her elders. Andy had to mute these two! Thank God, my ears were starting to bleed!

I have to say someone from Bravo told these ladies to turn things up so dramatically because they were fearful the virtual thing wouldn’t work out. I have one observation: they don’t have to worry about anyone getting assaulted this way. It is like a boxing match of nasty jabs. They can’t even use props to go on the attack. The liability savings have to be huge.

Nene and Eva are battling it out about who is the baddest bit** of all! She is not digging being called bipolar and it is pushing a huge button for her. There has to be some truth to that comment.

Kenya mentions how others have said Brooklyn looks like Marc, which is cool since he is attractive. She then insinuates Nene’s kids didn’t luck out in that department looking like Nene. Kenya calls Nene a white woman in drag. It seems like the other ladies are trying to evict Nene from the Atlanta housewives. Kenya claims Nene’s scenes are from the movie White Chicks! LOL, that is pretty funny and a really good movie too!

Nene claims she owns this show and is evicting Eva. They fight over homeownership. There is a debate over who is a spring chicken and an aged chicken? Porsha claims Eva’s boobs are social distancing. Okay, not nice, she just had a baby and not everyone has a Coco and Chanel that are super buoyant.

Kenya shares her marriage license. She proudly shows she is married to that fool. I would have burned that thing in my fireplace . I also would have hired a priest to do an exorcism on my house to remove that bad spirit from my home.

Cynthia is hurt that Nene implied she has been in fake relationships in the past. Nene, very childishly, shuts her camera down when she can’t control the narrative. I certainly hope she doesn’t return. Bye, Wig!

We now get to see Marlo and Tanya since Nene is throwing a tantrum. Tanya is busy baking cookies and looks beautiful.  Marlo is home-schooling her nephews. The home-schooling stuff is hardcore for the parents right now. Good for you, Marlo, …

Nene comes back and claims she had to go pee and change her tampon. I think I just threw up in my mouth. Andy is speechless and quickly changes the subject on that gross image.

Kandi is being called “KMZ the bone collector” this season. Production shows all of the scenes where she is delivering some shady tea to everyone. She claims she just can’t win. I think that was her role this season .

Porsha resents r Eva calling PJ, Dennis with a bow. I am sorry I have said she looks like Dennis all season long. I don’t get why Porsha gets so worked up over that. She wanted to make a baby with this man and marry him. She knew what he looked like and there was always a 50/50 chance she could look like her dad. The old proverb applies, you’ve made your bed and you now must lie in it.

Nene said the same thing and Porsha forgives her. C-section shade, didn’t know that was a thing?  Porsha calls Eva a thumb with lips on it. Someone will have to explain that one to me. Eva is gorgeous and has a beautiful family so maybe she may be a little jelly over that?

Eva is then called out for saying the others have “little nappy heads.” They think she is being tone-deaf since she is light-skinned and has a different hair type. Kenya tries to eloquently defend why that is insensitive. Who knew Kenya could sensibly explain something to Eva without being shady?

We then have to watch Nene’s redemption tour carrying her Birkin bag full of olive branches. There were lots of grand gestures of cheese and crackers. Porsha said snack time is not what is required. Kenya said she was lonely on her dusty old island watching Gregg play with others by herself.

Nene claims her friendship with Wendy Williams is neutral. Wendy referred to Nene as an “over here friend.” Nene is standing by her stupid story that it is a genuine friendship. Kandi thinks that was a strategic plan to stay relevant and Nene needed Wendy to convince Lisa Bloom to represent her against Bravo. Nene refuses to share their private relationship.

The fake sisterhood between Porsha and Nene is called out. Agreed, all of this big/little sister crap is really bad soap opera acting. Not buying it either.

Porsha wants receipts from Kenya on why she doesn’t believe Nene’s apology was genuine. Kandi doesn’t buy that Porsha needed Nene to survive her relationship issues. Nene apparently called Cynthia and Kenya about Porsha getting the Celebrity Apprentice gig. Calling Porsha dumb and making moves was making them concerned she might be trying to crown herself HBIC.

Cynthia admits there was smack talking. Good for you, own it, 53 Cynt. Kenya claims Nene wanted to bring Porsha down a notch or two since she was getting too big for her britches.

Porsha claims she has texts where Kenya was trying to get Cynthia’s a**. She sends a screenshot to Andy of Kenya trying to get rid of Cynthia this season. Cynthia doesn’t buy it. We never saw the screenshot so I am not sure of that one yet…

Kandi isn’t buying this fake friendship between Porsha and Nene. Me neither. Porsha says Nene was there for her when her relationship with Kordell crashed and burned. Nene helped her , and Porsha missed her support. Andy can’t get a word in edgewise and Eva needs another drink. ME TOO! Make it a double, please!

This was tough to recap with all of the split screens and yelling over each other. It was comforting to see even COVID-19 didn’t change the fact that they are still the shadiest group of housewives out there!

See you all next week with more receipts, cookies, and clowns. Take care!