by Lindsay Cronin May 14, 2020 27 comments
ShareTweetWhatsappPinterestRedditTumblrMailFlipboard 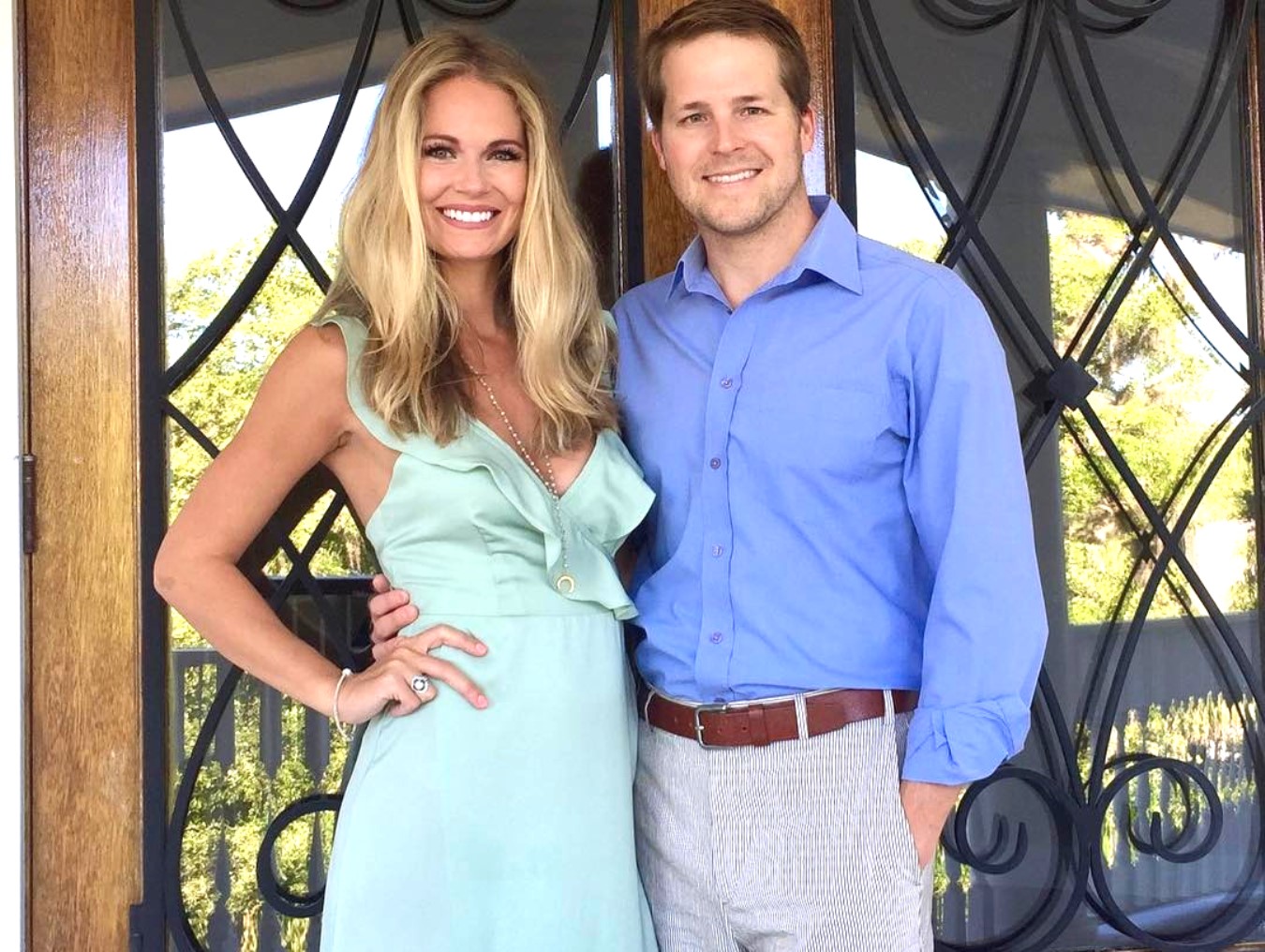 Cameran Eubanks is opening up about her decision to walk away from her role on Southern Charm after starring on the Bravo series for its past six seasons.

After first announcing that she would not be returning to a fan on Instagram on Tuesday, Cameran resurfaced on social media, where she explained the real reason behind her decision to walk away from the show while also slamming a recent report claiming her husband, Jason Wimberly, was caught having an affair.

In a lengthy post shared on Wednesday night, Cameran told her fans and followers that while she planned to make an official statement later this week, she felt she needed to speak up after coming across a rumor regarding her husband’s alleged infidelity.

“While upsetting, it sadly doesn’t surprise me as this is what reality television has come to nowadays,” she explained.

Although Cameran didn’t name the source of the rumor, All About the Tea shared a report just prior to her statement in which it was claimed that she actually left the show to avoid Jason’s alleged mistress, Rebecca Leigh Wash, being exposed by her Southern Charm co-star, Kathryn Dennis. The outlet also said Jason is supposedly “in love” with Rebecca, who works in Charleston, South Carolina as a makeup artist.

“Some things aren’t worth a big paycheck,” Cameran explained.

According to Cameran, the fact that her husband was dragged into the drama of the show was what upset her the most.

“[He] is the most sincere and faithful human I know,” she explained. “He always supported me filming the show even though he wanted no part of the spotlight.”

Jason didn’t appear on Southern Charm for its first five seasons, but he did make a cameo appearance last year during an event at the home of Cameran’s co-star, Patricia Altschul.

“This is what you sign up for when you put life on reality TV…and why I’m getting out of it now,” Cameran continued. “Drama is needed to stay relevant on reality television and sadly false rumors about others are sometimes created.”

Cameran went on to seemingly shade Kathryn, who recently found herself in the midst of a racist scandal. She also encouraged her loyal fans to ignore the report and claimed it was nothing more than a “ploy for ratings.”

“Consider the source,” she wrote. “My decision was made and given to Bravo months ago and had absolutely nothing to do with ridiculous and fake rumors about my marriage.”

Cameran’s full statement can be seen below. 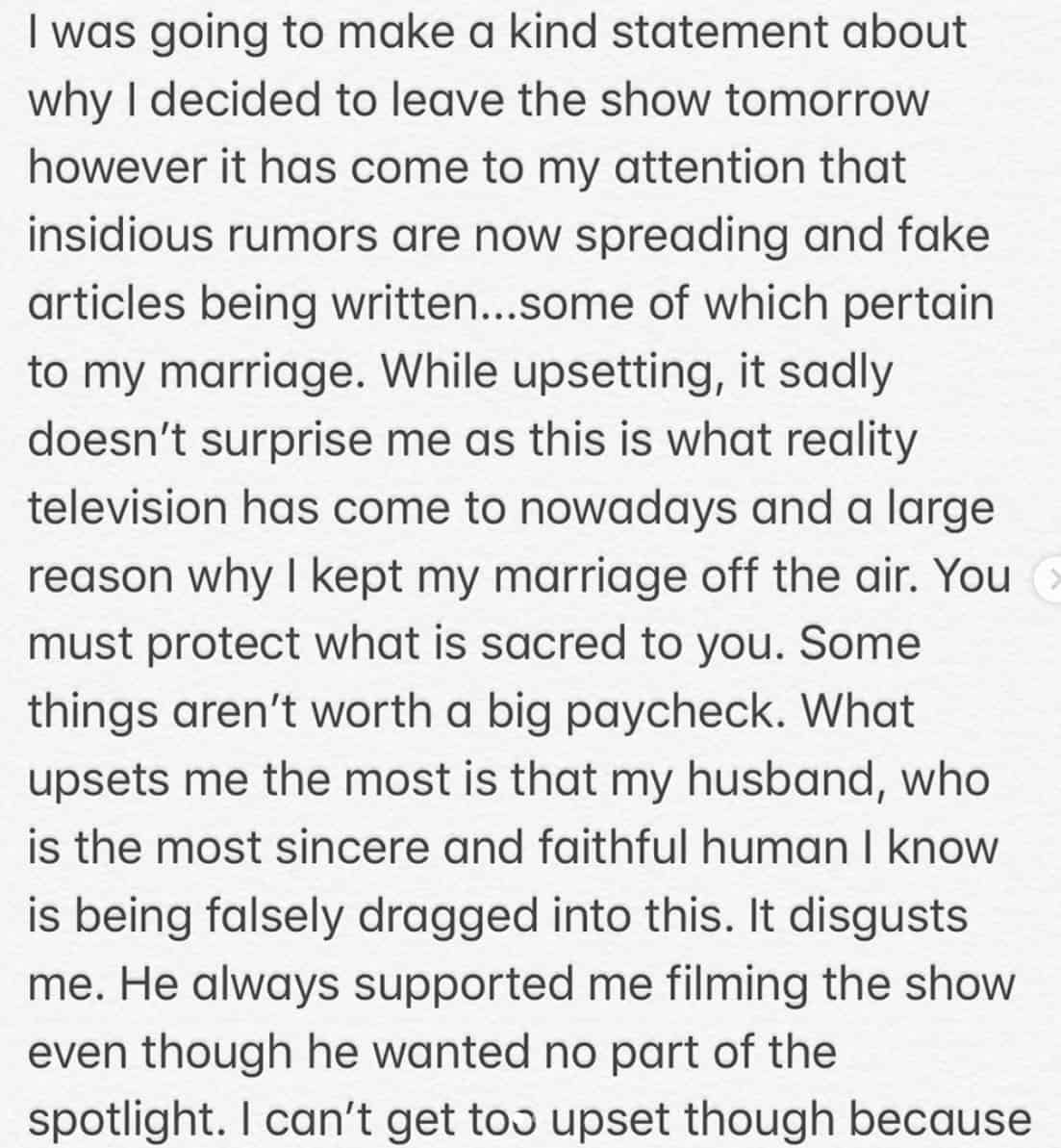 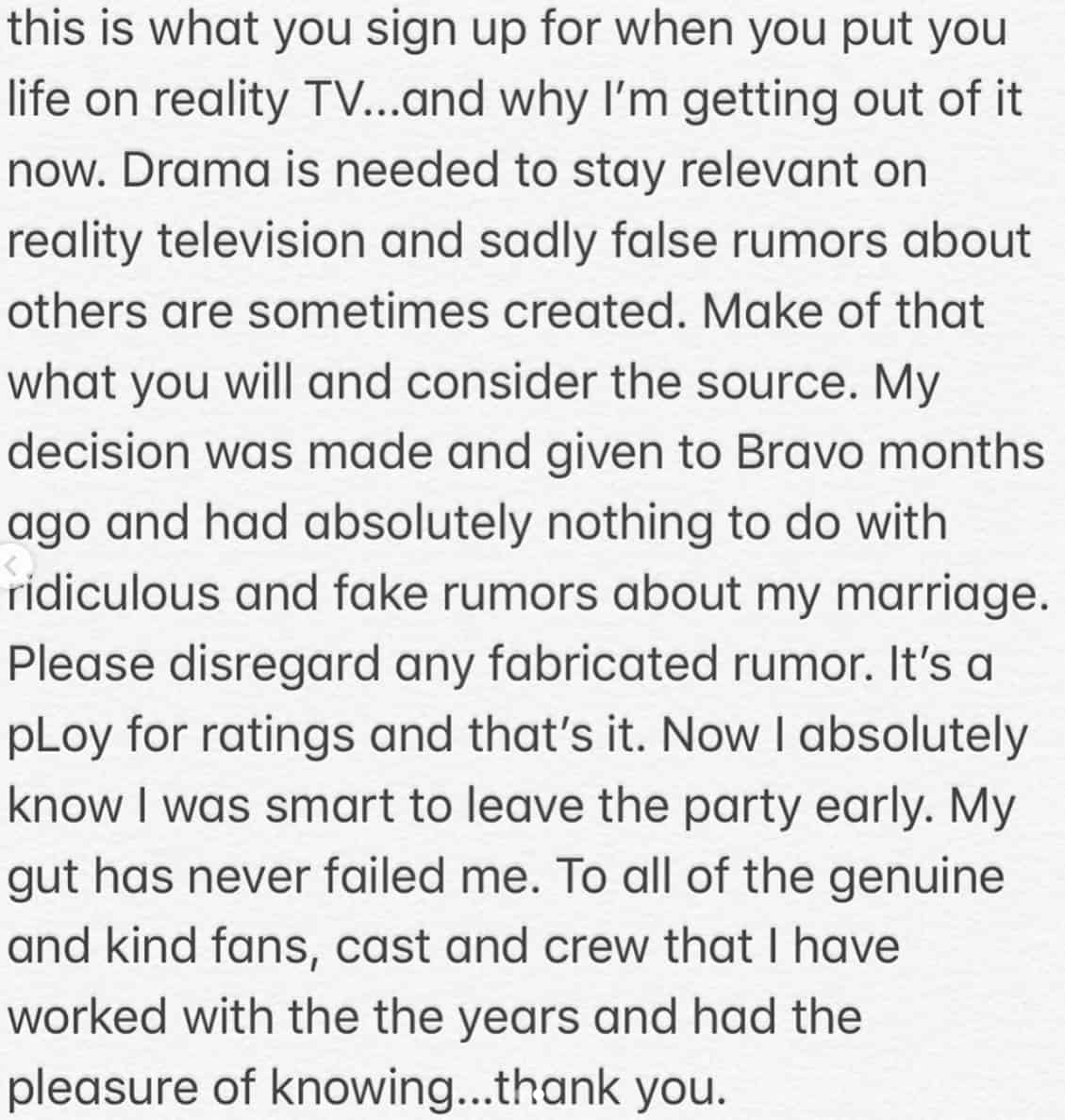 According to the report, Cameran was devastated to learn that producers were allegedly planning to expose Jason’s supposed mistress on Southern Charm‘s seventh season and felt further insulted by Kathryn’s assumed betrayal.

“She went off on Aaron [Haymaker Production Company] — she told him to shove his show up his a** then quit,” their insider claimed.