PHOTOS: Vanderpump Rules’ Scheana Shay Gives Tour of Her $760K Home in Palm Springs, Go Inside and See the Stunning Views of the Eclectic Property 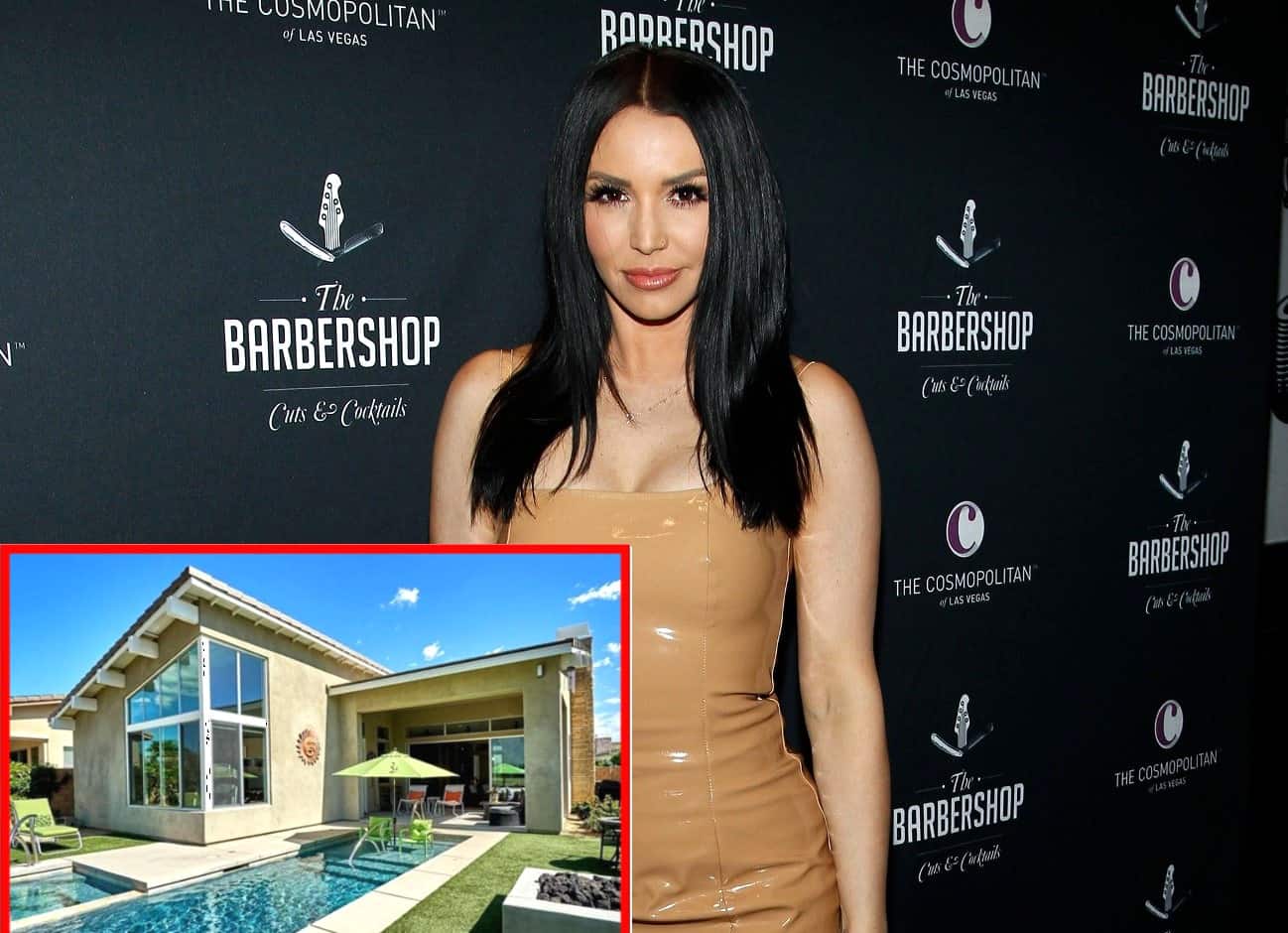 Over a year after purchasing the $725,000 three-bedroom, three-bathroom property, which is now valued at $760,000, the Vanderpump Rules cast member took to her YouTube channel, where she gave viewers a look at the eclectic home, where she’s spent the past several months quarantining with boyfriend Brock Davies.

“Hello! Welcome to my Palm Springs crib. Come on in,” Scheana began in her August 19 vlog. 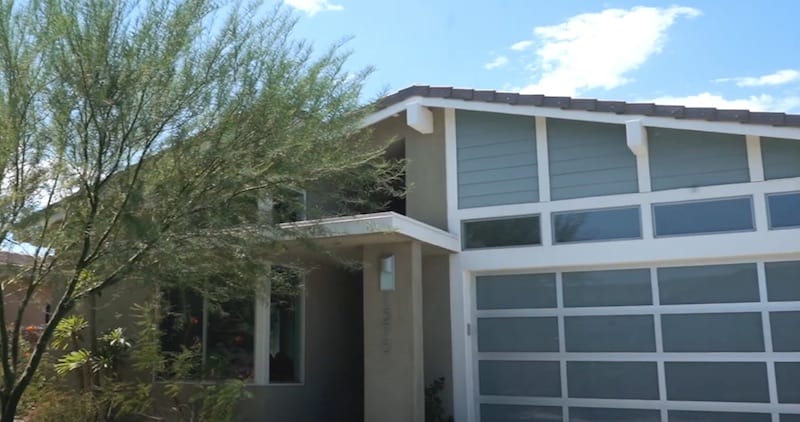 The exterior of Scheana’s home gives off a modern feel. 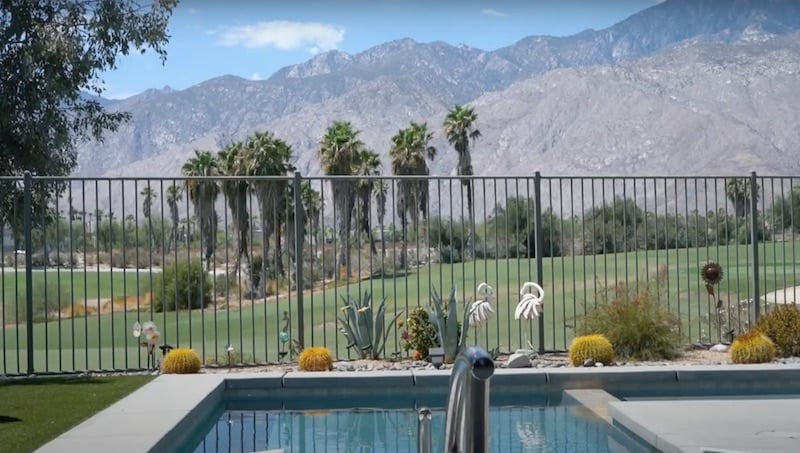 Stunning mountain views can be seen from the backyard of the home.

Inside of Scheana’s home, a number of eclectic items can be found, many of which are in the living room. 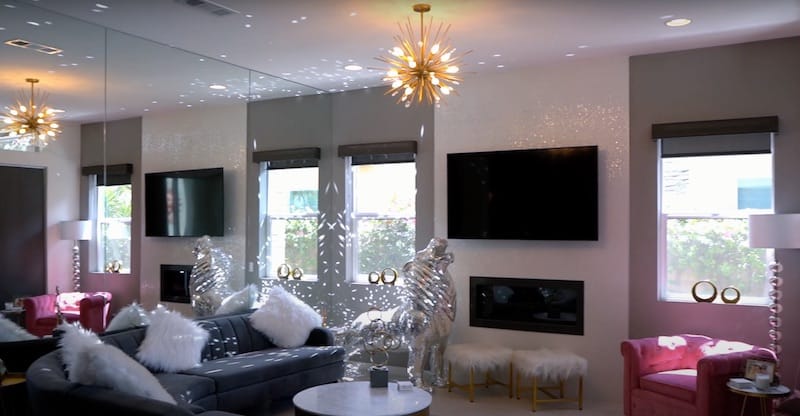 While showing off her kitchen, which boasts a unique backsplash and modern finishes, Scheana gave fans a look at one of her favorite pieces, a serving dish from her cousins.

“I love it. I thought it tied in the colors well,” she shared. 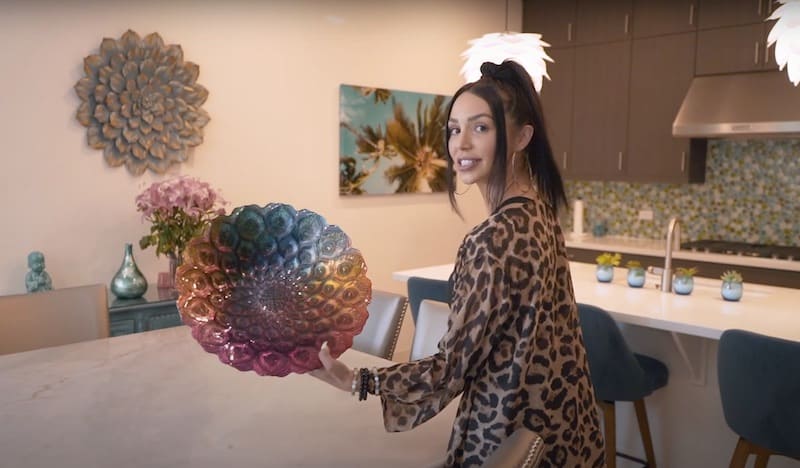 Scheana described her backsplash as “dope.” 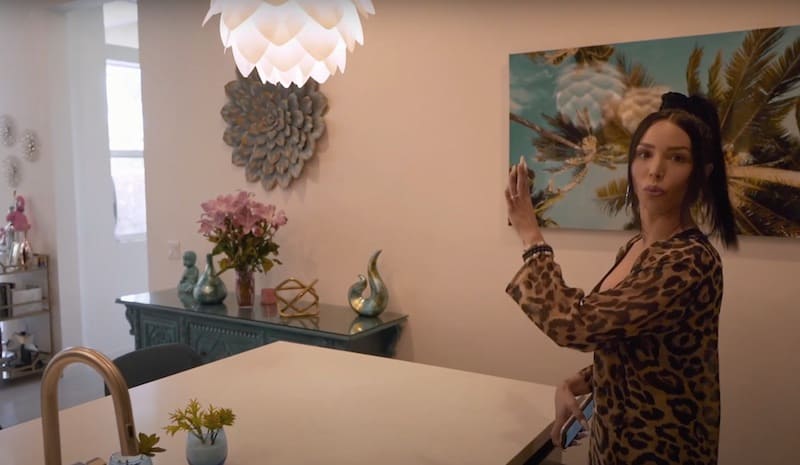 Taking fans into her guest bedroom, Scheana looked back on the many different looks of the room, which now features pink accents and a photo of Audrey Hepburn.

“This room has been through so many makeovers. Literally, it started with bunk beds. Then we had a daybed trundle. And then I realized I needed to make it an actual bedroom since we turned one of our other bedrooms into a den,” she explained. 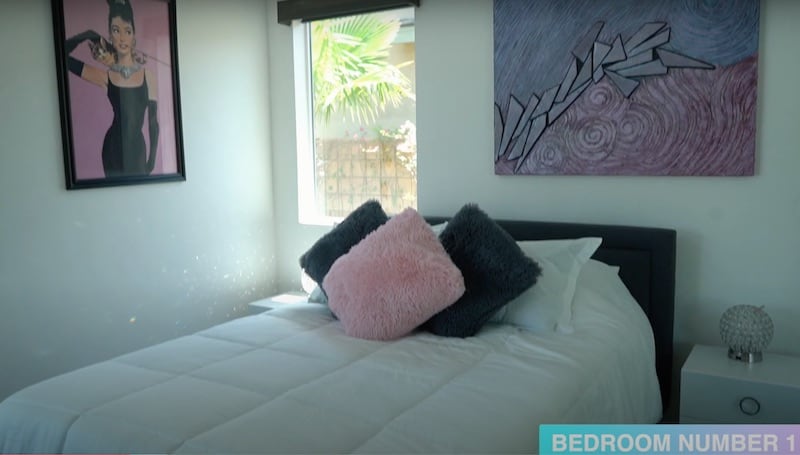 Many of the items of Scheana’s guest bedroom were purchased from Amazon.

“This is technically the third bedroom but we decided to keep it opened up. I like to lounge in this room. It’s a little more comfy and it’s darker than the others with all of the big windows.” 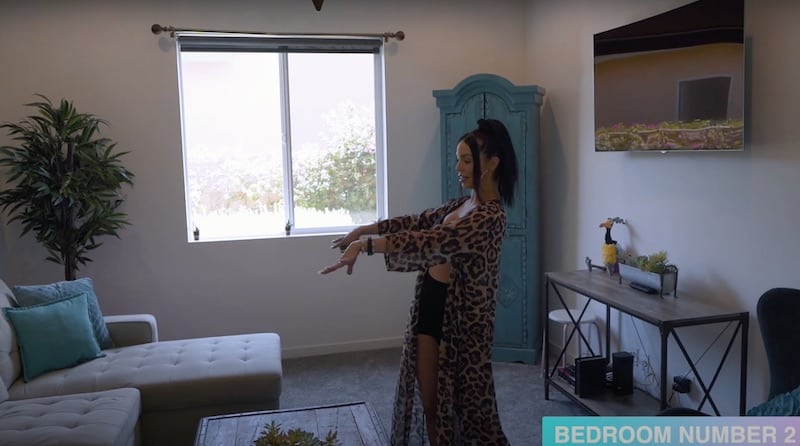 Scheana’s den has a couch that folds out into a bed.

Scheana’s master bedroom, where the “magic happens,” features wall art from Ross, a house for her cats, and a bed draped with a white comforter. 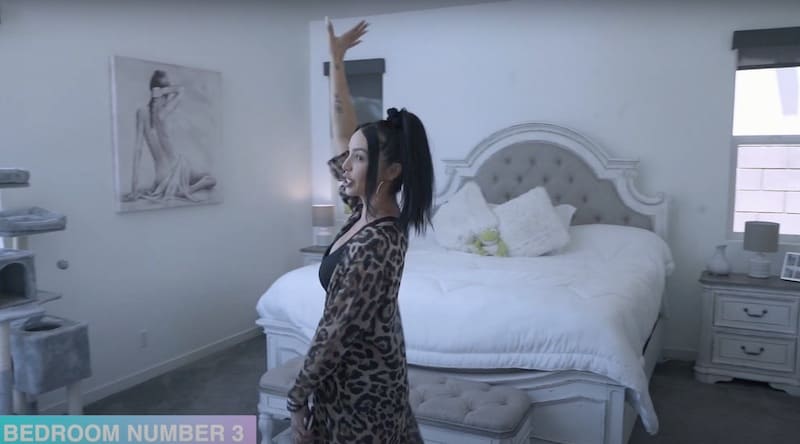 Beyond the bedroom is a “nice, open bathroom.” 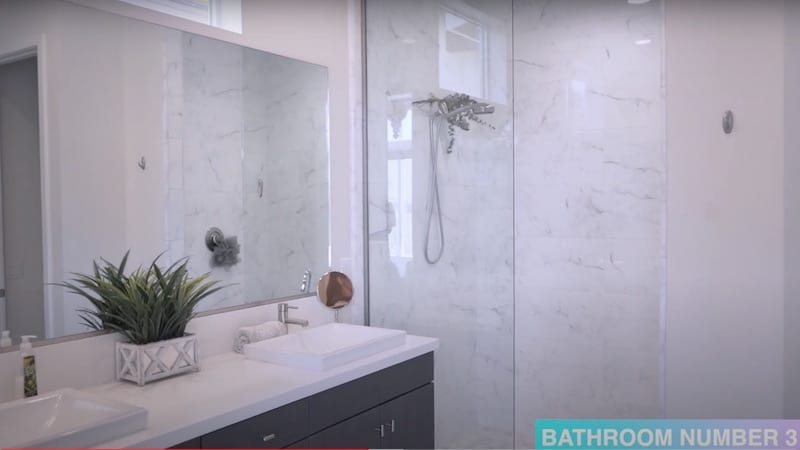 Also in the master suite is Scheana’s closet.

“It took Brock and I hours and hours to get all of this organized,” Scheana recalled, giving a nod to her upcoming “Boy Crazy” merchandise. 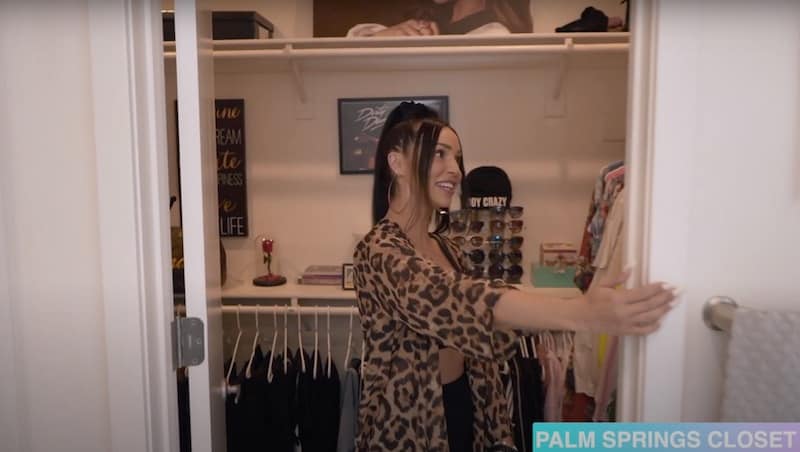 Outside of the home, Scheana can enjoy the stunning views of the mountains while lounging in her backyard.

“The view is everything… That’s what got me,” Scheana gushed. “I saw the golf course and I couldn’t pass it up.” 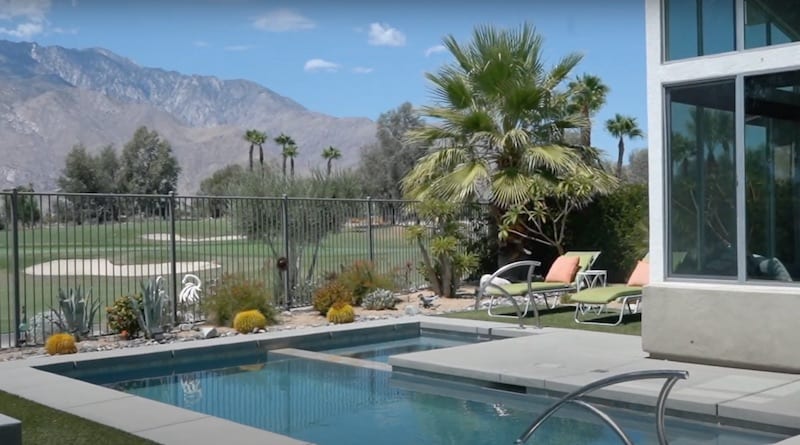 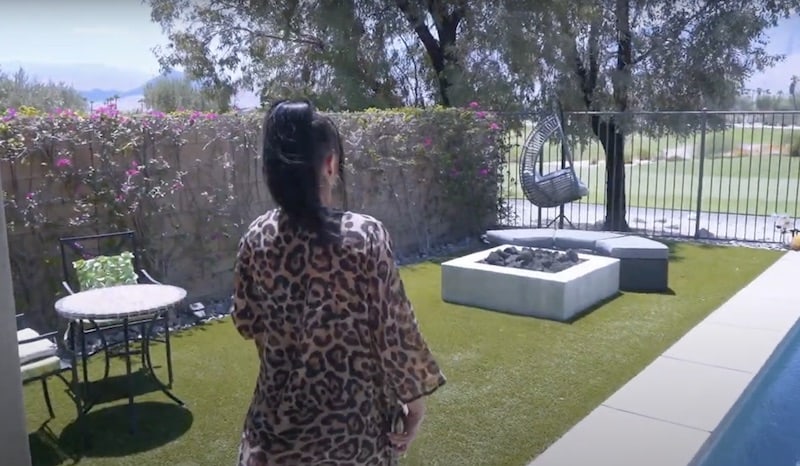