Home Real Housewives of Atlanta News RHOA’s Porsha Williams and Kenya Moore Feud Online Over Claim Porsha’s Activism is For a Storyline as Kenya Claps Back, Plus Porsha Shuts Down Rumor Claiming She Twerked at a Protest

RHOA’s Porsha Williams and Kenya Moore Feud Online Over Claim Porsha’s Activism is For a Storyline as Kenya Claps Back, Plus Porsha Shuts Down Rumor Claiming She Twerked at a Protest 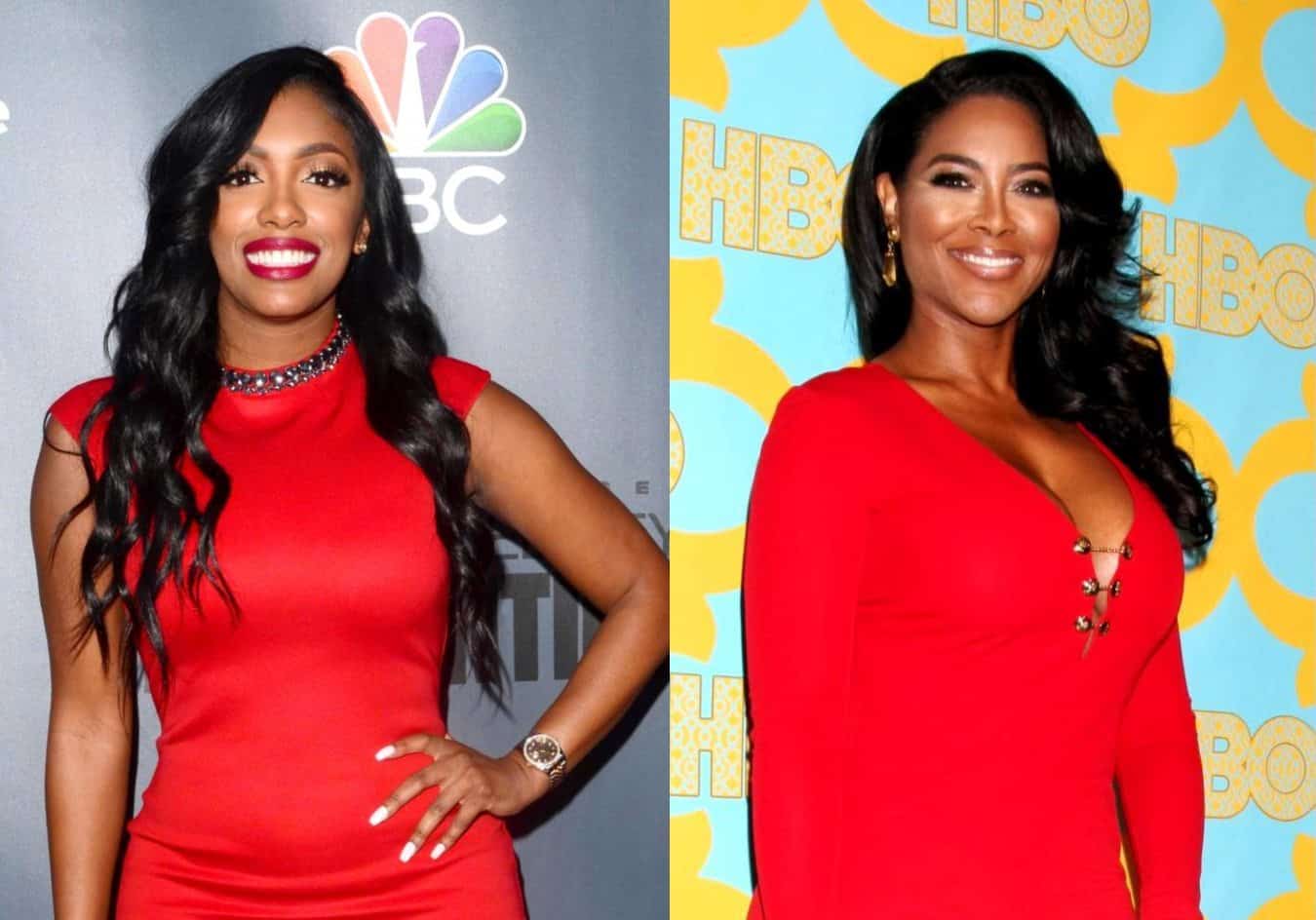 The cast of The Real Housewives of Atlanta recently started filming for season 13, but there already seems to be some drama brewing behind the scenes between Porsha Williams and Kenya Moore.

It all started with a September 11 Instagram post from Cynthia Bailey. She and Porsha took a sweet photo together as Cynthia wrote about some needed “girl time” in the caption and praised her pal for her activism work within the Black Lives Matter movement. As RHOA fans are aware, Porsha has been on the frontlines this summer amid protests. She even got arrested at a demonstration in Louisville, Kentucky while calling for the arrest of the police officers responsible for Breonna Taylor‘s murder.

Cynthia has since turned off the comments for the post, and it’s certainly clear why considering the firestorm that occurred shortly after she shared the photo.

As RHOA The Total Tea posted, Porsha commented on Cynthia’s share by thanking her friend for her support and for being one of her best “KiKi partners.” Then, one user called out Porsha’s activism work for BLM, claiming she was only doing it “for show.” 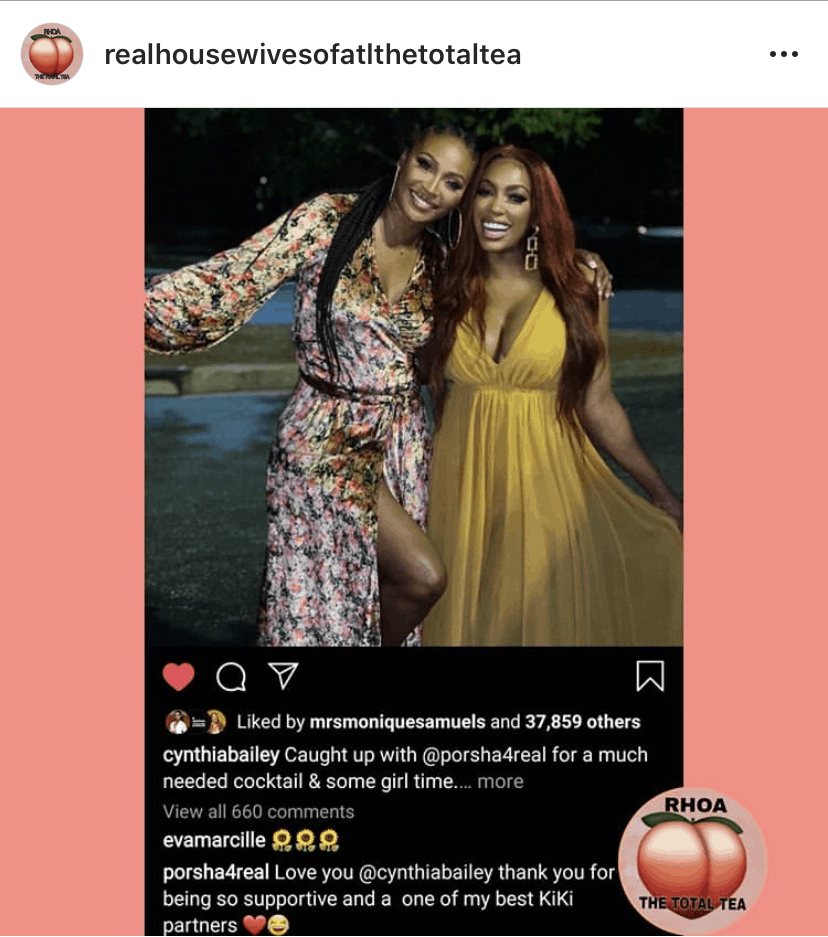 “Porsha is clout chasing,” responded the user to another fan. “This girl is doing all this for show. Glad it is positive but trust it is for show.”

Following that comment, Kenya slyly slid in with her two cents. She responded simply with the “????” eyes emoji, signaling her ostensible agreement or shady take on the matter.

The same user had more to say on Porsha’s being active within the movement, bringing up a misinformed comment Porsha made when she first joined the show.

“[T]his girl didn’t even know what the Underground Railroad is but now sHE’s a CiViL RiGHts LeAdER ???? yeah right,” they stated (re-posted by The Shade of Atlanta). “She needed to clean up her image and needed a storyline. Sorry but not buying it.”

It’s unclear if Kenya’s “????” response here was to this second comment or the first since the comments have since been deleted, but her shade was still felt, as Porsha went on to share her fiery reaction.

In a lengthy response to the user and Kenya’s comments, Porsha defended herself, critiquing the bringing up of “an irrelevant moment from the past” in an effort to discredit what work she’s doing now. Porsha also slammed Kenya for her behavior, saying she should be “ashamed” for her behavior around the matter.

“You should be supporting me as a fellow black woman trying so hard to change this ???? and instead you’re the least supportive person ever!!! If you’re going to spend time bringing awareness to anything, try something positive in life … oops I forgot misery loves company. I’m going to say extra prayers for you and all people on the wrong side of history!!!” 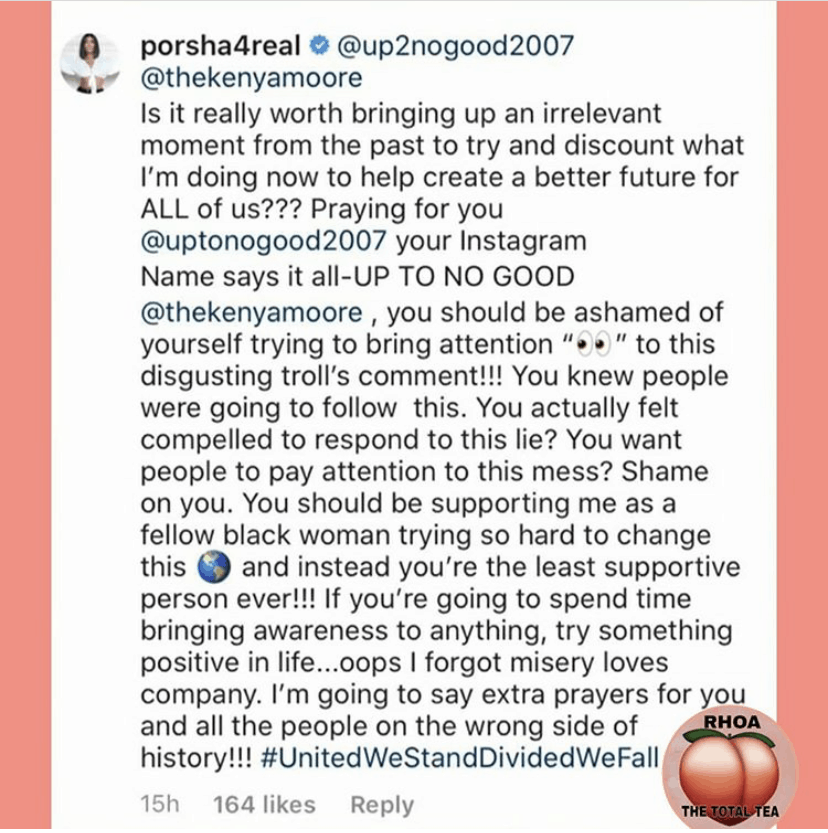 Kenya then wasted no time in firing back at her RHOA co-star, reacting to her comment with a retort of her own.

“Over [eyes] really? I support you and I ???? support the movement and will follow REAL leaders not storylines. So be REAL on and off camera. REAL change starts with YOU,” wrote Kenya.

The reality star went on to explain that the cast should be “apologetic” to Eva Marcille, who she said has been “a REAL activist,” bringing up Porsha’s past moment saying she’d “beat her a–.” Kenya also brought up that infamous moment from the season six reunion where Porsha literally dragged Kenya by the hair when their conflict got too heated. 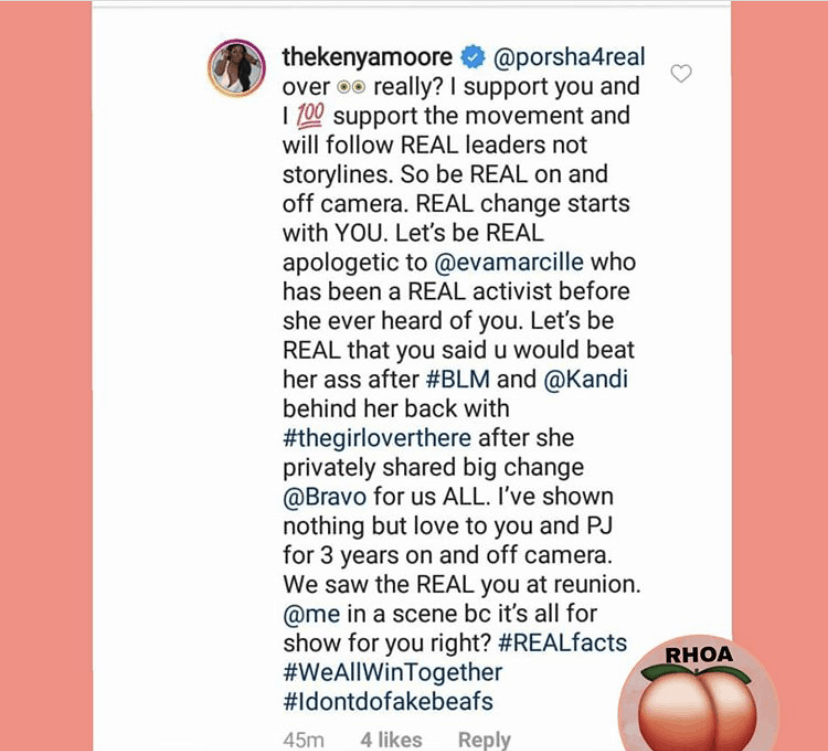 As if dealing with that IG feud wasn’t enough for Porsha, she also had to respond to a rumor going around that she allegedly “twerked” on a police officer at the protest at which she got arrested, according to an online rumor. Porsha clarified the details of the photo in her Instagram comment and also showed the video from which the image was screenshot for further clarification. And the video clearly shows Porsha bending down to pick up her water, seemingly unaware a cop was standing behind her.

“You all have really lost your mind ! If you can possibly believe I was dancing on a cop before being arrested for peacefully protesting for our beloved Breonna Taylor. I was actually picking up my water and had no idea he was behind me,” she clarified in her caption. “Whoever took this pic and sent to reddit with this headline you should be ashamed of yourself. Smh SAD… Anyway I guess I shouldn’t have addressed this but I’m human to [sic] and this is a cause close to my heart …I will not be discredited with foolishness. I stand for justice and I will continue to demand justice for #BreonnaTaylor #YouCantStopTheRevolution #SayHerName[.]”