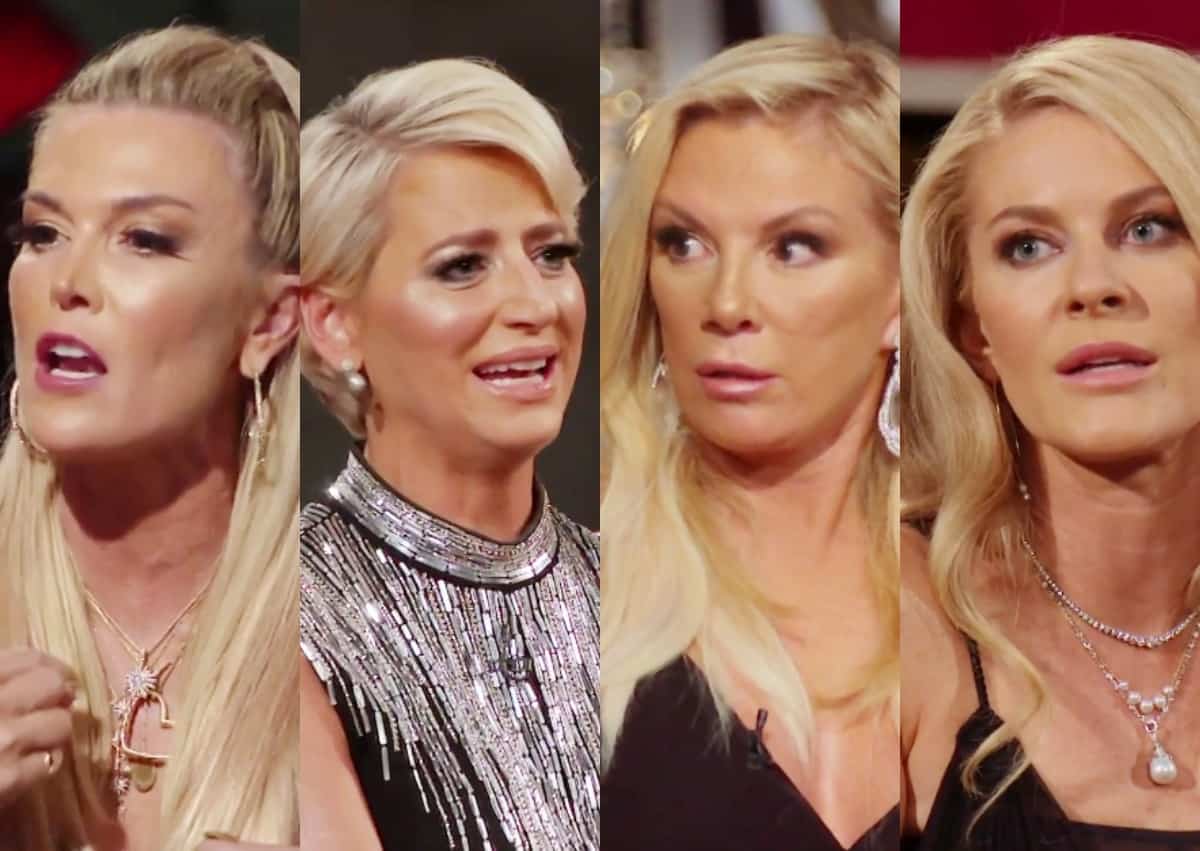 This week on the Real Housewives of New York City, we are back for part two of the reunion. Dorinda is still seething from the shame of John getting handouts from Scott. She apologizes to Tinsley for her abusive behavior this season but with zero sincerity.

We start off again with Miss-no-accountability Dorinda who doesn’t want to be a damsel in distress like she thinks Tinsley is. She claims Tinsley is codependent with no financial security. Dorinda doesn’t think Tinsley was transparent but the other ladies remind Dorinda that they had to find out about her split from John in the media. However, Dorinda claims her friend planted a story about HER breakup while she was still sorting out her feelings. She shares her friend did that to encourage her to move in the right direction with John. Hmm, that sounds pretty disingenuous to me that a friend planted a story about you in Page Six.

Dorinda seems to know a lot about what Tinsley was up to. Did she put a tracker chip on Strawberry and Shortcake? The viewers want to know why Tinsley’s other so-called friends on this show didn’t stand up to Dorinda. No one wanted to stand up to Dorinda; she is an aggressive bully. Who would want to engage with that? Why does Dorinda care that Tinsley lived in a hotel? Is she paying the bill? Tinsley refuses to accept the bullsh*t apology from Dorinda. Good for you, Tinsley, for standing up for yourself!

Leah feels like she is in the middle of Dorinda and Tinsley since she likes both of them. A viewer nails it with the comment that Richard gave Dorinda everything and that is exactly what Tinsley got with Scott. Production shows Dorinda’s crazy rant from the finale. It is such a bizarre rant but now knowing what had occurred with Scott and John it gives us all more clarity. Dorinda does have that gang up mentality.

Dorinda resents that it was implied that Tinsley brought Leah to the group. Andy clears that up — apparently Bethenny recommended Leah and deserves a finder’s fee. Who knew Bethenny gave 30 names to their casting director and was their talent scout? Leah didn’t even know Bethenny. Tinsley and Leah met before filming and hit it off. I guess Dorinda thinks if you don’t show how your bodily functions work on camera you aren’t being real enough for this show? Dorinda, honey, you are literally grasping right now. Andy admits that Tinsley did sit down and talk about moving to Chicago with him and production. They mutually agreed it was a good move for her and green-lighted it. Ramona decides at this moment to get up to pee with no mask on. I guess it is better than falling asleep while filming.

Luann gets called out on being pissed about sleeping in the lower level. In her book, she will always be the Countess. No one puts the Countess in the basement! Luann doesn’t see herself as being uppity and won’t admit she was behaving like she was still a Countess. I guess she has to hang on to that title as long as she can until it is literally pried out of her hands!

They discuss the Mexico trip. Ramona gets shamed over her treatment of the staff in Mexico. She called them servants. Ramona thinks she did that because she was antiquated and old? No, how about entitled and pompous? Luann thinks the camel riding was basically symbolic of getting her life back this season. She got back on that camel after being thrown off in the past.

Tinsley gets dismissed early to go back to Chicago and not to have to run into Dorinda in the parking lot. I am glad she got the chance to share her feelings and let us all know what the heck happened! I think we were all flabbergasted by all of the nasty crap Dorinda spewed this season. Tinsley, run off to your Prince! Enjoy your life in Chicago, and I hope all of your dreams come true like a true Disney Princess! When they were taking their break, Dorinda appeared to run across to where Tinsley was gathering her things, but I couldn’t hear if anything was said. I don’t know if she was getting in the last word with Tinsley or not.

Luann began the season by ending her probation. She did give back to the Fortune Society which was a good career move IMO. Luann spent her season planning her tour for Marry, F*ck, Kill and writing a book. We get to see the journey she went through and learn more about her upbringing.

Luann was at her best this season IMO. She was more humble and couldn’t have looked better. The other ladies think she is more real this season and she has found herself again. Luann came across as the voice of reason this season. The viewers did call her out on how she portrayed her journey through the court system. She wasn’t on parole and she wasn’t in prison. TRUTH.

We get into Sonja’s assertion that she didn’t get paid to work on Lu’s show. She is playing an imaginary violin when Luann is speaking. I think Sonja is getting paid fairly since she is basically just being her normal wacky self.

Luann gets emotional when Andy asks her about her relationship with her dad. They apparently had a strong bond and she is still grieving the loss of him. Luann shared she took him around the world and spoiled him since she is so proud of how he gave up booze for 10 years. It makes sense that Luann wants to feel she is in control. Luann is consumed with the Cabaret since it gave her a sense of control. I give her a lot of credit to give up drinking for two years to satisfy her probation officer and STILL have to hang out with this crew.

Ramona calls out Countess Luann for her actions of being all uppity in the past. Luann now admits she was hiding a bad marriage and that is why she wasn’t as real as she should have been. I can promise you, though, she won’t give up that Countess title nor stop saying Cabaret on repeat. It is just part of her identity at this point.

Production decides to venture into their flirtations this season. Leah couldn’t believe how horny these women were this season. They all talk about who is the biggest flirt. I think Luann has the most game. Sonja hits on everyone so there is nothing new there. Ramona gets asked about William — aka the guy with the jeans full of magic. She pretends she doesn’t know who William is. Ramona calls him Bill and just claims they are friends. Dorinda calls her out and claims Ramona has been getting it on with Bill and she would be knocked up by now if she still got her period. Ramona says they are just platonic friends with benefits.

Dorinda admits she does have someone kind of special in her life. She is taking it slow since they met before COVID. Andy asks who will be the next person in a monogamous relationship and they think Dorinda. She admits that is all she goes for. Gosh, do I hope this poor soul has watched her on TV to see her in action and how she can eviscerate people.

Leah gets questioned about the guys she met this season. She actually claims she isn’t a one-night stand kind of girl. Leah is surprisingly more traditional in her dating practices, who knew?

Ramona and Leah go at it about the birthday party and the dirty dancing. Leah thought Ramona was too full of herself telling the cameramen to shut it down. Ramona didn’t like the gum-chewing, sister plus one, stripper moves, etc. Dorinda may have nailed it that Leah has something that can’t be bought: youth.

Ramona can forgive Sonja anything, but Leah is crass in her opinion. I think we can all agree that Sonja has done far more provocative things than Leah. I swear we have seen Sonja without pants countless times. She is nothing like Lucille Ball. Ramona, Lucy kept her pants on. Leah calls Ramona out on her hypocrisy when it came to her. She was upset when Leah was talking about sex in front of Avery, but Ramona was simulating or*l sex with a glass there too.

Leah then gets into the bipolar comment from Ramona. She tells Ramona she wasn’t on medication. Leah resents that her daughter heard about the hospitalization and diagnosis on TV. Leah needs to recognize that she signed up for this show and there was an article written. Ramona refuses to acknowledge that she crossed a line making inflammatory statements. Dorinda calls out Ramona for a facelift and it is not just skin products. She tells Ramona that her 50 best friends think she is wretched and she is getting laid by random men every night. BOOM!

Ramona sees herself in Leah. Leah thinks Ramona was a maternal influence with her this season. So when Ramona rebuffed her it made her feel insecure.

YIKES, I think they were going for the jugular this season trying to keep their jobs, and Leah is trying to ask for some big bucks for the new season and getting shut down. Side note: Haven’t you all noticed this year on these RH shows that there have been multiple times when the fourth wall has come tumbling down?

Next week, we have part three of the reunion, and Dorinda gets called out by the other ladies, again! Leah declares that Dorinda doesn’t hit below the belt. Be well everyone and have a good weekend!