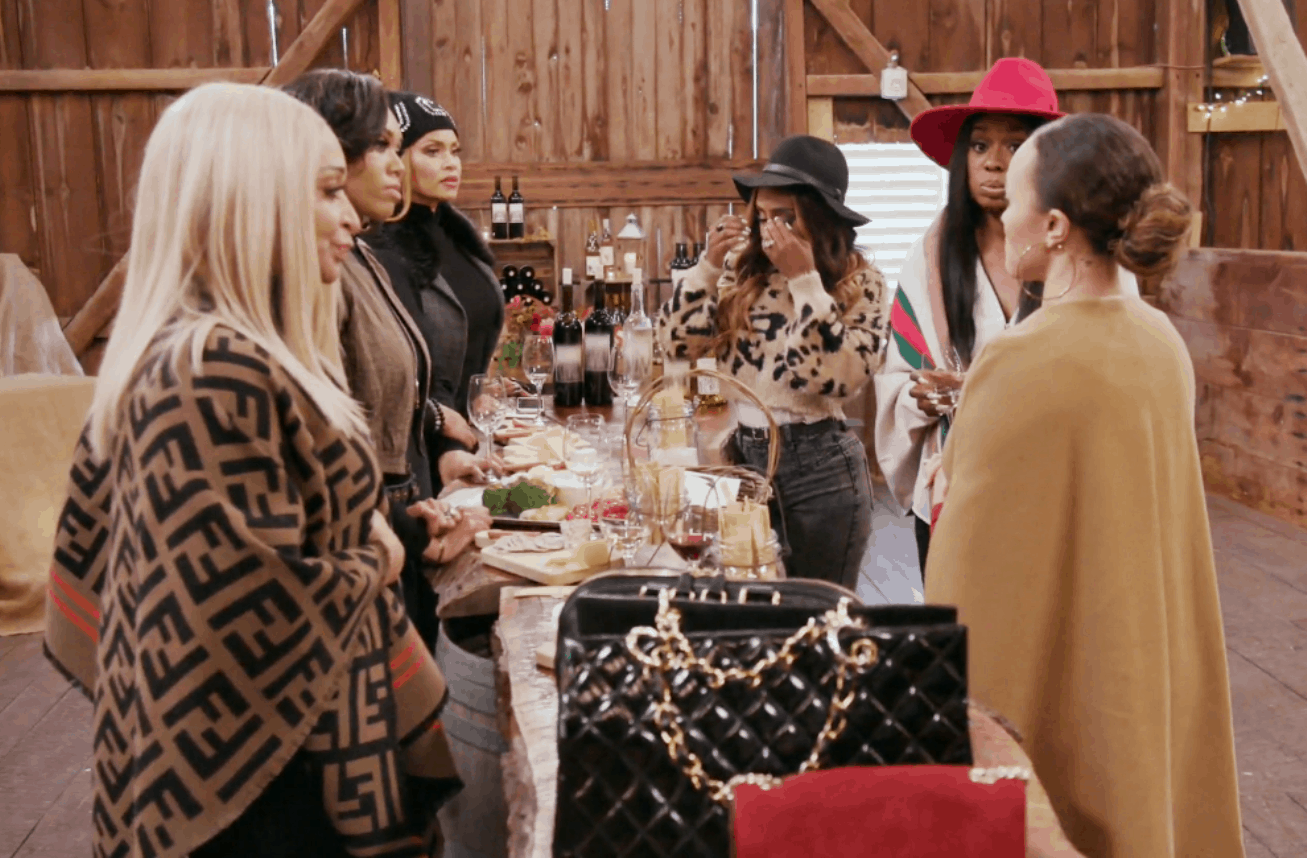 On this week’s episode of the Real Housewives of Potomac, we finally hear Michael’s version of the story. Candiace and Monique go nuclear at the winery over the affair rumors. Hold on, everyone, this is going to be an explosive episode.

Candiace is in the studio doing a remix of the love song she made for Chris. He likes this version better than the one she did for their wedding and he sent it around to promote it for her. It definitely sounded better than the original. Okay, she isn’t in the same musical stratosphere as Mariah Carey, but it is an improvement. Candiace shares with Chris that she is officially done with ‘Plastic Monique.’ She isn’t going to participate in the “Lazy Moms” podcast. Candiace wants to just focus on herself and not put any effort into a friendship with Monique. I thought that was what she has been doing all of her life? Sorry, I digress…

Michael and Ashley have dinner and it is unbelievably awkward. She had to be inundated with texts of Michael in his underwear that she RECOGNIZED…being that she has sniffed it on many occasions! Ashley wanted to have this conversation in a public setting since she didn’t want to fight around the baby. Michael claims to have no appetite. He claims he was going to share with her what transpired at the hotel but he knew she was with those women, and he wanted a chance to explain in person.

This is the story he is telling: Michael, his friends, and some strippers/girls from the club went to MGM. One of the girls asked HIM if he wanted to go to a hotel for a negotiated price. Michael claims he was too drunk to do anything with her and all he did was kiss her in the cab. She, however, snapped a photo of him in his underwear in the hotel room and sent it to a blog. Poor Michael was craving intimacy and he just needed a little release since you know HE just had a baby. Boo-hoo, Michael, show some respect for your wife.

Ashley talks of another woman that had been a part of their relationship in the past. She no longer wants an open relationship with Michael. Did he really just say the fun is now over? Doesn’t he realize he now has a newborn and relationships change when you are married and start a family? She can’t handle the embarrassment anymore and will end their marriage if this continues. It will be catastrophic for their relationship and she will not stay in this relationship just for Dean.

Michael then looks for a producer and says, “Can we just cut now?” The producer, James, walks over, and Michael basically just tells him, “Didn’t you get enough drama on tape?” I cannot believe how much we are seeing from behind-the-scenes and how producer-influenced these scenes are. James appreciates their honesty in showing this mortifying scene but he wants Michael basically to continue to suffer on tape while Ashley eats her salad. It is almost like the GOT “shame, shame, shame” scene again! Yikes, Bravo is making them earn their paycheck this season!

Monique has a meeting with her team for the “Not for Lazy Moms” website. She is just hoping to break even at this point since she isn’t making money yet. Monique is having a meeting with her accountant. She isn’t bringing Chris since he will probably be shocked to find out how her business is basically broke. Monique hopes the ladies and some hubbies will bring something interesting to her viewers. She isn’t totally sure Candiace will show since they have had words.

Gizelle is furniture shopping for her new home even though her kids might have to eat Cheetos on occasion. She thinks she has good style, hmm, not so sure about that. I am sure the Grande Dame Karen will have an opinion on that. Robyn arrives and they decide to sit down and kiki. She shares how Monique blew the Michael conversation out of proportion after Gizelle left. They discuss what happened with Michael and how they were bombarded with DMs with pictures. Robyn accidentally sent them to Ashley. Yeah right, Robyn, it was so very innocently sent by accident. Robyn covered for her producer-induced text by asking, “What do you want us to do?” Gizelle thinks it’s a good idea to bring this group together to a winery since no one acts like a fool when they are drunk on wine, right?

Wendy and Eddie take little Kruz to what he thinks is Power Rangers training. How cute is that? Wendy lets Eddie know that her maternity leave is over. She is unsure about keeping her teaching position. Wendy is concerned she will disappoint her parents if she doesn’t continue on her current career path. She has followed the path her parents planned for her and she isn’t sure that is what she wants anymore. That is a tough place to be in when your parents have sacrificed for you and you want to be appreciative but at what expense to your dreams? #Toughcall

Monique and Chris are taking a walk with baby Chase and are discussing the podcast. She is being honest about how low her ticket sales are. Monique admits to spending $200K on this venture, which is major coin. He questions where the money went and he thinks it might need to be shut down. Monique needs this creative outlet but Chris thinks since it isn’t profitable she should reconsider it. She tells Chris that Candiace bowed out and won’t attend. Chris is disappointed since he likes them both. Monique will now have to redo her ads for the podcast event. “Honeymoon phase is over” was the topic for them and they haven’t even gone on one yet. Maybe this wasn’t such a good idea in the first place?

Robyn visits her parents, Gladys and Guy. It is interesting when she shares their backgrounds. Gladys was a professor and Guy was a dentist and is now a jazz musician. They have seen Juan as a son since he lost his parents at 15. They aren’t impressed with her “Happily ever after” tattoo. Robyn tells them that they are moving toward buying a new home and will probably just get married. Gladys is happy but Guy isn’t too keen on it. Robyn thinks couples counseling will make it work this time. Her parents aren’t going to buy any wedding gifts anytime soon so don’t expect it. This is definitely not their first rodeo with Juan!

Ashley introduces us to her half-sister, Jessica (Sheila is her mom too), and they are shopping for a homecoming dress. Sheila is joining them to care for baby Dean. It is funny how Jessica is nixing all of their choices, which is so typical for a teen. Sheila is really angry at Michael and she hopes he knows there are consequences for his actions. Ashley tells her mom she will leave him if she has to. She has done it before and will do it again if necessary.

We are having our get together at the winery that Gizelle planned. WTH is she wearing? Bravo, please! Hire Gizelle a stylist! Gizelle wanted to plan this event to celebrate her literary award. Monique finds it ironic that Gizelle is receiving accolades on her book about her cheating husband that she NOW has reconciled with. Will there be a sequel to My Word called What Was I Thinking? Ashley arrives and now the whole gang is here. Gizelle congratulates herself for her literary award and the others just pretend to be enthused.

Ashley shares that she might be pregnant since she feels a little off-centered. She is honest with the other ladies about what transpired with Michael. I am actually glad she is sharing that this is something that they are both on the same page about. They are not buying that she isn’t affected by this and they are confident there must be a s*x tape.

Ashley appreciates them being supportive since she has said and done some shady stuff to them. Yep, you sure threw some nasty shade in the past. She appreciates them rallying for her when she needs it. Ashley then wants to know if Monique and Candiace are good? OH DEAR LORD, here we go.

Candiace says she loves Monique even when she pretends to be sleeping. Monique tells her you can’t possibly understand how tiring it is to be a mom and host a get-together. Kid shaming? It gets heated between Candiace and Monique at the winery but the conversation is a bunch of cross-talking but not really to each other. This all goes back to the conversation with Charisse.

Monique and Candiace are now coming for each other’s neck. The people in the winery are looking at them in horror and then it goes really wrong. Monique is calling Candiace a leopard and a Chia pet. Candiace is doing a lot of hand waving in Monique’s face and then Monique goes for Candiace’s hair! It is never a good thing when you go for the hair!

Monique screeches, “Do you want to drag me?” We then hear and see broken glass and screaming for Monique to stop. We have another to-be-continued to see what went so terribly wrong with these two alleged friends. Side note: I need a glass of wine after listening and witnessing that mess of a scene!

Next week, we will see the aftermath of that disaster at the winery. Be safe this week and have a good one!