RHOP Recap: Blood is Drawn During Monique and Candiace’s Fight, Plus Gizelle’s Dad is Caught Sharing His True Feelings About Jamal 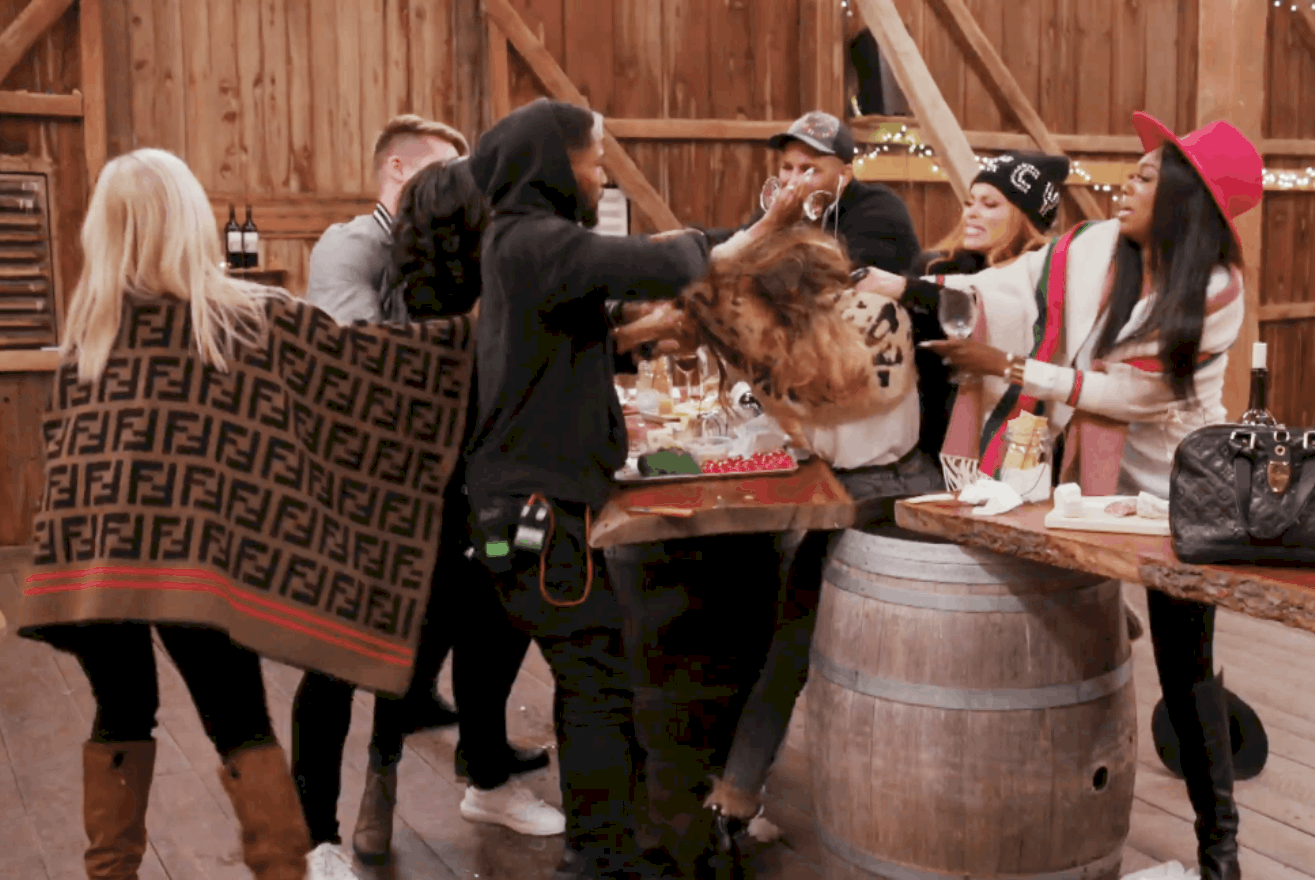 On this week’s episode of the Real Housewives of Potomac, we are facing the aftermath of the fight between Candiace and Monique. Will their friendship be damaged beyond repair after this? Let’s get to the bottom of this messiness.

OMG, it is AWFUL to see this altercation play out and how bad it got. You should never dare someone to drag you unless you are prepared for the consequences. Monique literally wouldn’t let go of Candiace’s hair and basically dragged her across the table. It took production and the other ladies to separate them. The producers literally have to lock Monique in a stairwell to separate them. Ashley comes out of the bathroom with her mouth agape and is probably thinking now they will forget about her husband’s drama. Monique, while talking to Karen through the door, hears Candiace STILL calling her a ghetto a*s b*tch, and James the producer has to hold her back again.

Monique escapes out of the building and tries to chase Candiace down AGAIN. The producers have to basically almost tackle her before she starts chasing the car. They thankfully have already whisked Candiace out of the building into a car. Thank God, or this fight would have continued into the parking lot. Monique has wine on her face and blood on her lip and she is still seeing red. I have to say this is probably one of the most violent scenes I can recall on a housewives show. It was disturbing how out of control and violent it became.

The consensus of the group is that Monique instigated this. They are all horrified that they behaved this way toward each other and let it get violent. Karen, IMO, was probably the voice of reason in this situation trying to calm them both down to no avail. She also thinks that Gizelle has stirred this angry pot and helped it to boil over as well. Wendy is like “I didn’t sign up for this crazy sh*t.” I am sure CNN and Johns Hopkins won’t be happy she is associated with a show that has this image.

Candiace calls Chris in the car to let him know what happened. She tells him Monique attacked her and all she was doing was talking sh*t. Candiace, you are not innocent in this. You can’t keep putting your finger in someone’s cage and not expect them to bite back at some point. Monique was wrong to take it to that level but it takes two for it to combust the way it did. Candiace tells Chris, “Monique behaved like a ghetto a*s hoodrat.” That is exactly something that NO ONE wants to be called and is obviously said to provoke.

Monique calls her Chris to let him know what happened. She tells Chris she was grabbing her weave and bashing her face with her fist. Chris is embarrassed for her and that it got to this point. I find it ironic how Chris earns his income as a football player, which is a violent sport. There are athletes that have been known to act this way off the field but it is Monique who is involved in a physical altercation on a TV show! Monique lost control and according to her, “The hood came out.” It sure did and you need to put it right back in the hood. It is not a good look for you, Monique.

The next morning, the ladies are all dealing with the aftermath. Robyn can’t take Monique’s side during this — even though Candiace can be annoying to react so violently is indefensible. Wendy is troubled that the women behaved this way and proclaim this is why they don’t get a seat at the table. This is not the type of legacy she wants for her daughter. Wendy wants to be a good role model to her children and this is a teachable moment.

Candiace and Chris discuss what happened the night before. She complains that her forehead hurts but she doesn’t think she was concussed. Chris can’t fathom how it led to such a violent altercation between these two. Has he met his wife? Chris thinks since Candiace apologized for the Charisse situation there shouldn’t still be animosity between the two. Candiace won’t even consider any further communication with Monique after this. I agree these two need to go back to their corners and take a breather.

Karen and Ray are having relationship struggles. It is Ray’s birthday and he feels neglected and frankly just wants Karen back in the kitchen. Karen suggests a life coach to help them through this rough patch. She tells Ray about the previous night and how they were both at fault. Karen won’t choose sides since they were both complicit. AGREED.

Karen and Ray then discuss Michael and Ashley and their relationship drama. He questions Michael’s sexuality and he isn’t surprised when Michael alleges he couldn’t have sex with that woman. Ray, you can be shady! A chef comes over to help Karen make Ray a birthday dinner since we all know a way into a man’s heart is through his stomach! Bon appetit, it looks delicious.

Gizelle, Grace, Angel, and Adore are headed to Atlanta to do a relaunching of their new restaurant, Arizona. Okay, this is weird — they have to stay at a hotel because it has room service and Jamal doesn’t have food in his house. Hmm, okay, that is just plain strange. You are reconciling and he doesn’t even invite you to his house and maybe stock the fridge for his kids? There is so much more to this story.

Monique and Chris are talking about what happened. He is very disappointed in her and thinks ladies shouldn’t be fighting like this. Chris thinks this is a bad image for women. Even T’Challa is speechless so you know even he doesn’t approve. Monique thinks it happened since Candiace is batsh*t crazy and feels justified in her actions. I know Candiace can be like an annoying little gnat, but taking it to that level was really excessive.

Gizelle and her girls meet Pops for breakfast since he lives in Atlanta. She invites him to the ribbon cutting for the girls’ new restaurant. They discuss Jamal and he is clearly not a fan of his. Pops clearly looks like he just got indigestion hearing they are getting back together. He didn’t even go to their wedding since he didn’t approve of their relationship. Pops just wants his daughter and granddaughters to be happy. Pops will even walk her down the aisle this time. I am not so sure about that one, which we will see later in the episode.

Ashley and Michael are having a discussion about his little, ahem, indiscretion. She is relieved that the narrative has changed in their group from Michael’s infidelity to the brawl between Monique and Candiace. Ashley asks Michael what has changed in their relationship. He thinks the level of intimacy has changed since the baby came. I just can’t with his selfishness — just move on, Ashley, already.

Ashley suggests that they get a postnuptial agreement. She thinks it is necessary to protect her and Dean if Michael continues to disrespect their marriage. I am sorry but this conversation doesn’t feel like a heart to heart. I liken it to a business transaction. Ashley is obviously preparing herself for a divorce and what she will receive in a divorce settlement. She is prepared to leave Michael in the dust especially if she has cash in her vault to live on.

Jamal has Gizelle and their daughters at least the ones with Gizelle visit the restaurant for the walkthrough. A producer tries to question Gizelle in her ITM about how many kids Jamal has. She refuses to answer the question on children that she didn’t give birth to. That is pretty telling if you ask me. Maybe she probably can’t give an accurate headcount?

Karen and Ray are meeting with Angela, the “Pillow Talk” radio show host. Angela asks some pertinent questions about their sex life. The issues they have are very typical of most couples. Snoring and being too busy for each other are the two they mentioned. Ray wants some attention and more homecooked meals. It is pretty sad that Karen says she is still in love with Ray but he is unsure NOW. Ray says he feels like with time his feelings have changed and he isn’t as in love with her as he was in the past. He thinks she is the one who has changed. Karen is very hurt with his announcement and leaves the room in tears. That was heartbreaking to see this play out.

We are at the restaurant relaunch. Jamal, Gizelle, and the girls thank the community for supporting their restaurant. The girls will be learning various jobs in the restaurant, which is a good lesson for them. Honestly, I don’t know how this is going to work when this restaurant is in Atlanta. Can you say a manufactured storyline?

Gizelle thinks since Pops is in attendance with Jamal that he is really okay with this. Pops gets up from the table to allegedly go to the restroom. You hear him talking to the producer and basically saying he can’t fake this with Jamal and his six to seven baby mamas. I told you I don’t think he will walk her down that aisle and deliver her to this player. Now, that is some reality there! Phew, there was a lot going on in this episode and a lot of it was pretty troubling…

Next week, the ladies are trying to work through the issues regarding the fight. It looks like Monique feels she is being voted off the housewives island and there doesn’t appear to be any resolution any time soon. Have a good week, everyone!