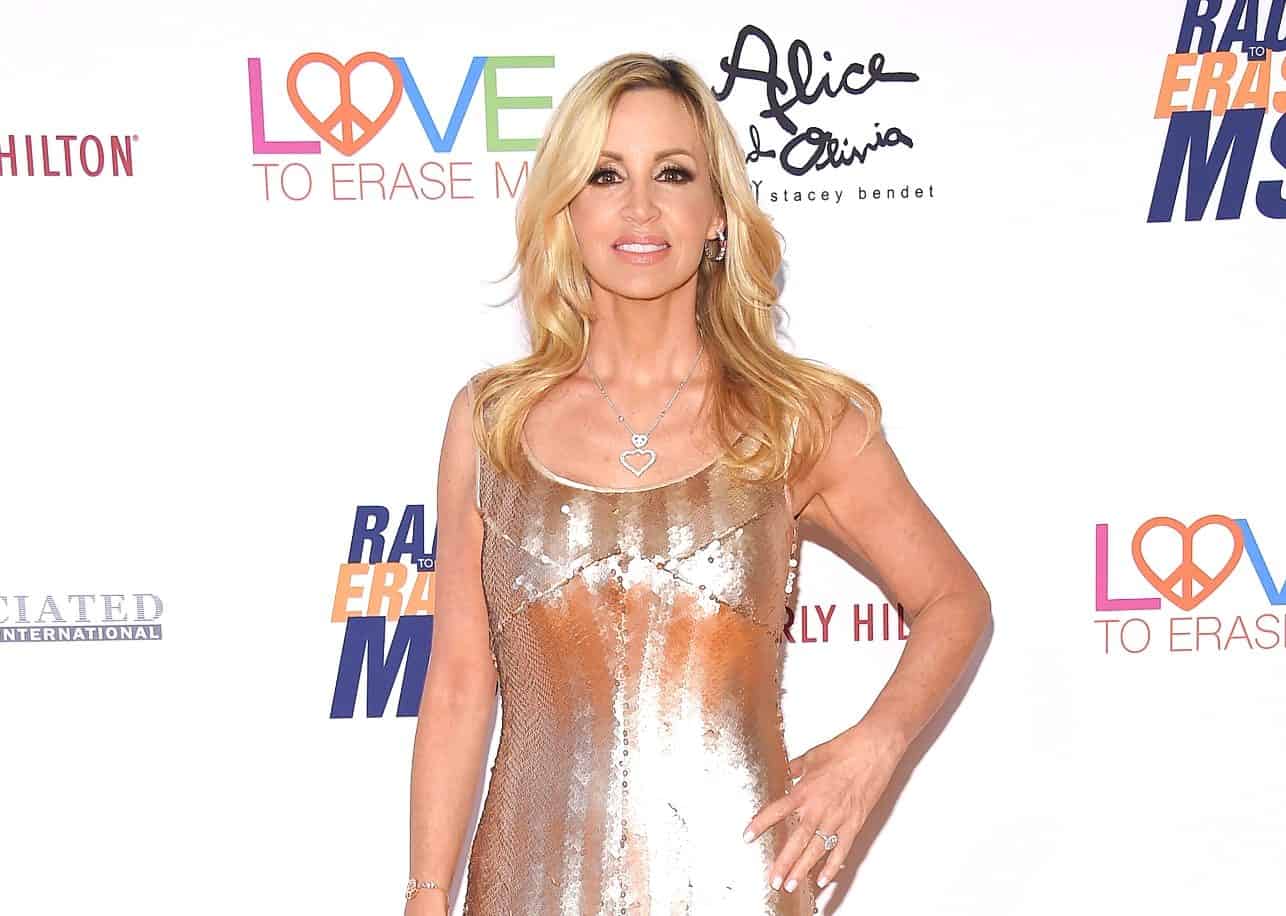 Camille Grammer took aim at Bravo and Andy Cohen in a series of posts shared to her Twitter page last week.

After confirming she will not appear on the upcoming 11th season of The Real Housewives of Beverly Hills, Camille slammed the network for playing favorites before accusing Andy Cohen of failing to be fair and revealing she was the only cast member who attempted to protect the children of Taylor Armstrong‘s late ex-husband, Russell Armstrong, after his suicide.

“Why does [Kyle Richards] always get good editing? She’s the worst! Bravo plays [favorites and] you can tell. Why is [Lisa Rinna] still on the show? She’s an old hag bully with no life of her own. Quite sure she’s really a man too,” a fan wrote in a message to Camille. 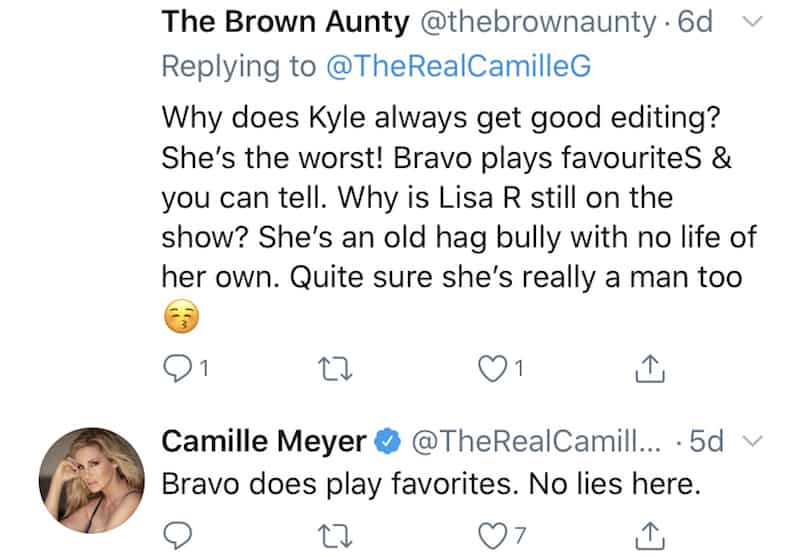 Another fan wanted to know if Camille would ever return to RHOBH for a special with the rest of the original cast of the series.

“We need an OG cast sit down to reflect on the past decade of tears, tiaras and tantrums as well as the fun, laughter and good memories. A where are they now? OG reunion setting with the original cast,” the fan wrote.

But Camille wasn’t quick to jump aboard with the idea and instead suggested she would not want to participate in any such thing unless Andy agreed to be fair with the footage.

“I believe people would watch it but Andy needs to be fair to all of that was to happen,” she explained.

RELATED:  Kyle Richards Suggests Garcelle Beauvais "Clearly" Targeted Her for a Storyline on RHOBH and Reacts to a Potential Producer-Driven "Take Down" by the Newbie 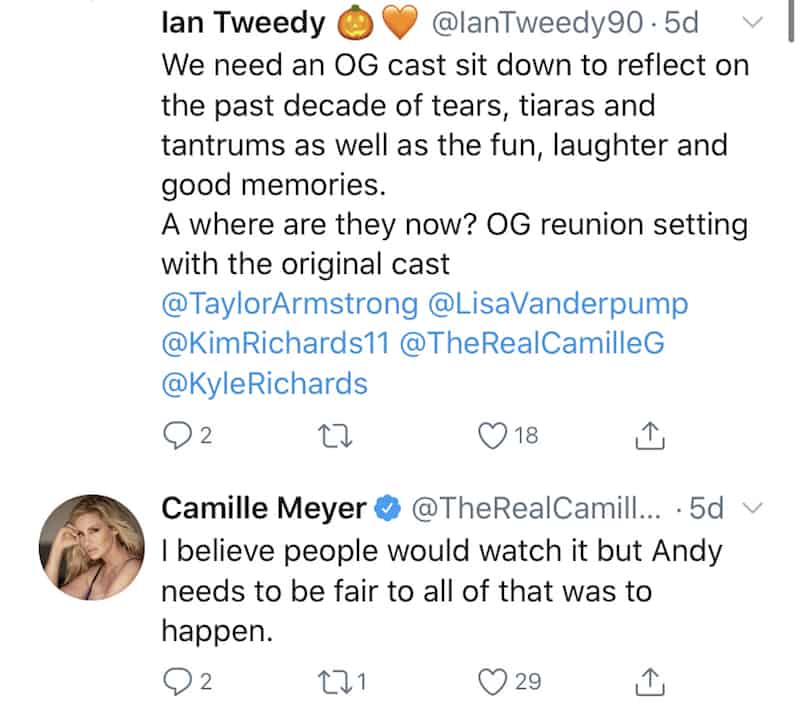 Camille then responded to a third fan who pointed out that she was the only RHOBH cast member who didn’t want Bravo to air the second season of the series due to Russell’s suicide and the way it could potentially impact his kids, including Taylor’s daughter Kennedy.

“Camille was trying to figure out the truth of the things Taylor told the entire cast off-camera about Russell. She was the only one who didn’t want [season two] to air because of Russell’s suicide. She was demoted in [season three]. Coincidence? I don’t think so,” the fan tweeted.

“True. How do you know this? I told the producers that show shouldn’t air because of how it may affect his children,” Camille revealed. “I believe I was the only [housewife] that felt this way and expressed it.” 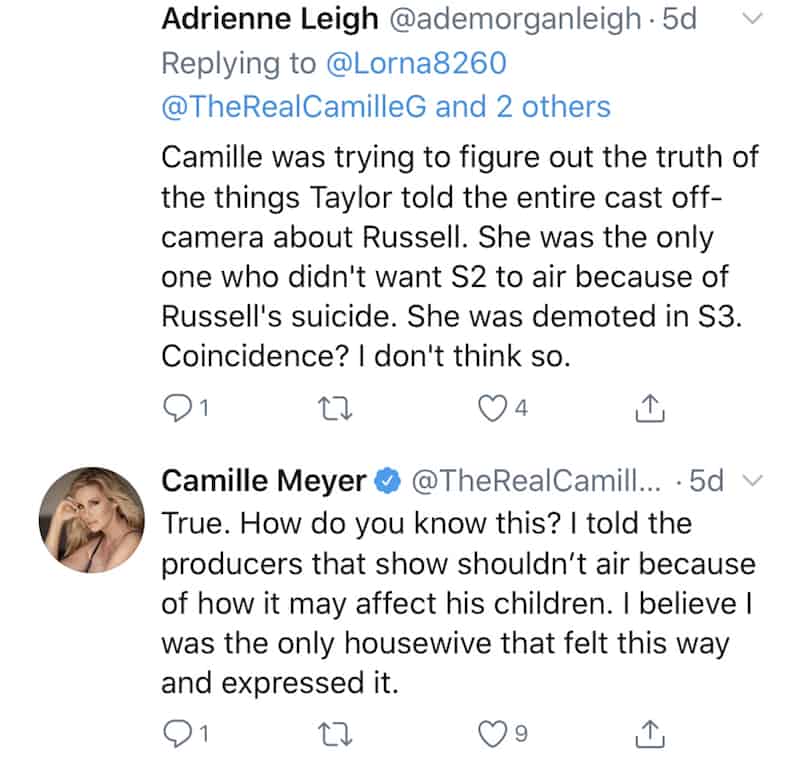