Home Real Housewives of Atlanta News RHOA’s Nene Leakes Laughs at Claudia Jordan’s Domestic Violence History After Claudia Slams Her as “Talentless” and Suggests She Cheated on Gregg, Plus Nene On Why She Didn’t Go to Cynthia’s Wedding and Addresses Claims She Demanded $125K to Attend

RHOA’s Nene Leakes Laughs at Claudia Jordan’s Domestic Violence History After Claudia Slams Her as “Talentless” and Suggests She Cheated on Gregg, Plus Nene On Why She Didn’t Go to Cynthia’s Wedding and Addresses Claims She Demanded $125K to Attend 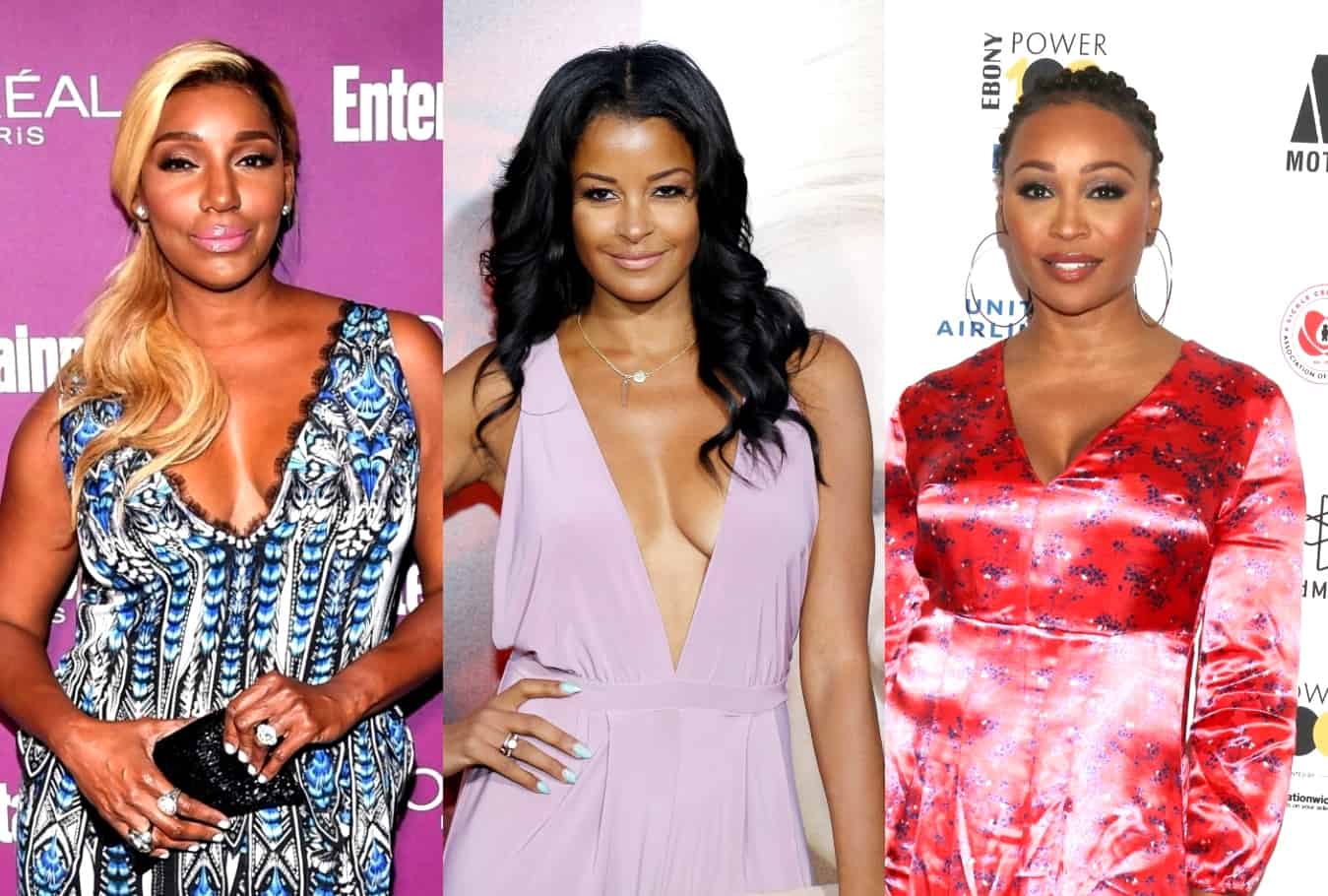 Nene Leakes recently opened up about her absence at Cynthia Bailey and Mike Hill‘s October 10 wedding, which then led to a very nasty feud with Claudia Jordan.

While shooting a preview for her digital series, The Read Session, the former Real Housewives of Atlanta cast member explained why she turned down Cynthia’s invitation and addressed reports claiming she demanded $125,000 to attend before sparking an ugly Instagram feud with former co-star Claudia by laughing at her ex’s alleged assault.

“I just didn’t think going to her wedding was going to benefit me,” Nene explained of her decision to not attend.

Although Nene didn’t see a point in attending her friend’s nuptials, she told her friends in the sneak peek that she wishes Cynthia and Mike “nothing but happiness” and confirmed she is supportive of their marriage.

She then reacted to rumors regarding her failure to attend.

After The Jasmine Brand shared Nene’s statements with fans on their Instagram page, Claudia weighed in on the former RHOA star‘s comments.

“It didn’t benefit any of the guests to come- if we didn’t care about Cynthia and Mike. But when you care about someone it ‘benefits you’ plenty to see them happy and smile and you ‘get’ something outta that,” Claudia wrote in a comment. “I love seeing people happy. Even people I don’t rock with anymore.”

She then suggested Nene was trying too hard to look as if she didn’t care about the remaining members of RHOA.

“Let’s not be so busy trying to show how unbothered we are that we make a fool outta ourselves. Bad answer. Just say you couldn’t make it or felt [uncomfortable] going. Too many people making this wedding about THEM,” she said.

In a second Instagram post shared by The Jasmine Brand, Nene was seen leaving a comment of her own on the post after seeing that an Instagram user had poked fun of the way in which Claudia’s ex reportedly “whipped [her] ass.”

Following Nene’s comment, which included several laughing-while-crying emoji, Claudia, who has previously accused an ex-boyfriend of physically abusing her, lashed out. 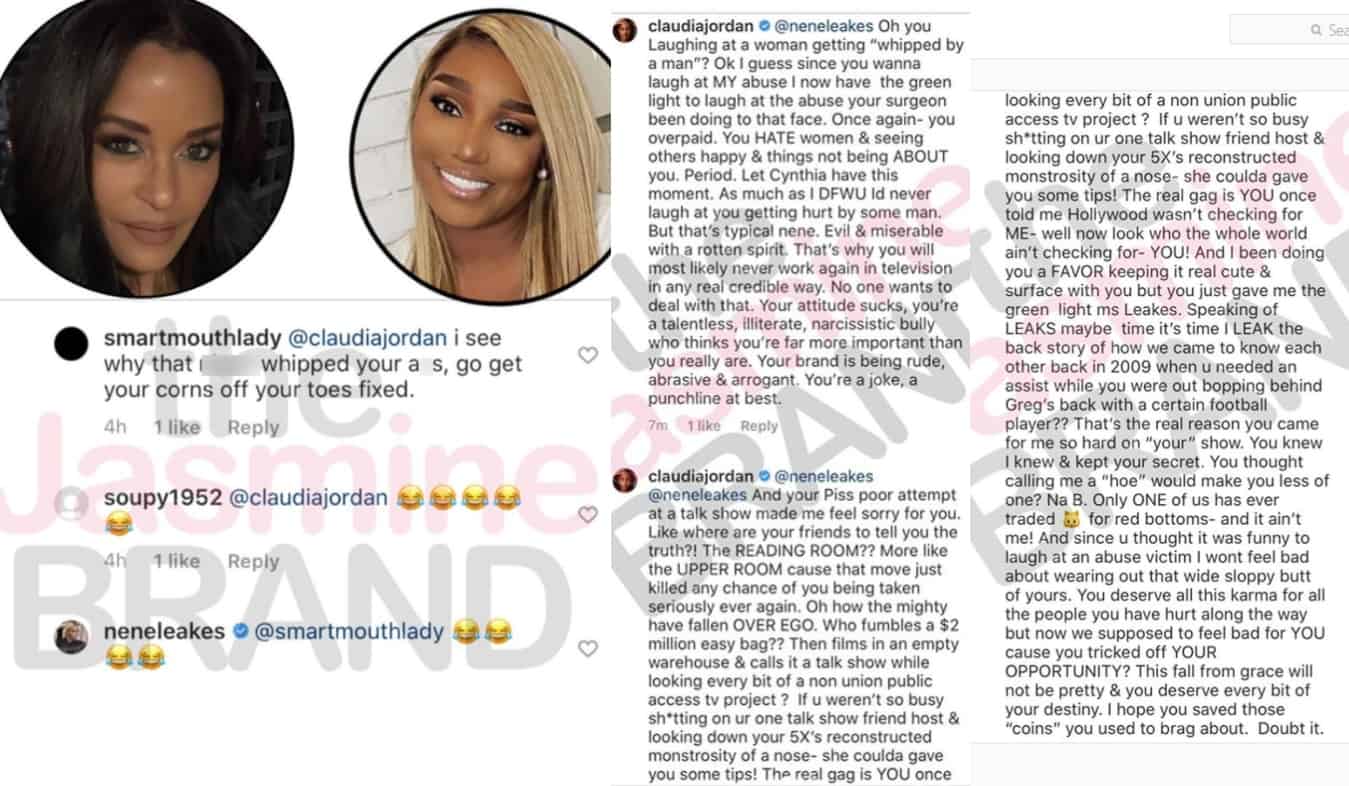 “Oh you laughing at a woman getting ‘whipped by a man’? Ok I guess since you wanna laugh at MY abuse I now have the green light to laugh at the abuse your surgeon been doing to that face. Once again- you overpaid,” she began.

According to Claudia, she believes Nene hates women and can’t stand when things aren’t about her.

“Let Cynthia have this moment. As much as I [don’t f*ck with you], I’d never laugh at you getting hurt by some man. But that’s typical Nene,” she continued. “Evil [and] miserable with a rotten spirit. That’s why you will most likely never work again in television in any real credible way. No one wants to deal with that. Your attitude sucks, you’re a talentless, illiterate, narcissistic bully who thinks you’re far more important than you really are. Your brand is being rude, abrasive, [and] arrogant. You’re a joke, a punchline at best.”

Claudia also suggested on Instagram that she and Nene met in 2009, during a time when Nene was allegedly cheating on her husband, Gregg Leakes.

“Maybe it’s time I LEAK the backstory of how we came to know each other back in 2009 when [you] needed an assist while you were out bopping behind Gregg’s back with a certain football player?? That’s the real reason you came for me so hard on ‘your’ show. You knew I knew [and] kept your secret. You thought calling me a ‘hoe’ would make you less of one? Na B. Only ONE of us has ever traded [p***y] for red bottoms- and it ain’t me!” she stated.