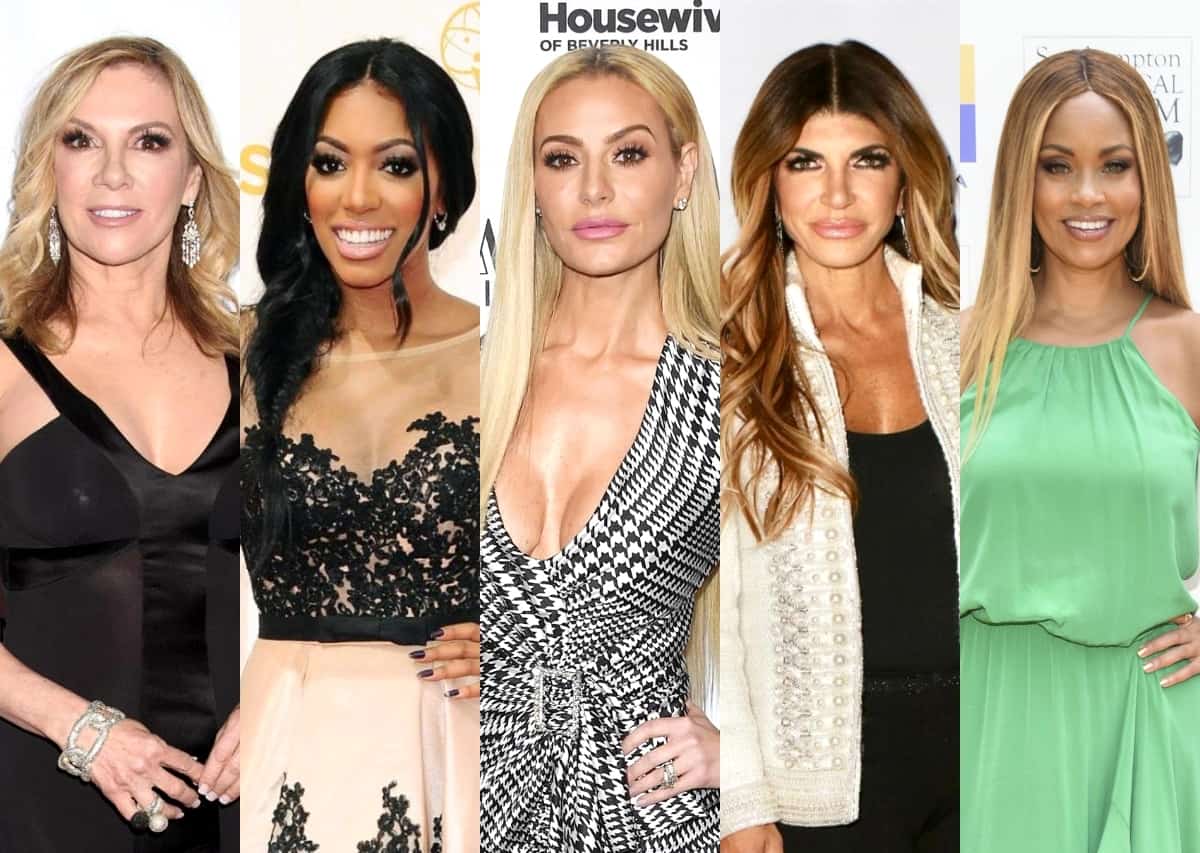 COVID-19 may have rocked everyone’s plans for celebrating Halloween this year, but that didn’t stop many of the Real Housewives from putting together some creative, fun, and totally unique costumes.

We’ve rounded up the real housewives who celebrated the holiday this year, detailing the awesome looks they shared to their Instagram pages.

Tell us your favorite costumes in the comments below!

The Real Housewives of Beverly Hills

The Force was with the Kemsley family this year as Dorit Kemsley, her husband Paul “PK” Kemsley, and their children Jagger, 6, were dressed up as Star Wars characters while Phoenix, 4, wore a “princess unicorn” costume.

New RHOBH cast member Crystal Kung Minkoff shared a sweet Instagram photo of her and her family for the occasion. She wore a skeleton costume while her husband, film director Rob Minkoff, wore a Jedi outfit, and her daughter, Zoe, 5, was dressed seemingly in a princess costume.

“Halloween 2020 out ✌️@robminkoff 🎃👻🍬,” the newfound reality star wrote in her caption.

The Real Housewives of Atlanta

Cynthia Bailey dressed up as hand sanitizer this year, perhaps making a nod to some of the flack she received for her recent 250-guest wedding amid the coronavirus pandemic.

“‘my hands are clean!’ 📸: @captainchan__#happyhalloween #covered #goodcleanfun #sexysanitizer,” the newly married housewife wrote in her caption.

“Macaroni in a pot” 🎶🐆🐆,” the reality star wrote in her caption, referencing the song and also tagging the rapper.

Kandi Burruss also made the holiday a family affair, and she, her husband Todd Tucker, and their children, Ace, 4, and Blaze, 11 months, dressing up in Masked Singer costumes, referencing Kandi’s time as the Night Angel on season three of the show.

Ramona Singer seemed to celebrate the weekend in a cozier, more laid-back manner, but she still got a little crazy with some Halloween hair, sporting colorful feathers in a long ponytail.

Luann de Lesseps got out the vote ahead of the 2020 general election in a truly unique way. She wore a suffragette costume to honor those who pushed forth the 19th amendment in 1920, making it possible for women to vote.

Leah McSweeney seemingly dressed up as Carrie, the character from the supernatural horror film of the same name.

“MOOD,” Leah simply captioned the photo of her smirking with a silver crown and fake blood dripping down her neck and on her dress.

The Real Housewives of Potomac

Ashley Darby, along with her husband Michael Darby and baby Dean, made a sweet reference to Michael’s Australian background as Michael dressed up as Crocodile Dundee, Ashley wore a kangaroo costume, and Dean sported a koala onesie.

“Bringing a taste of the Outback to the States. Happy Halloween! 🎃 🐨🇦🇺 #RHOP #DeanMichaelDarby,” Ashley wrote in her caption.

Gizelle Bryant also celebrated the holiday in two different ways, posting videos of herself as Cleopatra and as a black cat last week. 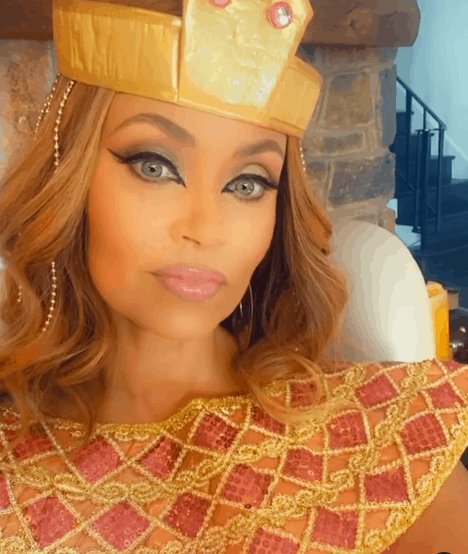 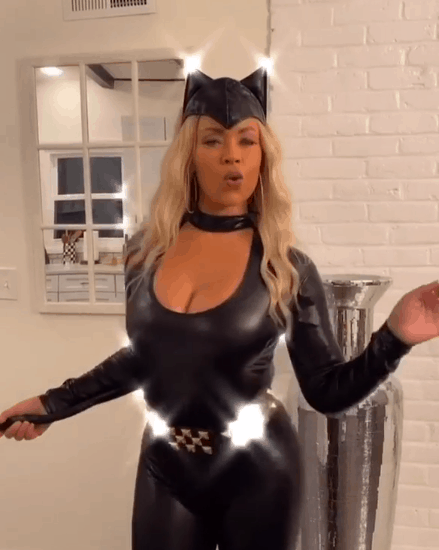 The Real Housewives of Dallas

Kameron Westcott and family were zombified for Halloween as Kameron and her daughter Hilton, 9, were dressed as zombie cheerleaders while her son Cruise, 6, went as a zombie in a pug costume.

“Halloween 2020!! I surprised Hilton and matched her zombie cheerleader costume, she was so excited!! Cruise also is a zombie under the pug costume 🤣🐶 One scary family this year!!” exclaimed the reality star. “Hope everyone had a super fun Halloween! 🎃💕[.]”

Stephanie Hollman also shared a sweet shot of her family decked out for the holiday. She dressed up as Little Red Riding Hood, her sons Chance, 9, and Cruz, 7, wore Fortnite brothers costumes, and her husband Travis posed as Ace Ventura, Pet Detective.

The Real Housewives of New Jersey

Teresa Giudice got sugary sweet for her costume, wearing cotton candy colors and covering herself in sparkles.

“I’m the sweetest BITCH you’ll ever meet😉tis the season … Are you a trick or a treat?!🎃” Teresa captioned her post, making a sly reference to Jersey Shore‘s Sammy “Sweetheart” Giancola‘s tagline from the show. “Glam by my girl @priscilladistasio 🧡#rhonj #season11 #happyhalloween[.]”

Melissa Gorga and husband Joe Gorga stunned in some nautical-themed costumes, with Melissa as a mermaid and Joe coming after her as a mermaid catcher.

“He caught the mermaid 🧜‍♀️ #mermaidcatcher #rhonj @joeygorga,” she captioned the post.

Dolores Catania made a hilarious nod to the recent plastic surgery work she had done this year, and she was decked out in bandages and fake blood.

“‘it hurts to be beautiful’ 🔪 Hilda Demarco (my nana),” she wrote in the post. “Thank you to the queen of Halloween @nikkiexotika and @chriscianciartistry for preforming [sic] one of my best surgery yet, my amazing look you guys rock! 🎃Don’t worry @drkarolak and @drjosephmichaels it’s just a costume 👻 #RHONJ #Botched[.]”

“I got you babe 🧡🖤🎃,” Jackie captioned the post, referencing the hit song by the duo.

“Jennifer and her Prince😊,” the reality star wrote.

Margaret Josephs and her husband Joe Benigno got a little spookier for the occasion, channeling Addams Family characters Morticia and Gomez Addams.

Margaret also shared a shot of all the RHONJ ladies together as they were shooting for season 11 of the show.

The Real Housewives of Orange County

Shannon Beador celebrated the weekend by remembering her rock n’ roll past as she and her boyfriend John Janssen dressed up in similar “rocker” looks.

“About last night ❤️ Was serenaded by the birthday boy🎤🎶💕🎉 #lovethelonghair #myrocker #karaokeking😜,” she wrote in her post.

Kelly Dodd and her husband Rick Leventhal celebrated the holiday with a group of friends, and they channeled the hit Netflix show Tiger King with Kelly in a tiger costume and Rick dressed as the show’s main character, Joe Exotic.

“My pre party !!!” Kelly exclaimed in her caption, sharing more photos with other friends from the party.

Gina Kirschenheiter and her kids, Nicholas, 7, Sienna, 5, and Luca, 4, celebrated with her boyfriend Travis Mullen and their children, with Gina dressed as a spooky scarecrow and their kids in similarly creepy costumes.

“Happy Halloween party people!!! This Brady Bunch had so much fun celebrating last night with our neighbors and friends,” Gina wrote. “Feeling especially lucky to live where I do!! ❤️❤️ @travis.mullen.85 every party needs a pooper babe! ❤️ #halloween #nailedit[.]” 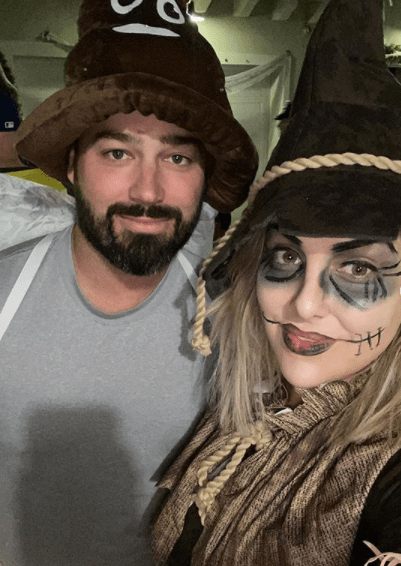 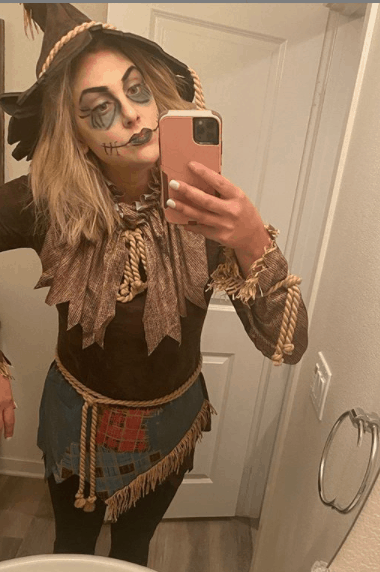 Elizabeth Vargas went nautical for the holiday in two separate sailor costumes, shouting out the U.S. Navy for their service.

“Love me a good sailor outfit! ⚓️💙Thank you to all that really do serve our country & for letting us utilize the Navy uniforms for entertainment purposes one day a year⚓️⚓️⚓️,” she wrote. “#navy @usnavy #proud #thankyouforyourservice #lovethecostumes @halloweenbootique #happyhalloween #staysafe #stayhealthy ⚓️⚓️⚓️#rhoc🍊[.]”

Braunwyn Windham-Burke and her husband Sean Burke made a truly adorable and creative move for the holiday as the couple and their large family went as Snow White and the Seven Dwarfs.

A few other women from the brand new franchise also dressed up for the holiday for a “Happy Hour” special with Bravo.

Whitney Rose got dolled up as a lioness for the event.

“I loved my first @bravotv Happy Hour with an amazing crew!” Whitney exclaimed. “Thank you @carpedaryn ✨@paigecamrynmua nailed the makeup 🦁[.]”

“The ice queen reigns supreme, especially on Halloween 💎 Thank you to @BravoTV for including me in such an icy Halloween Happy Hour the other day! ❄️ These polaroids are beyond & forever obsessed with all things @christiancowan 💖,” the new housewife wrote in her caption. “Hope everyone stayed safe this weekend. Your health is more important than any Halloween party! Dress up, stay home, and watch some Halloween movies (and the #RHOSLC trailers 😘😉)[.]”

Mary Cosby also shared a video of herself for the happy hour wearing what appeared to be a princess costume.

“Thank you To All Joined Us On The New #happyhourbybravo #special Thanks To Our Host @carpedaryn and To The Entire Cast panel! I loved the 💕guys 😂 Thank you to #fans that joined!” Mary gushed. “We are Thankful For your #support #we#love you All❤️#thankyou #bravo #rhoslc #rhoslc❄️[.]”