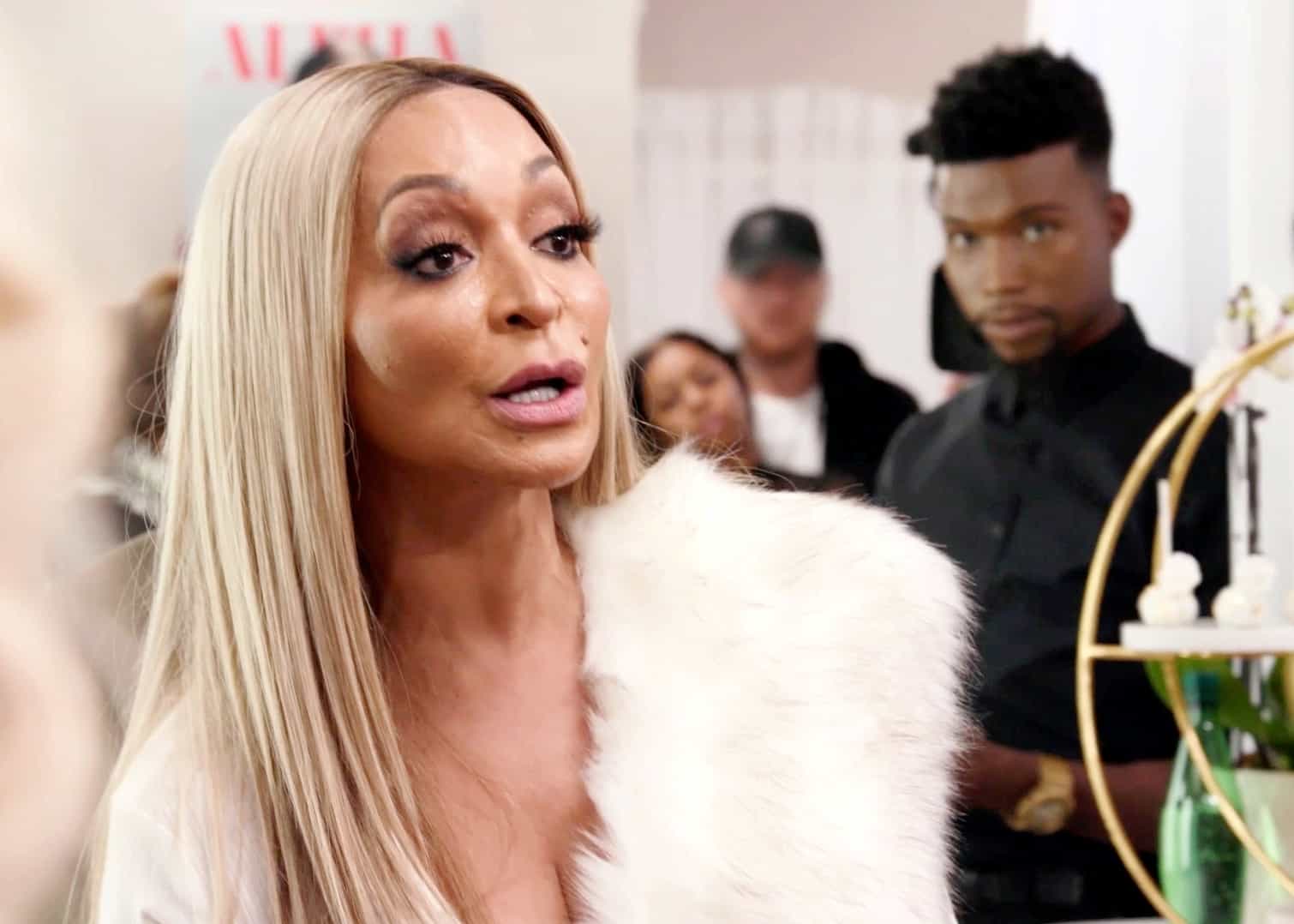 On this week’s episode of the Real Housewives of Potomac, the ladies are back from Portugal. From the previews, we are led to believe that there will be a confrontation this episode, but things aren’t always as they seem in Potomac!

Karen gets her wigs from her line delivered by her “Wig Doctor” Steven. She is proud of her new collection and is confident it will be a hit. Production shows a montage of before and after pictures to illustrate that since he has been designing her wigs she has never looked better. AGREED. The “tug wig” for Ray will be a good look for Karen. Who knew Mr. Huger was a hair puller?

Ashley meets up with Monique for lunch. She brings a birthday gift for baby Chase. Monique shares that Karen attended Chase’s birthday party. Oh really, is that so? Monique also mentions that Karen had a few glasses of Champagne with her. Why is Karen being called out this season for drinking or refusing to? I am honestly over it.

Monique tells Ashley she was invited to the wig shift party. Ashley shares that Karen said she wasn’t invited when they were in Portugal. She then decides to call Karen to see if she will tell Monique what she said. Miss Ashley is stirring the pot right now by cold calling our Grande Dame. The problem is our infallible Grande Dame isn’t playing this game. Karen states, “You tried it, Ashley!” and she isn’t going to take the Grande Dame down. Mic drop. Karen is our queen and won’t allow herself to be steamrolled this season with this nonsense.

Karen isn’t going to give Ashley what she wants. She obviously has changed her mind or just didn’t want to respond to the vipers in Portugal and have them shame her. It honestly doesn’t matter to me whose side she is on. I find it awesome that she holds her ground against the group’s pressure.

Robyn and Juan are looking at a $1.6 million dollar home that is 5,600-square-feet. She can afford this when she still hasn’t paid off the IRS? Robyn thinks since she is on a payment plan we should be led to believe that she can buy this house. This whole storyline is some bulls*t just like Gizelle’s reconciliation storyline with Jamal. Move on with this fluff, Bravo!

Gizelle, Angel, and Adore are celebrating Grace’s 15th birthday. She mentions Jamal coming to visit for a week for the holidays and to have a family photoshoot. Let’s just say this conversation had an undercurrent of displeasure from the girls. It is blatantly clear that the girls aren’t willing to follow their mother’s ridiculous storyline. They refuse to play a part in this soap opera and are doing their version of stonewalling this fake relationship. Grace doesn’t feel that their opinions are being considered regarding their dad coming back into their lives. We feel you, Grace. Big collective sigh.

Karen is setting up for some sexy-time with Ray. She is all glammed up and dropping flower petals to set the sexy scene. Ray comes in bearing flowers. Karen is calling him to come upstairs, and he is taking his time coming up the stairs — or he is just too old to act like he still has game! Ray is stripping down and jumping in that tub. Thank goodness that he closed the door. I definitely didn’t want to see that! Bravo sure likes to force us to watch couples in bathtubs. I think with all of those bubbles it would make for a really slippery scene and an “I have fallen and can’t get up” situation waiting to happen!

Bravo, Karen! You have got your groove back. She is going to unplug a few holes to make that happen. I love you, Miss Karen, but I really could have done without that visual!

Wendy and Eddie take her mom, Susan, on a hayride to a pumpkin patch. In her ITM, Wendy struggles with the pressure Susan has put on her all of her life. She tells Susan that she doesn’t want to be a professor anymore. Wendy wants to be a political commentator. Susan cares more about the accolades she gets from the Nigerian community than what Wendy wants to do for her career. She calls Wendy a “spoiled brat” when she dares to not follow the career path that her mom wants.

Wendy just wants appreciation for her four degrees. Maybe that is why she mentions them so much since her mom hasn’t told her how proud she is of her? I think her mentioning them CONSTANTLY on camera is to drill it in her mom’s head so she will acknowledge her hard work.

Gizelle and her girls arrive for the family photoshoot. She shares that Jamal’s flight was delayed and he is a no show for the photoshoot. Gizelle tries to cover for him not being there. She actually admits, “I don’t know where Jamal Bryant is.”

Gizelle calls Jamal and he is allegedly getting a manicure in the airport with his side-piece. In her ITM, she gets all defensive when the producer asks if she is upset that he didn’t come to the session. Well, Gizelle, stop forcing this upon us and you won’t be shamed for your bad decisions.

Ashley and Michael are preparing food for dinner. I feel for Ashley having to handle a red snapper, but the preparation stage is difficult for me. The head is still intact and the eyes are staring at you. It is frankly a little disconcerting for me. Sorry, I digress…

Sheila and Uncle Lump are coming over for dinner. Ashley thinks this is going to be a bit of an intervention for Michael. Uncle Lump expresses his disappointment in Michael. They feel like Michael cheated on the family too. Michael mumbles an apology to the family but I am not feeling any sincerity from him. I don’t think Uncle Lump does either. Move on with this crap, please.

We are at Karen’s wig event and she looks beautiful. Monique then walks in 30 minutes prior to the event getting started.  Oh my, this is going to get ugly when the others show up. Monique gets shooed out when Candiace texts that she will be there soon. Wow, that was a close one! Monique gets into her car after being there for literally minutes. Production really had their hands all over this scene IMO.

Robyn, Ashley, and Candiace arrive at the party two minutes later. Wendy joins the group and we find out Gizelle isn’t coming. Frankly, I am glad since she wouldn’t be there to support her anyway. Gizelle is perturbed that Karen’s stylist Steven slams her on social media with a lot of truths. Robyn has to shade Karen in her ITM that the party is in a strip mall. I don’t know about you all, but doesn’t it seem like Robyn has had to step up her game this season? She might have been on the chopping block since she can be such a snore.

Ray arrives to support his wife bearing flowers again. I am really proud of him coming out and standing by his lady not like some of these men.

We get to see the promotional video from the website. Karen gives Steven kudos for designing the wigs. The other ladies wonder whose business it is and basically shame the venue. The ladies try on the blonde wigs and I have to say they all look fabulous. Why does Ashley have to be so shady and give Karen antacids? She legitimately probably has an ulcer from this group of vipers.

Robyn asks, with producer prodding, “Are you afraid of what you are going to say when you drink?” Karen fires off, “You should be concerned what Juan says when he is drunk.” Ray is out when he sees the dangerous territory this is headed to. Come on now, she wants to know if she isn’t drinking since it gives her loose lips?

Karen mentions that is the “couch” in her ITM and she is going to hold onto that little tidbit of intel. Will the Grande Dame spill this tea at the reunion? I hope so!

Ashley tells the other ladies that Monique was there earlier. Karen insists that she can invite anyone she wants. She tells them there will be no gangbanging at her party. Wendy is all WTH and where are you going? Karen sashays out and I just love the look on their faces. The bill has been paid and she is out.

Candiace mentions that Karen had asked her to come early just like Monique. Hmm, I don’t know why she would set up that sh*tshow other than production forced her hand on the invite.

Wendy, Ashley, and Candiace are chatting in the parking lot. Ashley tells the ladies that Karen wanted Monique to stand her ground and share her truth. Wendy thinks Karen has no allegiance to Candiace. Nope, she sure doesn’t and she has picked her team despite pressure from the ladies. It seems like this is going to combust and we will be there front and center for the dramatic explosion!

Next week, Juan and Robyn are getting counseling and there “might be” an engagement. Michael and Chris Bassett get physical. Oy vey, this is just over the top. See you all next week!