Home Recaps RHOSLC Recap: Jen Throws a Tantrum at Whitney’s Party and Everyone Finds Out About Meredith’s Separation

RHOSLC Recap: Jen Throws a Tantrum at Whitney’s Party and Everyone Finds Out About Meredith’s Separation 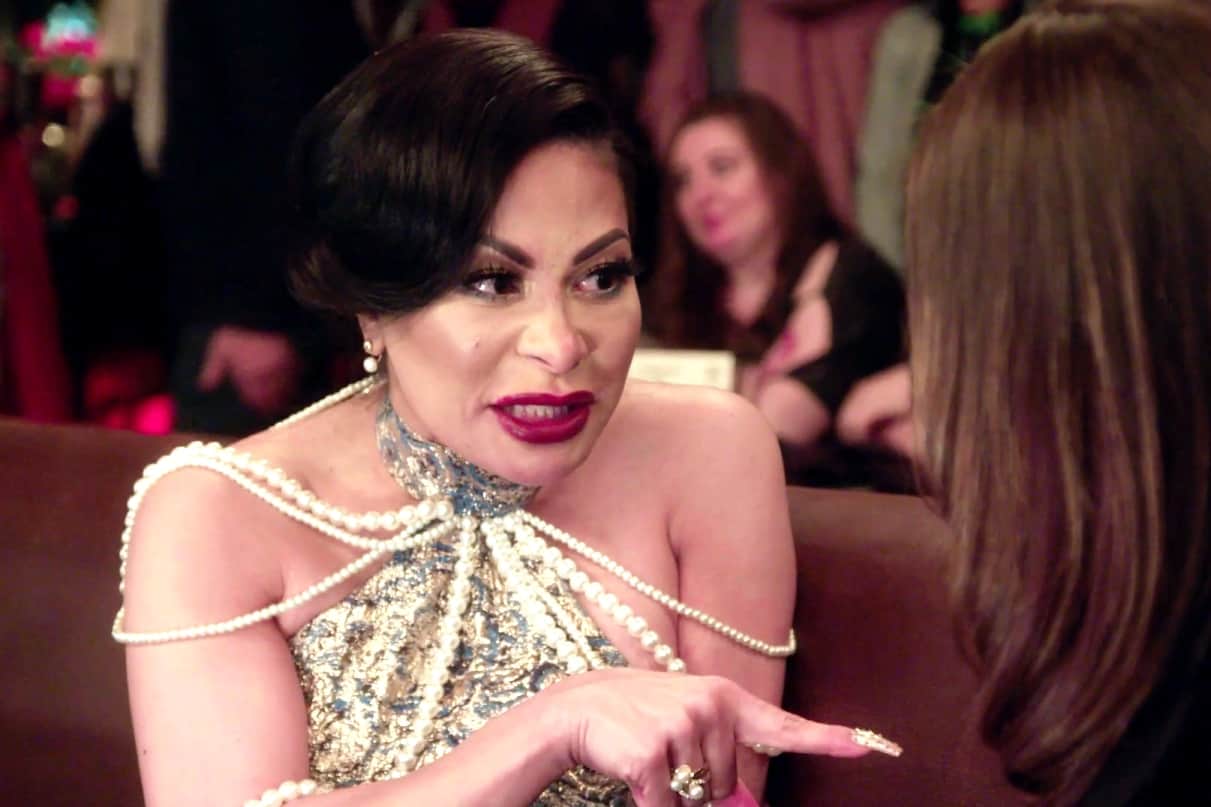 Hello, hello! And welcome back to the Real Housewives of Salt Lake City. Last episode, we left off at Whitney Rose‘s roaring ’20s party, and Jen Shah looked like she was going to have an aneurysm when she spotted Meredith Marks talking to Mary Cosby. HOW VERY DARE SHE! Let’s get right back into the action, shall we?

Whitney throws cold hard cash at the dancers and then sits down with Mary, Heather Gay, and Meredith at a table to booze it up. Jen awkwardly scooches into the booth, and she immediately summons Meredith to go talk at another table. Ten cocktails in, Jen grills Meredith about opting out of her sleepover, and Meredith, always the reasonable peacemaker, wants to discuss Jen’s insecurities when they’re not at the party.

Jen’s voice grows louder and louder, and while Meredith is keeping her cool, the other women gawk from the other table. Lisa Barlow walks over to investigate the madness, and she tells the ladies to simma down nah. After Jen howls about how bad she’s hurt, Meredith and her overly-microbladed eyebrows are like, “Whatevs, Jen, see ya,” and she slides out of the booth and onto greener pastures.

Jen then turns her wrath on Lisa, and she yells, “You’re going to go with Mary, who f***ed her grandfather?!” WHOAAAA. Many, many people at the party heard that, including Mary, who is trying to keep it together but looks mortified. Whitney and Lisa try to withhold the tequila from Jen, and ladies and gentlemen, we’ve got a shitshow on our hands.

Oh Jen, Jen, Jen. For a first-time Housewife, this girl is making some big moves four episodes in. First, she throws a Gatsby-level party for “Meredith’s birthday” and goes ham on Mary over her comments about hospital smells. Now she’s screaming at the entire cast for even talking to Mary. (But hey, from what we’ve divined about Mary, maybe Jen was onto something?)

From what I’ve gleaned in the comments section, some viewers aren’t feeling Jen’s big moves nor do they appreciate how she always seems to have her makeup gun set to ‘Clown.’ But behind all those spidery eyelashes, I see a woman that’s going to be an enduringly fun casting choice (assuming this show even gets picked up for a second season), and for that, I say THANK GOD.

Do you have any idea how scared I was to recap a show that had all the potential in the world to be the very definition of boredom? Some of you may not think RHOSLC is all that, but as a writer, I can’t tell you how pleased I am that these chicks give me A LOT to muse about, and Jen is no exception.

Aside from her being the first Tongan-Hawaiian woman cast as a Housewife (fun fact: one of every four Tongans in the U.S. call Utah home), Jen has eight million assistants, all of whom seem unphased by her over-the-top theatrics. And while Mary is gunning for the Dorit 2.0 Award for most fashiony cast member that ever fashioned, Jen keeps it simple and elegant with a style profile that solely consists of Snooki-inspired dresses, gladiator sandals, and Cookie Monster coats. (I hope you caught that big whiff of sarcasm.)

Just yesterday, we read that Jen claims to spend $50,000 a month, which…well, color me dubious, but according to public records, her husband Sharrieff made just under half a million dollars in 2018. The math doesn’t add up, but I could be missing some outrageous sources of income, who knows.

Jen slurs more expletives at Meredith and storms out of the party. Heather goes to chase after her, but NOT before telling the ladies to keep the food right where it is. Heather knows just how to handle Jen on a rampage, which is to let her do her thing, say ‘I love you,’ and leave her the hell alone afterward.

Next, we have a montage of the women’s reactions to Jen’s foul behavior at Whitney’s party, and wait, what’s this? Lisa and Heather are lunching together? I must have missed the big moment when Lisa finally acknowledged Heather after all those years of Mariah Carey-ing her.

Back at Meredith’s house, Meredith explains the drama to her son Brooks, and Brooks looks more concerned about the camera hitting the right angles of his face. (I know everyone is UGH about Brooks, but I’m finding his famewhorery amusing.)

Meredith is now at a fancy Park City gallery, and Lisa rolls in with her enormous sunglasses. They look at some tacky opulence art that is not my jam AT ALL, and then Meredith gets serious. She breaks the news to Lisa that she and Seth are separated, and this is the first time I’ve seen Lisa have any emotion whatsoever. They have a sweet moment and hug over the sad news.

Next, we get a good look at Mary’s mansion, and the place is decked out with CHRISTmas decorations. Mary greets Lisa at the door, and I gotta say…Mary’s outfit isn’t completely BONKERS this time, and I’m a little disappointed. Of course, Lisa privately snarks on Mary’s “eclectic” home decor because that’s who Lisa is: a pure grade shit talker. Robert Jr. strolls into the kitchen, open-mouthed and bored, and the ladies ask him what he got his new girlfriend for Christmas. A Prada purse!? Damn, that 17-year-old is spending some MONAY.

Lisa and Mary discuss the ’20s party, and neither of them can figure out why Jen was so upset with Meredith. Mary thinks Jen is in competition with her, thus the animosity. She is still reeling from the “grandfather f***er” comment and can’t decide on whether to invite Jen to a party she’s throwing. Mary tells Lisa this is a “no-win-win” situation, and Reader, I laughed.

Over at Heather’s house, Jen and Heather have a little heart-to-heart with a side of sushi. Heather is worried about her friend, but also a little jealous that Jen has the balls to misbehave in public. LOL. I am loving Heather’s obsession with being a Bad Girl. (Sorry, can’t help it!)

Jen’s been having a difficult time coping with her father’s death of a year ago and is very lonely during football season. She says she puts on a good front, but inside she’s just a house of cards teetering in the wind. I have read the tea leaves, and they are telling me that Jen and Sharrieff’s marriage is on shaky ground.

Jen breaks the news to Heather about Meredith’s separation and we flashback two months to when Meredith told her about it. She previously held this information under her hat, but now that Meredith stuck Jen with the knife of BETRAYAL, she gets revenge on Meredith by spilling the beans. Heather is shocked, and she can’t believe how cool as a cucumber Meredith has been while her marriage is imploding.

Mary is getting ready for her Met Gala-themed party, which is being held at Valter’s Osteria, and HEYO, I’ve been waiting for this scene! My husband works next door and snapped a couple of photos of someone rolling up to the entrance in tall stiletto boots…after a freshly fallen snowstorm. (I’m sensing a pattern here.) Mary is berating the staff, and they just look thrilled by her micro-management.

Jen is getting her makeup done by the Shah Squad at the Shah Chalet. Shah-sha-sha-shah FaceTimes with her husband Sharrieff, and he says in his coach pep talk voice, “Have some situational awareness, woman,” to which Jen is like, “Huh, what’s that?” In this scene, I wish the Shah Squad would put the paintbrushes DOWN because Jen is very pretty without so much slap.

Heather and Whitney are cruising through what looks like Daybreak (which is not exactly known for being ritzy), and both are dressed to the nines for Mary’s party. Heather tells Whitney about Meredith’s separation and talks about how the night might go, and Whitney nods along but I can totally tell she’s confused. She just plain doesn’t understand why Mary would invite Jen after what she said about grandpapa.

The ladies arrive at Mary’s party, and Whitney says exactly what’s on my mind: “There’s a red carpet, at noon, in Salt Lake City. What is going on here?” Mary is serving the girls Dom Perignon from 2003, and everyone compliments each other’s outfits. Nothing screams “Met Gala” like six people sitting at a table in an empty restaurant, amirite? LOL.

Jen shows up and the room gets tense. Mary, trying to be top dog, walks over to Jen and gives her a notebook to write something personal about herself. Meredith smirks from across the table. Mary says a prayer for the group, and Jen looks on with contempt. The ladies eat caviar and truffles, and then it’s time to share their stories.

Mary says she is trying to work on her trust issues, and Whitney declares she is NOT a swinger. Lisa tells the women that she’s extremely goal-oriented, and that’s why she’s a robot. Whitney looks like her eyes are about to roll out of her head. She and Lisa are like oil and water. Mary breaks the ice with Jen, and Jen needs a huge swig of wine to do whatever they’re about to do.

Jen breaks down and gives the ladies a little history about herself. She opens with how her dad came to the U.S. from Tonga with nary a penny in his pocket, and as the oldest of six children, Jen has a lot of responsibility toward her family because that is the Polynesian way. She was unfortunately bullied growing up in Utah, and as a result, she has a tendency to pop off.

Mary is all, “Okay, sweetie, but your words can be a weapon.” Jen apologizes to Meredith for swearing at her at the ’20s party, and as Meredith graciously accepts, Mary is thinking, “Where the fuck is my apology?” Annnnnd we have another cliffhanger until the next episode.

Next week on RHOSLC, Jen and Mary spoil a lovely Italian dinner by fighting at the table, and Whitney checks in on her dad’s addiction. Meredith and Seth bicker in the car, and he practically begs her to move to Ohio. Poor guy is trying so hard to keep this marriage together, but Meredith isn’t having it. And with that, I hope you all have a fabulous day, Blurbers! See you next time.

TELL US – WHAT DID YOU THINK OF THE EPISODE? DID YOU CATCH WHITNEY’S HAIR ON WATCH WHAT HAPPENS LIVE? WHO’S YOUR FAVORITE SLC HOUSEWIFE SO FAR?