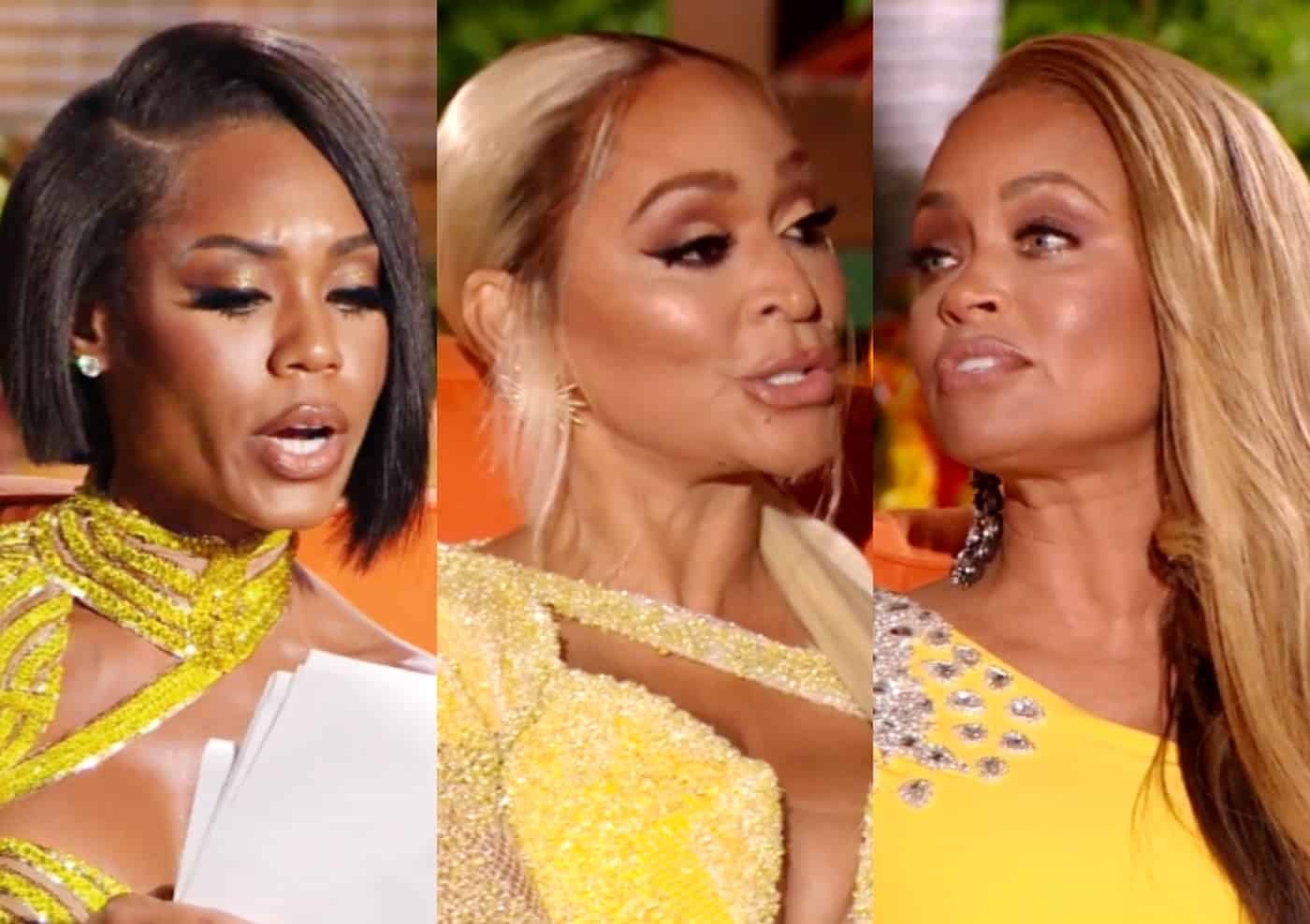 We are joining the Real Housewives of Potomac for part one of their Reunion! How will this group of divas behave after all of the ITM shade was thrown all season? Let’s watch and read those receipts they are all bringing!

We have our pre-game buildup and the ladies are getting their glam on. Candiace comes into the building with her “Over it” T-shirt. Hopefully, she is since we are all over the discord in this group!

Monique and Chris have brought T’Challa and we sure can use his comic relief. She is acting as the accountant with her book of shady receipts. I personally can’t wait to see what is in that color-coded burn book!

All of the ladies are decked out in bright yellow and they all look beautiful, but not so sure about all of that yellow. The reunion décor is all Madiera, Portugal themed. Ashley is six months pregnant with baby number two. Candiace has a fan that is either a love spreader or a hater blocker depending on the situation.

I am not quite sure what to say about Robyn’s wig. She probably should have covered that mess up with an Embellished ball cap. Robyn is probably going for trendy but the odd striping in it is not working for her. Gizelle must have told her to wear it since it draws attention away from her horrendous style! Wendy’s dress is satiny and I am just not feeling it since it looks kind of like a prom dress. 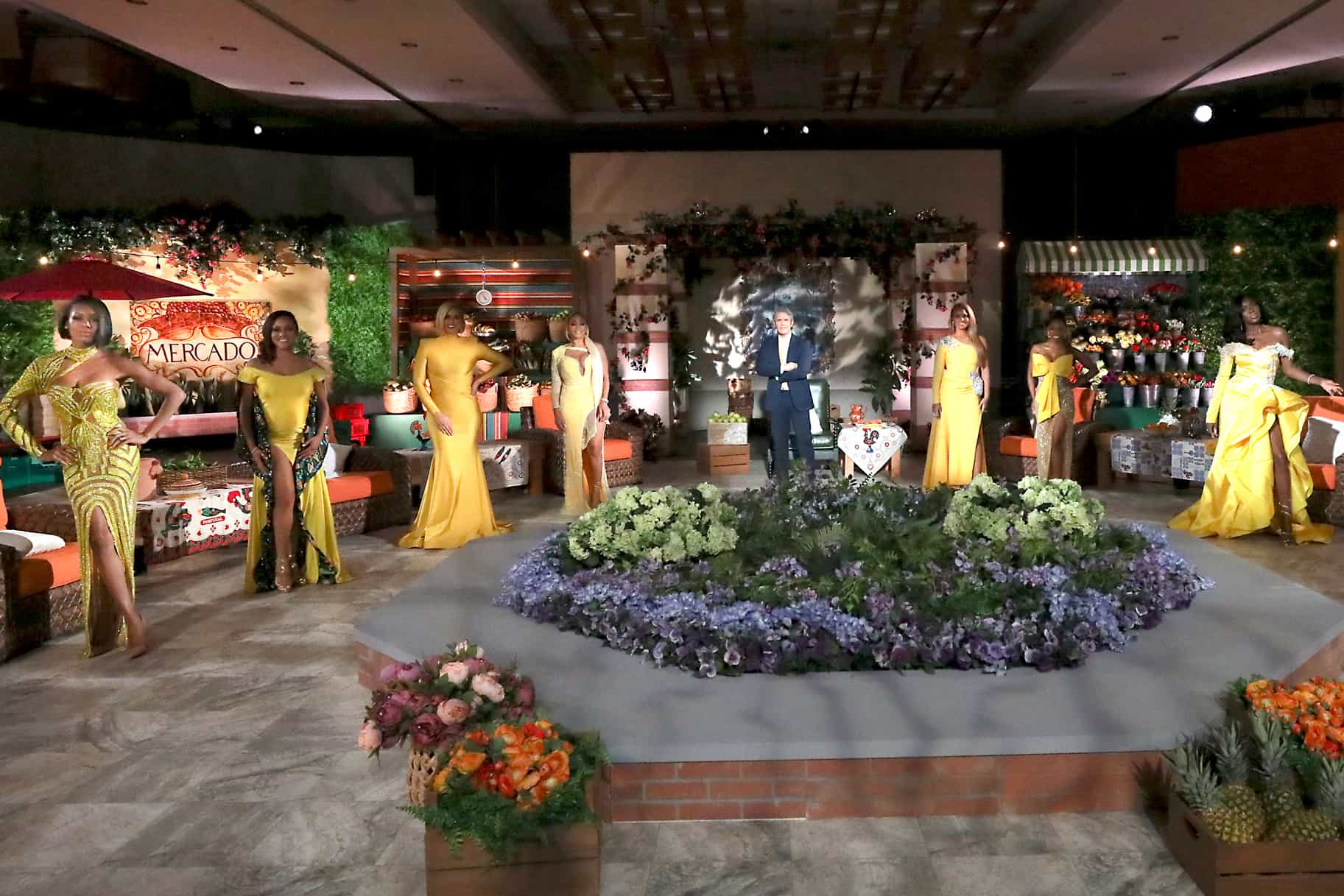 The RHOP Cast at the Season 5 reunion

Production then shows the dynamics of the group and how their relationships USED to be. The only friendships that remain the same are between the green-eyed bandits. We see the evolution of our Grande Dame’s wigs. Karen claims she has changed since both her parents passed away. Ashley’s persona has changed pretty drastically since she has become a mama and she is willing to look the other way with Michael’s transgressions. I agree with both of their assertions.

Andy shadily asks if Karen had some work done. She admits to some fillers on her nose. Why is Robyn calling Karen out on this? Ashley thinks that Gizelle has changed the least, and I agree with that, especially with her style and fake relationships.

Gizelle gets seriously shaded over her terrible fashion. She isn’t the least bit surprised that the other ladies shade her due to their jealousy .

Karen tells Gizelle she literally has trademarked her bad style. She tells her she is a beautiful woman and her bad style this season has given her comic relief while in quarantine. BOOM, our first lady of Potomac is coming out of the gate in first place! Wendy thinks Gizelle basically stopped trying to impress since she has pretty girl syndrome. I agree with Dr. Wendy on that one!

Robyn will only admit to Gizelle being risky with her fashion because she is her dear friend. Candiace thinks she just needs a stylist. Yep, a stylist and a personality adjustment too!

Karen is confronted on her social media posts and her alleged fake Fendi. Robyn and Gizelle both claim that Karen’s posts have provoked people to threaten to drag them because of their alliance with Candiace. I don’t think that is the main reason the fans are inflamed — they resent the green-eyed bandits stirring the pot all season.

We then get re-introduced to Dr. Wendy and hear about the four degrees again. My Lord, please make it stop. Huh? Did she just pronounce “divisive” wrong?! I agree with Ashley that she uses her education to put people down.

Karen gets confronted over her comments about Wendy. Gizelle gets called out for adding floozy to the freelancer title that she said came from Karen. She pivots to protect herself and then spills that Karen wants Wendy fired from the show. Gizelle accepted Wendy pretty quickly — probably because she was hoping she would bring Karen down. Never going to happen, hail to our Potomac Queen!

Karen is willing to give Wendy another chance and isn’t trying to Mother Goose her. She agrees they may have had a rough first year but is hopeful about their relationship. I personally think Wendy came in hot hopeful that she could yank the crown off of our Queen and that sh*t wasn’t happening. We then get to see the infamous slither walk. I could watch that on repeat! Pricele$$.

Candiace’s season is rehashed starting with her re-make of her song to Chris. She says her song wasn’t autotuned and Andy asks about Ashley’s song. Candiace says, “Ashley’s song is trash.” She gets questioned about moving out of Dorothy’s house. Candiace will let Chris B. answer that question, but we already know she bought a new $1 million home.

Andy thinks Candiace is a disaster on Twitter. She shifts the narrative and goes nuclear on Ashley and Michael. Candiace thinks that Michael is basically a walking STD. She might have a valid point on that one. Michael sure gets around!

Andy shares that a viewer on social media questions if there is some colorism going on with the fact that Wendy and Candiace are darker-skinned and they are called aggressive. Wendy, the so-educated one, thinks that the fact that she is a darker-skinned female does get her targeted. She thinks using the buzzwords “aggressive” and “ferocious” are inflammatory. Wendy claims she is getting slammed over this on social media.

Monique, who is darker-skinned as well, thinks the words are accurately describing the actions. Wendy isn’t making sense, IMO, saying there are a plethora of words to describe an aggressive woman. I have been called aggressive and I admit my actions could be described as such. Just own it, ladies!

Candiace thinks she uses her words very well and can use her words to her detriment. She isn’t willing to give up her aggressive stance on Twitter. There, I said it, and it doesn’t have anything to do with her being a woman. Candiace tells Andy that she and Chris bought a new house and she insists it was without her mom’s help. They did get a rubber plant .

Karen asks if Candiace is pregnant and she gets all nasty, saying, “I am not pregnant, b*tch.” Wendy snarkily smiles at that one. Why is it okay to bite Karen’s head off and call her a b*tch when Candiace contemplated motherhood all season? Dr. Wendy, you are acting hypocritical!

Andy calls for a five-minute break and Wendy is all put out since she can’t get a makeup touchup. I like when they show these little chats when they are just sitting around. Monique tells Ashley she is tired of all of the fakery and she can’t wait to whip out her binder of shady receipts.

Gizelle, the anointed one, finally gets called out for her bullsh*t relationship with Jamal. We are subjected to all of her girls and especially her dad’s displeasure with this farce of a relationship. Her dad refuses to pretend he is happy his daughter’s ex-husband has six to seven baby mamas.

Gizelle’s lack of home décor design skills are called out too. Karen calls Gizelle’s house the Ronald McDonald house. LOL, I am cracking up here. Gizelle has to age shame her and tell her that her Geritol is kicking in. There is a little ageism going on when Karen puts her finger in Gizelle’s cage!

Karen is gunning for Gizelle and her Ever Hue business is being liquidated. Gizelle will only admit to her manufacturer being shut down to COVID. She gets called out for her hypocrisy since she slammed Karen’s La Dame fragrance. #JusticeforKaren.

Jamal can’t come around due to COVID? The word on the street is that the relationship is a sham. Gizelle is questioned over Jamal, and Karen calls her out, saying it is an arrangement so she can remain a housewife. Did he just have another baby with another woman? Damn! That man is virile! And Karen is asking all the right questions right now! Oh my stars, this is getting really deep!

I do think that Karen is setting up the scene for Monique to allow this crazy train to go off the rails. Monique has heard from Jamal’s alleged real girlfriend who has provided her with pictures and text messages. In what can only be described as the most dramatic moment of a reunion, Monique starts reading out these text messages in which Jamal can be heard allegedly trying to make plans to see this other woman and allegedly telling her the whole thing with Gizelle isn’t real. Monique even knows Jamal’s phone number and reads it out only for Gizelle to confirm it is indeed Jamal’s number. Yikes! Gizelle looks like she just ate the most bitter lemon. I am loving that this farce of a relationship is being called out with receipts.

As Monique has out her receipt book showing texts from his girlfriend, Karen, not so innocently, asks, “Is Jamal with his big D coming to the Reunion?” Gizelle, who is squirming in her too-tight dress, can barely get out that he isn’t attending . Monique calls him the Pastor Holy Whore! Whoa!

Must say the look on Andy Cohen’s face sums up this reunion perfectly!

Wow, this is bananas already and it is only part one! Can’t imagine what we will deal with in part two! Hang on to your weaves and buckle up for a wild three-part reunion for these RHOP! See you all next week, and have a wonderful holiday week!