Home Real Housewives of Atlanta News RHOA Recap: Kenya Takes a Private Jet and Upsets Costars Who Have to Travel on a Hot Bus to Girls’ Trip, Plus are Porsha and Dennis Back Together?

RHOA Recap: Kenya Takes a Private Jet and Upsets Costars Who Have to Travel on a Hot Bus to Girls’ Trip, Plus are Porsha and Dennis Back Together? 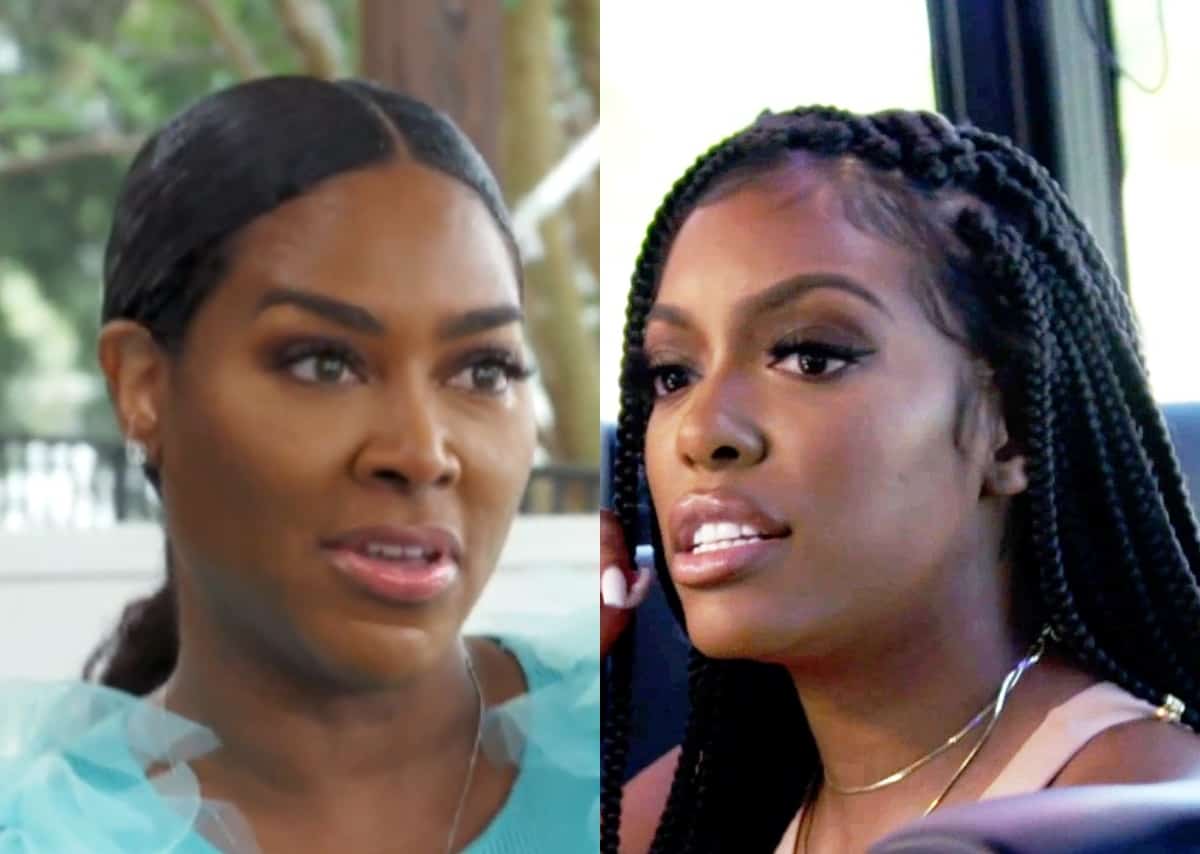 This week on the Real Housewives of Atlanta, we are finally headed to South Carolina! Are we going to get the skinny on what went on at the raunchy bachelorette party, or will Bravo keep dragging us along? Sorry, it is more of the latter…

I must forewarn you all that Bravo keeps giving us carrots to keep us watching, but the drama again doesn’t materialize. Kenya, in this episode, has been tasked to accelerate the drama to keep us all engaged by stirring the pot. This episode was a letdown, but let’s make the best of it, shall we?

Cynthia is trying to call all of the ladies and keeps getting sent to voicemail. Haven’t we all been there before?

Drew and Ralph are spending some time together and he bought her a scooter. She is now sharing with us why she hasn’t been at all of the past events. Drew suffered an ankle injury, which put her out of commission. She needs a getaway and is going despite her bum ankle. I don’t know if it is such a good idea to expect someone who just had ankle surgery to be able to balance on a scooter.

Drew has decided to invite all of the ladies over for a Hollywood glamour dinner before they go on their girls’ trip. She needs to pregame it and see what she is in for with this group. I have to say their neighborhood is really beautiful. Ralph and Drew are really getting along well — for now anyway.

Kenya, who is wearing a really tacky powder blue feather top, and Latoya are meeting up for breakfast. She brought some lingerie to give to Latoya that she claims she hasn’t worn. When did Kenya wear a 32D? Latoya smells the underwear, which frankly made me throw up in my mouth. YUCK.

Kenya tells Latoya that she has arranged for them to fly private since she is bringing Brooklyn and the nanny on the plane. In her ITM, the producer asks her if she cares if the others are upset. Kenya, of course, doesn’t give a crap and insinuates some of them have bad credit and couldn’t afford the extravagances that she can. Drew calls during breakfast and invites Kenya over for dinner, and rather reluctantly, Latoya.

Kenya and Latoya discuss the dynamic with Marc and co-parenting with Brooklyn. She is still negotiating with Marc over the terms of their child custody. I think Kenya is using Brooklyn to keep in contact with Marc. There is no explanation of if she truly has full custody, and so why she is dragging this sh*t out?

Latoya asks, “How long has it been toxic?” and there are literally crickets. I felt like I was at the table with my hand raised wanting to say, “Since the freaking beginning!”

It is the night of Drew’s dinner and she is wearing some bizarre getup with way too much purple eyeshadow. Drew is definitely going to get shaded over her wig named Sasha as well. She really should bring less attention to that wig since it looks like a poodle ponytail. Maybe she just likes wearing pets on her head?

Ralph is helping set up and they seem to be really happy. They went from heading to a divorce to being all handsy with each other.

Can someone please answer the darn door at this house! Cynthia is banging on the door and is stuck on the front porch. Kandi arrives and no one again is answering the door. Kenya arrives dancing like she is all that in her Adidas dress and sneakers.

Porsha arrives wearing that awful red wig. I guess she is trying to compete with Drew’s bad wig(s). Porsha tells Drew that Latoya was shading her about her edges showing. Drew unsuccessfully defends her quarantine wig. She asks her producer, “What does Latoya do for a living?” She is told she has a YouTube channel. Drew scoffs at that bullsh*t job and isn’t impressed. She doesn’t like being clowned around Atlanta about her wig by a YouTuber.

The producer, in Porsha’s ITM, is asking her about Ralph and his looks. She thinks that it’s Kenya’s MO to hit on the other ladies’ husbands. BOOM! Nice, Porsha, and very accurate!

In her ITM, Kenya shows her VERY jelly side shading Drew. She is really threatened by her, isn’t she? Kenya picked the weakest link to partner up with this season by being buddy-buddy with Latoya. Big mistake, Kenya, HUGE!

Drew sings “Amazing Grace” for the table. She can sing and I honestly never tire of that song. Production shows a clip from a previous reunion where Porsha is singing the same song. She wants to lay claim on singing that song first on this show.

Kenya tells the group that she has arranged a sprinter van for the group to travel to SC. Drew decides to start some drama by poking the Kenya bear and inquiring about her travel accommodations. Kenya has to finally admit she is going first class “wheels up,” and the rest of them are heading to the bus station. She is pocketing this for later so Drew better watch her back.

Kandi thinks that Kenya is acting all rich. Cynthia is going to skip the sprinter since she has a business obligation. Drew and Ralph are getting all frisky when the house clears out. He wants to pull that poodle pony.

Porsha makes arrangements for Dennis to take care of PJ. She calls Mama Diane and shares that Dennis is Mr. Mom and has at least some of his priorities straight with his little girl.

Todd thinks that Kandi looks thick like Meghan Thee Stallion. He gives her an idea to turn the trip into a bachelorette party with a dungeon influence. I don’t know if Todd could have predicted that it turned out the way it did. We are led to believe from the previews it was like debauchery on steroids.

We are finally leaving for South Carolina for the girls’ trip. Kenya and Latoya are driving to the airport together. They discuss how Porsha was telling Drew about the wig shade. Latoya thinks that Porsha is acting all extra. Hmm, nope, I think you have been angling for a bite of the Georgia peach all season but Drew snagged it first!

Dennis brings Porsha to Kandi’s house. She claims it was better than having to call an Uber. I am just relieved she left the red wig at home hopefully in the dumpster. Shamea joins the group so it looks like the first all-cast plus friends’ trip this season. Porsha wants to go in for a group kiss, but Kandi isn’t going there since she tends to wants more and insinuate far worse happened.

Tanya, the thirsty peach, arrives to get her camera time. Marlo came in a hazmat suit? She is traveling on public transportation, you know? Marlo is definitely trying to be an attention who*e since she pulls that thing off pretty quick and strips down to a black tube-top.

Kandi asks Porsha about her dinner date with Dennis. She is working toward co-parenting. No one believes her that nothing happened. Did Dennis really sleep on the sofa? Come on now, girl. I don’t believe it either. You don’t keep getting those gifts without, ahem, giving up some goodies.

Kenya disembarks off the plane and is twirling away. Why is Brooklyn blurred out? Is Marc not allowing her to be filmed?

On the bus, the other ladies are complaining about their nether regions getting all wet and salty. Marlo wants to inquire about who has had threesomes. She will only participate in something like that for cash. Now that I believe! Tanya wants to know if Kandi and Todd have people sign an NDA before shacking up with them. For sure!

The beach house is absolutely gorgeous. Kenya and Latoya are assigning the rooms since they arrived first. Bravo is so darn predictable with this whole fighting for a room crap on every housewives’ trip. That whole manufactured drama has become really stale.

The ladies on the bus are bitching about riding on the “janky hot reject bus.” Porsha didn’t want to get a WAP from a bus with no air. They see on Instagram that Kenya posted that she brought Brooklyn on the plane, and we now have another baby drama just like Potomac. We then have a to-be-continued…

Next week, is it going to finally get interesting? It looks like everyone gets turnt up! Drew is going to unleash her inner Chicago on these bit*hes. Be safe and have a fabulous week!

TELL US — ARE YOU LOOKING FORWARD TO STRIPPER-GATE?