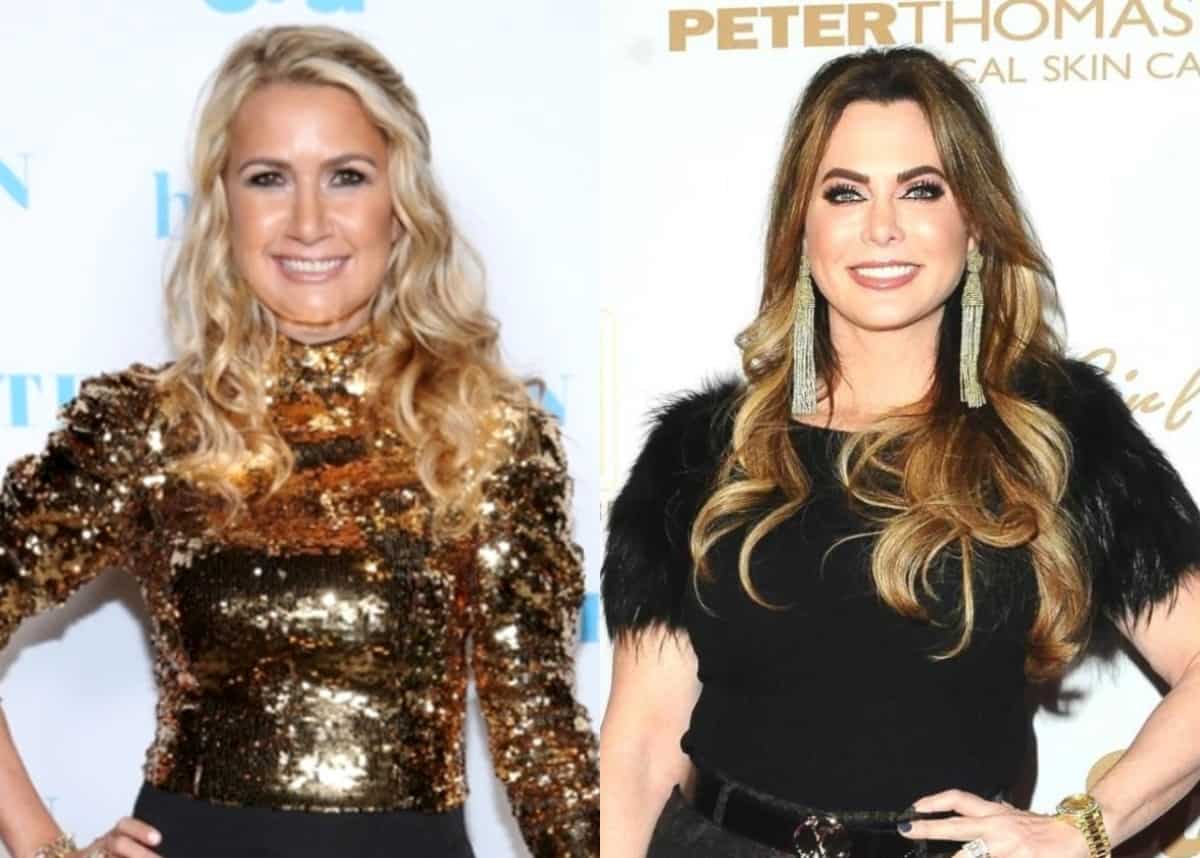 Kary Brittingham and D’Andra Simmons were at odds during Tuesday night’s episode of The Real Housewives of Dallas, and on Twitter, they reacted to their girls’ trip screaming match.

After Kary was seen accusing D’Andra of being a liar and a bad friend, she took to Twitter to admit to making mistakes in their friendship as D’Andra fired back at her by accusing her of being a “bully” and complaining about her many critiques.

Following a post from a fanpage in which it was noted that Kary was “passive aggressive” and should have gone directly to D’Andra with her issues about their friendship, Kary admitted she should have handled things differently. 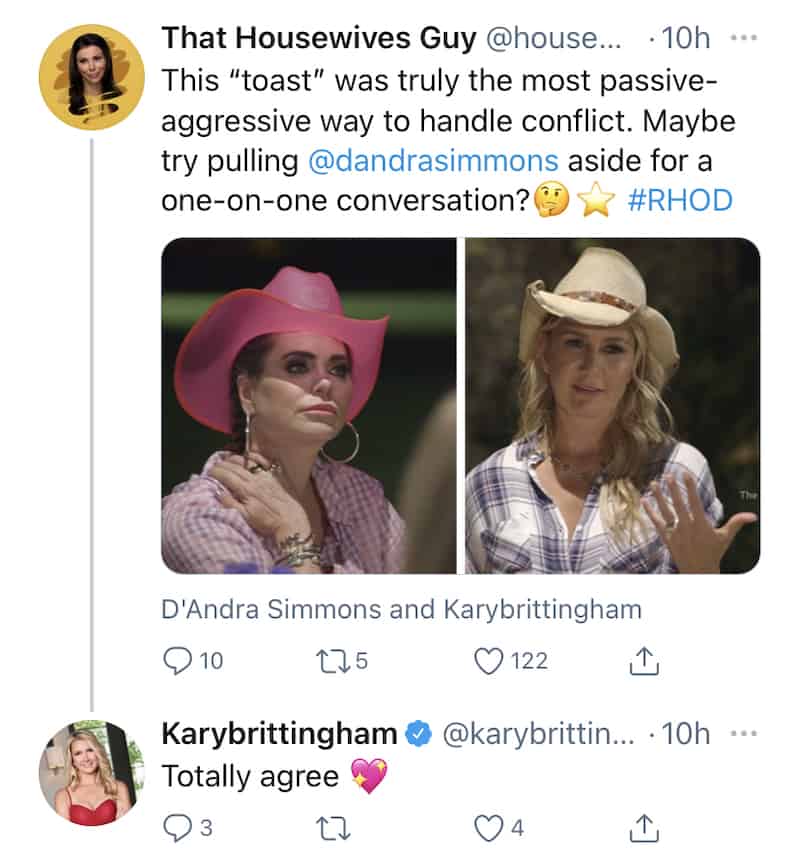 Then, when someone asked how Kary was the victim in her dispute with D’Andra, Kary revealed there was much more going on between her and D’Andra than what fans saw during Tuesday’s show.

“Just remember you only see 1 [percent] of everything that happens. I should have talked to [D’Andra] about everything I was feeling. But you will see it play out the next few episodes,” she teased. 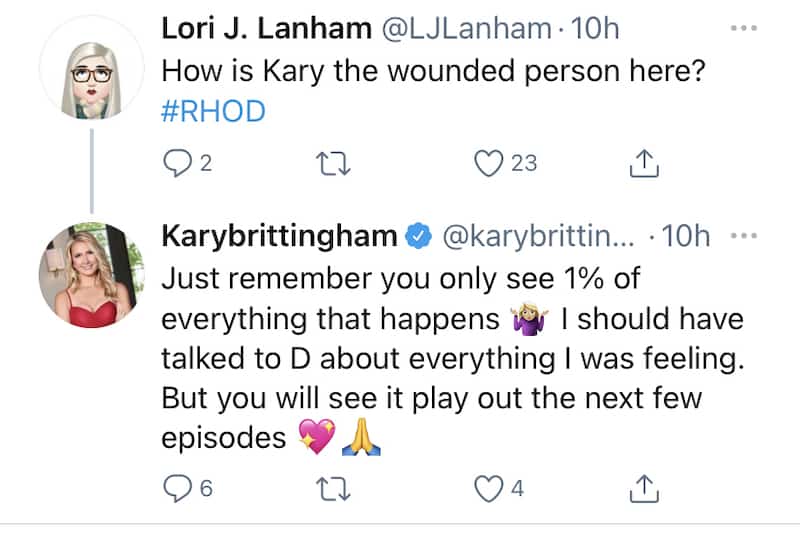 Meanwhile, on D’Andra’s Twitter account, she responded to a fan who accused Kary of being a “bully” and saying her behavior at the ladies’ dinner was “hands down gaslighting at its finest.” 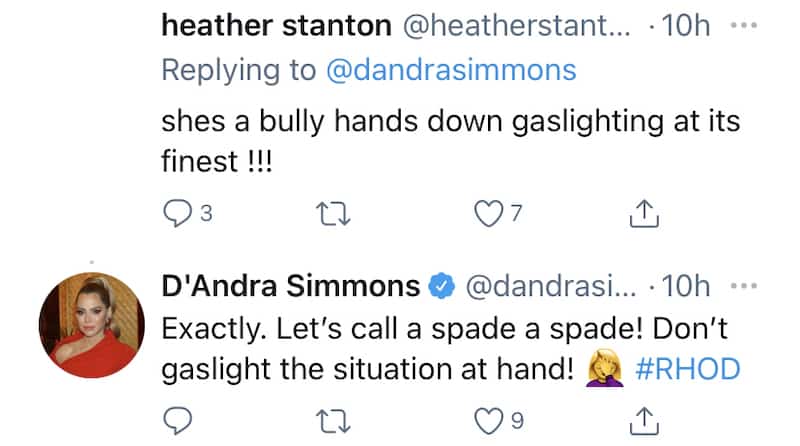 In another series of tweets, D’Andra said Kary was the “real bully” of the show before offering a response to a woman who said Kary “exhausts [her] with all her complaining.”

“I don’t understand why I’m always getting critiqued by her!” D’Andra said. 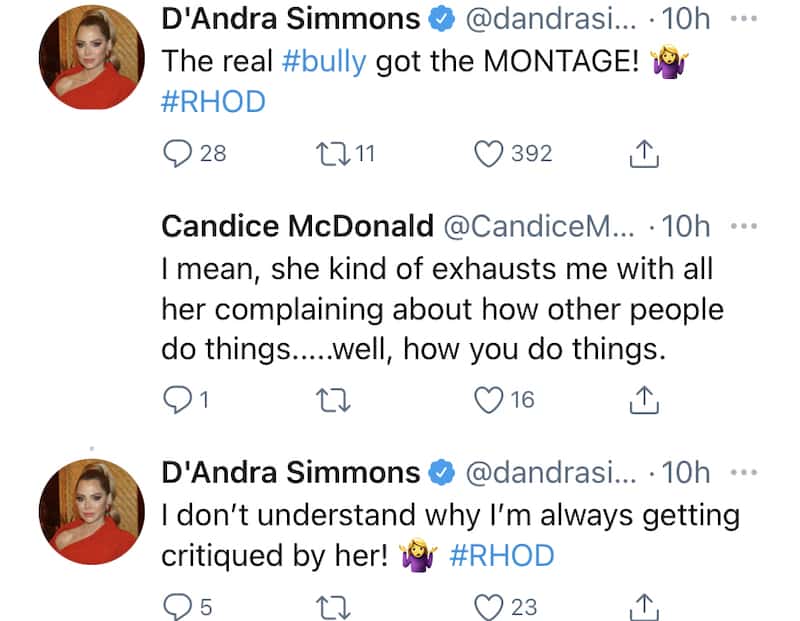 Last week, during an appearance on Access Hollywood’s Housewives Nightcap, D’Andra took aim at Kary for spewing “vitriol and hateful speech” at her each week on RHOD.

“She’s so dead-set on destroying me as a friend and as a person and the things that she says are really hurtful,” D’Andra explained. “To hear that I’m selfish and that I’m not a good friend and that she wants to keep me at an arm’s length, it really surprised me because I didn’t know she had such deep-seated feelings.”

D’Andra also said that if Kary hopes to reconcile their friendship, she’s going to have to do some self-reflection.