Home Real Housewives of Atlanta News RHOA Recap: Porsha Walks Out On The Ladies After Being Accused Of Sleeping With Stripper Bolo, Kenya Admits To Crushing On LaToya And Marc Files For Divorce 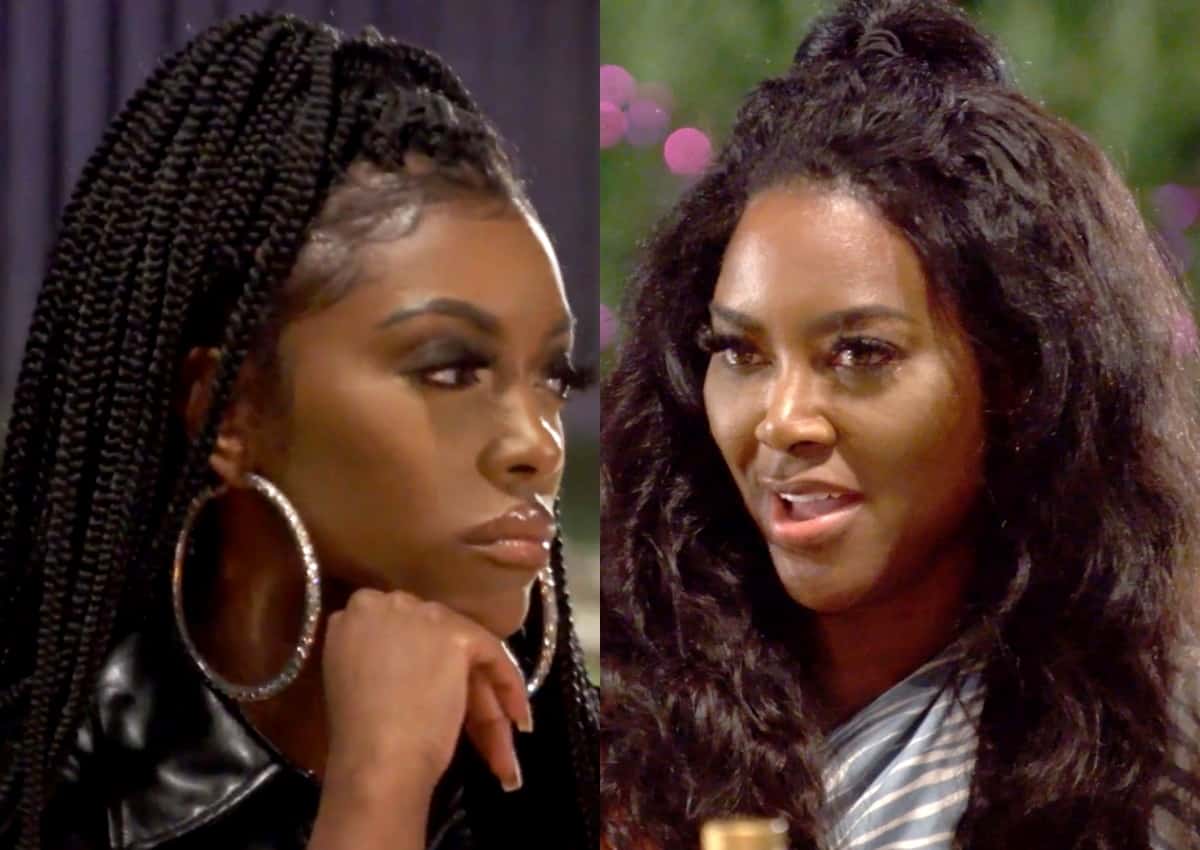 This week on the Real Housewives of Atlanta, this episode is pretty anti-climactic compared to the previous weeks, but there are some new revelations so we will dive in! Let’s see what our voluptuous peaches are up to, shall we?

We begin back at the last supper at the beach house. Cynthia admits to being a voyeur since she got a little hot and bothered watching all of the sexy-time. She had to go back to her room to release some of her sexual tension. Cynthia is still processing how big Bolo’s member was. She thinks having sex with Bolo results in having a bladder infection. Fun!

LaToya is acting all innocent about her actions and seems to have some amnesia. Drew isn’t digging that she is trying to shame her about being a married woman and participating in the sexy antics. She is no longer Drew’s only fan, but she’s still trying to pull that remaining peach off the housewife tree.

Kenya is still conducting her bullsh*t investigation. LaToya then pivots and is questioning why her little friend Kenya is shaming the other ladies. Marlo is corroborating Kenya’s story that there was a sex party going on. I guess these two rival peaches are still maintaining their cease-fire.

Tanya thinks Kenya must have been hearing things. She claims that Kenya hasn’t gotten it in a long time so she was imagining things. Kenya definitely wasn’t a little innocent virgin especially with her legs busted wide open. Take some ownership lickety-split!

Kenya, the judgmental auntie, is doing a breakdown by the room assignments. Tanya, the thirsty one, shares that she was in Porsha’s room. She will do anything to pluck that peach from the tree and puts herself at the scene of the sexy crime. Kenya has to suggest that they should have conducted themselves better with Brooklyn under the same roof. That was your choice, honey, to subject your baby to a girls’ bachelorette weekend.

Porsha is really annoyed by the whole conversation. She wants no part of this shaming and wants to go home early. Porsha, the holy one, will not allow Kenya to destroy what God built. Kandi is pissed that Kenya is not respecting the “no judgment zone” for whatever happened in SC stayed there.

Drew is now home with her family. She came home to their new 9,220-square-foot house. They still have a lot of boxes to unpack, but it is impressive that he got this done on his own. Sorry, I have to give the man props for pulling that off.

Drew tells Ralph that the trip was crazy. She tells him everything that went on. Drew tells him that the dungeon came to the coast. She admits that she did a booty clap for Bolo and he may have smacked it a few times. Drew thinks a wife should always be honest with her husband but that is a two-way street. Remember Tampa, Ralph?

Cynthia and Mike are catching up after her girls’ trip. She tells him that the stripper was very well endowed. Mike’s wheels are turning hearing this. Cynthia describes Bolo’s windshield wiper thing with his large package. She thinks Mike’s equipment is good but Bolo is a freak of nature. Cynthia shares that someone was getting it on in the early morning hours. Mike looks concerned that this stuff was going on, but he is doing his best now to try to upstage Bolo by giving Cyn a lap dance. Sorry, Mike, you can’t compete with Bolo’s rolling thrusts or his very large package!

Kandi is telling Don Juan about what went on for the weekend. She is a vault and still won’t share all of the debauchery that went down. Kandi will say that Porsha was in heat and practicing procreation. She can’t understand why Tanya put herself at the scene of the crime. Don Juan knew something was up since he got a call from the car service to convey that Bolo never went to his hotel. He thinks that Bolo got some social justice snatch. #porshaforreal

Drew and Ralph are getting into what he did in Tampa. She doesn’t think he was unfaithful but he is being really sketchy. Ralph thinks she just wants stupid details but refuses to disclose what those little details are. He needs to show Drew the same honesty she clearly shows him. Drew thinks Ralph should be proud since she can now use her new tricks at home. I am sorry but these two have some serious communication issues and their conversations are painful to watch.

Kenya is having an Alpha Magazine photoshoot and she looks like she is wearing a bodysuit made out of pork casing. She was chosen as a cover model because of her business acumen. Kenya got this gig because of her hairline but it looks like a matted mess. She should have worn the wig that we all know she has at home. I also can’t believe that Kenya is getting modeling gigs looking like she does now.

LaToya arrives with a cake and comes to the shoot to kiss a*s. Kenya is annoyed with LaToya that she jumped ship and wasn’t supporting her at the beach. LaToya didn’t like that Kenya was putting everyone on blast. Kenya thought LaToya was p*ssy whipped by the other women.

Drew and Porsha are chatting about all of Kenya’s hypocrisy on the trip. She lives close by now to Porsha, so are we to assume these two will now be BFFs? Porsha admires that Drew has a good bullsh*t meter. She will turn up like the best of them. Porsha doesn’t like Kenya slut-shaming them. Kenya conveniently forgets that she was rolling around on the floor with her legs busted wide open.

Porsha thinks Kenya is on a mission to destroy her. She is breaking girl code and it isn’t cool. Ralph calls Drew and she fibs and doesn’t tell him that she stopped at Porsha’s house. Now that is some justice, Ms. Sidora, make him wonder where you are at for once! Drew tells Porsha that she was honest with Ralph about what she did. She still has concerns over what he did in Tampa, though.

Porsha is still working on her issues with Dennis. She is still in love with him. Porsha wants to maintain a familial relationship with him since he is PJ’s dad. She is learning about her part in the breakup and how her actions contributed to the breakup.

We now have some really cute kid scenes. Little Ace and Blaze are playing a game that I think is called the toilet trouble game with Kandi. They are just precious. Porsha is helping little PJ brush her teeth. I love the scenes with the little ones. We then get a filler scene with nonsense about Cynthia’s ashy feet. Move on, production!

Kenya visits her lawyer about her divorce and custody situation. She has filed for custody, not divorce. The producer inquires, “Why did she do that first?” I was frankly surprised she didn’t bite her head off since she doesn’t like being challenged on her decisions.

Excuse me, did I just hear that Marc is sending her love songs? What is that all about? Marc must have mailed it to the wrong address. Kenya thinks Marc can’t express himself and needs to share his feelings through song. He was pretty clear, in my opinion, expressing that he has nothing but contempt for Ms. Daly.

Marc has filed a gotcha motion on Kenya. He filed for divorce in New York City and he wants her to pay alimony. Marc didn’t even ask for custody. Kenya deserves this crap since she is acting like a total doormat for this guy to wipe his feet on. She had the opportunity to file first and she let him bullsh*t her to hold her off.

Kenya has been played like a fool. She thinks he retaliated since they attempted to serve him first. Marc doesn’t want her or Brooklyn but wants her cash. They will be filing a dismissal since he did it in New York but this is another expense and delay. Kenya has again allowed Marc to get the best of her. Production, please move this tiresome storyline along! We at least have some episodes to look forward to when we get the upcoming episode trailer!

We now get the mid-season trailer with the ladies heading to New Orleans! Yay, more vacation footage! Page Six got a hold of the bachelorette party information. Kenya and Marlo are still buddy-buddy. Wow, these clips are off the chain! Have a fabulous week and take care!

TELL US — DO YOU THINK KENYA REALLY HAS A CRUSH ON LATOYA?