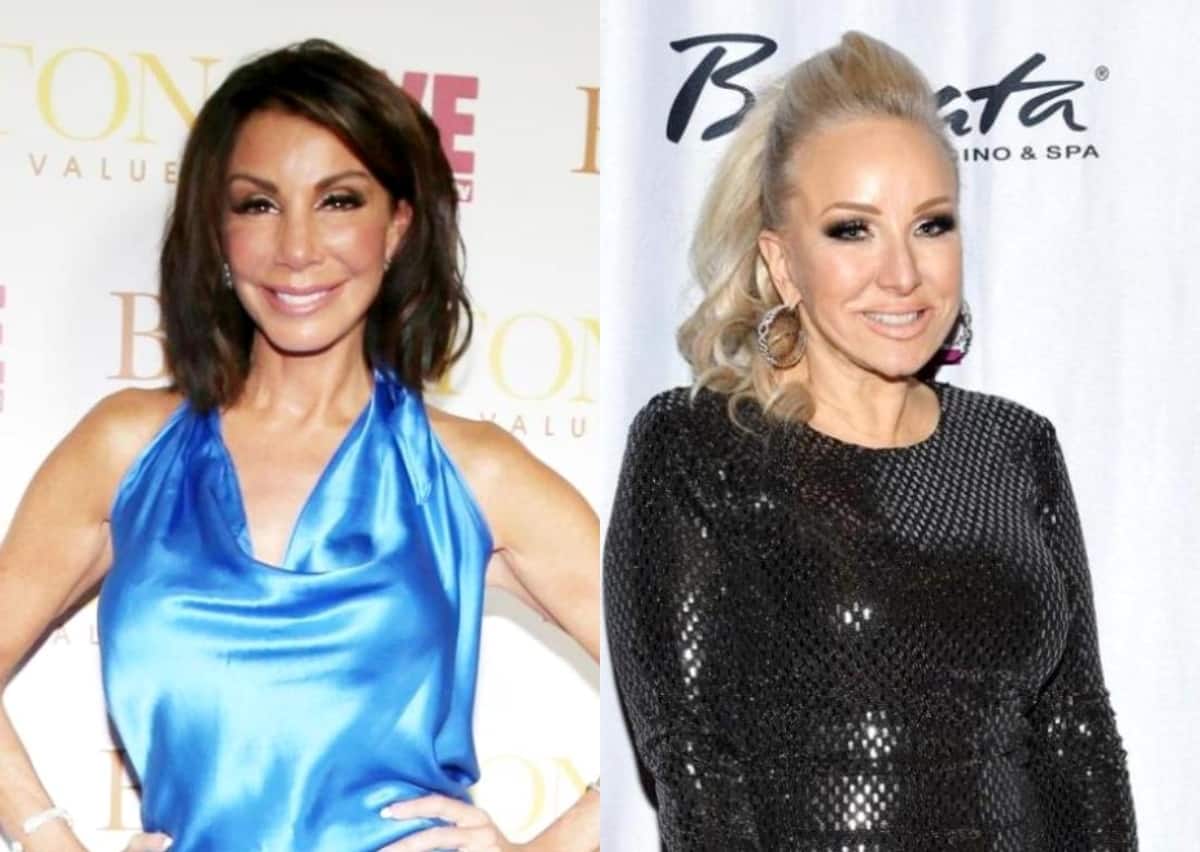 Danielle and Margaret are not the best of friends after suffering a massive falling out just as Danielle was set to marry her last husband, Marty Caffrey. Since then, the women have traded jabs and a hair pull and accused one another of some very shady things.

Danielle announced she was leaving the show as season 10 was still airing, but she is apparently still a huge fan. The former reality star has been hosting Instagram Live watch parties, and as she was watching Jackie and Teresa Giudice face off at Margaret’s home about the possibility of Evan cheating, she made a shocking accusation.

“That’s so bad! Oh my gosh, Margaret, you know this came from her,” Danielle alleged. “That’s why Margaret’s pacing in the background, that’s what’s going on right now guys. Okay, now I’ve figured it out. Margaret’s always underneath it, behind it, that’s why they filmed at her house because she’s the source.”

In a recent interview, Margaret was asked about her foe’s accusation, and she clapped back hard at her “insane” former co-star.

“How funny is that? I mean, she’ll throw any s**t at the wall and make it stick,” she told Entertainment Tonight. “She’s insane. Yeah, I think my face was obvious — I was the source of the rumor? When Teresa said it, I mean, I was in shock.”

Margaret added, “I think [Danielle’s] sad, and desperate, to hang on to something that was never hers.”

Nevertheless, this isn’t the first time the Macbeth collection CEO has been forced to deny playing a role in the cheating rumors. On the March 3 episode, Margaret’s husband, Joe Benigno, was seen telling the husbands that he had been hearing all about the cheating rumors in his home. Several viewers began to call Margaret out via Twitter, with one accusing her of knowing about the rumor all along, but Margaret was determined to set the record straight.

“If I heard it I would have called Jackie off camera and she would have known and we would have been prepared,” she tweeted. “The first time I heard it was at Evan’s, and Joe heard it non stop in our house.” 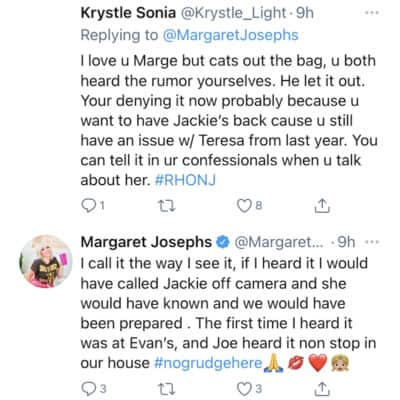 Then, she clapped back again when another fan alleged that she went to production with the rumor.

“I think if I told production Teresa would have thrown me under the bus and not came to me with the rumor duh,” Margaret wrote. “These conspiracy theories are as far fetched as Trump won the election.” 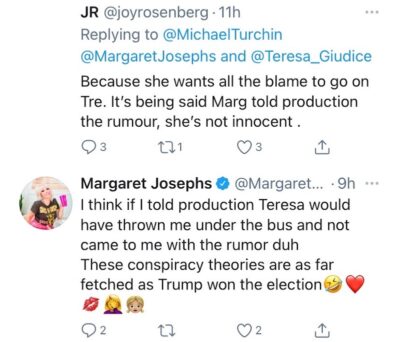