Home Recaps RHONJ Recap: Teresa Accuses Melissa of Flirting With Another Man in Prank Call to Joe; Jennifer Claims Joe Owes Someone Money and Teresa Blows Up on Costars 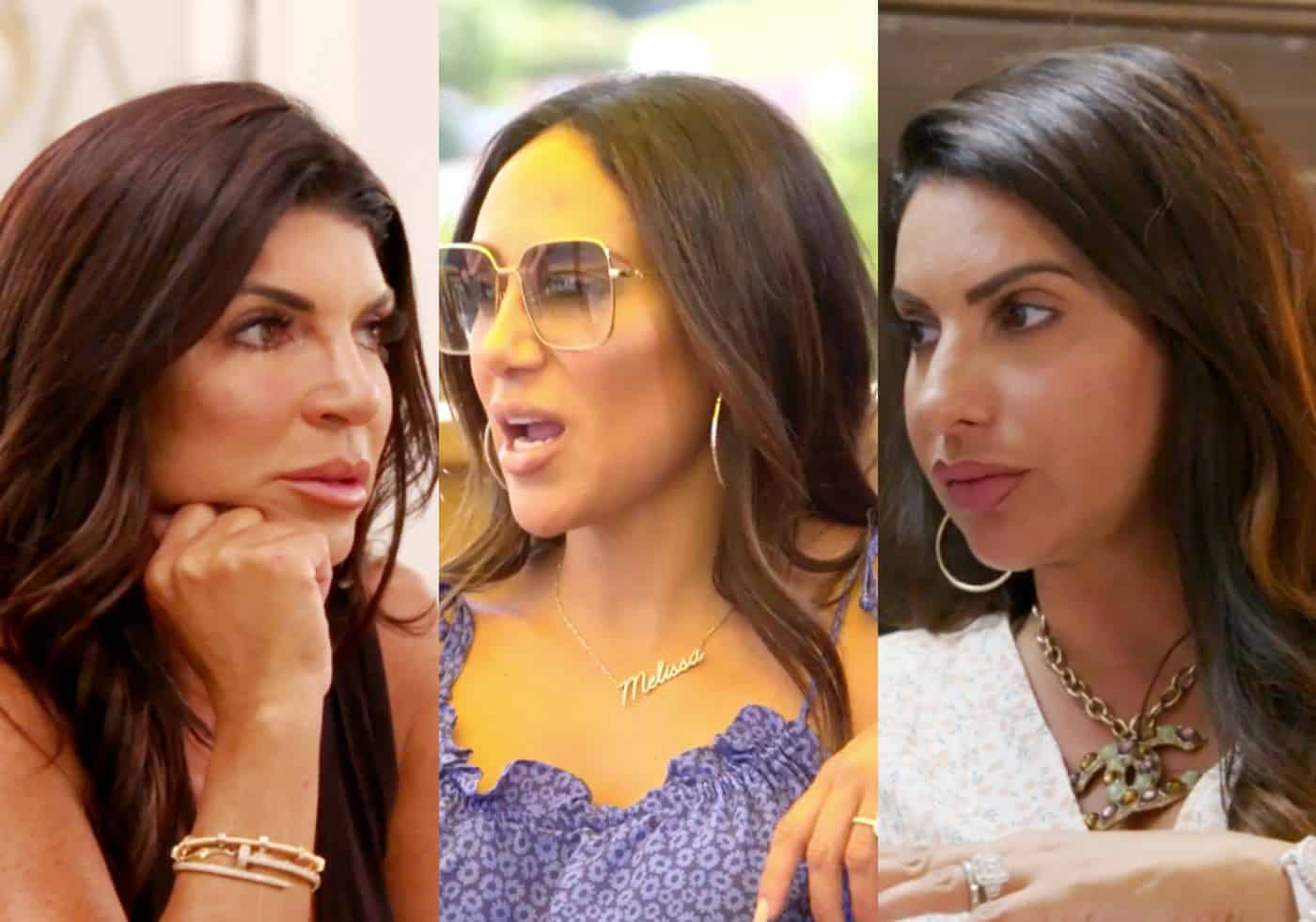 This week on The Real Housewives of New Jersey, we return to our Jersey ladies back at the beautiful Lake George. Let’s see what kind of mischief they can get into.

Production has been teasing that Melissa has been having an inappropriate relationship with another man. That was a lead-up to a total nothing burger storyline. Sorry, guys, we need to move on to this week’s real storyline.

Margaret calls Joe B. and shares that no matter what she does to convince Teresa to calm the f*ck down, nothing is working. She misses Jackie and is bummed she didn’t come to be around Teresa, the Barbarian.

Teresa says she won’t call and apologize to her since she perceives what she said as an apology. She just wants her to move on or she should just shove it up her a*s. Teresa thinks Jackie’s visceral reaction signifies that she must have skeletons in her closet. Maybe you might know something about that, right, Teresa?

Dolores has to chime in that she doesn’t have the energy to deal with Jackie’s emotional side. There is truth to that because she has practice being around emotionless robots named David.

Teresa wants shots at 11 in the morning. Dolores and Teresa then are sharing a strawberry mouth to mouth. Yuck, some things you can never un-see.

The ladies head out to lunch at the marina. It looks so pretty to sit out and enjoy the scenery. They will be going out on a tiki hut boat later. The joys of a relaxed girls’ trip — for now!

Teresa gets a call from her realtor, Michelle, who will be our new housewife. I guess her introduction to this group required her to bring some crap up for her try-out. Teresa thinks it is time to move on and sell her house (Click Here to See Photos of Teresa’s Home Listing). Production shows some old footage with their kids moving into that gaudy monstrosity.

Melissa shares that Antonia has a new boyfriend named Zack. Milania is encouraging them to accept Zack since he isn’t trying to have sex with Antonia, yet. That is a good boyfriend barometer, Milania. Maybe you can give some advice to your mom next?

Melissa shares how she can’t just go out since Joe gets really jealous. Joe makes her concerned that he will retaliate by going out with his friends. Jennifer, in her ITM, snootily states that you must not have a trusting relationship if you can’t go out without your spouse getting suspicious. Melissa shares a story that Joe went to a strip club and Teresa was in attendance. I have brothers and I NEVER want to see them in this setting. Thank you very much!

In their ITMs, not everyone wants to answer the question of when they lost their virginity. Jennifer, Dolores, and Teresa aren’t giving up that tidbit of knowledge. I have to comment on Teresa’s (aka Morticia Addams) look, which is just awful. I am not the least bit interested to hear their responses to this question. Most would be untruthful anyway except Jennifer since it was arranged that she be a virgin on her wedding night.

They load up on the tiki boat and it is a booze cruise. Now that sounds fun! The boat captain might get flashed if they have enough cocktails. They decide to prank call Joe Gorga and pretend Melissa is texting with a guy there who owns a restaurant. Joe quickly replies and wants to know what is going on.

Teresa calls Joe and lays it on thick describing how Melissa was flirting with this guy. She actually describes Melissa taking attention away from her by cock-blocking her from this alleged guy. Teresa might have actually explained her true feelings about Melissa by acting out her actions. Joe even starts speaking in Italian when he gets a little agitated. Margaret is mesmerized by Teresa’s ability to blatantly lie to Joe. She thinks she deserves an Oscar. Teresa then tells Joe he was punked and he says it was really corny. Joe only believed it since it came from Teresa. Thick as thieves, those two.

The ladies head back to the house and Melissa is trashed. Teresa falls asleep in the van with her mouth wide open. Not a good look. Melissa decides to pull down Margaret’s dress to show off her tits since she is obsessed with other women’s body parts. They are all talking about teabagging and Ms. Giudice isn’t a fan of this type of sex-play. Now that is probably the only one she isn’t in favor of.

Melissa calls Joe to make sure that he isn’t pissed. Joe says he only spoke in Italian so his kids wouldn’t think their mom is a dirty whore. How sweet, what a good dad you are! Melissa is then nearby when Jennifer swoops in to tell Dolores the gossip she heard from Michelle, the realtor.

Jennifer tells Dolores that Realtor Michelle told her that Joe Gorga owes her husband money for some work he did. Did she just say with a straight face that she wouldn’t normally repeat idle gossip? Give me a break; those secrets are just waiting to overflow from your very large lips! Jennifer brings Dolores to her room so Melissa won’t overhear it. Dolores wants Jennifer to tell Melissa but to be careful when and how she shares it. She would want to know if it was Frank Catania — probably because it happened so often.

The husbands get together for a guys’ night. Bill, please be careful with this group, they can be a bad influence! Frank comes since David can’t make time to show up for his woman’s filming obligations. I am frankly not surprised since David won’t even let his girlfriend live with him! That was really funny when Frank had some sushi with wasabi! He was sweating like a pig!

The guys sit down for a poker game. Joe B. wins the game. Frank randomly asks if anyone’s wife has asked if they can bring someone else home with them. He frames the question like it is a normal request from a wife. When no one bites, Frank toasts to them being a bunch of boring guys. No wonder this player isn’t married anymore.

Joe tells the guys how he was punked by the ladies. He thinks Melissa would never cheat since he is such a stud. Keep telling yourself that, Mr. Gorga!

Joe B. claims he may have had heard the rumor before from some of the vociferous women that hang out at his house.  The consensus is that Evan was faithful but Joe B. is at 1%. I have to say I would rather spend the evening with the guys instead of hanging with the shrill Teresa or watching Margaret’s face melt by the fire.

Margaret and Melissa decide to call Jackie to let her know that they miss her. Jackie claims this rumor has hurt Evan’s reputation and to please clear his name. She will not apologize about the Gia analogy. Jackie refuses to do anything but wait for an apology. Hell will freeze over before Teresa’s blockhead clears enough to realize she made a mistake. Remember there are a lot of skeletons and cobwebs in that attic space of hers!

Margaret shares what Jackie said with the group. Teresa thinks Jackie is digging in her heels and she is a weakling. She is going to blow her casket over this if they keep pressuring her! Teresa has some real challenges with the English language. She might want to take a Hooked on Phonics course. Did Teresa just say that she had been secure in her relationship? The only time this dolt was secure was when she was locked up in prison.

Melissa thinks Teresa should call and apologize to Evan. Teresa wants an apology about the analogy so now we again have a housewife stalemate. She is leaving since she can’t take the heat and told them to go f*ck themselves. That Teresa is such a sweetheart, isn’t she? Ugh, she is so awful on so many levels.

Teresa resents that it is five against one. I found something that she can do — she can count. The ladies decide to table this discussion so they can finally have a good time. Marge gives all of the ladies these tacky sweatshirts that they have to wear by the fire pit. It is a good idea just in case they need kindling. They keep hearing something walking through the woods and run away screeching! Till next week…

Next week, we are still in Lake George and Jennifer tells Melissa what Michelle said about Joe. Evan and Jackie discuss how they can move on after this crap. See you all then!

WHOSE SIDE ARE YOU ON: JACKIE’S OR TERESA’S? TELL US IN THE COMMENTS!