RHONJ Recap: Margaret and Danielle Get Into a Violent Fight as Teresa Reveals She Signed a Prenup 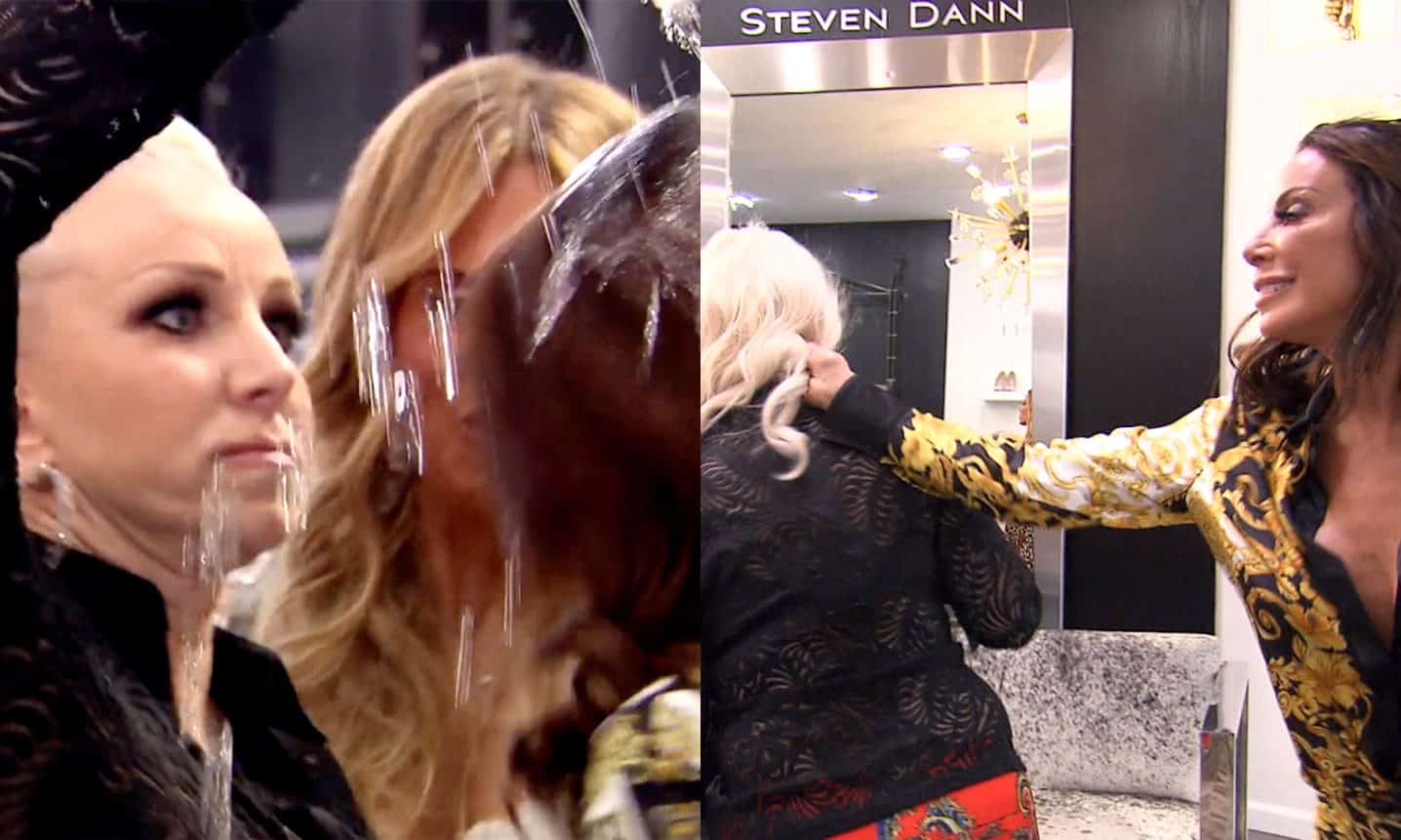 On this week’s episode of The Real Housewives of New Jersey, we will witness the “hair pull heard around the world,” and Gia is at the end of her rope with her parents putting her constantly in the middle…

Melissa and Joe have that ridiculous conversation with their kids about expanding their family. I love how Antonia basically tells them you are overwhelmed with the three of us. You don’t need any more kids! There are several videos shown that illustrate how they can be a handful at times, and it’s clear that Antonia doesn’t want any more screaming brats in the house. I can’t blame her for that.

Melissa still pretends to her children that the stork comes to deliver a baby? Are you freaking kidding me? Antonia tells them she learned everything she needs to know in health class. She then demonstrates the visual for her dad when he questions her. She is definitely her father’s daughter!

Teresa visits with Danielle at her Marty’s house where she is essentially squatting. They discuss how Joe is really struggling. Teresa shares that her dad Giacinto is presently in the hospital with pneumonia. Teresa then reveals she has a friend who is looking for free airtime named Steven Dann who is having a shopping event. She invites Danielle to come, which we all know is going to be a total staged s**t show.

Marty and Danielle are still cohabitating so I believe she is “ahem” working off her end of the mortgage. It is bizarre how they still act like a married couple. They discuss the “banging” rumor and they basically say it is no one’s business.

Danielle claims it is Margaret’s fault they are divorced. Why is that — because she staged an intervention so he could escape from his cray cray wife? I call her a hero for that one, not a bully! Danielle must have forgotten she was a bridezilla on steroids. Teresa thinks Margaret is bullying Danielle trying to break them up. She is definitely not the sharpest tool in the box and a perfect patsy to have to film with Danielle.

Gia and Teresa are dress shopping for her prom dress and Joe Giudice calls. Joe is ranting about how all Teresa does is spend money. He calls her Robin Hood! Hold up, Joe! That is not even a possibility since you left out an important component with your little analogy. You both have defrauded the rich banks and your business partners, but you definitely did not give it to the poor and needy!

Teresa thinks he is losing his mind while being detained in ICE. He claims she is spending all of his money on hair and nails and she could have retired on it. Teresa is angry that he feels that way since she claims she has been busting her a** trying to support her family and having her hot ex-boyfriend install a new pool.

Gia wants both of her parents to just shut up about it. She thinks her mom needs to cut her dad some slack since he is fighting for his life in that sh**hole. Gia is sick of hearing her parents bicker over the phone. She doesn’t want to have to be the adult all the time and have to parent these two dysfunctional idiots people!

Teresa then shares in her ITM that Joe made her sign a prenup? She said he was just a “nothing,” which is pretty telling where her priorities have always been. She claims there was an infidelity clause and we all know he wasn’t faithful so is she saying it is now void? Joe said he never wanted to marry her in the first place. Teresa signed the prenup because she didn’t want to embarrass her family and herself and call off the wedding. Teresa has always made it sound like they had this great marriage, but this shows how it started out on really shaky ground.

Jennifer is having an Easter celebration at their house, and her family is coming for the traditional Turkish dinner. They are Syrian Orthodox and they eat a whole lamb for the holiday. I could have done without the lamb head being delivered to the table by Grandma Josephine while the kids leave the table totally traumatized. Jennifer claims it doesn’t even make her mother flinch handling that nasty carcass. I would most definitely run screaming from the table as well if I was a kid there.

Jennifer’s brother Michael says his fiancée Melda is still waiting on a visa in Turkey. They aren’t together even though they are engaged. It is ironic that another family in this franchise is dealing with immigration issues as well.

Jennifer’s daughter Gabby talks with her grandma Josephine regarding her gay uncle Steve. She mentions in school we are taught to love each other equally. The grandma doesn’t seem too pleased that Gabby knows about her uncle’s sexuality and acts like she was totally unaware. Jennifer is troubled her mom is lying about her brother.

Dolores and her dad Larry are at his cardiac rehab appointment since he has a widow maker. Dolores goes to her dad’s appointment since he is really non-compliant. Her dad discusses David’s comment at Easter and you can tell he is not thrilled with his comment regarding their future. He didn’t like the whole “he just wanted to finish the house” bullsh** reply. Dolores is in la la land denial regarding David with her ridiculous assertion that she is such a strong Jersey girl and her “job” is to stand by her man.

Melissa, Margaret, and Jackie meet for dinner. It is foreshadowing that they are discussing Margaret’s hairstyle… They discuss how they all celebrated Easter and Melissa shares how upset Teresa’s girls are over their dad. They discuss the text message from Teresa with the invite to the shopping event. Danielle is coming to the event in a “really expensive outfit” bought by one of her 19 fiancées according to her group text reply.

Margaret thinks Danielle and Teresa are in a lesbian relationship since they are so chummy. She doesn’t understand Teresa’s blind loyalty to Danielle. Margaret reminds them that Danielle accused Marty of not only abusing her but her children as well. Why would anyone in their right mind support that relationship? Does she not know Teresa? Melissa, who needs all of the attention on her, shares that she dipped in the lady pond while in college. Okay, thirsty much?

The ladies are headed to the Steven Dann shopping event. Production has this one planned to save this sinking ship amp up the drama since who in their right mind would ever put Margaret and Danielle under the same roof? Danielle arrives and the topic changes to Margaret and her meddling. Danielle throws the first grenade and says Margaret has a trout mouth and cankles.

Jackie shares that her husband has never gone down on her? Boy, is she missing out! She says she loves sex but doesn’t like blow jobs so maybe that’s why he is not so accommodating? Jennifer says she doesn’t like 69s since they are too uncomfortable!

Teresa acts really poorly like she is offended by the other ladies dissing Danielle. When Teresa tries to defend Danielle like an uneducated fool, even her loyal soldier Dolores isn’t having it. Margaret goes balls to the wall! She shares a litany of Danielle’s transgressions while Teresa has a glazed expression and defends the indefensible.

Danielle tries to say she is a good person and Margaret paid Joe, who is now her husband, to f*** her. Margaret says, “Danielle has been dragged and ridden hard,” which sounded like a somewhat accurate description of her. Danielle then says, “Margaret’s titties have been dragged as well and need an overhaul.” Margaret then pours a bottle of water over Danielle’s head. Danielle, aka Versace Clad Elephant, and Margaret, aka Trout Mouth, are going to scrap now for sure!

The look on the other shoppers’ faces is beyond hilarious! How do they even find places to film? Danielle takes Margaret’s purse and dumps it. She then slams it on the table and empties the contents into the $675 candle. As Danielle says, “I can’t help myself anymore,” she yanks the crap out of Margaret’s ponytail and jerks her head back. You can’t have a Jersey brawl without some weave pulling!

We will have to wait until next week to see how that turns out! My money is on Margaret since she is not the least bit intimidated by Danielle and she will throw her a** down … Watch out, this sh** is getting real! Jersey-style!