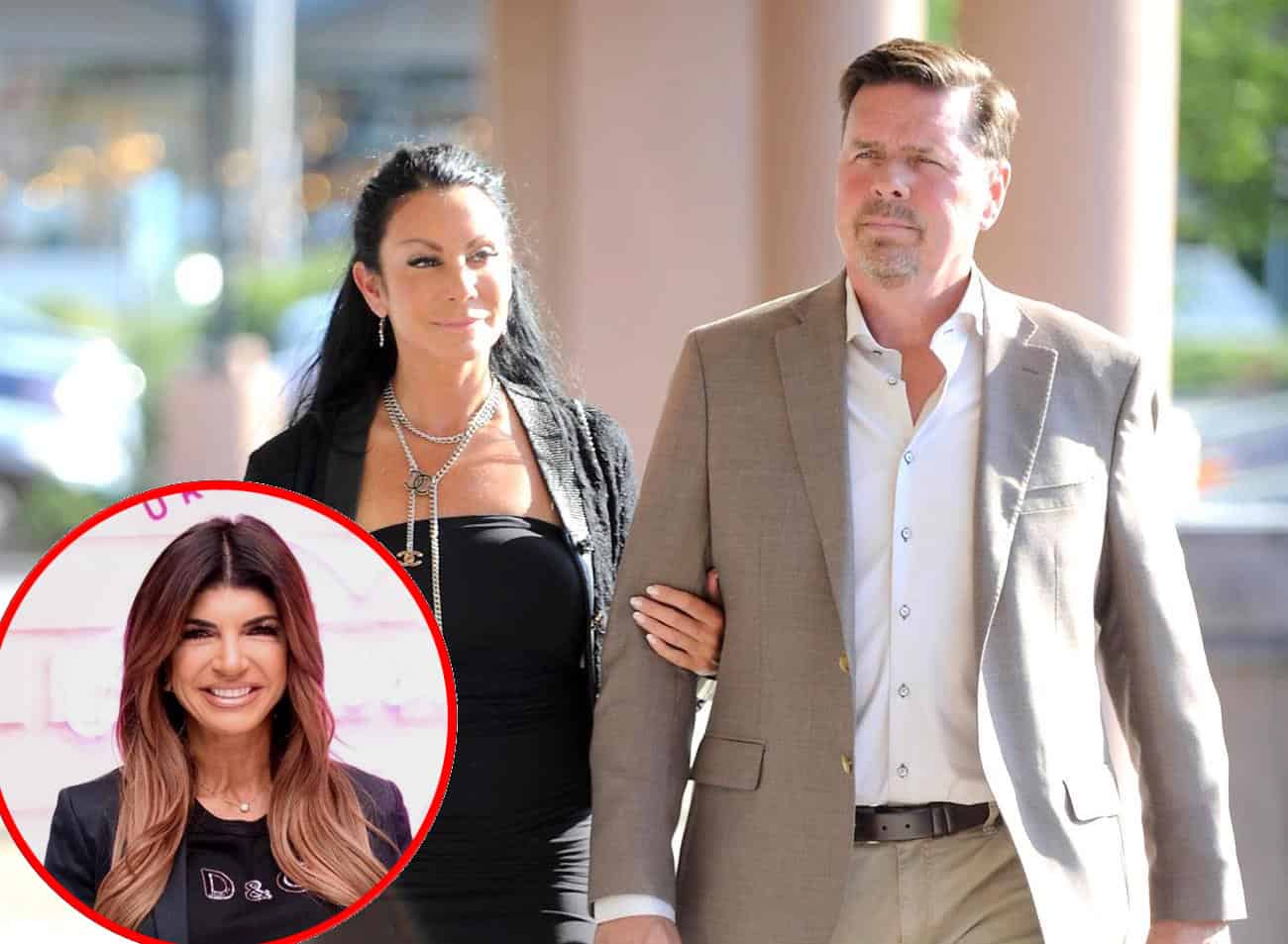 Marty Caffrey, ex-husband to Real Housewives of New Jersey star Danielle Staub is defending the Bravo-lebrity on Instagram while taking shots at her co-stars. Plus, Danielle spills the details on what it was like to sleep with her ex after their divorce.

During the most recent RHONJ episode, the estranged couple was rumored to have slept together even though Marty denied it on camera while on speakerphone with his then-ally, Margaret Josephs. Despite his denial, Marty is adding more fuel to the rumors of a reconciliation after taking to Instagram to defend Danielle.

Bravo’s official Instagram account posted a photo in honor of the trending “10 year challenge” earlier this week, featuring their first guest ever Danielle, to show how much Watch What Happens Live and its now-iconic clubhouse has changed over the last decade.

But in the comment section, some followers had nasty things to say about Danielle. However, one fan stood up for her, stating that “if it wasn’t for [Danielle] New Jersey housewives would have been cancelled. She put them on the map! Period.”

Surprisingly, Danielle’s ex-husband commented on the fan’s bold statement, agreeing with what they had to say.

“Exactly. They all owe their paychecks and careers to [Danielle] when they really think about it.” Marty replied. “There’s a reason she was Andy’s first guest and Teresa wasn’t. Even today they all have to constantly invoke Danielle to be relevant, when she’s not even there to stand up for herself. Without her do any of them even have a storyline to this day?” 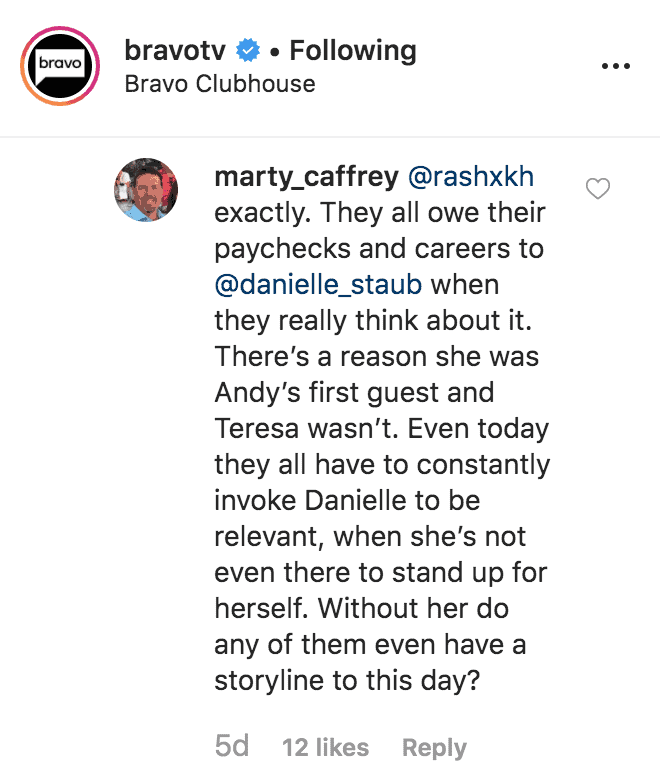 And in an even more surprising turn of events, Danielle also added some words to the string of comments, thanking both the Instagram user and Marty for their kind words.

“@Marty_Caffrey awww thank you Marty for speaking on my behalf. Truly Means a lot!” wrote Danielle. 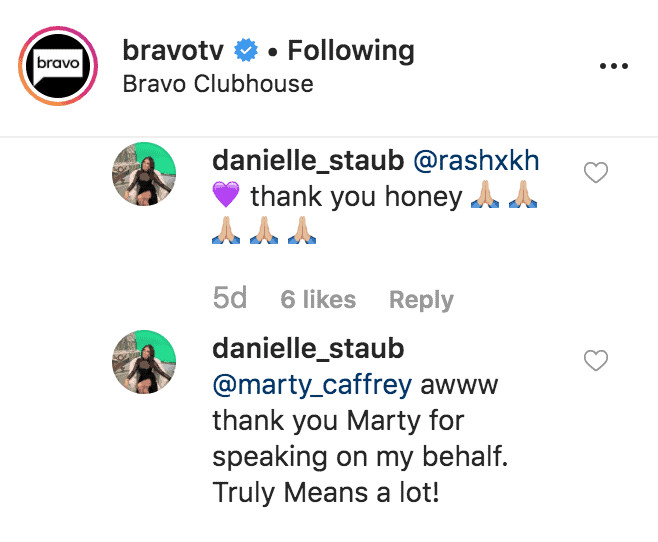 However, Marty wasn’t done yet as he took a more direct shot at Teresa Giudice, who is currently embroiled in a feud with Danielle.

“Teresa has 2 storylines. Her family situation and Danielle,” wrote Marty. “After Joe’s deportation story is over she’ll have nothing except Danielle. All you need to see is her entrance to Bravocon. She was made famous by Danielle… The RHONJ segment at Bravo was all about Danielle and she’s just a friend. What does that tell you?” 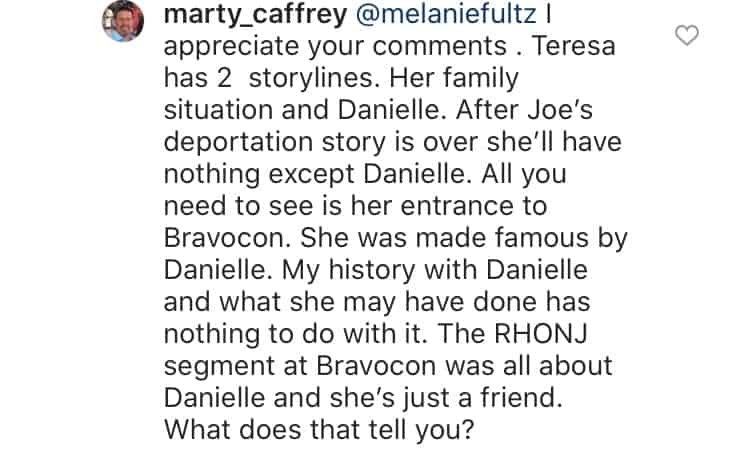 And while Marty denied hooking up with Danielle on the show, Danielle came clean during the RHONJ After Show this week, admitting that she found comfort in her familiar connection with Marty, who asked for a divorce just three months after their wedding.

“He had been quite warm towards me which was odd and I couldn’t figure out what to do with that so we would, you know, just do what a married couple would do when I would lay on his chest and we would take a nap together, and one thing led to another,” Danielle explained to the camera on the After Show. “It was very warm, it was beautiful, it was actually one of the best parts of our — well, the only good part — of our divorce was that. We were reconnecting.”

But according to recent reports, Danielle has not gotten back together with Marty and is putting her love life on hold for the time being.