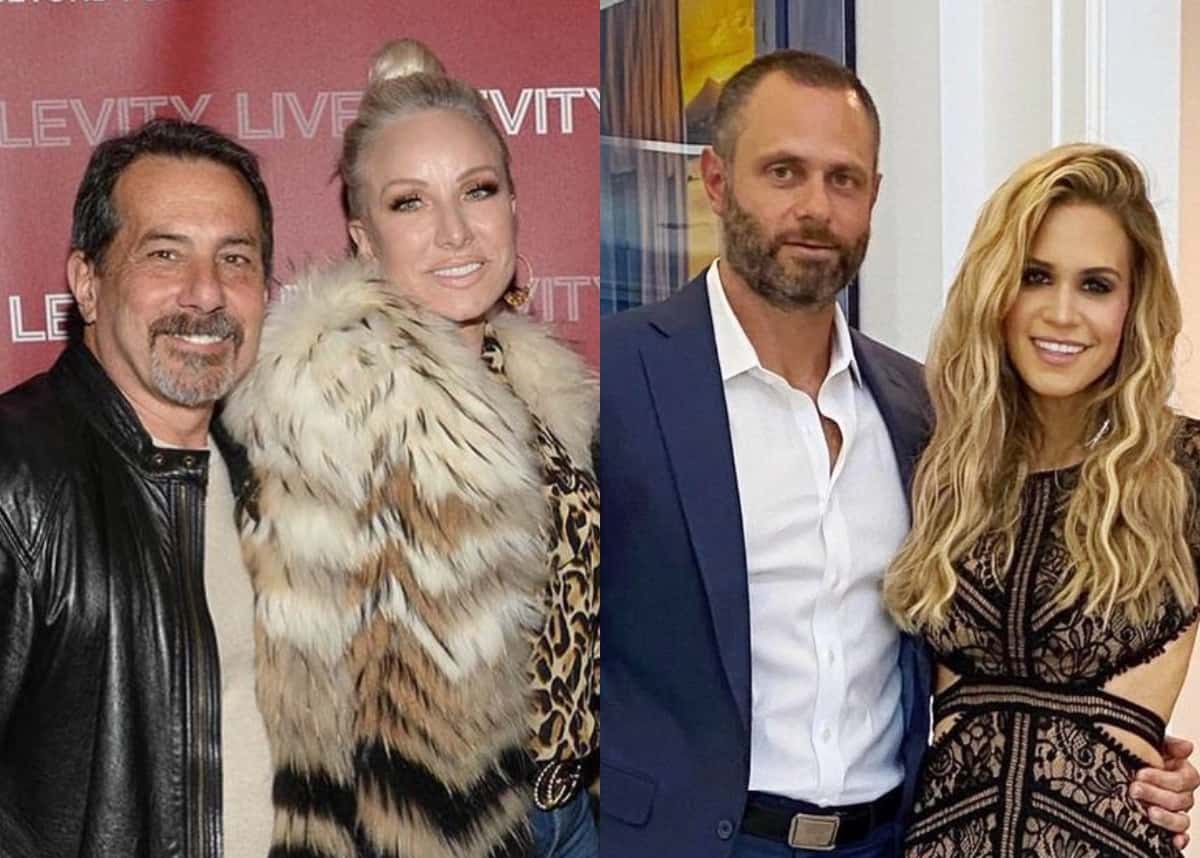 Margaret Josephs is speaking out about the drama surrounding her supposed gossiping in regard to the Evan Goldschneider cheating allegations.

After her husband Joe Benigno was seen telling the husbands of The Real Housewives of New Jersey during Wednesday night’s episode that he had been hearing all about the rumors in his home, Margaret took to Twitter to deny reports of having known about the claims before Evan’s party as Jackie Goldschneider shared a response of her own.

After a fan suggested Margaret owed Teresa Giudice an apology for letting her take the fall for a rumor she potentially shared, Margaret denied any such thing.

“I spread nothing in a public forum, I have a staff in my home that works for my business [and] is part of my everyday life,” she explained. “What was discussed was the allegation was horrible, not true, was made at the party and the sit down that was to take place. I owe no one an apology.” 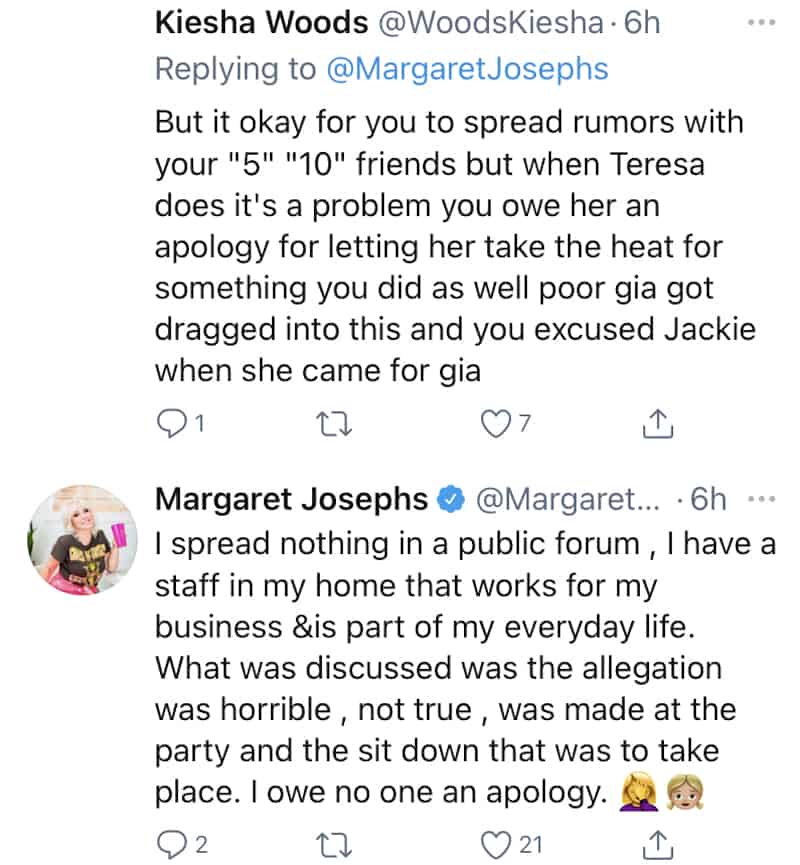 While Margaret told fans that she never repeated the rumor about Evan’s alleged cheating in public, Twitter users continued to call her out, suggesting that she was the first cast member to mention his potential affair.

“If I heard it I would have called Jackie off camera and she would have known and we would have been prepared. The first time I heard it was at Evan’s, and Joe heard it non stop in our house,” Margaret insisted, in part. 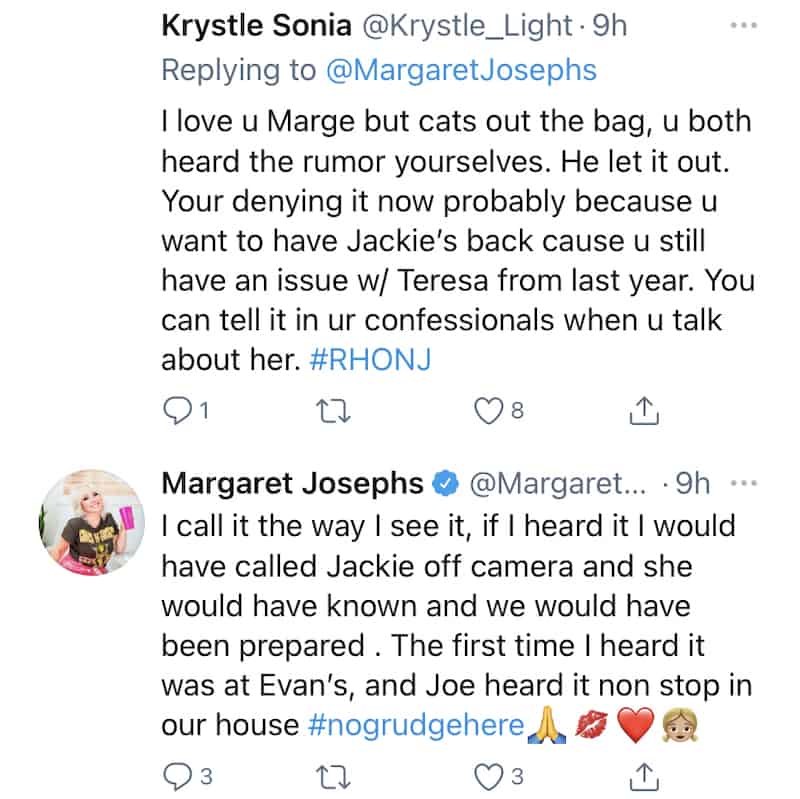 During the premiere episode, Teresa was seen telling just about anyone who would listen that she had heard Evan was doing “stuff” at the gym. Weeks later, buzz began to suggest that Margaret was the original source of the false report.

“[Margaret] wants all the blame to go on [Teresa],” a third fan tweeted. “It’s being said [Margaret] told production the [rumor], she’s not innocent.”

“I think if I told production Teresa would have thrown me under the bus and not came to me with the rumor duh,” Margaret fired back. “These conspiracy theories are as far fetched as Trump won the election.” 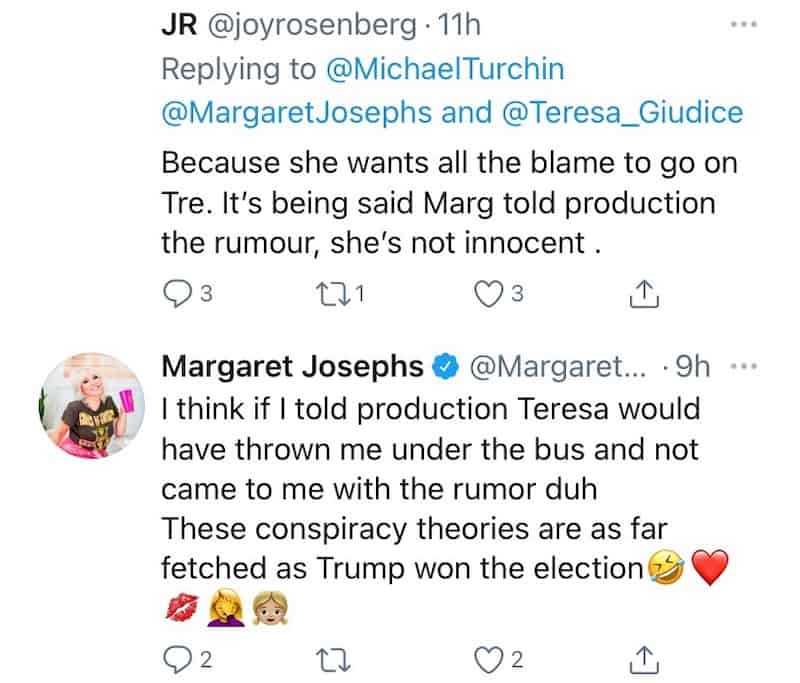 Following Wednesday’s new episode of RHONJ, Jackie got in on the Twitter drama as well when she responded to a photo of the men’s poker night, where the guys of the show discussed the cheating rumors aimed at her husband.

After Gibson Johns described the guys of the show as a “rare breed,” Jackie agreed they are “the best of the best.”

She then re-tweeted a message from Margaret in which Margaret accused Joe of exaggerating and seemingly joked that the rumor surrounding Evan’s alleged extracurricular gym activities was all she and her friends talked about.

“Joe exaggerated,” Margaret explained in the tweet. “It’s [five] women in our house and yes we talk about the cheating rumor non stop since we heard it at Evan’s party.” 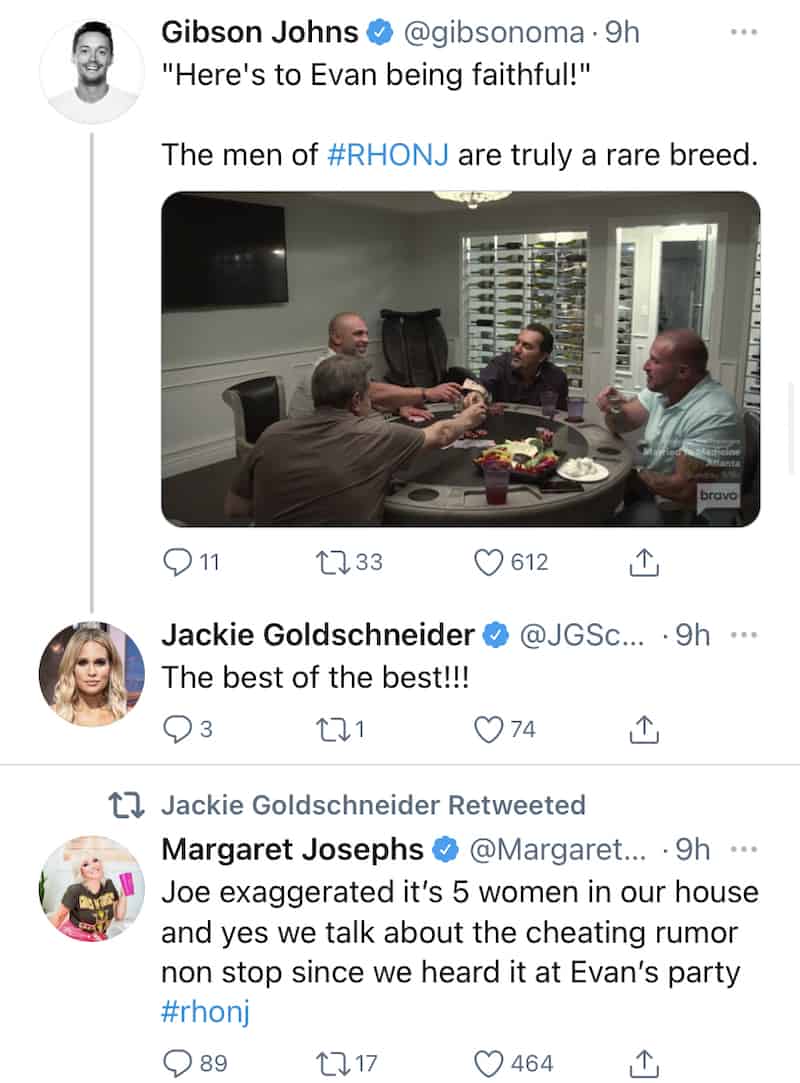