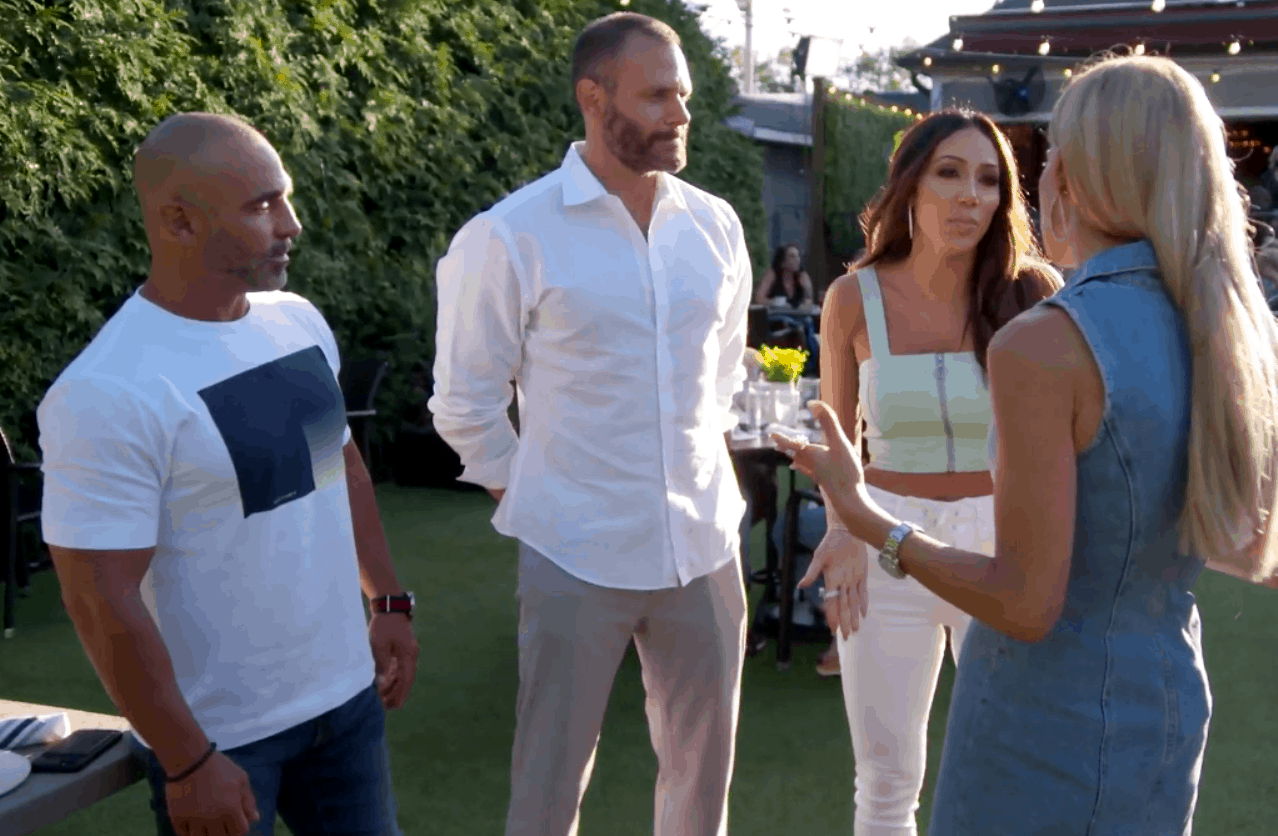 This week on The Real Housewives of New Jersey, we are still in Lake George with our Jersey gals. Melissa gets confronted with rumors about Joe, and Jackie questions her friendships! Let’s dive in!

Dolores calls David and he actually answers the phone. Shocker! She asks him to check on her daughter Gabby who isn’t feeling well. Dolores acts like their relationship works like a freezer — when it is frozen you allow it to defrost, which I assume signifies space. Maybe it is time to order a new freezer, perhaps?

Margaret calls Joe and he talks about their guys’ night. Joe tells her that Evan wasn’t present. He tells her he still hasn’t finished the darn kitchen either. What kind of contractor is he? I must note that he failed to mention the little story he told to the guys about Evan. We hear now that Joe got himself into a little hot water over running his mouth.

Teresa calls Tony — aka the pool guy — to flirt with him. She likes to check out his Instagram photos. The ladies encourage her to partake in that tasty morsel. He claims he hasn’t even been offered a taste yet. Tony will need to lock Audriana up since she calls him a Mommy Stealer. Why would she think that if it is just platonic?

Teresa is “more madder” at Jackie this morning. Gosh, I love how eloquent she is! She can’t let the issue with Jackie go. Teresa shouts out she would have drowned her if she showed up. She must wake up like it’s Groundhog Day and start over with her anger each day. Teresa must have short-term memory issues and no grammar check in that brain of hers.

The ladies head down to the lake and Melissa is the last out of the door. She definitely hasn’t met a mirror she doesn’t like. Teresa and Jennifer decide to go kayaking. Melissa wants to ride around on the huge swan and pose for Instagram photos. Teresa insists that nothing is happening with Tony. She only dated one guy before Joe and now wants a guy who can be lovey-dovey. Dolores wants her to get out of the small dating pond that they are all accustomed to.

Jennifer pulls Melissa aside and decides to talk to her about what Michelle has said about Joe. She shares that Joe didn’t split the “Grow with Gorga” event and owes Michelle’s husband tens of thousands of dollars. Melissa asked if Teresa knows about it. She isn’t angry that Jennifer told her the rumor from Michelle. Jennifer actually did this in an appropriate manner and I am liking her more this season.

Melissa asks Teresa if she knew that Michelle is telling people that Joe Gorga owed her husband money. She tries to get Teresa to defend her own brother. Teresa is being a real hypocrite about this. She claims she doesn’t know much about her brother’s business dealings. Now, that is possible since Teresa obviously didn’t know what her husband did either, and he lived under the same roof as her. Teresa didn’t find out what he was up to until the Feds showed up at their front door.

Melissa calls Joe and tells him what Michelle said. Joe says he had no arrangement like that with him. Joe claims he paid him what was agreed upon. He thinks that he saw it made some money and wanted a bigger piece of the pie. Joe seems really shady and definitely makes you question his business dealings. Hmm, I am curious, who would attend an event such as this, and what is up with that title?

Melissa wants Teresa to do something about it since he is the only living member of her immediate family. She wants her to explain why she always brings these kooks around and befriends them.

Melissa is upset that Joe Giudice can get away with slamming them, and Teresa is quiet as a church mouse. Teresa can only focus on Michelle selling her monstrosity of bad design and can’t be bothered to defend her own brother’s reputation. She wants the number one realtor in Jersey to unload that overpriced piece of real estate.

The ladies watch Dolores kayaking and really looking good — until she wipes out. She looks fabulous, so maybe all of those surgeries were worthwhile? Margaret has chefs coming to cook dinner for everyone. They are going to stay in and enjoy the last night with a catered dinner.

Jackie’s brother Eric and her mom Ann come over to hang out with the kids. She shares that Eric got COVID on a cruise to South America. Jackie was really troubled not being there for him when he got ill on the ship and was stuck on the boat for a month. She seems to genuinely love him and I like seeing her interact with him.

Jackie tells him that she has a friend who told a rumor and it upset her. Her brother wants her to move on and forgive. Eric is such a sweetheart. We could all learn a lot from Eric to just brush it off and move on.

The ladies get all glammed up for dinner, and Jennifer’s necklace is gorgeous but a bit much for a lakeside dinner. The ambiance outside on the lake with the sunset is just gorgeous. They all toast to a lovely girls’ trip.

Margaret shares that she got a book deal. She is writing a story about her background in fashion. Margaret called the first chapter “Raised by Wolves.” She shares that she was approached by her boss back in the day who was 20 years older. Margaret did end up sleeping with him and it sounds like a sexual harassment situation. She obviously doesn’t think of it like that and kind of laughs it off. Jennifer thinks she should keep that out of her book. Margaret wants to transparently tell her story.

Teresa keeps bringing up Jackie. Dolores wants to know if she would have called out Evan if Jackie hadn’t used Gia in her analogy. It appears based upon her reaction that is a resounding no.

Margaret is meeting Jackie at a coffee shop. She tells her everyone missed her on the trip. Jackie thought it was wise to stay home. Margaret tries to defend Teresa by saying that she shared the rumor with everyone but Jackie since SHE personally would want to know. Jackie is really getting annoyed that Margaret is defending someone who encouraged Danielle to yank her ponytail. We now have Danielle weighing in and saying Margaret started the rumor.

Jackie says Evan isn’t doing well and she wants a redo for his birthday. She wants to have everyone that they care about there. I don’t know how that would make things better. Evan might be better off laying low until this rumor blows over.

Michelle comes over to Teresa’s to take photos for the real estate listing. She wants her to remove all of the personal effects. Teresa keeps seeing all of the family memories that occurred in her home. This is sad seeing the old clips of her parents knowing they are now gone.

Teresa asks Michelle about the story she told Jennifer about her brother Joe. She doesn’t want to do business with her until their issue is resolved. I am frankly shocked that she is siding with Joe on this one. Teresa actually did the right thing standing by her brother — this time.

Jennifer is getting ready for the party and Bill calls and can’t make it. Bill got called into emergency surgery. We will miss you, Dr. Bill!

Jackie is talking with Evan about the conversation with Margaret. She is hoping her real friends are the only ones who are attending. Jackie is really protesting too much, and it definitely makes you wonder, if there is any truth to the rumor?

Joe tells Melissa he likes Evan but he doesn’t want to go to a party where his sister is getting bashed. He isn’t going to stand by and keep his mouth shut. Joe doesn’t like that Jackie used Gia’s name in that analogy either.

Melissa and Joe arrive first at the party. Jackie apologizes to Joe and Melissa for the Gia analogy. She shares that Evan has a prominent business in finance and his reputation is everything. Jackie says this week was the lowest she has been in her entire life. Why would a baseless rumor cause you such inner turmoil?

Joe tries to defend Teresa — rather pathetically, I might add. Teresa thought sharing the rumor with everyone but Jackie was done to look out for her. Jackie and Evan think that was a dumb excuse, and Joe acknowledges it was without any merit.

The whole group minus Teresa and Bill are finally together for Evan’s b-day 2.0. I have to say Dolores looks really good even though she again has Frank on her arm. Melissa shows her anniversary bracelet and Margaret thinks it was well-deserved since she gives a good banging. Yeah, we heard, it was all in that awful book that Caveman Joe had published.

Jennifer tries to defend Teresa’s loose lips. Melissa thinks she just can’t take them off of Teresa’s a*shole. Jackie does do a funny toast to the group basically toasting to all of the women who Evan f*cked at the gym. UGH, let’s just move this storyline along!

Next week, Joe confronts Michelle’s husband John, and Jennifer is overserved again. See you all next week, and be well!

DO YOU BELIEVE THAT JOE OWES MONEY TO JOHN? TELL US IN THE COMMENTS!