RHOA Recap: Cynthia Gets Married As Drew And LaToya Almost Come To Blows Over Bolo Rumors 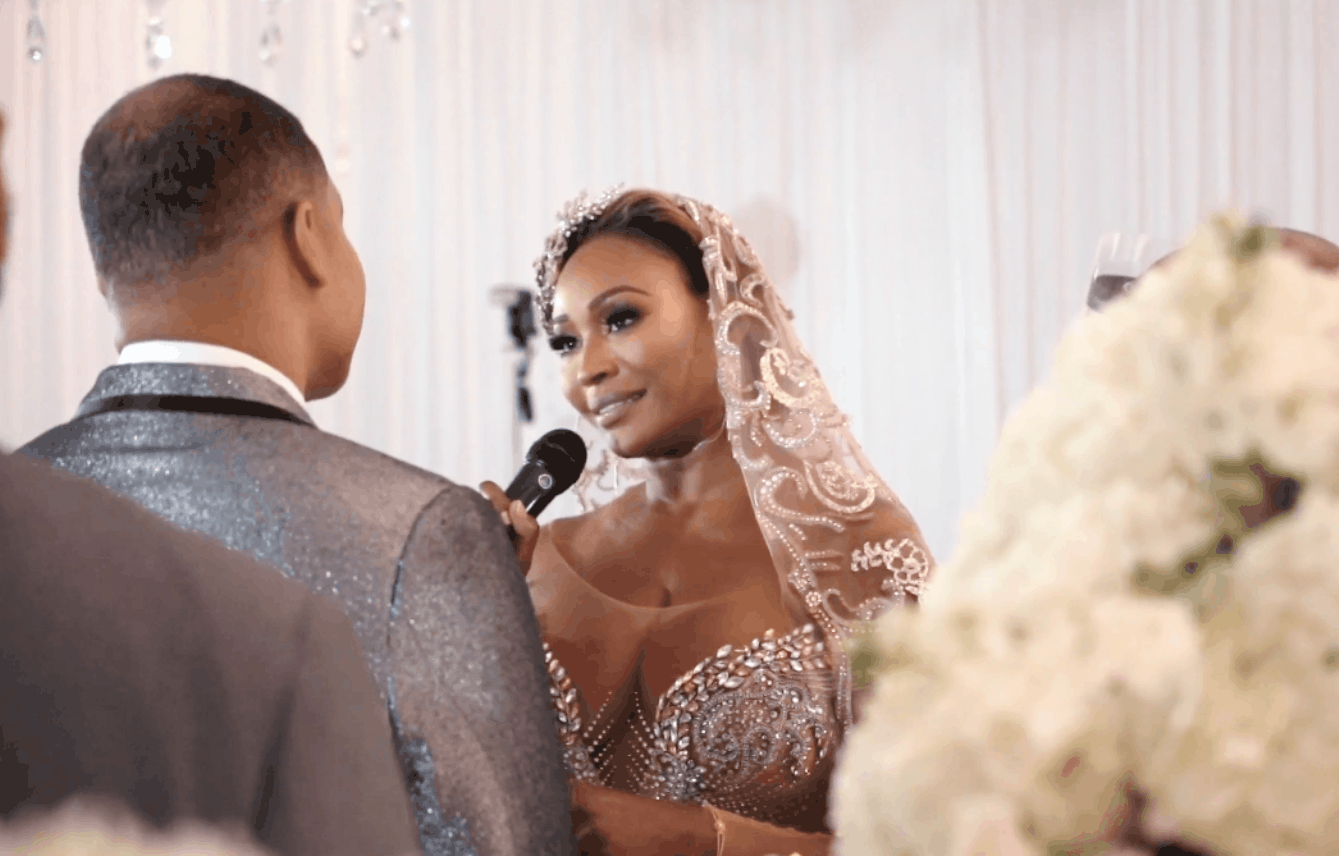 This week on the Real Housewives of Atlanta, we witness the beginning of one relationship and the ending of another. The blogs are still talking and there are some hurt feelings.

We are now one day away from Cynthia becoming Mrs. Mike Hill. Let’s see if she can overcome all of the mishaps with dresses, and on top of that, Mother Nature. Let’s go to the chapel, shall we?

We are now at Cynthia and Mike’s rehearsal dinner and they are serving pizza. I like that they’re having that chill type of food. Eva arrives looking as beautiful as ever. I have to say, I do miss her and that beautiful family of hers.

Cynthia claims that she has made all of the precautions to keep everyone safe during the wedding. She can’t avoid the rainy weather, though. Kenya arrives to show support for Cynthia. She is going to be there for her friend.

Cynthia is wearing a denim jumpsuit and work boots because she feels like she is on attack mode. She is even getting heat from Wendy Williams who is calling her selfish over her super-spreader wedding. Kandi arrives looking all sparkly but with no mask. This is what Cynthia needs to worry about at the wedding.

Kenya is sharing what happened at the party with the group. She spills that Tanya was kissing and touching others. Kenya specifically mentions her lip-locking Porsha. She wants to spill the tea, but Kandi doesn’t want to call people out. Cynthia wants to remain a deaf-mute and gives nothing up. Kenya thinks she is the only one who will tell the truth about who or what went down — literally.

They talk about a lip lock of the nether regions on the coffee table. Kenya thanks Kandi for having her back. In Kenya’s ITM, she defends spilling her tea since there are lots of eyes around and you can’t prevent what is seen. Kenya thinks they would have put it on a billboard if the reverse was true.

Kandi and Kenya talk and they both have different approaches to sharing information. She doesn’t want anyone’s relationships to be in trouble because of what happened there. Kenya doesn’t want her panties down and to be vulnerable. She is going to call in her witnesses if need be, and the first on the witness stand will be Kandi and Marlo.

Drew, Porsha, Marlo, and Shamea decide to have a Night of Nieces. They want to do a “don’t judge me party” and just let these girls have some fun. It is going to be a night in Niece/Nice and a no-judgment zone.

They discuss the wedding. Porsha has some concerns about seeing Dennis. She isn’t happy that Kenya is hashtagging #itwasntme. Kenya is definitely trying to distance herself from the Bolo rumors online.

Marlo doesn’t want any grief over her friendship with Kenya. She said her nephew asked her about the weekend and she had to do some explaining. Porsha thinks Marlo is now the hired help for Kenya and has been relegated to doing the dirty work.

LaToya arrives and she is already ready to party and get down. She takes off her top and flashes her boobs. Drew is feeling her vibe for now. Let’s see how long that lasts.

They decide to play truth or dare with Jenga blocks. LaToya picks truth and says she would smash with Drew. Drew gets down imitating Shamea. Marlo has to go topless with her titties flapping in the wind. LaToya makes fun of the way Porsha walks. She actually does a good job demonstrating her walk.

Porsha thinks that LaToya is coming in with weird energy and is Kenya’s soldier. She does think that LaToya could have spilled the stripper tea and is part of Kenya’s shade and destroy campaign. Drew doesn’t appreciate LaToya’s comments over fooling around with Bolo. She gets fired up and there is a screaming match between these two rival divas.

Drew wants LaToya to keep her name out of her mouth. She doesn’t want to play with LaToya. Drew refuses to take advice from LaToya since her husband is trying to cancel her a*s. She resents LaToya’s implication that she was inappropriate with Bolo.

LaToya is resentful that Drew said she doesn’t honor marriage. She asks, “Do bumping and grinding on a stripper honor and respect your marriage?” Hmm, good point.

Drew gets heated and says, “I have a perfect marriage, perfect hairline, b*tch, and three perfect children.” She doesn’t want LaToya sharing untruths, and she wants her to worry about her own broken relationship.

Production shows some clips where Kenya is talking about the sites that are covering the story. She doesn’t deny B. Scott and TMZ would be ones she MIGHT speak to. Kenya definitely didn’t speak to Page Six — probably because they have been slamming her relationship with Marc.

Porsha doesn’t like how quickly LaToya is sharing Kenya’s personal business. She can’t understand how she stands by Kenya. Porsha has no interest in living in Kenya’s low-rent a*s. She thinks LaToya should be thankful she isn’t a bad b*tch since she has given her lots of intel to spread around. #truth

Cynthia and her mom Barbara talk about her dad not making it to her wedding. He doesn’t want to come due to the pandemic. Barbara is okay with Cynthia now even though they had words over her dad coming to the wedding.

We get to see all of the ladies all glammed up for the wedding. Porsha is super uncomfortable with Dennis coming to the wedding. Dennis put “Single ASFK” on his status. I honestly don’t think anything has changed with his dating status. She looks absolutely gorgeous in her dress but not sure why she is wearing black.

Bravo won’t film the wedding to avoid liability issues. We are relying on Cynthia’s own footage. Drew calls and has lost her voice so she won’t be singing at the wedding. She probably lost her voice screaming at LaToya the previous night.

Cynthia’s dress is absolutely beautiful. The décor is beautiful in the venue and it has been moved indoors due to the inclement weather.

We get to see clips of Cynthia when she was marrying Peter and how everything was so messed up. She was definitely in a different place when she married Peter. Cynthia feels like Mike is at home and she thinks everything is right in her world.

Kenya is happy that Cynthia found love the second time around. Noelle looks beautiful in that picture with Cynthia. We see Gizelle Bryant has made an appearance, and so has our Grande Dame of Potomac, Karen Huger. Claudia Jordan is in attendance too. I LOVE when we see housewife crossovers and some from the past.

Mike looks really handsome and the wedding party is just beautiful. They somehow made it all work despite all of the glitches.

Here comes Cynthia, the gorgeous bride! Production then gives us a glimpse of how they got here. There was also a sweet moment between Cynthia and Noelle on the altar. The camera pans the audience and I see quite a few people with no masks. YIKES, this is what everyone thought would happen.

Mike’s vows seem to be heartfelt. Cynthia is obviously very much in love with him. Porsha congratulates Cynthia. She is willing to show up for her friend even if Dennis is lurking in the shadows trying to lure her back with hot dogs and expensive purses. Porsha will show support no matter if her ex-husband showed up. Now that would be some drama if Kordell strolled in!

We then hear conversations on an open mic with talk about Bolo. Eva’s hot mic with a wedding guest is so crazy. Those hot mics really can get people in trouble but I am all ears right now. There are mentions of carpet munching and big dicks. Eva surmises that, upon seeing Bolo’s member, all of the ladies wanted to partake in it.

Cynthia and Mike are blissfully enjoying their moment and totally unaware of this. They are happily enjoying their first dance as a married couple. Mike, you better be good to her since she has had a rough time in the past with her relationships. Congratulations, Mr. & Mrs. Michael Hill!

Porsha and Dennis meet up for a cocktail. She wants to have a conversation and dinner with him. Porsha wants to address his change in status and clear the air over the stripper rumors. She thinks that he retaliated with his change in status once Kenya spilled all of the Bolo tea in the blogs.

Dennis thinks she is behaving immaturely and is giving him mixed signals. He doesn’t even know why they broke up. Porsha didn’t think he was all in with their relationship. Dennis thinks that when she is pissed at him it affects his relationship with PJ. He asserts her mama gets in the middle and he is sick of being tossed out.

Porsha thinks that the baby is the only thing keeping them together. She thinks they need to just give up and move on. Porsha is just tuckered out over fighting for this relationship. Sometimes you have to know when it is time to go.

Porsha wants them to have better communication. She wants healing from all of the hurtful things that happened. I hope for PJ’s sake that they can do that. We end the episode with one relationship blooming and one fizzling out for good.

Next week, Kenya questions LaToya’s loyalty and Drew is dealing with visitation issues. Have a wonderful week and be safe!

WHAT DID YOU THINK OF THE WEDDING? IS PORSHA REALLY DONE WITH DENNIS? TELL US IN THE COMMENTS!