Home Real Housewives of Dallas News RHOD’s D’Andra Simmons Slams Brandi Redmond For Questioning Her Faith, Shades Kameron Westcott For Being Out Of The Know About Her Finances As Kameron Fires Back

RHOD’s D’Andra Simmons Slams Brandi Redmond For Questioning Her Faith, Shades Kameron Westcott For Being Out Of The Know About Her Finances As Kameron Fires Back 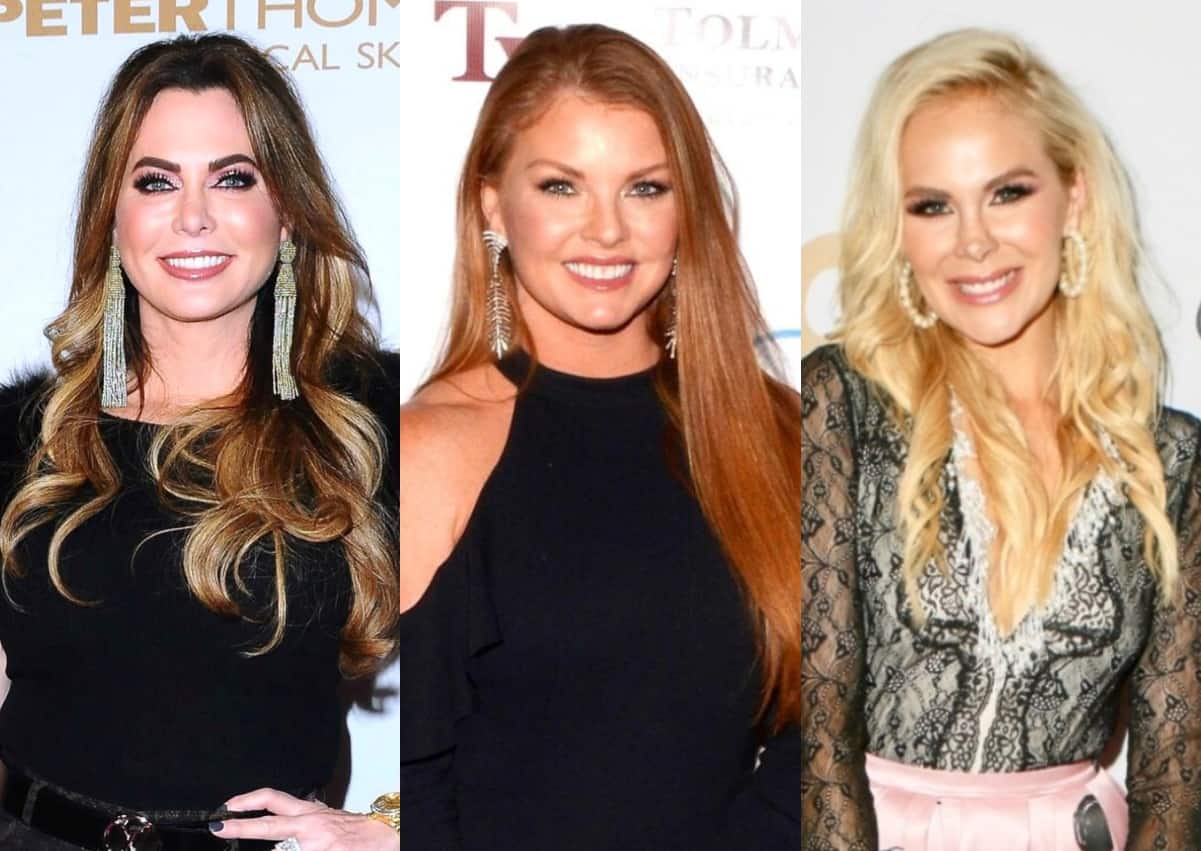 D’Andra Simmons wasn’t happy with Brandi Redmond after the latest episode of The Real Housewives of Dallas featured her castmate raising questions about her Christianity, and she took to Twitter to voice her frustrations.

After responding to a fan who slammed Brandi as “so hypocritical” for her comments, D’Andra admitted she can’t relate to Kameron Westcott‘s lack of awareness about her finances as Kameron clapped back by spotlighting D’Andra’s spending checks from Momma Dee.

“Yes, you were judging me and questioning my faith in God,” D’Andra tweeted on March 23.

Then, when one of her followers responded to her tweet by slamming Brandi for being “so hypocritical,” D’Andra tweeted back with three clapping emoji. 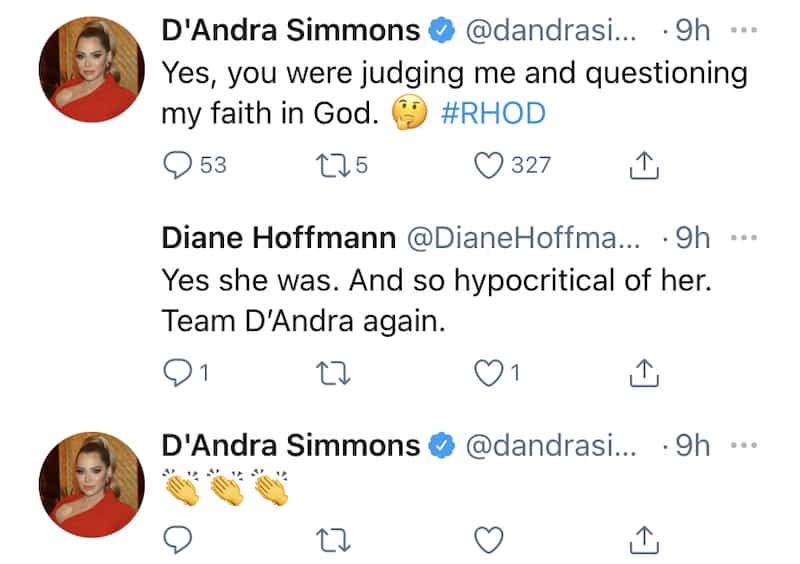 D’Andra then addressed how out of the loop Kameron is when it comes to her family’s finances.

“I can’t relate to Kam not knowing which bills are being mailed to the house! As a businesswoman and someone who takes pride in being financially responsible, I track all of my expenses!” she wrote.

After seeing the tweet, Kameron responded to D’Andra by reminding her of a shopping trip in which she reportedly spent $30,000 and suggesting she wasn’t as responsible as she claims to be.

“I totally understand why you can’t relate…forgot when we went shopping in LA you dropped 30K just on clothes you told me. That’s totally financially responsible right?” Kameron asked.

“I pay my bills, know what I budget, and know what I can spend. Not really seeing your point,” D’Andra replied. 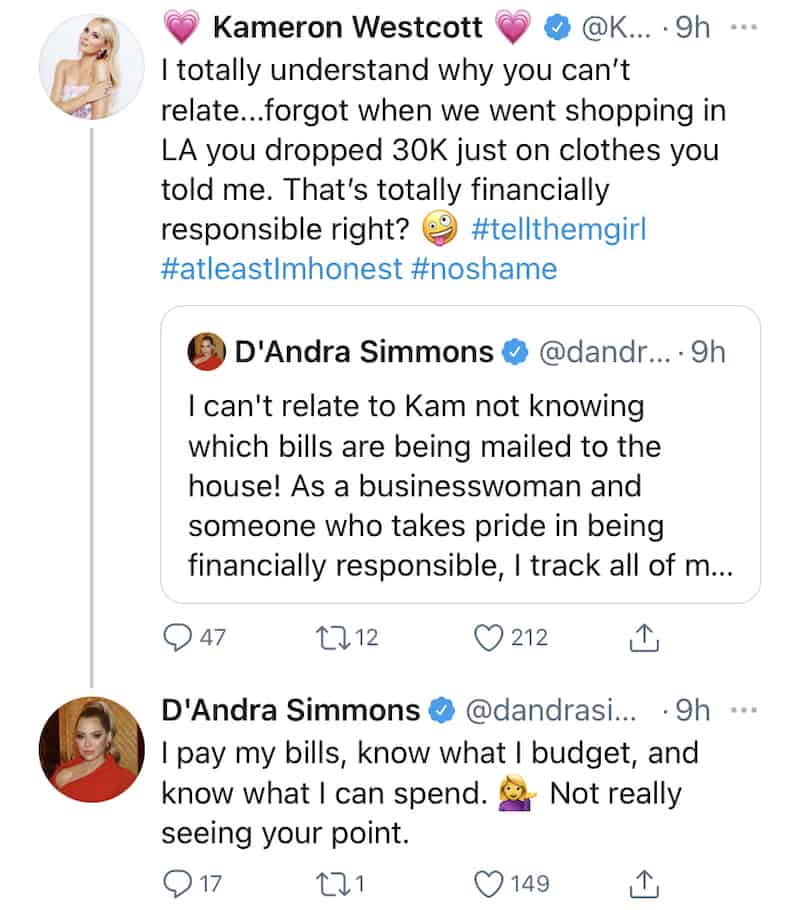 Kameron went on with her tweets against D’Andra by responding to a woman who mentioned that Momma Dee had been paying for D’Andra’s cleaning lady.

“Didn’t she say her mom paid for her cleaning person?” the fan asked.

“Her mom also gave her checks on camera too? I’m just confused?” Kameron agreed, adding the “don’t shame others” hashtag. 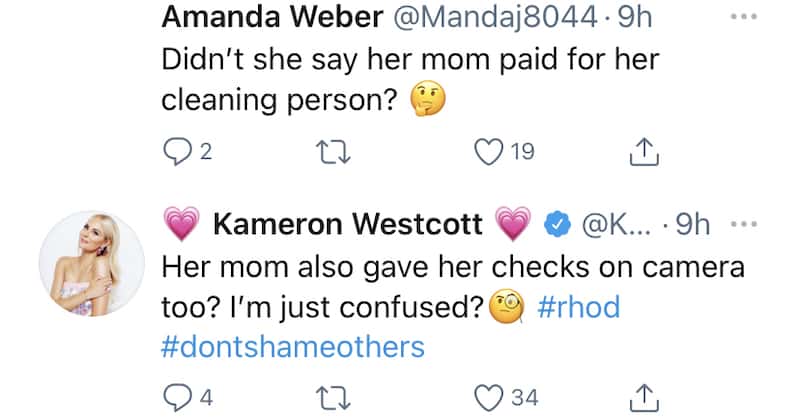