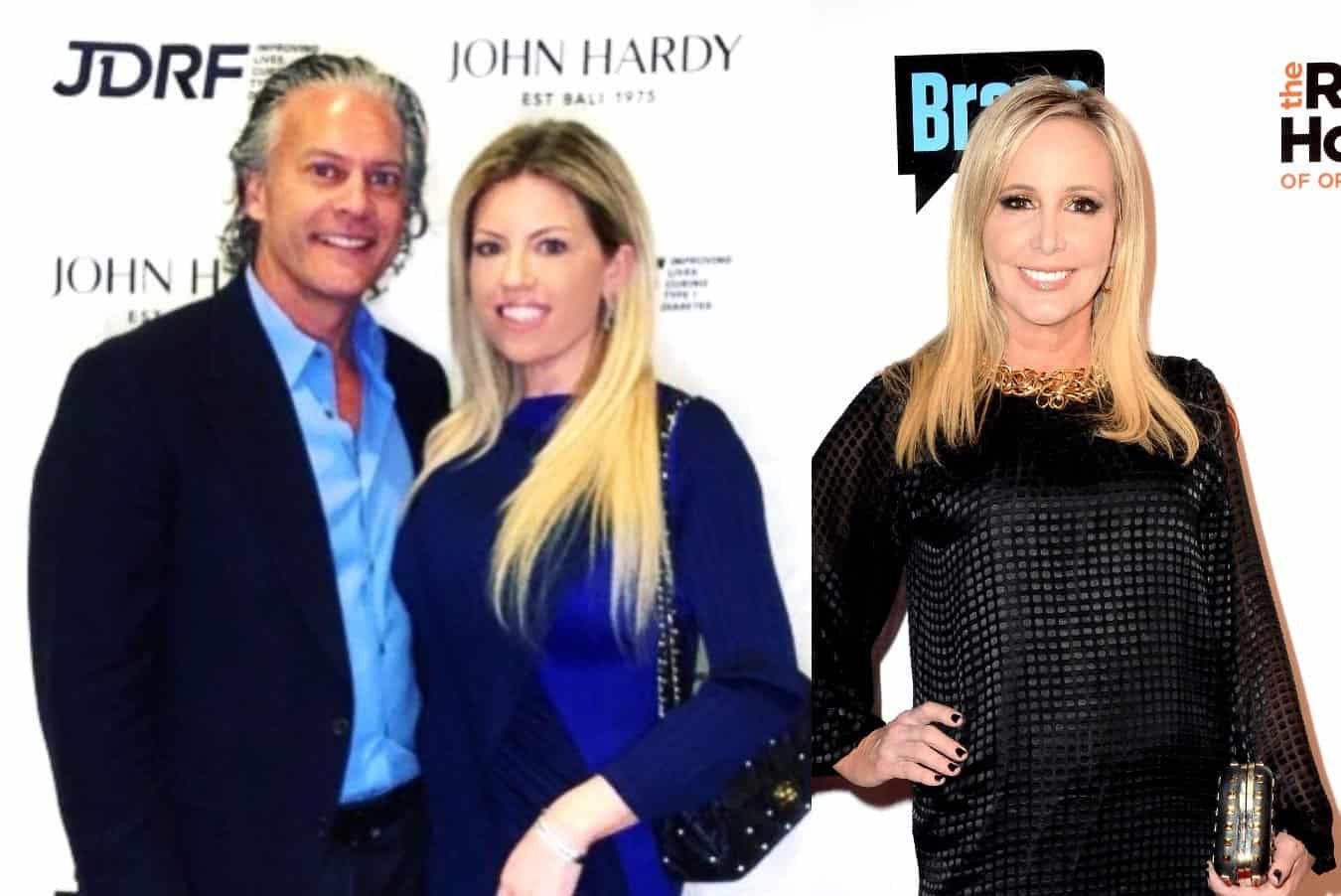 Lesley Cook took to her Instagram Stories to deny the claims made by Shannon Beador on Jeff Lewis‘ SiriusXM radio show earlier this week.

After The Real Housewives of Orange County cast member told Jeff that Lesley had declined a baby gift she sent to her and David Beador after the arrival of their baby girl, Anna, weeks ago, Lesley denied the story completely before returning to her page to share a video of herself opening the package.

“I declined a gift like my husband wrote you a check for $1,400,00.00 like you claimed on an episode,” Lesley wrote, sarcastically, in response to an article about Shannon’s claims. If you did send a gift I’m guessing it was a bunny at this point.”

Was that a Real Housewives of Beverly Hills reference? As fans of the franchise will likely recall, Lisa Rinna offered a stuffed bunny to Kim Richards for her grandson after feuding over comments Kim made about Lisa’s husband and things Lisa had said about Kim’s struggles with substance abuse. However, after initially accepting the gift, Kim ultimately returned it to Lisa at the season seven reunion.

Also, in her caption, Lesley suggested that she knows many “horrible things” about Shannon before accusing her of harassment.

“This seems to be a Lifetime movie in the making. The horrible things I could share about you [and] choose not to. Please stop harassing me on your platforms,” she demanded. 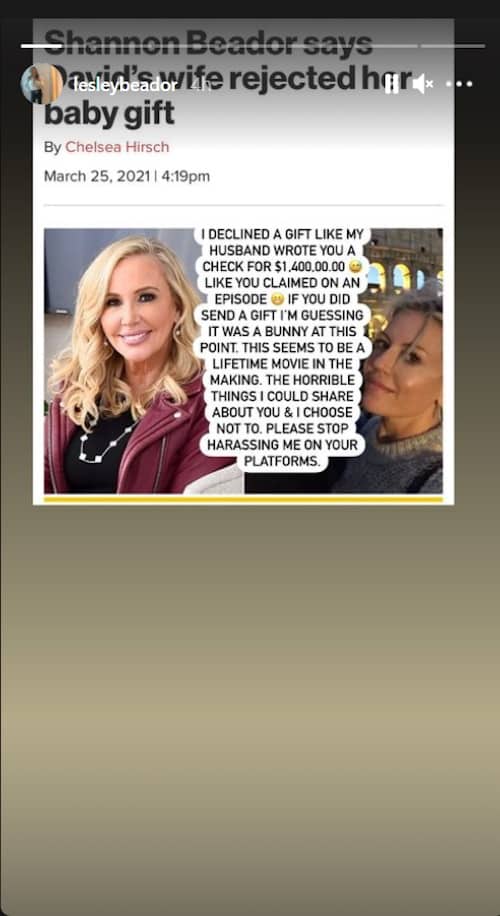 Then, just a couple of hours later, Lesley returned to her IG Stories, where she shared a video of herself opening the gift she denied having.

“Apparently I didn’t decline this gift after all… I need an aspirin,” she added in a caption. 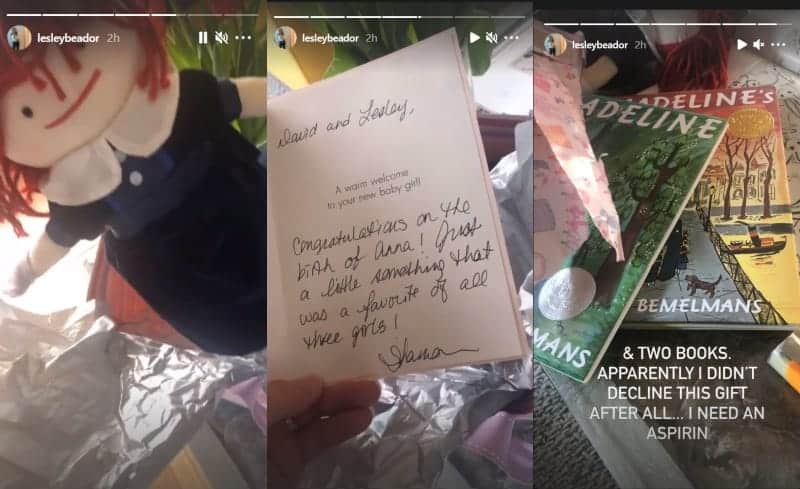 Funny how she found it and opened it after being called out pic.twitter.com/NwTz04ERL7

In another message shared to Lesley’s Stories, she told her followers that while Shannon has spoken numerous times about the gift she gave to her and David, she failed to mention a gift she and David gave to her.

“Funny how we bought her an Apple watch for Christmas and she didn’t share that on her platforms. Unbelievable!!!” Lesley fumed. 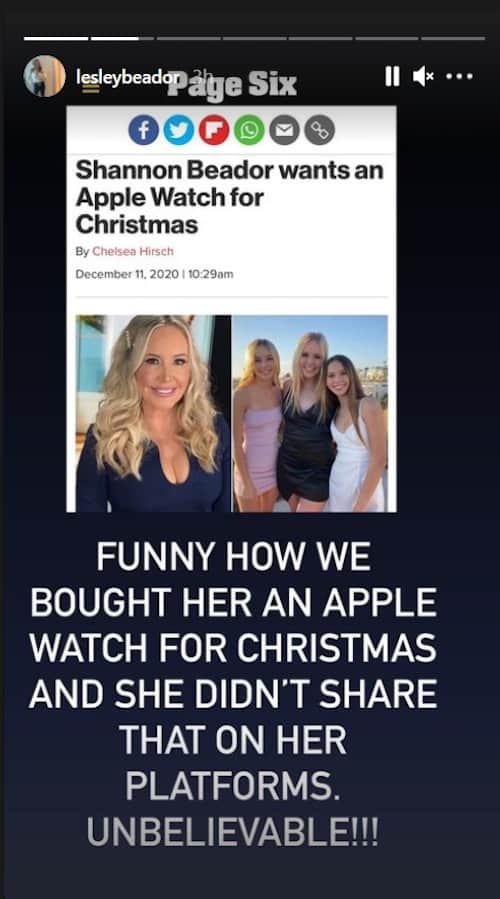 “The girls said, ‘Mom got you a gift.’ And David said, ‘That’s nice.’ And she said, ‘I don’t want it,’” Shannon shared. “So I don’t know. I’ve never met her. You know, that’s another thing. Two and a half years spending half time with my children. Why haven’t we met?”

The Real Housewives of Orange County is on hiatus ahead of season 16.