by Elizabeth May 19, 2021 542 comments
ShareTweetWhatsappPinterestRedditTumblrMailFlipboard 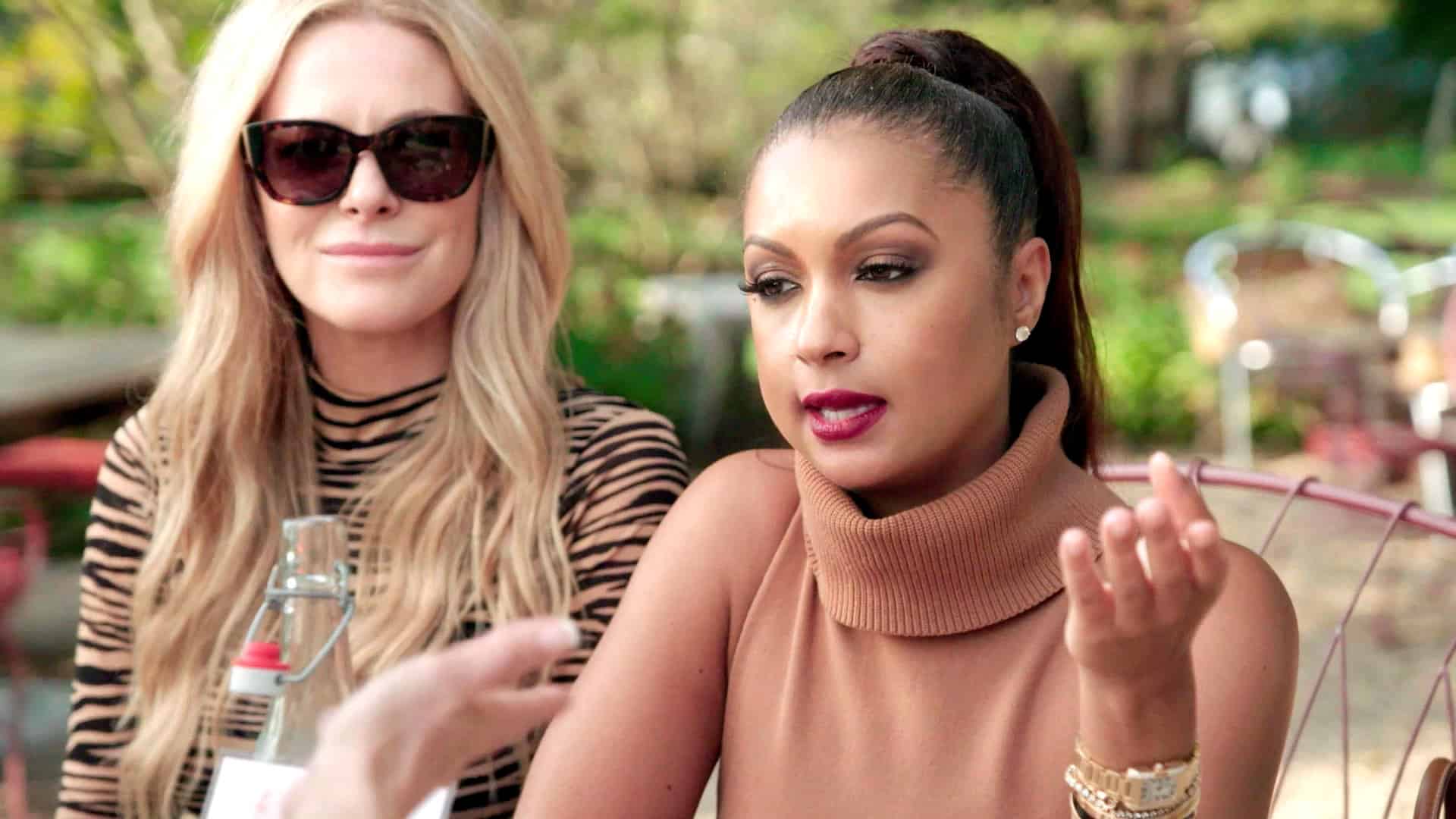 The Real Housewives of New York City are still in the Hamptons. Sonja’s drinking becomes an issue — again. Leah is trying to bring down Heather before she even makes landfall. Let’s watch and observe the attempted takedown, shall we?

Ramona and Sonja are lying in bed together the next morning. Sonja is concerned that Coco isn’t moving. Ramona claims she is in a deep sleep. She couldn’t handle losing her faithful companion, and I was relieved to not see THAT on camera. They both discuss how Eboni was willing to share something so personal about her life. Ramona wants to make sure that she doesn’t feel like the odd man out.

Luann and Eboni discuss her Irish goodbye. Eboni was bothered by how Ramona referred to Michelle as the “help.” She found it offensive, and it triggered her because she has a grandma that was a domestic. Eboni is going to talk directly to Ramona and explain why this bothered her. Production shows countless examples of Ramona forgetting people’s names or being rude to staff, dates, servants (UGH, one of the worst), etc.

Leah is wearing some crazy ensemble of mismatched animal print with high heels to trek around at a winery. Ramona wants to be the fashion police, and she feels Leah overdid it with prints. She prefers that Leah wear just a simple T-shirt and not resemble Tarzan. Leah thinks being around this group is akin to an observation safari and she has dressed for the occasion.

Luann gets on the bus and introduces herself as Luann to the driver. Sonja is impressed that Luann has finally gotten off her throne and stopped making people address her as the Countess. She will always be the Countess to me.

Luann is having Garth come over to work out their kinks and lube up her joints. She has found him to be very useful during the shutdown since he helps her cook and alleviates stress. Garth serves another purpose by stopping her from watching Tom’s terrace and stalking him at the Regency. Production shows countless clips of Luann making her life all about Garth. I will take Garth over Tom any day of the week!

Leah shares that she got a d*ck pic from some random dude. It is not something the other ladies are interested in. Luann isn’t into guys sending those and she doesn’t partake in it. Eboni laughingly says, “She doesn’t even send face pics either!” LOL.

The ladies arrive at the Croteaux Winery, and they will be doing a rosé wine tasting. Luann leaves the table to get her faux rosé. Leah thinks Luann drinking out of a wine glass is a pathway into drinking again. She is already questioning if this will be an issue for her. Sonja thinks Luann looks like she is wearing Marley. Now that is funny!

Eboni brings up to Ramona how she appreciated her remembering their server’s name. She found the help comment triggering because of her grandma’s past as a domestic. Ramona explains that she doesn’t view it that way and it is just her choice of words. She is happy that Eboni explained how this can be offensive without being condescending.

Eboni doesn’t like anyone to feel devalued. Ramona toasts and starts calling them hospitality assistants. Side note: Do you all think that Eboni signed up for this show to educate this group of women on how to be culturally sensitive? If so, she has her hands full with the apologizer!

Ramona starts discussing having COVID. She found out she was positive while staying at the Boca Beach Resort with Mario and Avery. I love how she gives a little shout-out to her influencer dollars. Leah questions if Ramona actually donated blood plasma. Ramona is playing dodgeball with the plasma question. She won’t own up to lying about it. Ramona probably got tested, and she possibly had the antibodies and didn’t donate plasma. She gave her official statement to the press and the matter is closed to her.

Leah thinks that Ramona was trying to change the perception of her super-spreader behavior during the pandemic. She thinks she was impersonating a charitable person. Sonja wants her to come clean, apologize for lying, and admit there wasn’t a “big a*s bag” full of blood. Ramona starts spitting food and storms away from Officer Leah of the COVID police task force. She thinks she is a vicious girl and doesn’t want to be scolded by her.

Leah is annoyed that the other ladies didn’t go in on Ramona. Eboni didn’t like her methods and didn’t want to address the issue like Leah did. She thinks it is morally bankrupt not to be honest, but she thinks Ramona is actually embarrassed.

Luann goes to find Ramona, who is in the bathroom. Leah gave Ramona diarrhea over how she attacked her. Ramona is stinking up the place with her Pinot-infused fumes while the poor cashier is having to breathe them.

Sonja decides to walk away with Ramona to discuss what happened with Leah. She thinks Leah needs to get off her soapbox and stop lecturing the HBIC duo. Sonja seems to be concerned about being canceled if you aren’t being authentic.

Eboni is happy the air has been cleared — except the bathroom, which is still toxic. Ramona decides to practice her healing skills by screaming her frustration out. Sonja gets complimented by a man with a huge bald spot who says she has a great body. She sure loves getting male attention and has paid good money for it.

Eboni is pleased that she can have a constructive conversation with Ramona. She is being cautiously optimistic about their friendship moving forward. Eboni and Sonja bond over not being wasteful of booze and shellfish. Eboni is going to cram that crustacean in her Birkin. She has a kindred spirit in Sonja.

Sonja is really tipsy in the van heading out to shop. She admires Eboni’s arm cleavage. Eboni is getting a taste of drunk Sonja, and she keeps mentioning Garth. Ramona thinks that she is jealous of Luann having a guy. She is probably right on with that.

The ladies decide to go shopping in Greenport at a little boutique. Ramona mentions how Leah is getting her all stirred up over inviting Heather. Ramona purchases sage so they can purify the house before Heather arrives.

Eboni shares that she used to be a Hooters girl. She is being a good sport sharing that she has shucked some oysters in her past. Eboni is being real with this group and I am liking her thus far.

Luann tries to placate Sonja by buying her something since she sees her spiraling. Sonja mumbles that she hates Garth and hangs on Luann. Leah thinks she wants to have Garth and Luann as a package deal. She is right, and I hate that I have to agree with Leah on anything.

Sonja, of course, heads straight to the bar. The bar is opened privately to them. Sonja thinks that drinking rosé is being sensitive to the non-drinkers. Sonja randomly mentions that she finds big d*cks to be a nuisance. At her age, she thinks that is just too much to navigate. Sorry, sometimes there are just no words to describe Sonja #speechless.

Eboni is enjoying Sonja’s playful spirit. She has to mention that she isn’t used to hanging out with all of these white women.

Luann leaves the table to have a cigarette. She might want to light up a joint if she needs to decompress with this group. Leah joins her to judge Luann’s choice of drinking out of a wine glass. She wants her to understand that she is one step away from drinking again. Leah, with her annoying pitchy voice, has no business telling Luann how to stay sober. Luann is one of the few ladies in this group that can drink and fall in the bushes and still be coherent. Leah, with her mocktail, is being really judgmental about this and that is not cool.

Sonja doesn’t want to be “cancel consolation.” She is so trashed she doesn’t even know the correct term. Eboni explains cancel culture and doesn’t think Sonja has anything to worry about since she is Bravo gold with her antics. Ramona doesn’t understand how you cancel culture. She is worried that Sonja is venturing into the danger zone with her drinking.

Leah decides to read comments that Heather has made about the ladies. She is really stirring the pot to muddy the waters before Heather shows up. Leah definitely had a job to do this season, and it was to poison the friendship pool before Heather dives into this hot mess.

Leah gleefully reads that Heather called Luann a drug user and isn’t authentic. Heather prefers Sonja’s face prior to the facelift. Leah is really enjoying that she has riled these ladies up and they are gunning for Heather now. She SHOULD be more concerned about what Heather has said about her aggressive self. When did Miss Leah become the judge, jury, and executioner?

Luann decides to FaceTime Garth and she is gaga over this guy. Eboni feels like Alice in Wonderland with this crazy group. She is correct since she is living in a fantasy world with this peculiar group of women. Side note: You can tell that Eboni isn’t quite used to the cameras since she has a big mouthful of food in her mouth when they zoom in on her.

Sonja decides to call William so she can flirt and get some validation. She wants them to understand that the homeless is going be “homeless-ler.” William, aka Diversity rep for JPM, is a supplier of diversity?

Sonja is just rambling on about her cause and is making zero sense. She has allegedly raised millions for her charities. Sonja calls William again and she wants the other ladies to shut the f*ck up. William wants to know if she is okay. Eboni decides to grab the phone and asks about Chase’s mortgage rates. Ramona mentions that Wells Fargo has better rates. Sonja loses her sh*t over her mentioning Chase’s competition. We now have a to-be-continued…

Next week, Luann is in tears over seeing Sonja losing it. Heather arrives to face the housewife wrath. Leah is going to take a vow of silence?