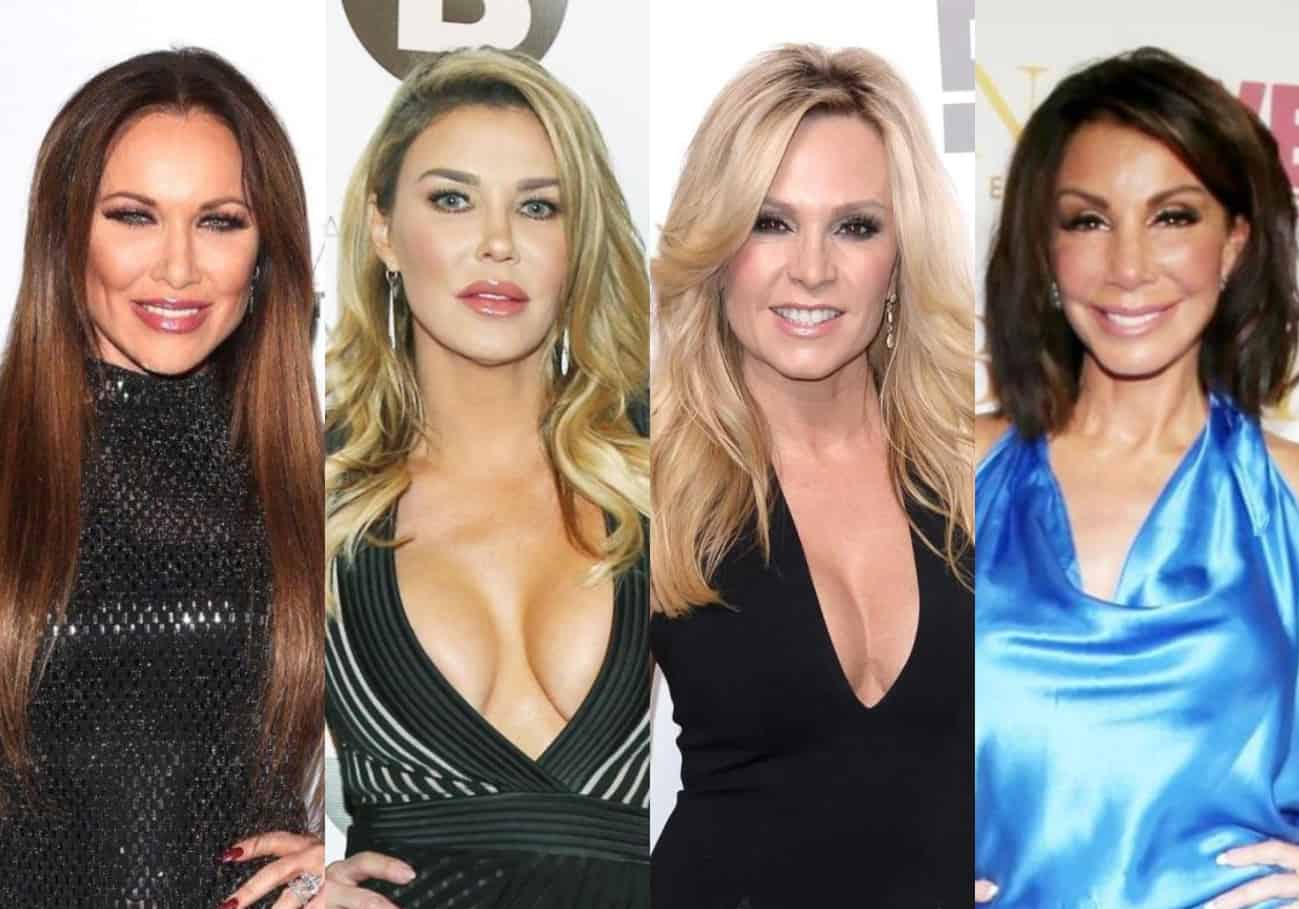 Hellooooo, Blurbers! If this is your first time tuning in, welcome to Reality Blurb’s Open Post, a little old place where we bring you the light fluff, and also give you a forum to talk about whatever you want! This includes shows we don’t normally cover on here, and it’s also a space to have fun and socialize, so if you’re itching for a fight, GET OUT. If you’re itching to have a good time, please come on in!

If you have any suggestions for topics (and as I mentioned last week, I sure need some!), please send them to ashlee@realityblurb.com. Per reader Ronnie’s request, this week, we’re going to channel the dark forces and give you the… Top Ten Biggest Real Housewives Villains!

When I watched old Disney movies as a kid, I always found the villains to be the most intriguing characters in the stories. My favorite is Ursula from The Little Mermaid. Followed by Maleficent in Sleeping Beauty. And the evil queen from Snow White was intense. Those were some bad bitches that stirred up trouble just for the fun of it, which went against everything my parents taught me (except when my mom was feeling petty about the neighbors).

But how do we feel about villains in the real world? Most of the time, when I come across a salty asshole, I think to myself, “FFS, get over yourself.” But I, MYSELF, am a salty asshole, so… maybe I have some lessons to learn. Regardless! Villains of Housewives are a category unto their own, so let’s get to it! Here we go, in no particular order.

LeeAnne Locken of RHOD – I’m starting off with a lighter entry, and things will get more intense as we go down the list. LeeAnne was infamously fired for hurling ethnic slurs at Kary Brittingham during season four, but before that, she was just a regular ol’ carnie from Texas that liked boning between holes in the fence and dancing at weddings without any food. Some would call her the lifeforce of Real Housewives of Dallas, and after the disappointing last season, I tend to agree. Should she come back? Hell, I don’t know. But what made her a compelling villain was her bullhorn dance of death she did to intimidate Brandi Redmond when things got heated up at Stephanie Hollman’s Frat Party.

Phaedra Parks of RHOA – Ooh, chile. There never was a Housewife that threw shade like Phaedra, and what made her shade so special was her honey-thick delivery. Sometimes I miss the old days of Phaedra, but then I remember why she was fired. I guess spreading a *little* rumor about Kandi Burruss and Todd Tucker conniving to lure a drugged Porsha Williams into their sex dungeon was a bridge too far for literally everyone on the planet.

Danielle Staub of RHONJ – Oh, Beverly. Now, some may look at her as a victim in the game of life, but when you really break it down, you’ll remember that she a) slowly drove by Dina Manzo’s house (with her kids in tow, no less) to spy on her, b) brought her goons to a cancer charity at the Brownstone without an invitation, and c) dragged Margaret Josephs across a store by her ponytail and laughed maniacally about it. Danielle’s intense energy reverberates wherever she goes, and whenever she’d pop back as a “friend-of” on Real Housewives of New Jersey, all hell would break loose.

Swamp Creature of RHOBH – Must I name her? Okay, fine, but I’M NOT HAPPY ABOUT IT. When Brandi Glanville entered the stage on season two of Real Housewives of Beverly Hills, we didn’t get a chance to understand what a nutcase we were dealing with because of Kyle Richards’ mean girl ways. As the seasons went on… well, then we got a REALLY GOOD sense of what Brandi is all about. She barks, she drools, she claws… she sleeps above her covers… three FEET above the covers, and when she’s not busy being the Gatekeeper at the gates of hell (don’t flatter yourself Brandi; I’m not actually comparing you to Sigourney Weaver), she would throw drinks at her castmates, spread rumors in her disturbing baby talk voice, and was racist AF towards Joyce Giraud.

Kelly Dodd of RHOC – There’s a lot of back and forth over what happened with Heather Dubrow’s departure from Real Housewives of Orange County. Was she fired? Did she leave because of personal differences she had with a producer? DID ANY OF THIS HAVE TO DO WITH KELLY DODD? On that last part, I suspect at least a little, because on season 11, Heather was absolutely scandalized by Kelly’s low digs at the other women. (Remember when Kelly called Shannon Beador a ‘c**t’, or when she called Tamra Judge a ‘f***ing idiot?) Kelly’s tenure on the show has been rife with conflict. If you’re a sentient being encased in flesh, odds are Kelly will pick a fight with you whether cameras are around or not. Safety tip: if you’re attending BravoCon this year, DO NOT wear a gong on your head.

Candiace Dillard Bassett of RHOP – Bravo needs to keep this woman away from butter knives. And cheese knives. Because while she may not cut you, she’ll wave that little knife around in your face like she’s a greaser from The Outsiders, and call you a ‘zoo animal’ or ‘bed wench’. Candiace strikes me as the type of person that can’t function without drama. She’s the very definition of ‘hurt people hurt people’ and ‘own worst enemy’, and everything she says is pretty much hardwired to gut everyone in her path.

Aviva Drescher of RHONY – Where do we begin with this one? I guess we’ll start with when Aviva single-white-femaled Carole Radziwill, and after being mocked by Razzie over her copycatism, spread a rumor that Carole’s book What Remains was ghostwritten. Then, there was that time Aviva called Sonja Morgan and Ramona Singer “white trash” because they didn’t pay her enough respect for flying on an airplane. I’m not even going to get into Aviva’s perverted father. So let’s end it with Aviva waving around her medical records and throwing her prosthetic leg at Heather Thomson.

(Fun fact: I previously had Jill Zarin in this spot on the list, but I woke up in the middle of the night and shrieked, “AVIVA!” That was a close call, folks.)

Kenya Moore of RHOA – Kenya, given allllll we’ve seen of her antics on Real Housewives of Atlanta over the years, really could be at the top of the list when you think about it. She openly flirted with Apollo Nida right in front of his wife, Phaedra Parks. She insinuated that her ex- (and possibly paid?) boyfriends were either gay or abusive after they broke up. She chased TOOTIE (aka Kim Fields) off the show after only one season! And the pièce de résistance was when she joyfully ate crab cakes in front of a starving group of women on the cast trip she was hosting! I know some readers on here think Kenya gets blamed too much, and I think that’s fair to a degree. But damn, she sure doesn’t make it easy to root for her.

Lisa Rinna of RHOBH – Even though this list isn’t in definitive order, I put Rinna second to last just to piss her off. HA HA. It’s been clear since season six of Real Housewives of Beverly Hills that she’s doubled down on the whole concept of being a reality show villain. That’d be fine if Lisa were on Survivor, but in a show that’s purportedly about the lifestyles of the uber-wealthy, Lisa has transformed RHOBH into a fake, dark soap opera. I thought her lowest point was rallying the troops to gang up on a grieving Lisa Vanderpump over #puppygate… I mean, those pill pants and the tweet making fun of Lisa’s brother’s death were atrocious. But! As it turns out, she pulled a “hold my beer” in season 10, and hounded her friend of 20 years, Denise Richards, over whether she had an affair with Swamp Creature. So that makes TWO highly popular cast members that were chased off the show because of Rinna’s toxic behavior. Mission accomplished, Lisa!

Tamra Judge of RHOC – Must I explain why “Naked Wasted” Judge is in this slot? I have never seen a Housewife more duplicitous than TamTam, and THAT is one helluva declaration to make. Despite her syrupy-sweet voice and, um, relationship with God, Tamra had her fingerprints all over every bit of gossip that went around the OC, and whenever she was called on it, she’d pull the old, “LOOK OVER THERE!” I know it’s been many years, and we’ve discussed it many times, but that moment when she leaned in and whispered to Vicki Gunvalson, “Let’s get her naked wasted,” about Gretchen Rossi, shivers ran down my spine. Shivers STILL run down my spine! It was that bad.

Did I miss anybody?

TELL US – Who do you think is the biggest villain on all of Housewives? What shows are you watching these days?