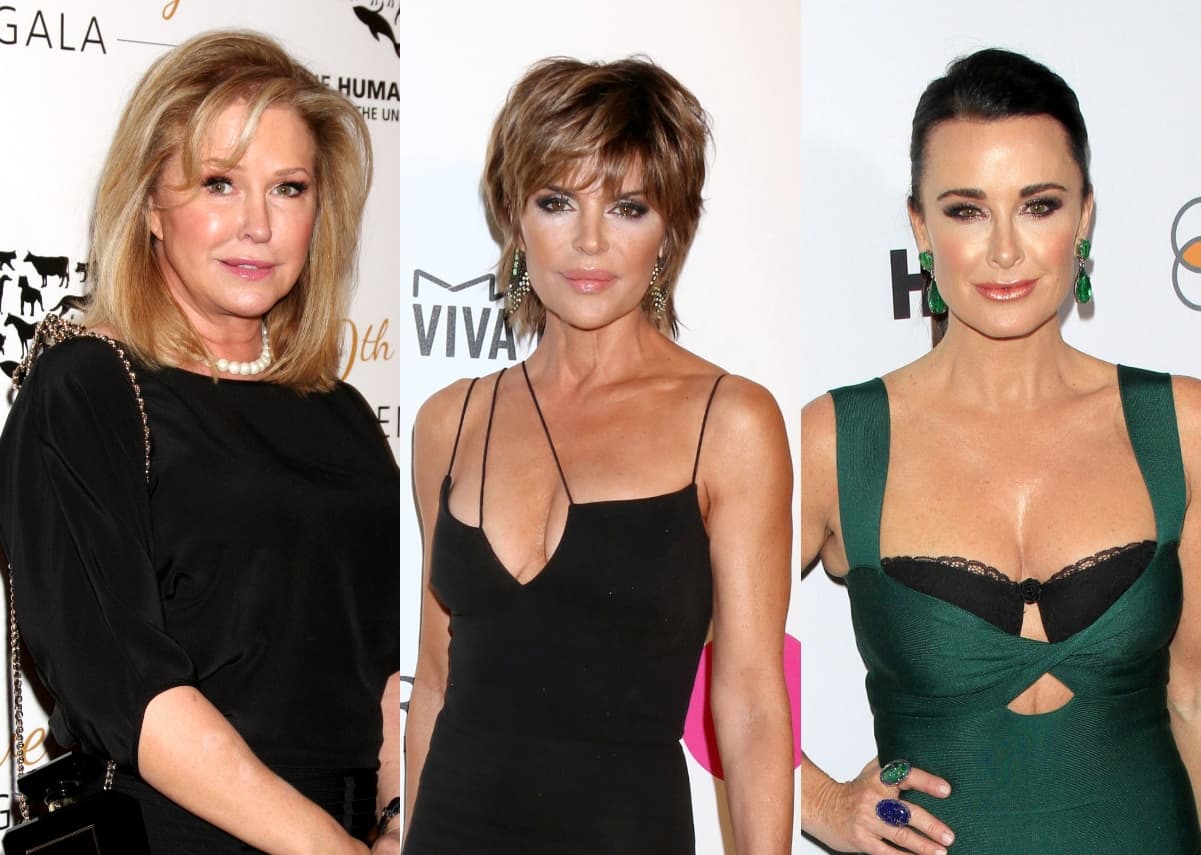 Kathy Hilton hints at a “really crazy” moment on season 11 as Lisa Rinna explains her wild Instagram videos and Kyle Richards reveals why she feels safe with the current cast.

While celebrating the new season of Real Housewives of Beverly Hills, the ladies sat down with Kathy’s daughter, Paris Hilton, for her podcast and dished on a wide array of topics. First, Kathy revealed the moment from the show that made her cry.

“One of my favorite parts – and you made me cry – was when you [Lisa] apologized to Garcelle [Beauvais], and you were sitting at a restaurant,” she said on the latest episode of the This Is Paris podcast. “I did… I teared up. I teared up. I really did.”

But later in the podcast, Paris asked the ladies to discuss the craziest moment from the season. Though they couldn’t reveal too much, Dorit Kemsley teased that it involved Erika Jayne as Kathy weighed in, stating she was shocked by something that was caught on camera while the ladies were filming in Lake Tahoe.

“There’s one thing that was really crazy, and I asked this person, ‘Aren’t you gonna see what you can do to get this cut out“‘ They’re like, ‘No, we don’t do that Kathy.'”

Though she didn’t elaborate, Kathy was then heard discussing the incident with her fellow cast members, saying, “You know.”

After lightly touching on some of the heavy moments, Paris shared that she’s “obsessed” with Lisa’s Instagram videos and asked the actress how she learned to use the platform so well.

“I don’t think it’s a learned thing,” Lisa explained. “I think that for me, Instagram became a way for me to express myself, and for some reason, I don’t think too much about how I’m gonna look [or] what people are gonna think. Obviously, because if I did, I would never do the sh*t that I do, right? I wouldn’t! And it became a very freeing thing for me, and it seemed to bring joy. It brought joy to me to do it, and it seems to bring joy to people, so I just kept doing it.”

As for whether Lisa’s two model daughters are embarrassed by the videos, Lisa admits they’re a bit “horrified.”

“At first, my kids were slightly horrified. Not full-blown horrified, just slightly,” she shared. “And I think that they just got used to it, and they got a kick out of it. I mean, whose mom does that?”

She added, “I mean, I’m sure they’re horrified, but what are you gonna do?”

Since Lisa has been in show business for so many years, Paris also asked the star to name the craziest rumor she’s ever heard about herself. Lisa then acknowledged the infamous rumor about her husband of 24 years, Harry Hamlin.

It was apparent that the ladies – minus Garcelle, Erika, and Sutton Stracke –  were truly enjoying each other’s company during the podcast as they all laughed loudly throughout. And Kyle explained that she feels safer than ever around her co-stars since she no longer has to live in fear of someone trying to take her down behind the scenes.

“It wasn’t always like this, just to be clear,” she said before noting that Krystal Kung Minkoff joined the show during a less toxic time. “It wasn’t always like this. There were many seasons where you had to watch your back – many, many, many, many – even when you felt like people were your friends, you had to watch your back. And it’s very different now, there’s a [feeling of] safety.”

Though Kyle didn’t name any names, it’s fairly evident she was referring to Lisa Vanderpump, who she’s been publicly feuding with over the last several weeks.

Paris then chimed in with a bit of shade of her own, stating, “I’ve seen some people on the show who are like vicious, and weird, and jealous.”