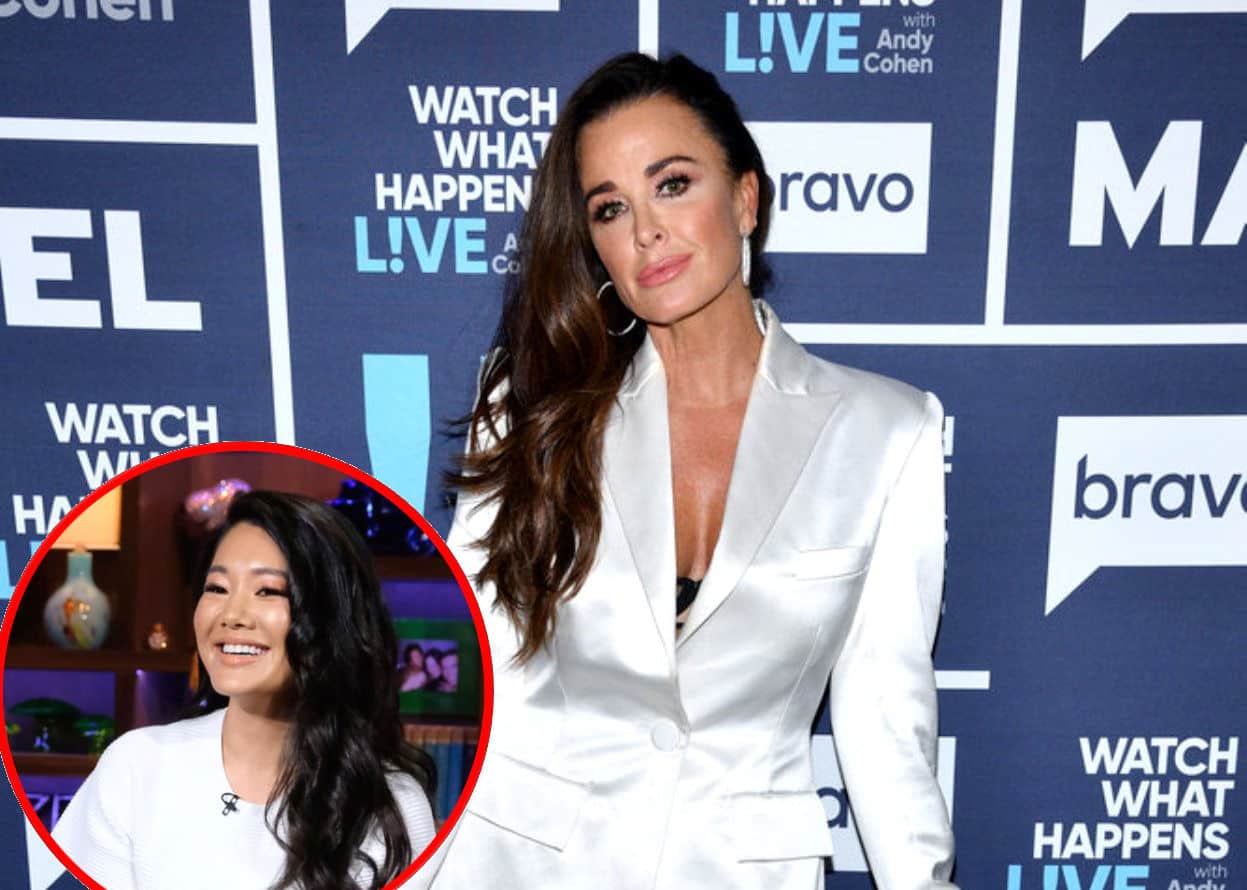 Kyle Richards posted a bikini photo on Instagram on Thursday that quickly got the attention of her fans and followers.

As she and her Real Housewives of Beverly Hills castmate, Crystal Kung-Minkoff, attempted to get the attention of rapper Drake after learning he follows their co-star, Lisa Rinna, Kyle was met with plastic surgery allegations.

“Like my hat? #thirstythursday [Drake] I’m upping my game cc [Lisa Rinna],” Kyle wrote in the caption of her July 22 post.

“Stop doing this ab machine at the plastic surgeon… Like just do some crunches [it’ll] look better,” one person wrote in response to the pic.

“I did do Em sculpt … [three] times. Not at a plastic surgeon office at [Nurse Jamiela] helps tighten your muscles but you must do ab work of course,” Kyle replied.

Then, after another person called her out for a tummy tuck, Kyle confirmed, “I did NOT have one.” 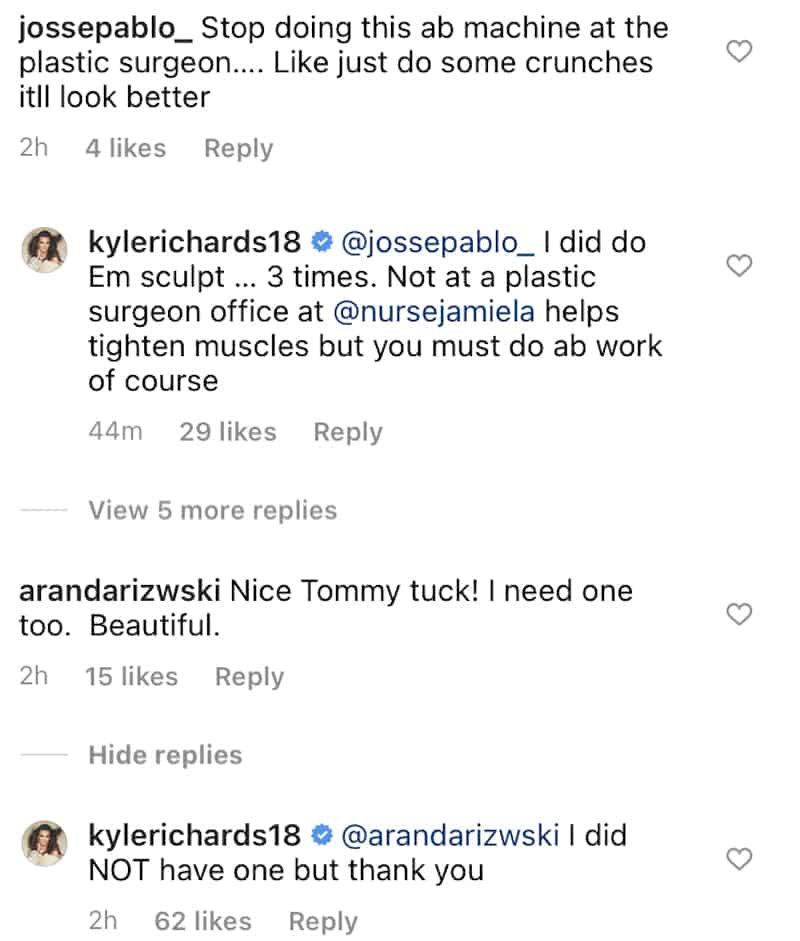 “I did not have a tummy tuck,” Kyle again noted. “If I did I would be happy to share. I have been doing 15 minutes of ab work every day on top of my regular workout. I had to get in shape before wearing a bathing suit on camera in Turks and Caicos.” 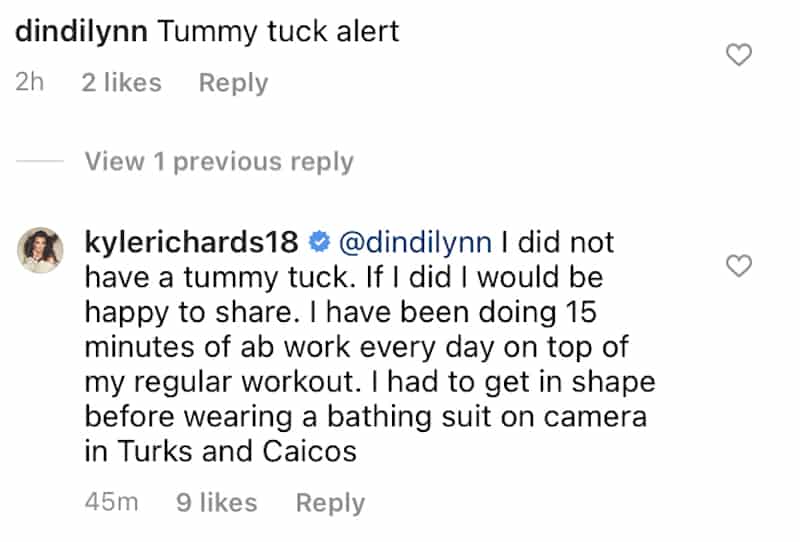 As Kyle attempted to get attention from Drake on her page, RHOBH newbie Crystal did the same on her Instagram account by sharing a GIF of herself on the show.

“Not me feeling disappointed that Drake still isn’t following me,” she wrote. “Where you at [Drake]??”

“Me either .. we need to ‘up our game,'” Kyle wrote in response to her castmate’s post.

“I saw that hot photo you just posted. You’re much closer for sure,” Crystal noted.

“I will be sooooo jealous if you get that follow and I don’t,” Crystal replied.

Mercedes “MJ” Javid, of Shahs of Sunset, also weighed in on Kyle’s attempt at gaining a follow from the rapper by suggesting she show him her signature split.

“Did you tag him in SPLITS to get the follow, [Kyle Richards]… He’ll love it,” she suggested. 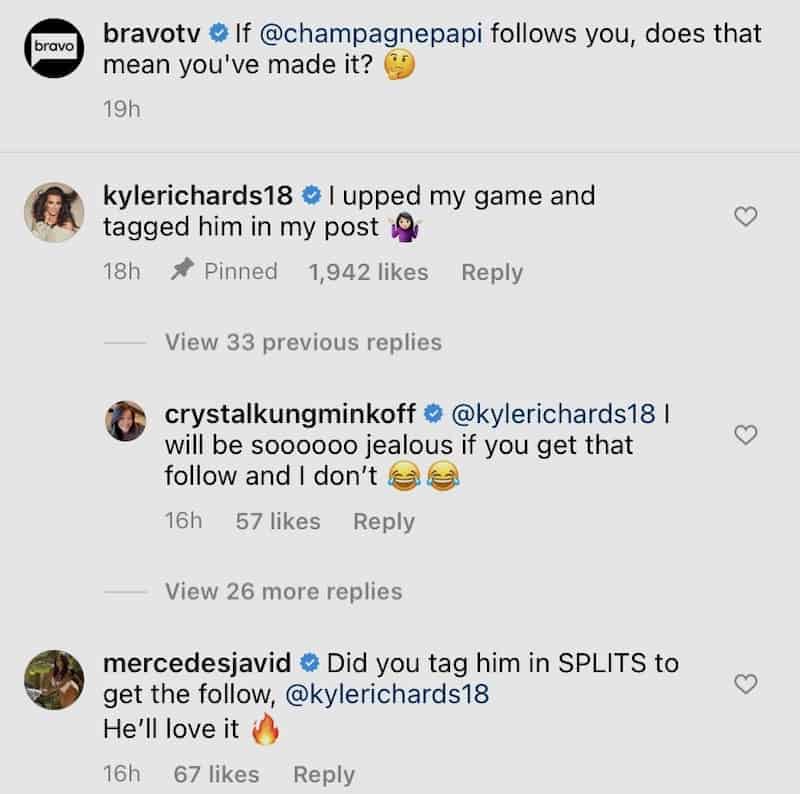