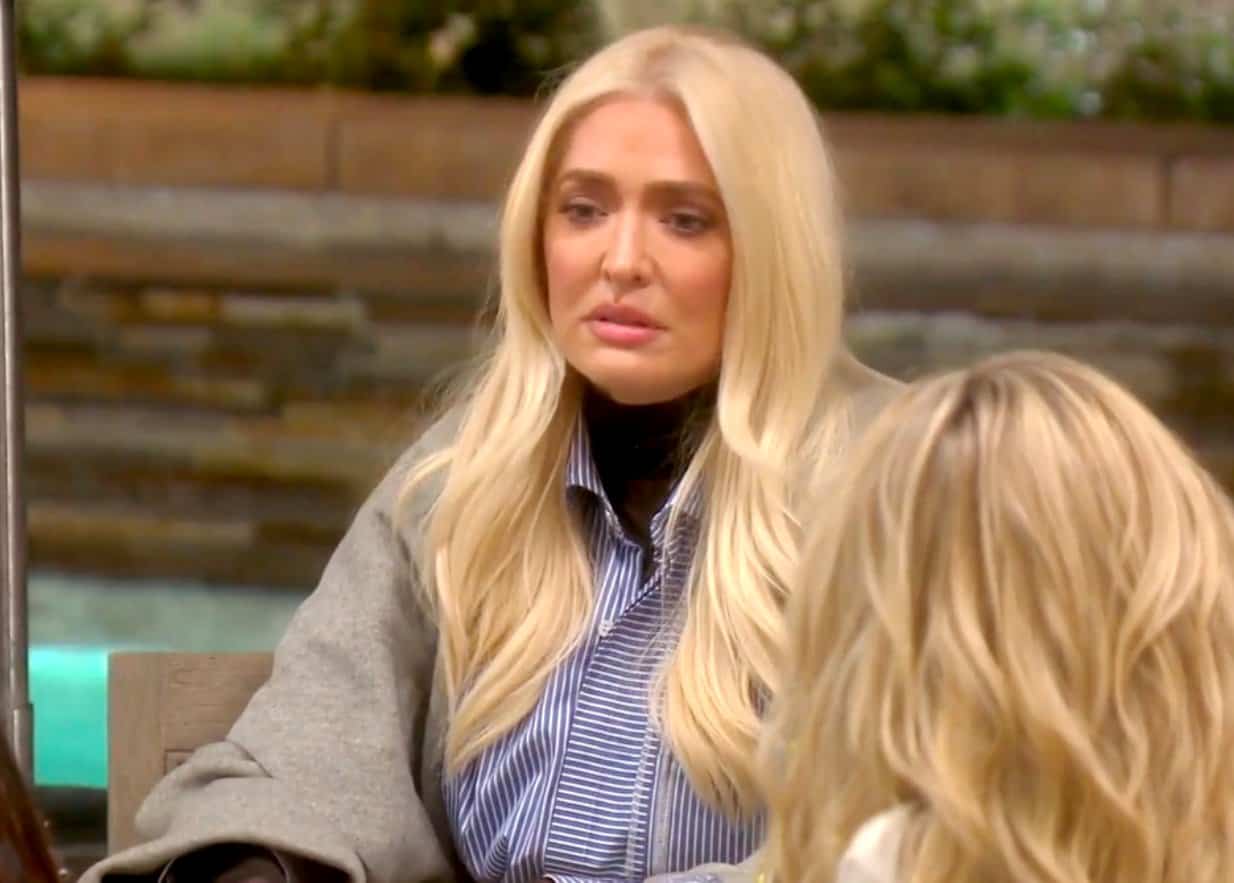 On this episode of Real Housewives of Beverly Hills, a trip to the desert sounds like a good way for these women to relax, recharge, and step away from life at home. For some, that means leaving little ones and husbands, but for Erika, the life she is escaping is much darker than anyone could even imagine.

Freshly COVID-free, Kyle has decided to host the women at her La Quinta home. She is hoping that it will be a welcome escape for Erika, who is saying goodbye to more than just her marriage these days. Erika has been forced to walk away from her “clubhouse” now that she is no longer financially supported. Saying goodbye to that place seems like it was harder for Erika than it was leaving Tom Girardi. She claims she is on a budget (poor Erika), but she states she can still take care of herself, despite not receiving a dime from Tom. Erika goes on to remind us that “everything comes to an end,” and really, ain’t that the truth, Erika.

Kyle is excited to show off her house visit with the ladies, but she is sad that Garcelle, who is filming “The Real” instead, will be missing out on night one in the desert. Kathy, Dorit, Sutton, and Rinna will all be shacking up in Kyle’s beautiful home; however, Crystal, Garcelle, and Erika will be staying at a nearby hotel. Crystal obviously needs locks (and a bedroom door excessively far away from Sutton), and Erika needs privacy as she works through her rocky divorce.

Kathy deserves a medal for driving herself two hours (lol), and as all the women unpack and begrudgingly carry their own luggage to the appropriate rooms, they wonder if Erika is really going to show after the day she had with Tom. Erika had to appear in court earlier and Dorit shares some information she caught up on from Page Six.

The government froze all of Tom’s assets because “at least two million dollars was used inappropriately.” Rinna doesn’t understand how a person couldn’t touch their own money, but Dorit knows how scary it can be as she had her and PK’s assets frozen a few years back. Dorit pulls up the article and reads out loud that funds are nowhere to be found for orphans and victims of lawsuits. Crystal can’t imagine that Tom is in all of this legal trouble over a mere two million dollars as, “two million dollars is a very insignificant number,” according to her. It doesn’t seem to be adding up, but there is hope that the truth will come out since Erika confirms she is coming to hang with the women in a bit.

Kyle is busy whipping up her “famous” lasagna (so famous that her own sister, Kathy, never even had it before…). Kyle blames that on the fact that there was a big chunk of time when things were not great between her and Kathy. Kyle is grateful their relationship is back on track, and Kathy is happy she gets to now have this damn lasagna. Not sure why Kyle always insists on cooking for these women. Let’s hope the lasagna turns out better than the salmon…

Finally, Erika makes her debut at Kyle’s house.  She gets greeted and allows them to hug her while she looks in pain — er… about to cry. Seems a little like a soap opera when Erika blurts out, “It’s not OK and it’s not gonna be OK for a long time.” Yet, she looks like she spent four hours in hair and makeup…curious… Even more curious is how she does not say one time, “OMG, this guy took orphan money?!” It’s always about Erika…

Erika plops down and prepares her audience for the inside scoop on what happened during this federal case being held in Chicago. Erika begins by saying that Tom’s “attorney feels that he is not mentally well.” Erika is happy to hear this because just in the past episode she claimed Tom has been unraveling over time.

Dorit confirms that it is normal for a wife not to know all of the business skills in a family, and Erika is tired of being called a “financial mastermind” with a sham divorce by the tabloids. Kyle equates Erika’s marriage to Tom like a father/daughter arrangement, in the sense that Tom made all the calls and Erika didn’t really question anything.

Sutton is a woman who can understand the pain Erika is going through, especially during the Christmas season. Sutton shares that her father shot himself two days before Christmas. She reminds Erika that rituals keep those going during difficult times. Even though Sutton’s mom has made it clear that she does not miss her husband one iota, Sutton explains that she likes to talk about her father to make him still alive in her life. Sutton tries to liken the traumatic death of her dad to Erika’s sh*tty life at the moment, and Erika actually seems pretty grateful for the moment.

At least Kyle realizes that all of her cooking is for naught: “I’m going through all of this and no one here even eats.” Is it me or has Kyle been cooking this lasagna for four hours? When she breaks the glass and Kathy calls Kyle “ADHD…hijk” as she grabs the grill brush to clean, I am losing it. More Kathy!

Side note: Hello, Champagne Papi (rapper Drake) following Rinna and her not knowing it? Come on. You know Rinna dances just for him!

The ladies sit down to dine on Kyle’s lasagna (finally), and Kathy shares that the night’s lunar eclipse is a great opportunity for Erika to let all of the bad vibes out of her life. I love how this group blindly follows Kathy and all of her loony ideas.

Because Kyle likes to ask the questions we are all thinking, she wants to know what is going to happen to Erika Jayne. Erika states she is not sure, as it is an “expensive business.” I’ll say. Erika has been watching her wallet, especially now with the potential denial of spousal support; however, when Erika says, “I don’t know if there’s anything to get,” a few eyebrows go up. How would you know that, Erika? Simply from the frozen assets?

Erika further states that Tom should turn in his bar card because he is “not well.” Erika claims that Tom was “mean as f*ck” and feels that it is because Tom felt like his mental state was slipping away. Erika shares that the car accident Tom was in three years ago was the beginning of the end for him. Erika drops a bombshell and tells the women that the car accident was way worse than she had previously shared.

According to Erika, Tom was unconscious for 12 hours due to a head injury. ALLEGEDLY, Tom drove off a cliff. Erika then states that when Tom finally came to and called her, she asked where he was, assuming he was just with some other woman. WELL, THIS IS A TALE. Between Dorit’s facial expressions and Erika’s never-ending details, now I definitely feel like I am watching a soap opera. And really, how did this traumatic of an accident manage to stay out of the headlines?! Interesting how easily these ladies believe Erika, whereas last year they basically had Denise on trial. #ownit. This may be the only time I am with Sutton, but Erika, this story is messy AF.

Erika tells the group, “You guys have no idea what I’ve been living through. What I’ve been going through.” Kyle confirms that she has heard rumors that Tom was cheating, and Erika shares that she found text messages and pictures on Tom’s phone. Erika further states that Tom was sloppy about his affair and he would not even bother to hide it. She didn’t leave Tom before because “where would she go?”

Cliffnotes of that story: Tom drove off a cliff. Had a longtime affair. And stole millions. Also. Erika has only decided to leave Tom NOW, despite all of the other things, because she fears he has dementia. Right.

Sutton calls this divorce something out of a movie and attempts to lighten up the tone by bringing out pancake cake (which looks incredible). The mood changes to jokes and lighter topics, and let’s be real, it wouldn’t be an episode without Rinna mentioning Scott Disick dating her daughter. Looking forward to seeing what day two in the desert brings…